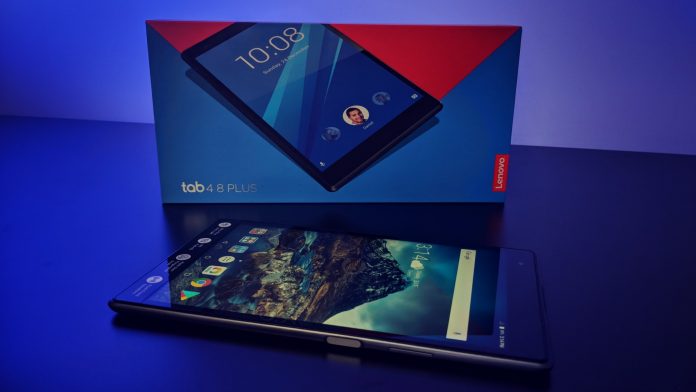 When it comes to tablets, we find that we’re just not quite as excited about them as we were a few years back. Likely due to a number of factors, it’s hard for us to justify needing a tablet. Sure, we think we want them, and some of us really do. But, by and large, consumers seem to shy away from standard tablets in 2018.

When you can get a Chromebook that runs both Chrome OS and Android, the notion of a 2-in-1 seems more alluring. And, why not? We’re talking 10-inch displays or larger, and tons of flexibility on both the hardware and software fronts.

Even on the smaller side of things, at the 7-inch and 8-inch size, we are almost content skipping. In the days where we had 4-inch phones, a small tablet made a big difference in viewing size. But, now that screens routinely push 5.5-inches and above, it’s hard to justify the cost and added hardware in a smaller tablet. 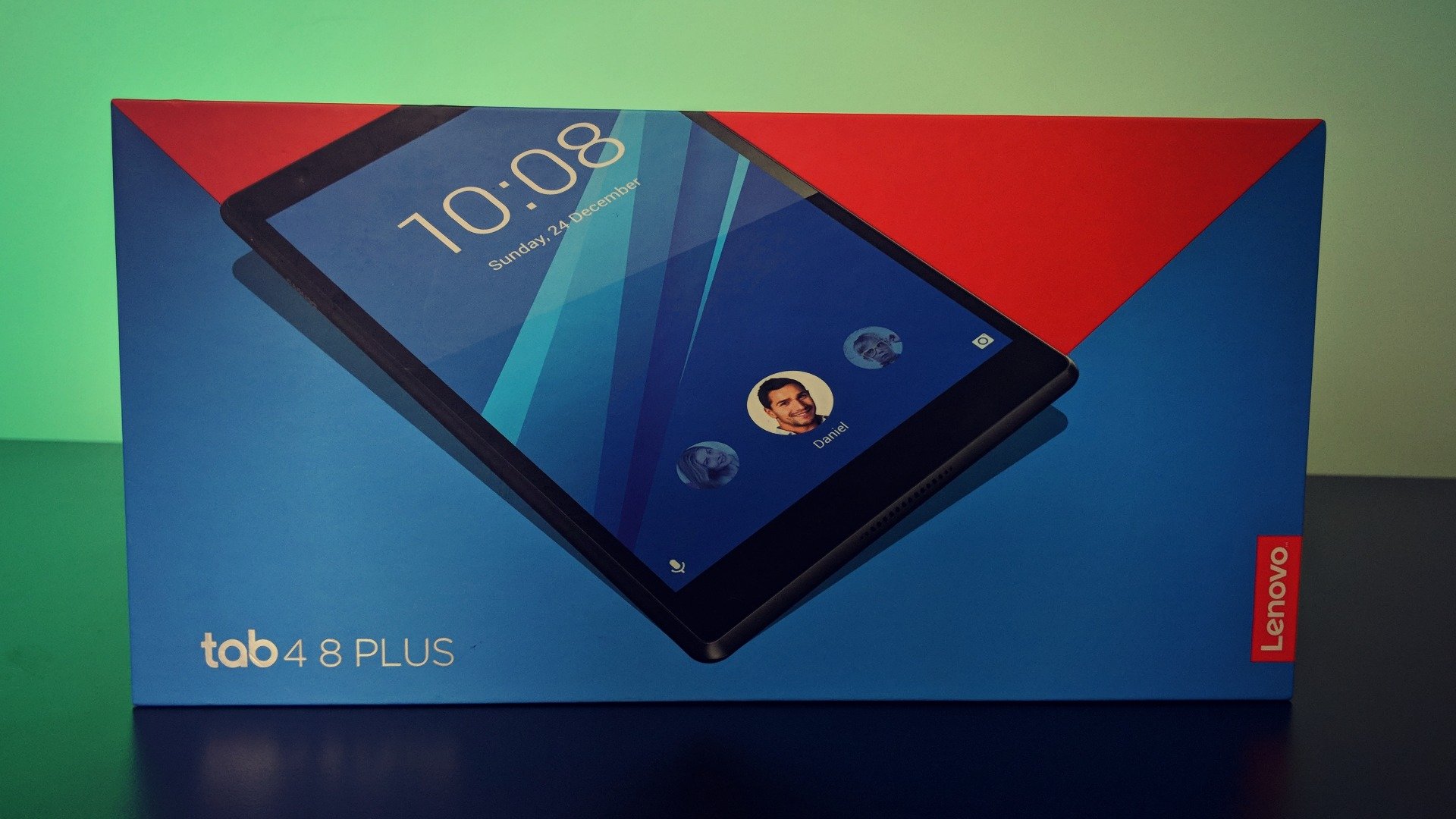 Taking this further, it’s hard for a lot of users to justify a tablet of this size outside of what Amazon offers in its Fire models. Not only are they more affordable, but they tend to do everything we need. For many, this means Facebook, Netflix, email, magazines, and gaming.

With that said, there’s still a market for competing products in this space. One such model, the Lenovo Tab 4 8, seeks to fit that bill. At $130, it’s a well-received device that seems to be worth its asking price.

We’ve had the privilege of reviewing it slightly enhanced sibling, the Lenovo Tab 4 8 Plus. Goofy and wordy name aside, it’s a nifty unit; we’d like to share our thoughts on the experience.

Though it bears a striking resemblance and shares a number of hardware specifications with the Tab 4 8, this Plus version is noticeably different in one are – LTE connectivity. Indeed, it’s equipped with support for most (no Sprint) wireless service providers. It’s largely that that merits the inflated price when compared to other 8-inch tablets. 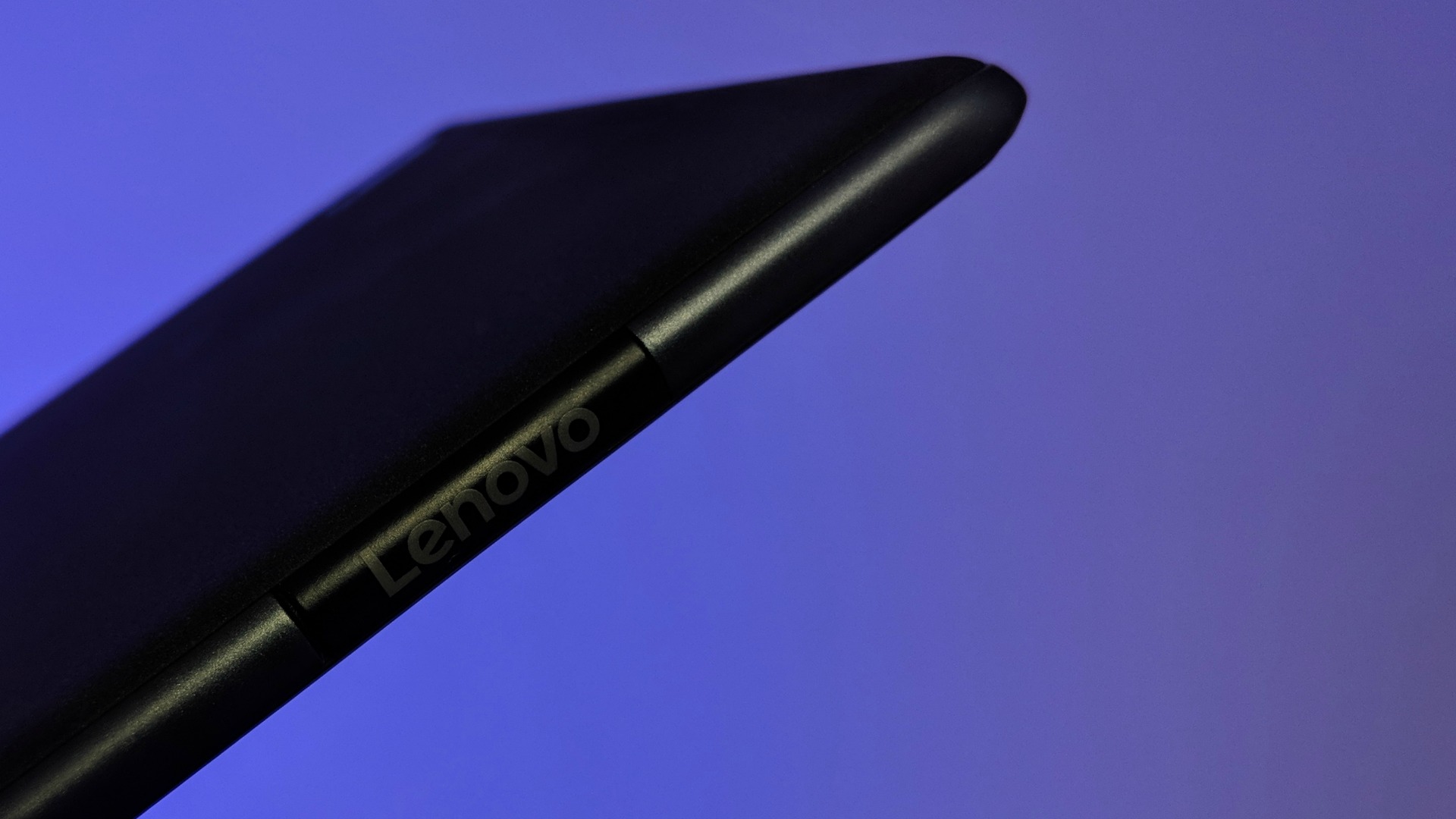 Priced as low as $229.99, the tablet is solid, comfortable, and feels like a well-built product. The rounded corners and matte black finish aren’t anything new, but they work well here. The size is just right for single-hand usage in both portrait and landscape orientations. It’s thin and light and we found it travels easily.

There’s nothing fancy in this model; it’s not pretentious and doesn’t try to mask performance with sexy build materials. We shouldn’t expect much at this price point and Lenovo understands this.

We liked the 1920 x 1200 for this size screen as we anticipate plenty of video watching on Hulu, Netflix, or YouTube TV. Picture is clear, sharp, and vibrant without being punched up or oversaturated. Reading text in emails, social media, and websites was pleasurable; this is likely our favorite size for portable media consumption.

We might have preferred less bezel around the screen, both on sides as well as the top and bottom. For us, it’s a case of “once you see it, you can’t stop seeing it”. Fortunately, we were able to tune this out most of the time we used it. 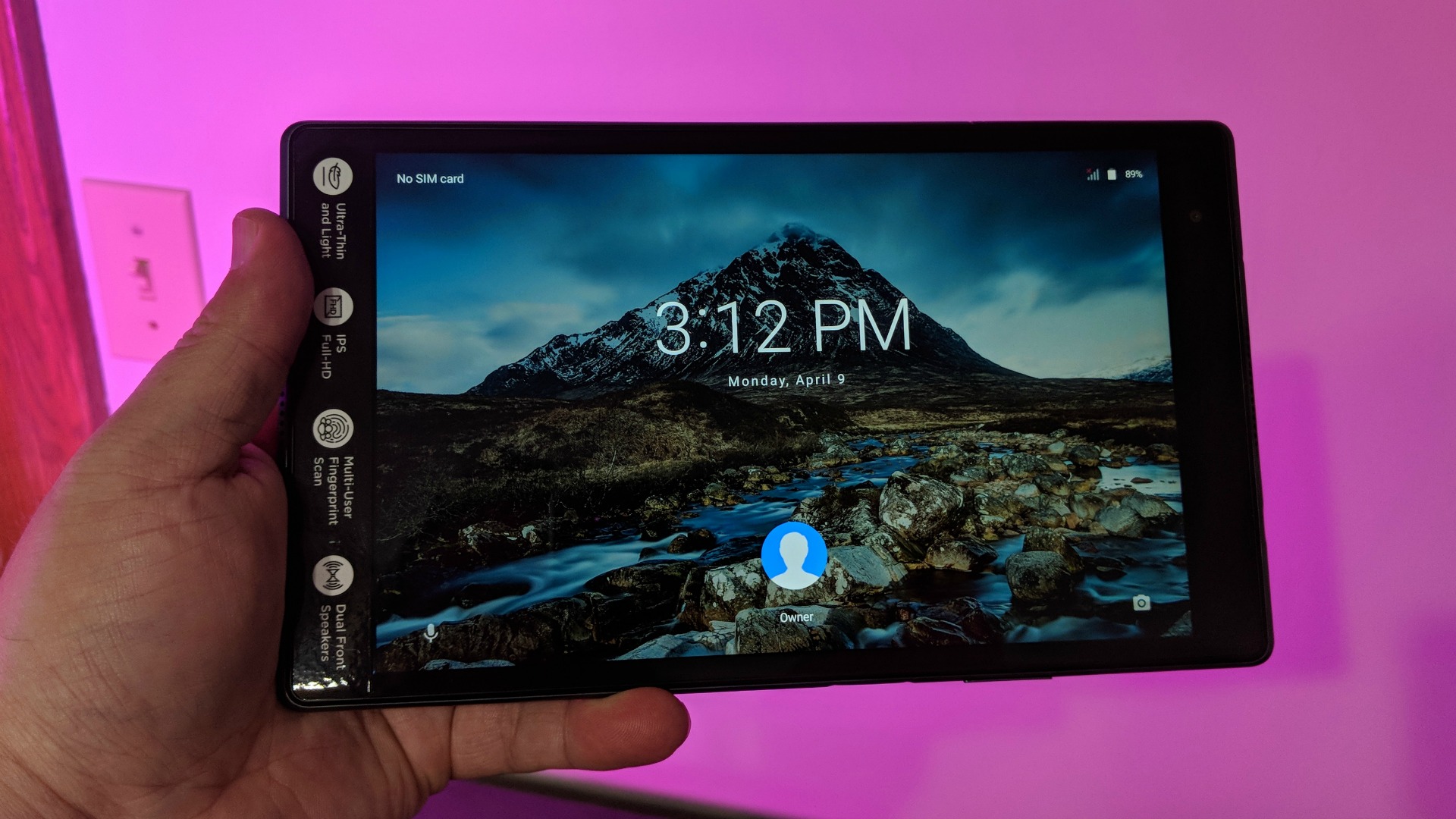 The two front-facing speakers feature Dolby Atmos technology and are loud and clear. Maybe we’re just used to what we get from phones but this sound was more robust than expected.

The power button and volume buttons can be found to the right of the tablet when held in portrait mode. Conveniently, the power button also doubles as a fingerprint reader. This is particularly helpful for devices that are shared in an environment.

The last thing you want is someone picking up the tablet and making a purchase on your dime or dipping into apps where they don’t belong. Android makes it so tablet users can have their own accounts with passwords, settings, wallpaper, apps, and social media accounts. The fingerprint reader is a nice roadblock to keep the wrong user out of your space.

The Snapdragon 625 processor, paired with 2GB RAM, won’t set any benchmark records but it gets the job done. We found the tablet performed admirably in most cases, though it didn’t seem to love it when there were multiple apps and games open at once. There were no major stutters or forced closes but it seemed to slow ever so slightly.

To us, at least, tablets are more of a consumption device and not so much of a productivity or gaming rig. Sure, they can do those things, but it’s not the most pleasurable experience. If you’re looking for high-octane portable gaming, go for a console like the Nintendo Switch. If your needs necessitate turning out hundreds or thousands of words a day over email, docs, and messaging, spring for a 2-in-1 like a Chromebook. 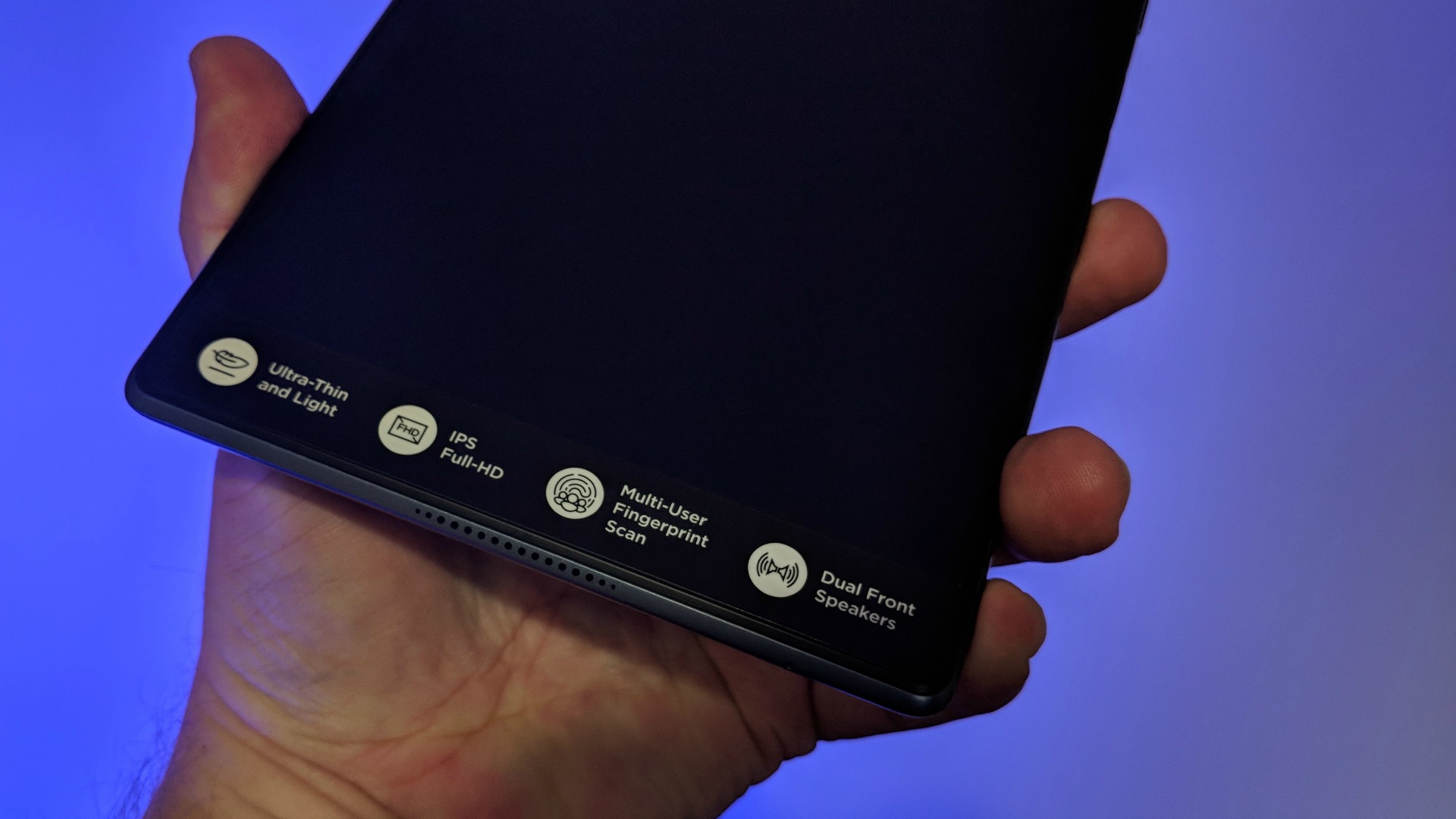 With that said, the Lenovo Tab 4 8 Plus handled day-to-day tasks like a champ. It was only when we looked for the boundaries of performance that we started to find them. Most of the target demographic wouldn’t take issue with how this fares on an average basis.

The 16GB of storage space is a little on the lower end in 2018 but at least there’s a microSD card slot for up to 128GB of additional room. It will depend on how much media consumption you do versus gaming and downloading of files as to whether you might want to consider a microSD card.

Say Cheese, if You Must

The Tab 4 8 Plus features a 5-megapixel fixed-focus camera on the front and an 8-megapixel auto-focus rear camera. Both are average and work in a pinch, but we’d suggest using the one on your phone instead. Besides, nobody wants to watch you stand in a crowd and shoot graduation videos with your tablet.

In all seriousness, the front one is perfectly serviceable for video chat and a quick selfie at the coffee shop. The rear camera does feature a number of shooting modes to help with various situations; it’s capable of 1080p HD video recording.

The tablet’s battery source is a 4850mAh unit, which gave us a good 8-10 hours of usage each time. Results will vary based on whether you’re using LTE and taking the tablet out and about, of course. With that said, the device charges up rather quickly with the USB Type C charging port. 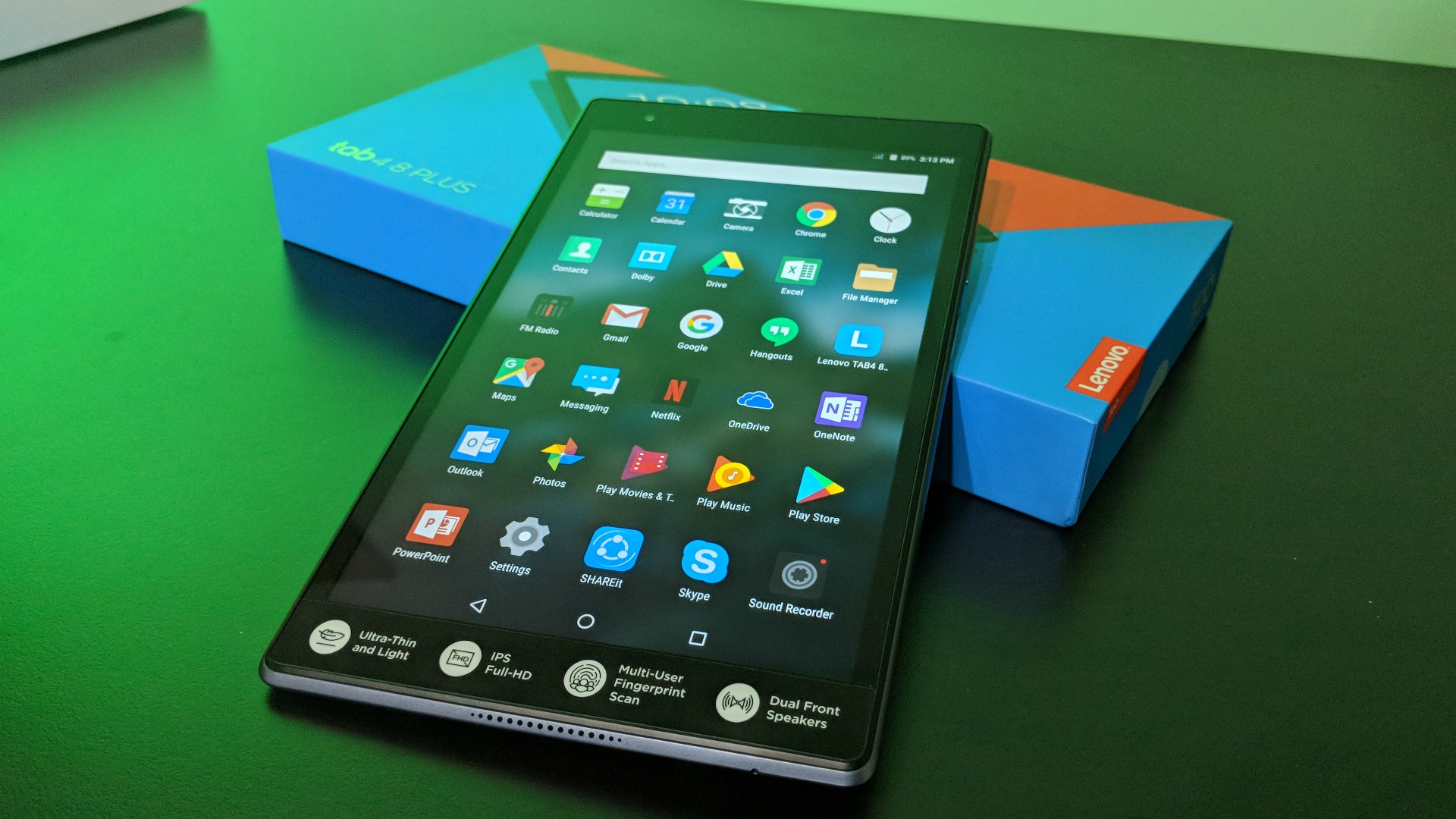 Though it runs an older version of Android at 7.1 Nougat, we were pleased to see it was predominately a stock experience. Outside of what Google gives us there are just a handful of Microsoft Office apps, FM Radio, File Manager, Sound Recorder, and a couple of extras. Because the tablet is sold on its own there are no carrier apps or bloated, branded services.

The Tab 4 8 Plus is compatible with the Lenovo TAB4 Home Assistant Speaker, an Echo-like speaker add-on. In essence, the tablet docks into the speaker and turns into an Echo Show sort of experience. You’ll pay about $80 for that unit.

We liked our time with the Lenovo Tab 4 8 Plus. Did we love it? Not quite, but we didn’t set out thinking that we would ahead of time. It’s a perfectly good tablet for a family or small office. As to whether you necessarily need the 4G LTE connectivity depends on your situation.

To us, it might make more sense to pick up the standard Tab 4 8 and save the money. You’ll lose screen resolution and camera quality, but that may be a non-starter for some. We’d be just as content sharing our mobile hotspot with the tablet when the need arises if it ever does. 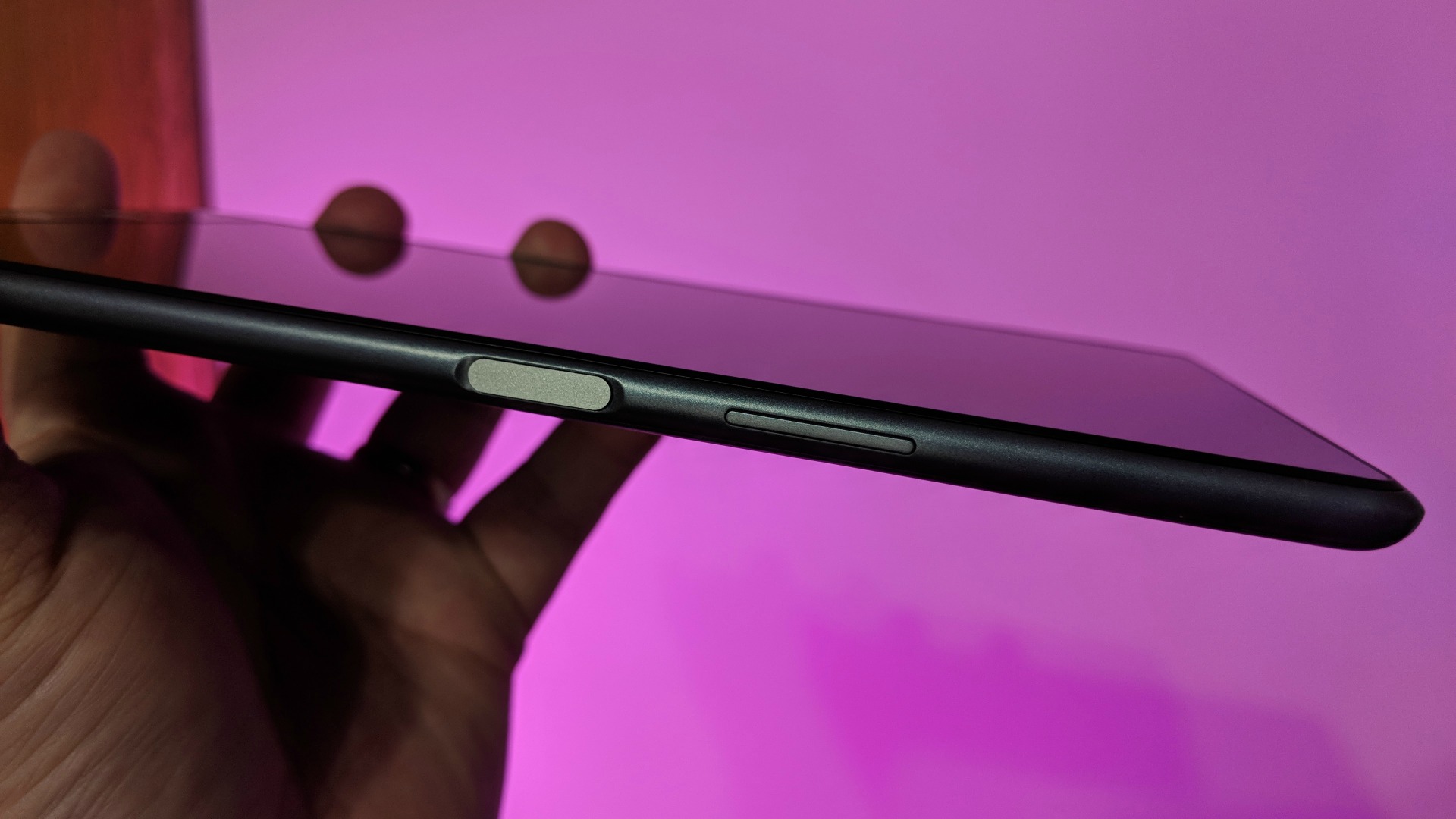 We can understand how appealing a Fire tablet might be, especially when your starting criteria is cost. But, keep in mind you’ll also get the official set of Google apps and the Play Store. That’s a big deal for some of us, especially if you’re already in the Google ecosystem with Drive, YouTube, Gmail, and more.

You can learn more about the Lenovo Tab 4 8 Plus at its official website; you can also purchase the tablet directly for $229.99. Head to Amazon and you’ll find it going for around $215 right now.