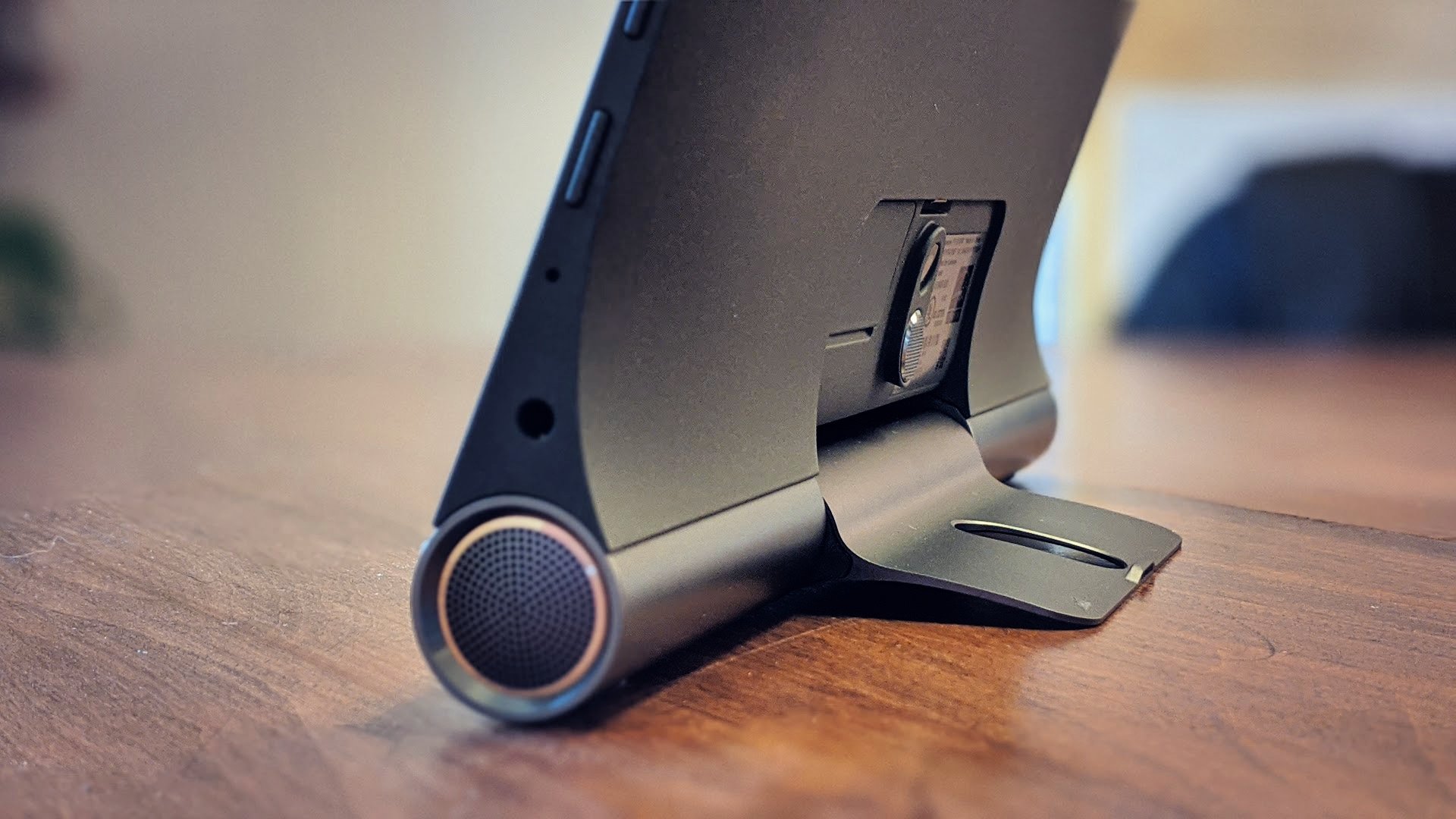 Think back five or so years to when phone screens were pushing into 5-inch displays. Tablets were still popular and the larger screens were great to have for reading, editing, markups, and writing.

Today, as handsets routinely hover above 6 inches, it’s kind of hard to justify the need or money for a tablet under ten inches. Why drop a few hundred bucks on something that’s not all that different?

As tablet sales have seemingly plateaued, 2-in-1 devices and Chromebooks have picked up more traction. These offer a more unique experience — often one that lends itself to productivity and multi-tasking. 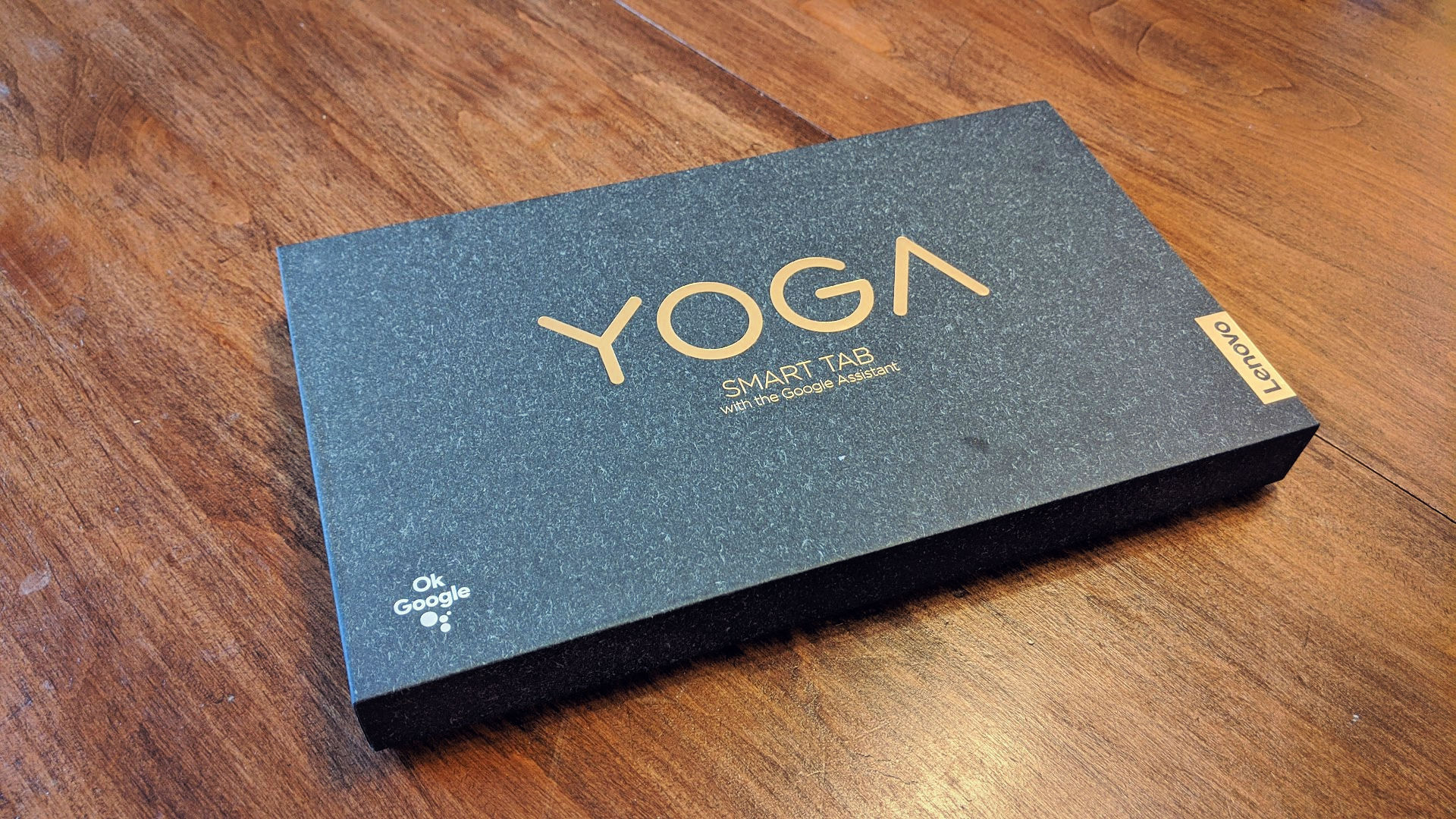 Devices are more appealing when they offer more than just a bigger display. Thankfully, we’re starting to see hardware makers play around with different designs again.

The Lenovo Yoga Smart Tab is the sort of product that puts Android and Google Assistant support in a body that’s more versatile than a traditional tablet. It might resemble a conventional 10-inch tablet on its face, but there are a few hardware designs underneath that put it in a slightly different space.

We’ve had the chance to spend time with a Lenovo Yoga Smart Tab and are happy to share our impressions and insight into the device.

What is the Lenovo Yoga Smart Tab?

Powered by Android 9 Pie, the Yoga Smart Tab has a 10-inch display at 1920 x 1200 pixel resolution. Internally, the Qualcomm Snapdragon 439 (octa-core) processor is supported by 4GB RAM with storage coming in at 64GB. 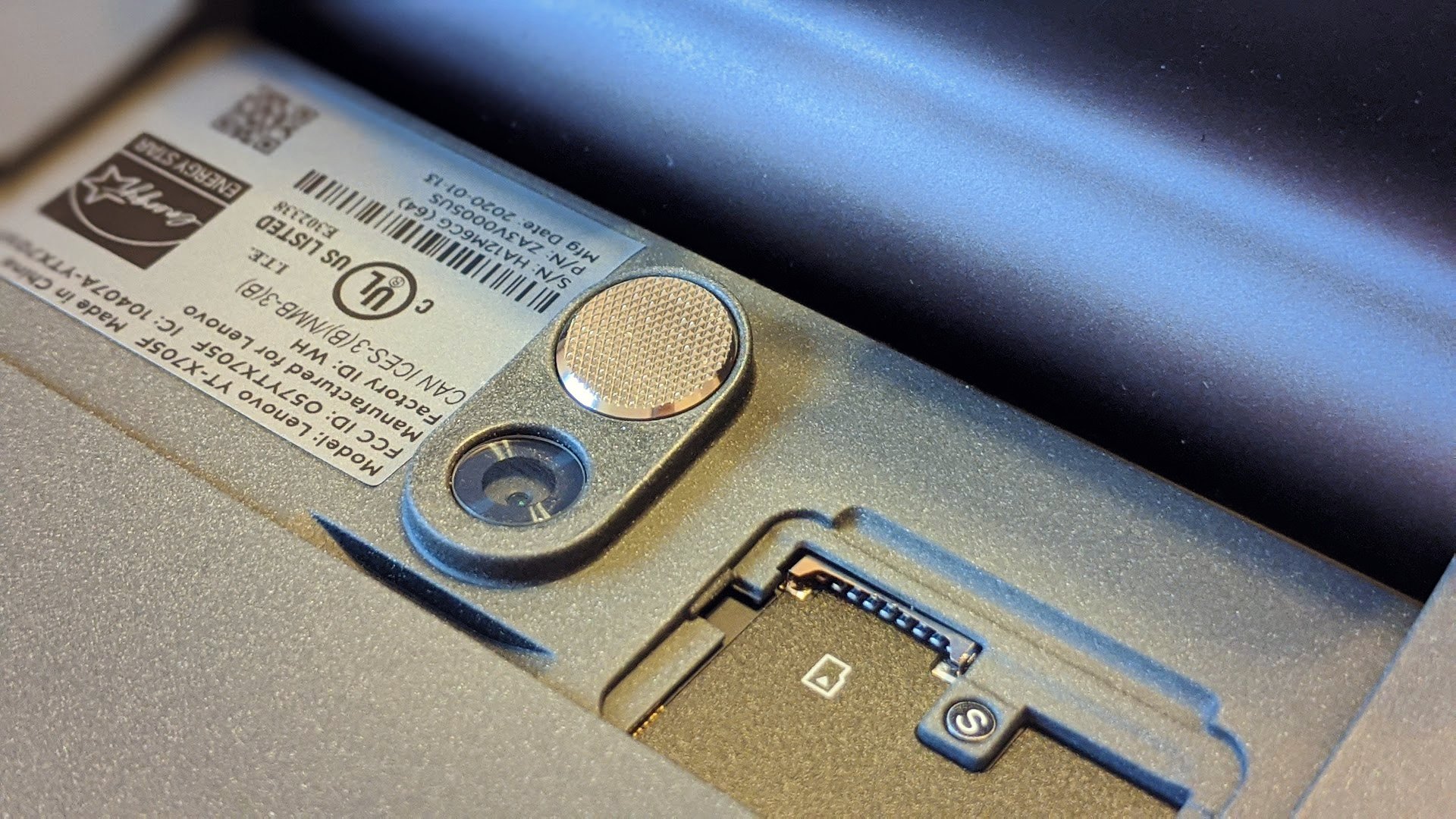 A 7,000mAh battery promises up to 11 hours of web browsing or up to 10 hours of 1080p video playback. In terms of cameras, the Lenovo Yoga Smart Tab has a rear 5-megapixel shooter with fixed focus; the front houses an 8-megapixel camera with autofocus.

Other traditional specifications include USB Type-C charging, a microSD expansion card slot (up to 256GB), Bluetooth 4.2, and a headphone/mic combo. A pair of 2W JBL speakers offer Dolby Atmos support

As to what makes the Lenovo Yoga Smart Tab more unique, however, is the way it houses the hardware. Flip the device over and you’ll find the design isn’t the same platter you’ve seen time and again over the past decade.

The Yoga Smart Tab has a built-in kickstand that allows for four different ways to use it. Users can hold it, sit it so that you can read at a 45-degree angle, stand it on its side, or even hang it on a wall. 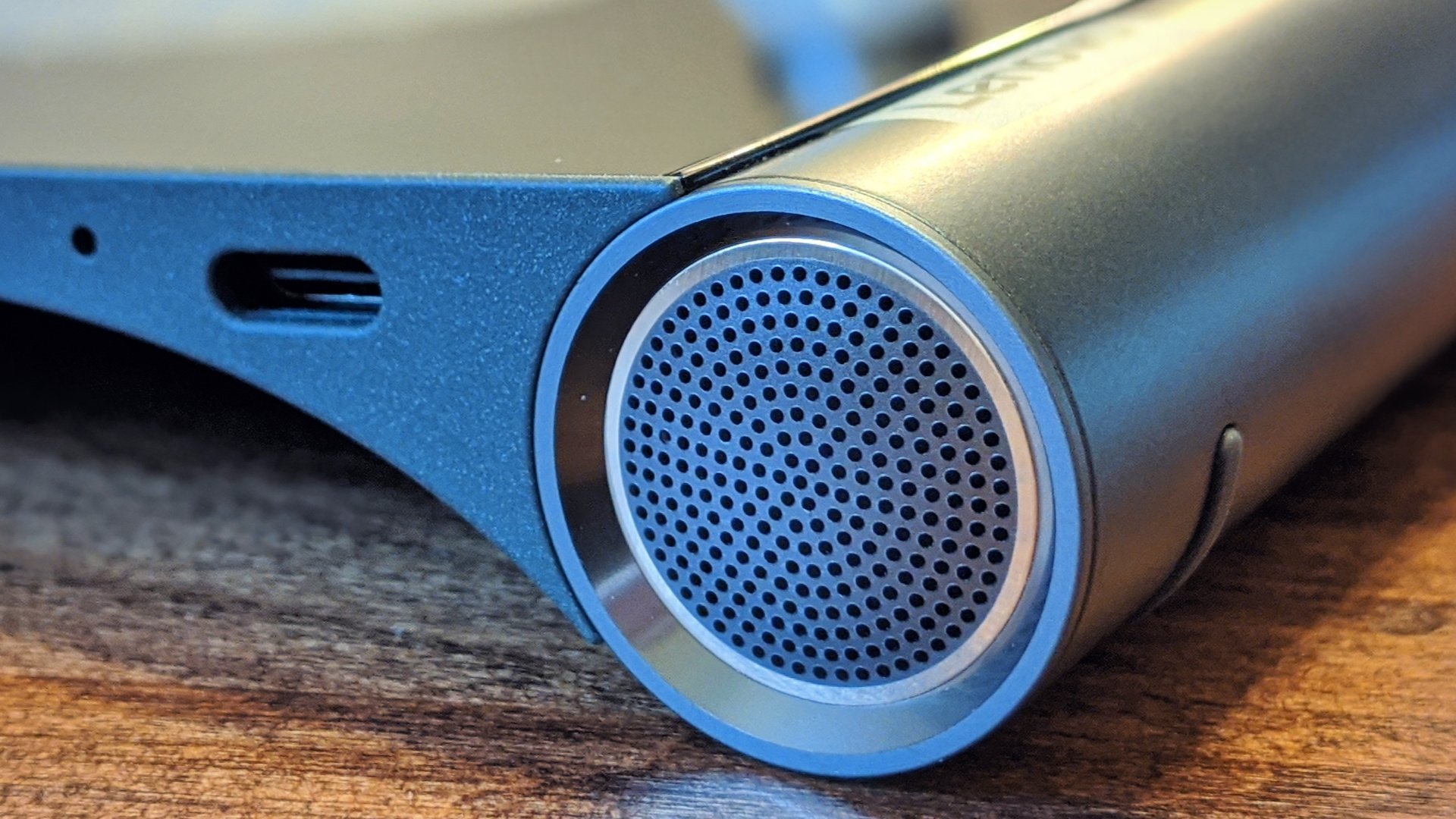 One orientation in particular makes it feel like a completely different product altogether. See, this device has Google Assistant support in it and comes with an ambient mode that essentially turns it into a smart display. Indeed, it’s not unlike how a Nest Hub or Lenovo Smart Display functions. It’s just that here you can pick it up and use it as a full-fledged tablet.

The unique design also gives Lenovo an opportunity to play with the placement of the speakers and audio experience. As such, there are dual JBL HiFi speakers, optimized by Dolby Atmos on the ends of the thick side.

How is the build quality of the Lenovo Yoga Smart Tab?

Imagine that you’re reading a magazine and want to hold it with just one hand. What do you do? You fold it over on itself and grip it by the thicker edge, right? That’s more or less what the design calls to mind. It might look awkward at first blush, but once you start to use the hinge/hook, you’ll appreciate it.

To be clear, this isn’t the first time we’ve seen Lenovo employ a kickstand/hinge/hook. It’s been used in other tablets in the past, but never with the extra smarts that come with Google Assistant. 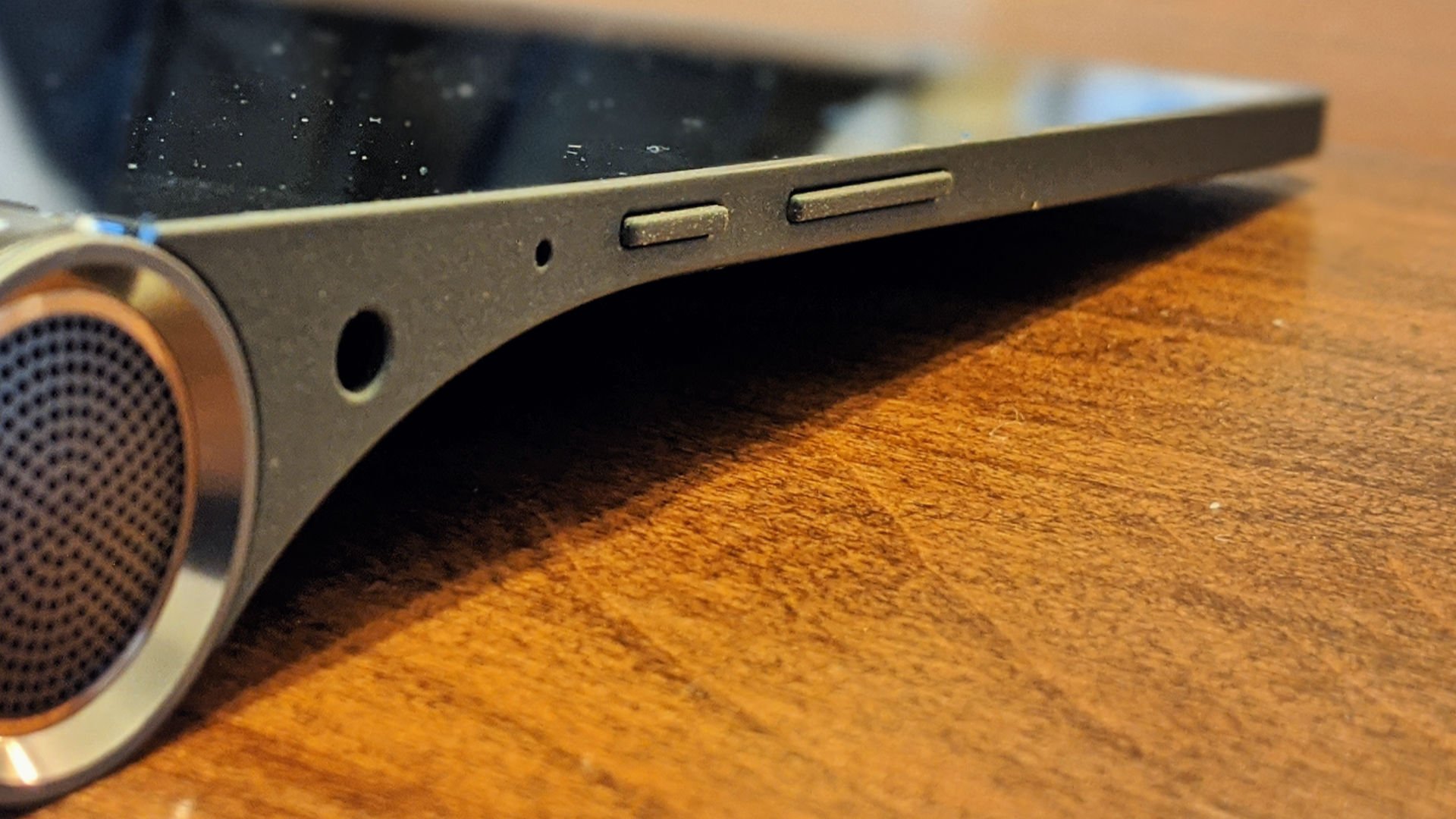 We found the Lenovo Yoga Smart Tab to be built with care and attention. The moving parts hold strong and don’t show any signs of slipping or weakening. In all other areas it resembles a traditional tablet. The buttons are exactly where you’d expect them to be and are quite responsive, with just the right amount of feedback and travel.

The speakers, while large in appearance, don’t get quite as loud as we’d expect. They’re definitely clear and provide an otherwise even audio experience, but you’ll still defer to a portable speaker if you’re looking to play music for a room. YouTube videos and short clips are great, but full movies might be better enjoyed with a pair of headphones.

One design choice we had a bit of a struggle with was the placement of the USB Type C port. While we’re really glad to see that port included here, it’s the physical placement that bothered us. As it’s located on the side, it makes hanging the Yoga Smart Tab a bit wonky.

How does the Lenovo Yoga Smart Tab perform?

More often than not, when we’re not using our tablet, they get powered off and put aside. This device works very well when you’re not actively engaging with it.

Because of its design, and the way it integrates Google Assistant, the Yoga Smart Tab wants to be seen and heard. Much in the way you occasionally glance at your Nest Hub or Smart Display, the Yoga Smart Tab’s ambient mode offers up Photo slideshows and waits for you to task it. 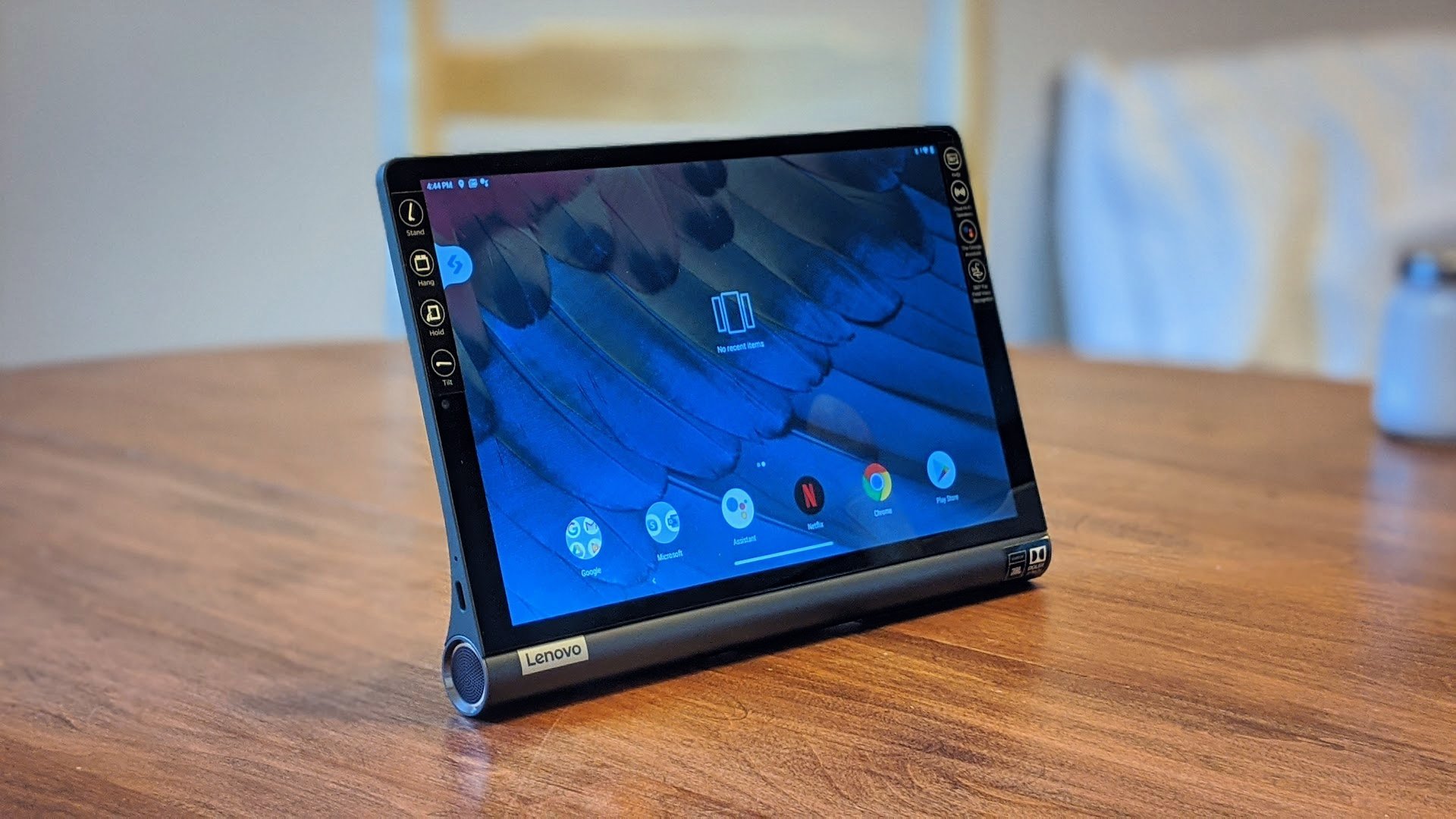 Use the hinge to prop it up on a table or counter and you’ll have a smart speaker and screen that’s ready to leave the house with you. But, getting back to that USB C port…

There may be stretches of days where we don’t need our device to function as a tablet. That’s where hanging it on a wall becomes convenient. It’s like having a digital picture frame in the office or next to the couch.

Plug that power cable in, though, and everything goes off-kilter. The weight of the charging cable makes your digital frame hang crooked. That’s aggravating enough for us to largely avoid that type of usage.

If it’s short bursts, like a few hours at the office, that’s no problem. Come in to work, hang it up, and leave it alone. Or, if you’ve got a place over the kitchen counter, and you want to use it for recipes and walk through videos? Perfect. In our tests the battery was strong enough to consistently deliver 10+ hours of more of typical daytime usage without worry.

You’ll have to jump through a couple of tiny hoops to get the Assistant set up in a way that works best for you. Some of the default settings somewhat contradict other rules. Lenovo could do a better job of walking users through the process, making it a more proactive way of setting up the tablet. 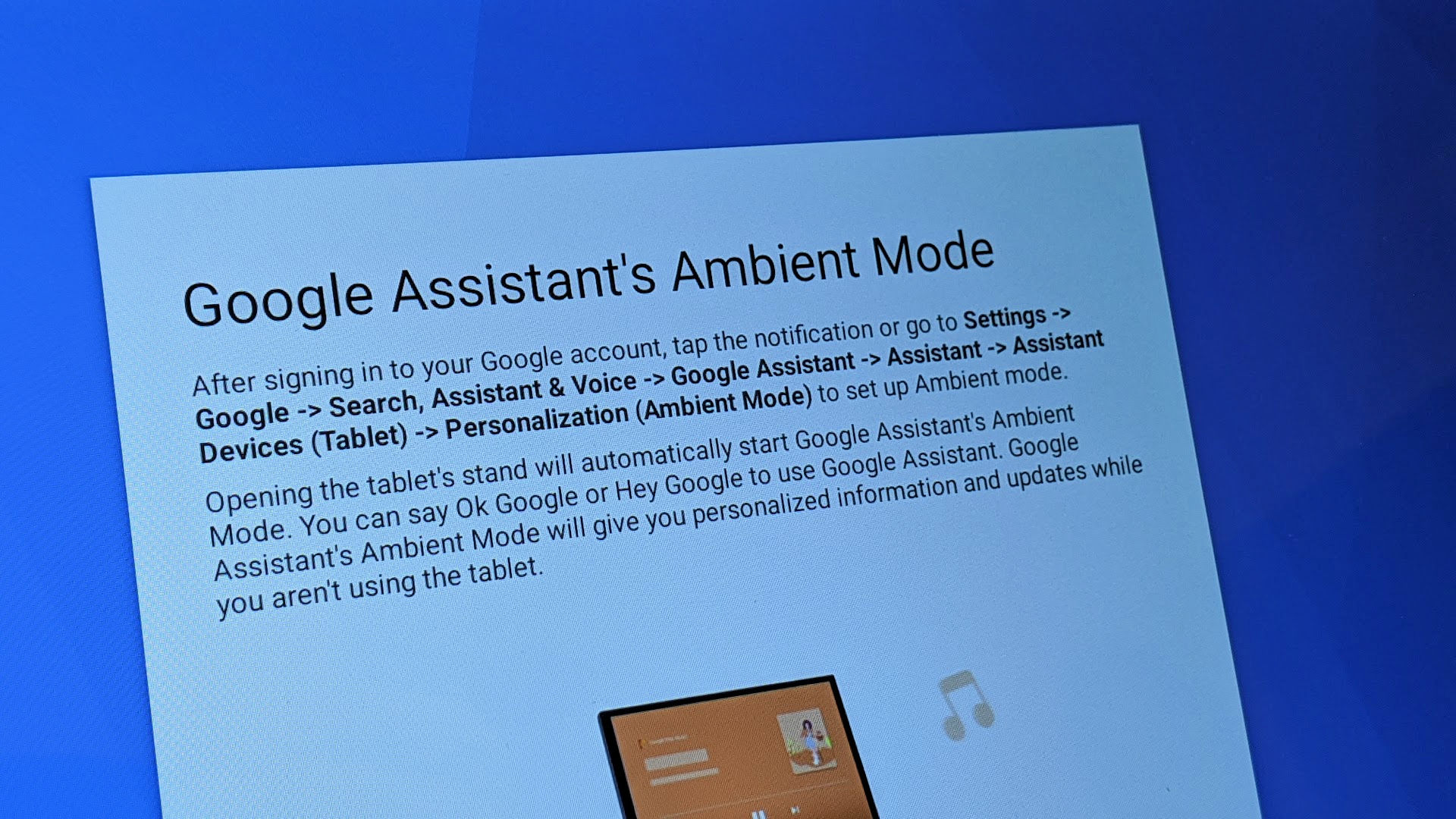 When it comes to hardware prowess, the Lenovo Yoga Smart Tab isn’t designed with benchmarks and performance in mind. The Qualcomm Snapdragon 439 processor and 4GB RAM put it around the lower end of the mid-tier in 2020. With that said, it’s no slouch.

Gaming has never been all that interesting or fun on a tablet. Even with high-end hardware under the hood, tablets aren’t where we game. Casual stuff, and titles that work with occasional tapping, strategy, and turn-by-turn mechanics are fine. Suffice it to say, if there’s a game or app you’re using on a current tablet, the Lenovo Yoga Smart Tab will likely work.

Reading books, email, school papers, and browsing long-form websites and writing is how we find ourselves using tablets. Thanks to the physical design of this one, you can hold it for long periods of time without fatigue. Similarly, you can prop it up at the angle you want for viewing Netflix and other videos.

What do you do when you’re not actively using your Android tablet? Nothing, right? The Lenovo Yoga Smart Tab lets you place it on a night stand or kitchen counter and let it operate as a smart display. That’s pretty damn cool if you ask us.

Using the hinged kickstand you can also hang the Lenovo Yoga Smart Tab on a wall. It’s a perfect opportunity to add another smart display to your home or office. A display that works as a full-on Android tablet, remember.

As a full-on Android tablet it’s more than sufficient for everyday usage. Passive stuff, like reading and watching video requires very little hardware. But feel free to dive into a bit of casual and a more involved gaming as you should be fine here, too. 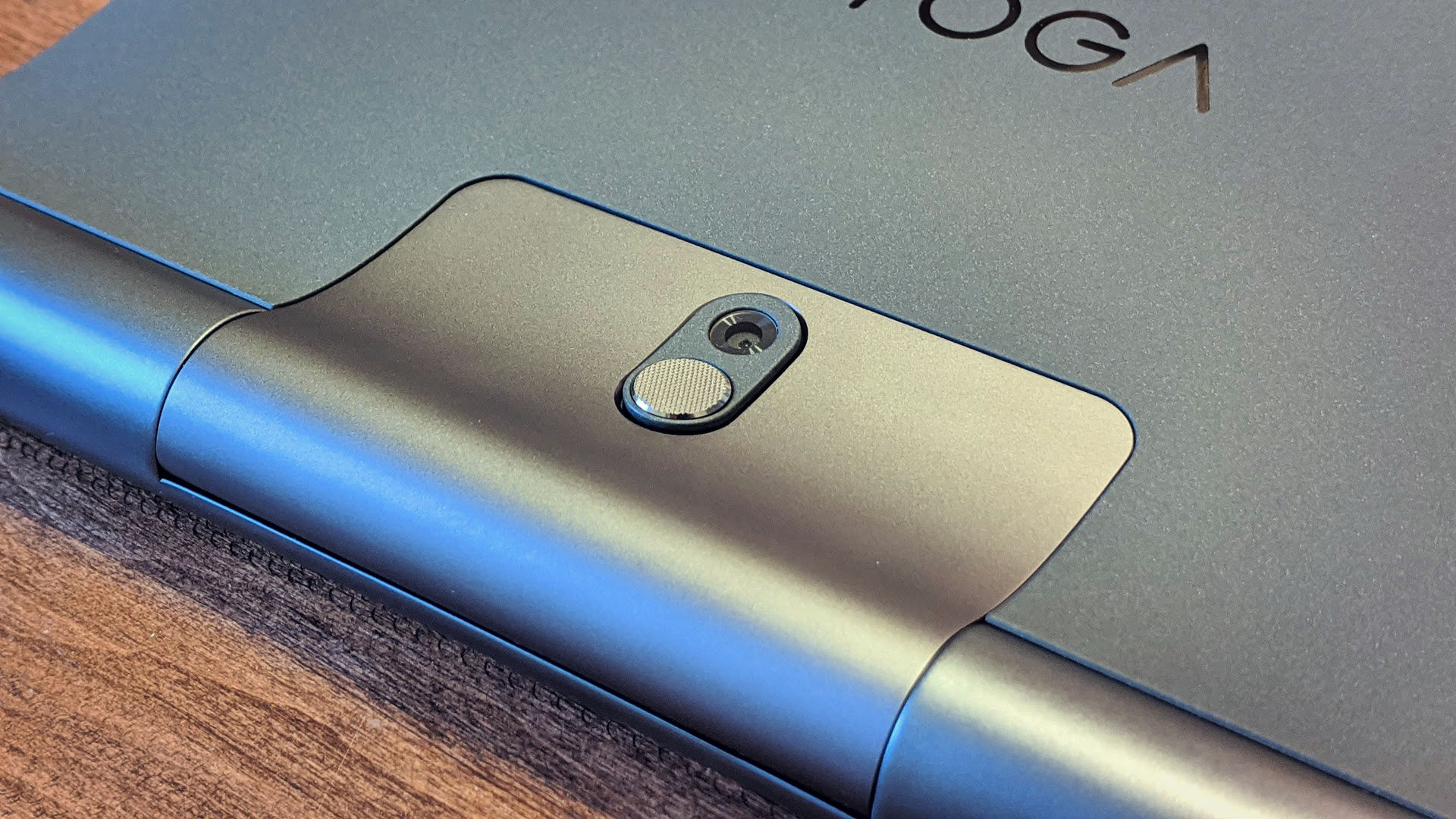 Could you get away with cheaper tablets? Sure, if that’s all you want, go for it. Heck, you can get a Fire HD 10 and likely be content especially if it’s a standard tablet experience you’re after.

The real draw here is the Google Assistant aspect that’s paired nicely with a unique design. You’d likely spend $100 or more for a decent sized smart display, right? Lenovo’s own Smart Display 8″ currently retails for about $90. Here, you get a 10-inch screen that’s not tied to a wall outlet.

Another factor that makes this stand out over Amazon’s offering is the full suite of Google apps and Play Store. There’s just something to be said about having access to anything and everything that Google puts forward.

Is the hardware unique or somewhat of a first-gen approach to something new? Sure. Does it feel like a gimmick or something that others might not embrace? No way. We could very easily imagine somebody else looking to replicate this experience.

The final question is whether it’s all worth the $300 asking price. As there’s no direct competitor in the space, its hard to compare it to what others are doing. But, taken as a whole, and given its intended usage, we have no issues recommending the Lenovo Yoga Smart Tab.

You can purchase the Lenovo Yoga Smart Tab for $300 at Lenovo’s website. Keep an eye open for promos over there as we recently saw it offered for $250 with an included Smart Clock. That’s a hell of a deal.