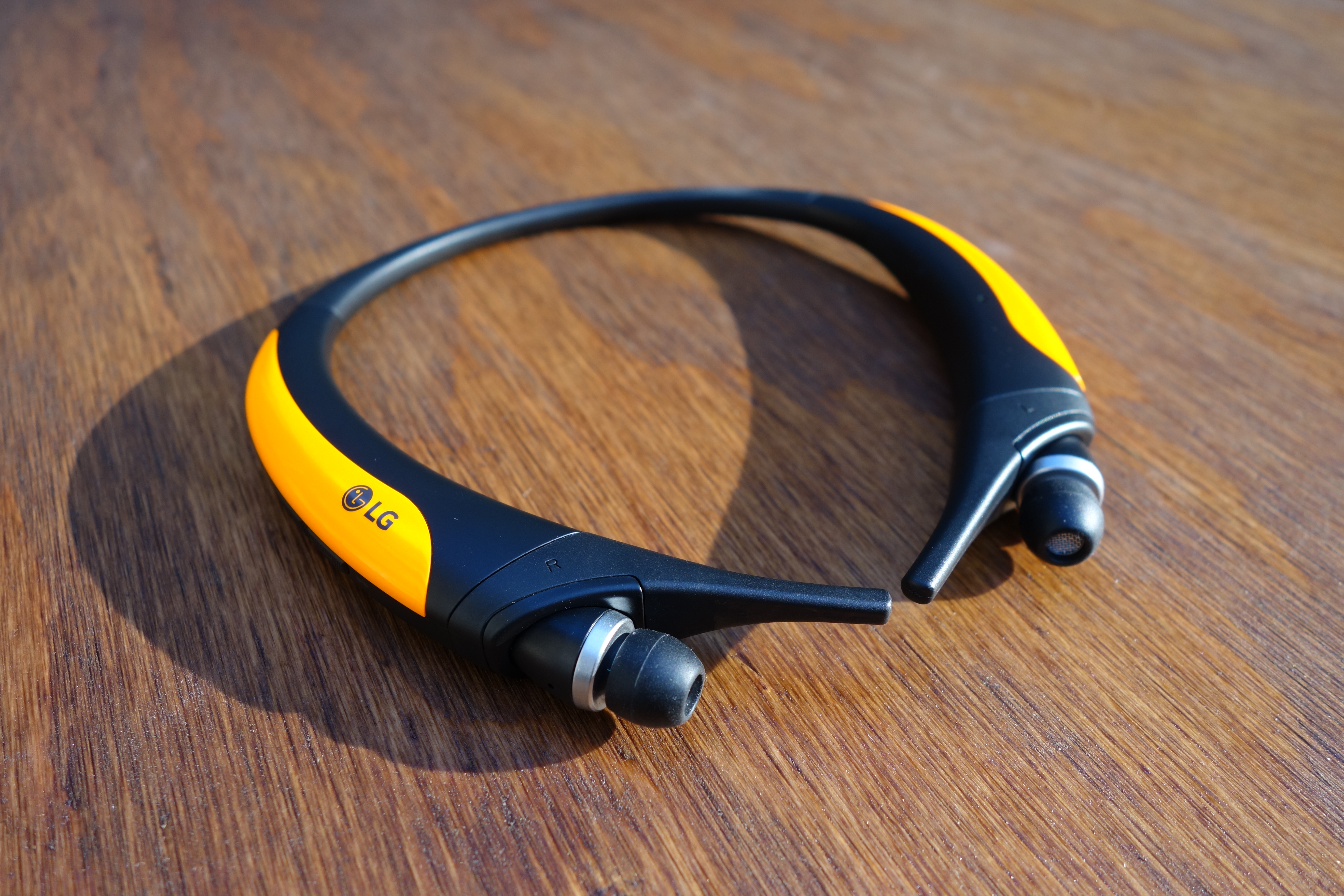 I would say that the emergence of wireless headsets have most benefited listeners who are active. Yes, even when you’re just sitting around, cutting the wire is still a nice convenience. But freeing yourself from cords on your regular workouts is just something else.

LG didn’t want to be left out of the trend. The large-scale manufacturer made sure to position itself in the mainstream audio market with the TONE. With a well acceptance, it moved on to shaping an exercise-friendly solution – the TONE Active. 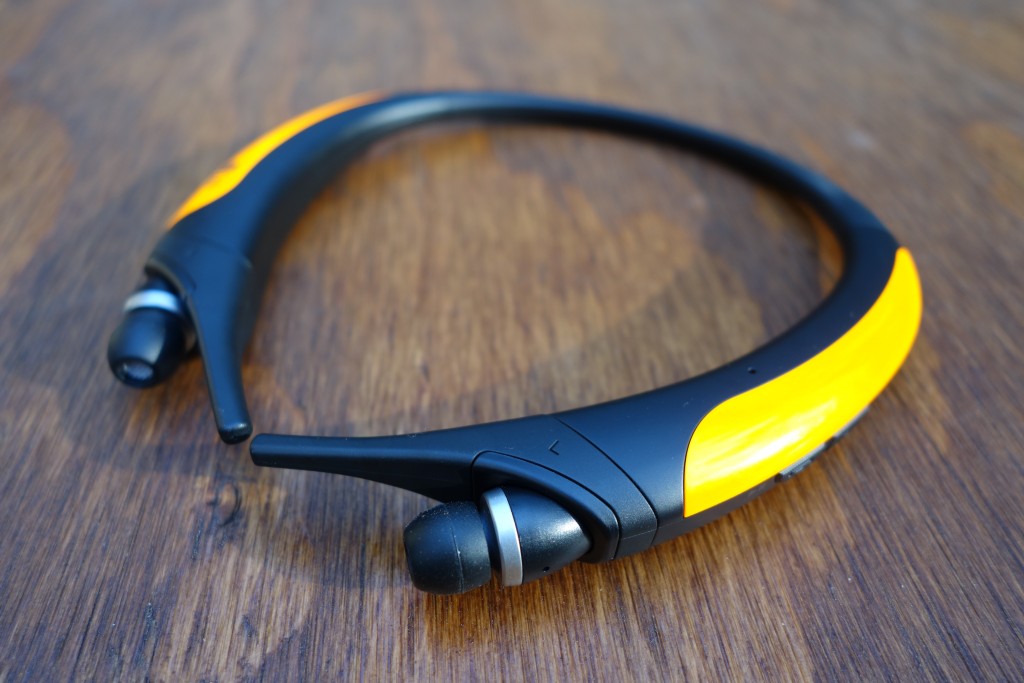 LG was kind enough to send me a set, forcing me to get up off my lazy rear-end and try them out. Let’s see if the TONE Active keeps up with the demand.

If you’re unfamiliar with the TONE, it is a neck-resting unit. Many Bluetooth headphones incorporate the wireless-enabling technology into the earpieces and then bridge them by the cable.

The TONE takes a different approach. The device is essentially a circular strip of plastic, with earbuds that extend/retract from the open ends. 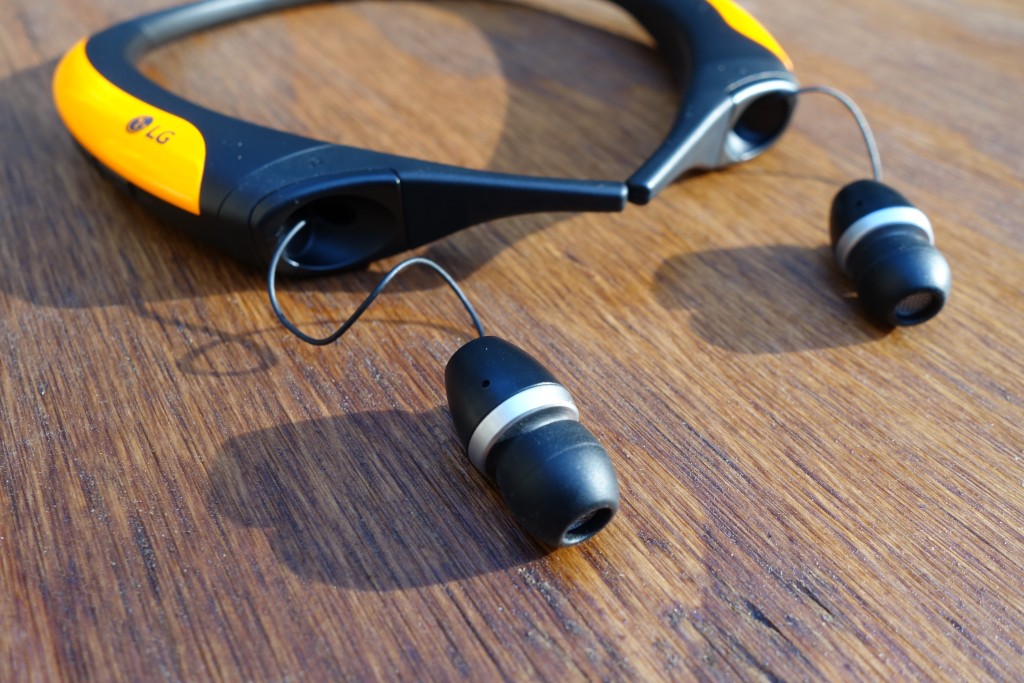 This design works well for the Active implementation, because you don’t have parts that bounce around when you’re on the move. It’s a snug and secure fit around your neck. 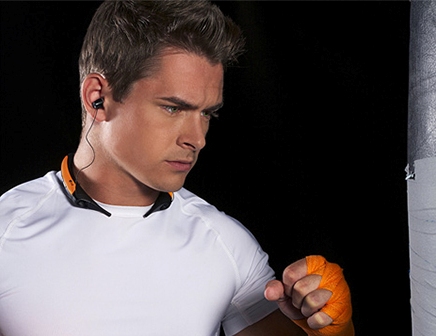 The chassis of the device is a plastic affair. But it’s not like it needs to be anything more. This isn’t a luxurious set of headphones, it needs to hold up with your active lifestyle.

That being said, the build feels solid and ready for abuse. There are two different plastics that form the circle. The electronics are housed in the hard plastic arms, which taper down smoothly to a flexible, soft plastic band. The flexibility allows you open the arms to don the headset. 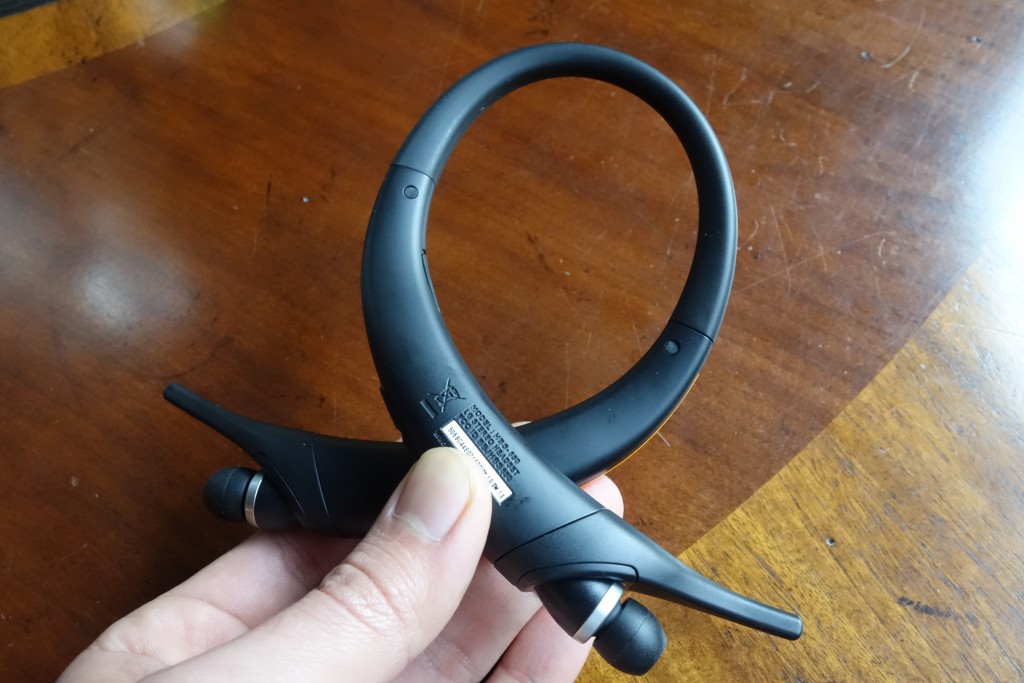 There’s a little flair of style, in the form of a colored accent. LG set me the orange unit, but there’s three other colors to choose from: Blue, Lime Green, and Pink.

Touring the device, we have the usual buttons we’d expect from a Bluetooth headset (placed outwardly from the arms). On the right arm you’ll find the Volume Up/Down buttons and on the left arm there is the Power and Phone Call button.

Therefore, this guy does pack a microphone for picking up phone calls without taking the headset off (and vibration to alert you). The micro-USB charging port is also on the left arm (protected by a flap), along with an LED light that displays status. 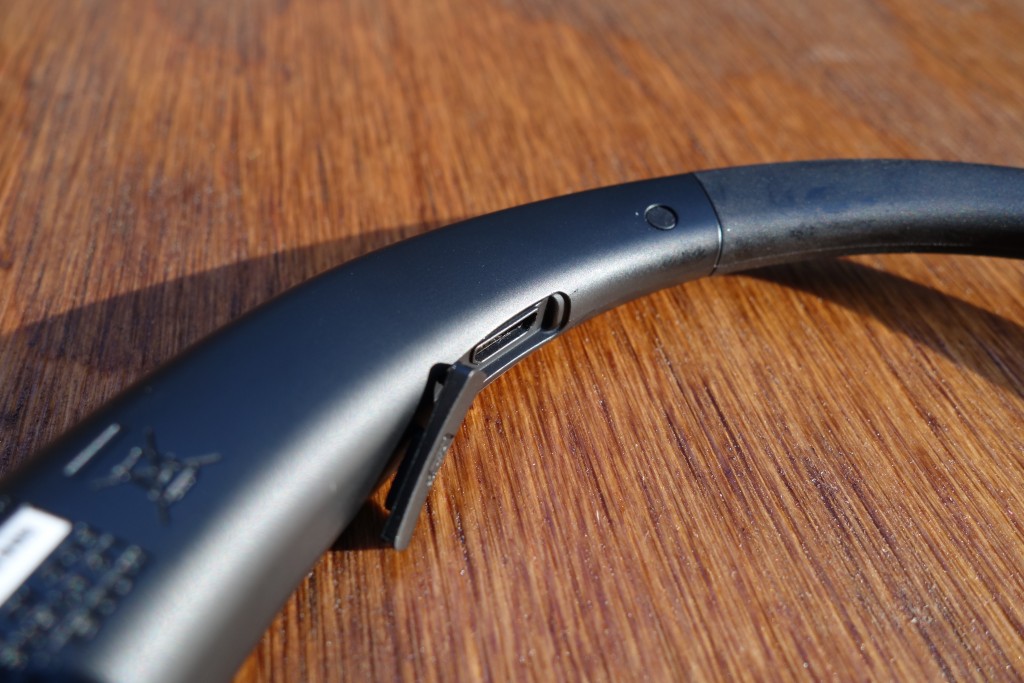 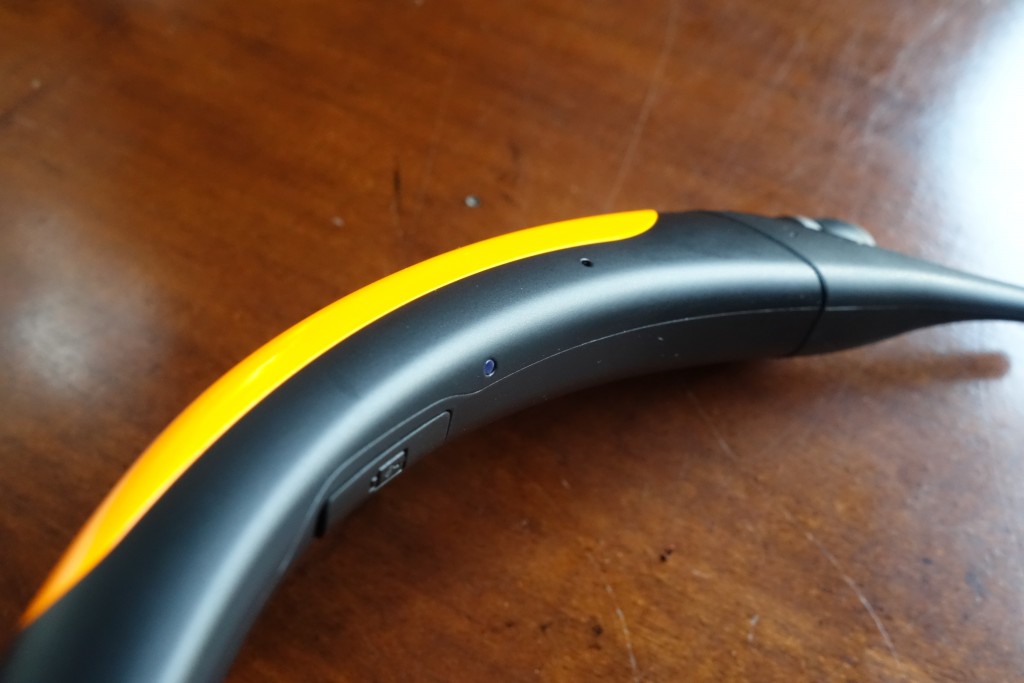 The earbuds themselves are similar to what you’d find from a wired, in-canal earphone. Another advantage of this design is that you don’t have these humongous earpieces hanging from your ears. As you pull the earbuds from their silos, you’ll hear a clicking sound (it locks as different lengths, in case you don’t need the full cable extension). Simply tug on them again to send them back.

Bluetooth headphones need a bit more attention to fit/comfort ergonomics. Basically, how do you incorporate that wireless technology so that it doesn’t get in the way? Or, what’s the point of being wireless if the headset is annoying to wear?

Fortunately, after some time with the TONE Actives I’m convinced that LG did a great job with the usability. The neck band stays right in place as I run around. And being that the earbuds are a reasonable size, they stay in place. 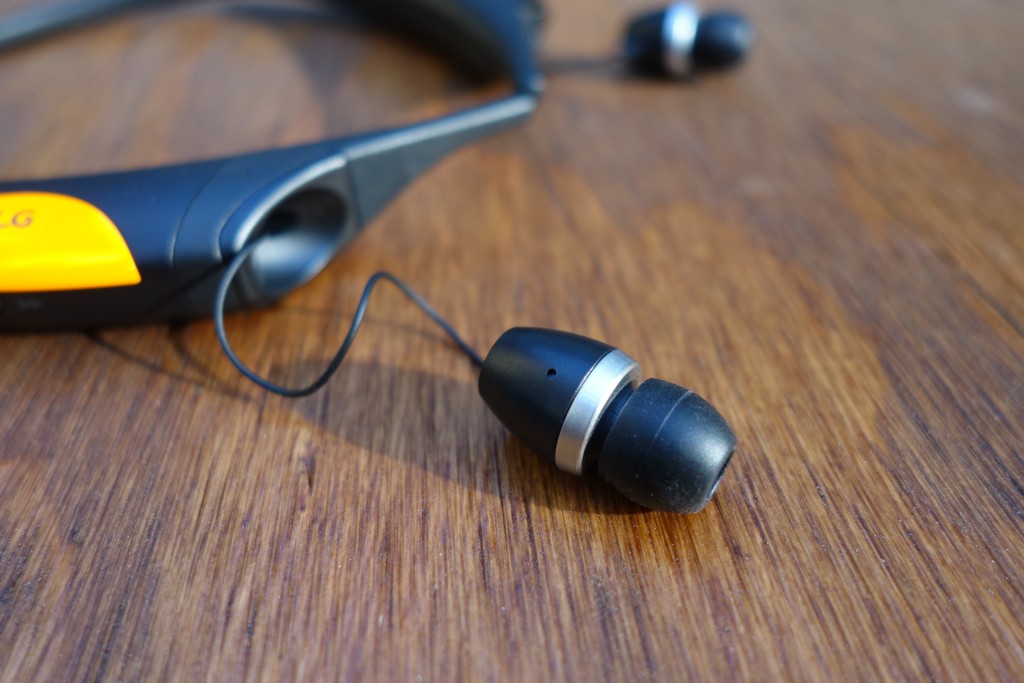 The cords extend out by a considerable length – 7 inches, which I found to be adequate (I was initially worried about the cord length being too short and the earbuds getting pulled from my ears as I exercised, but there’s actually plenty of slack). Also, the exceptional thinnest of the cables means you don’t have any weight or annoying feedback as you bounce around.

Getting started was a breeze. Simply hold down the power button and it goes into pairing mode. Then find the LG headset on your source’s Bluetooth settings and pair. When using the headphones, the button placements take a bit to get used to. I just played with them until I could remember.

An important point is that the TONE Active is IPX3-rated water and sweat resistant. You’re most likely going to be using these during your hardcore workout – which means drips of sweat are going to run along it. It’s great that the unit is robust enough to handle it. However, don’t forget about it when you hit the shower. It’s not waterproof.

Lastly, the battery is rated for a total music play time of 9.5 hours from a full charge. The was accurate in my experience, I got about 10 hours until it quit. No complaints here about the battery life, 10 hours is a good amount of playback time.

The TONE Active’s audio magic happens with what LG dubs Quad Layer speaker technology. It’s a diaphragm is made up of four layers, which is said to produce rich bass and clear treble. This is the same technology that in the more recognized LG QuadBeat 3 earphones. 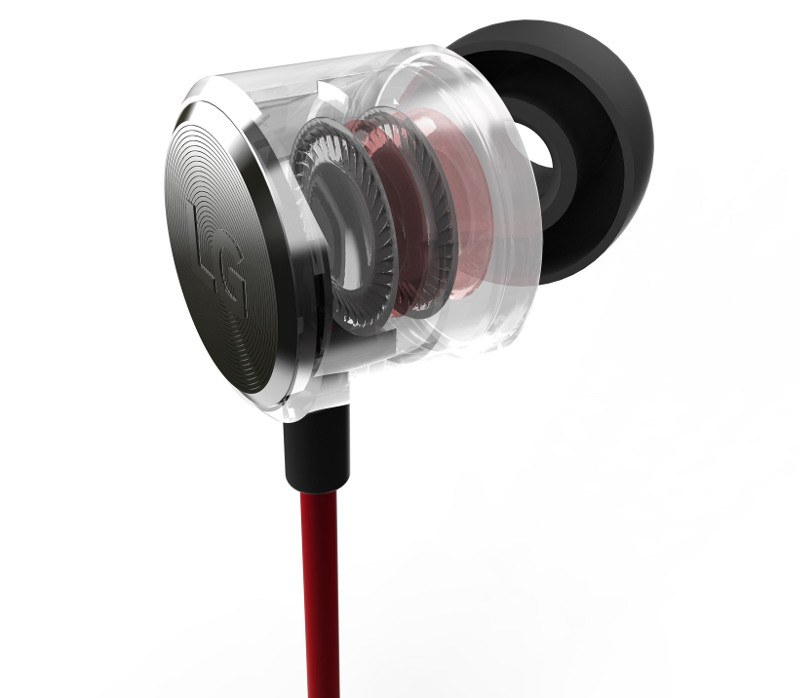 All that is fine and dandy, but more importantly, how is the sound in experience? It’s pretty good! On my first listen I immediately noticed the balanced sound signature. The entire spectrum of sound comes through beautifully, and I don’t find myself wishing I had more from a particular range (bass, mids, highs).

But there are specifics that I can pick apart. The bass is a bit boomy. Bassheads may enjoy this kind of response (you’ll get plenty of bass here), but folks who look at a more defined reproduction may say that the bass can be tubby.

I was pleasantly surprised at the treble range. It comes through fabulously and sounds rich and detailed. Similarly, mids (which commonly get recessed) are front and center and add fullness to the music. The soundstage was also wider than I expected (satisfyingly capturing distinguishable depth of elements in the music).

With a pair of headphones that focuses on activity, I honestly wasn’t expecting much from the sound quality. But LG showed me that it can be done right. No, the definition won’t grab attention from audiophiles, but the well-roundness of the audio package should be acknowledged. 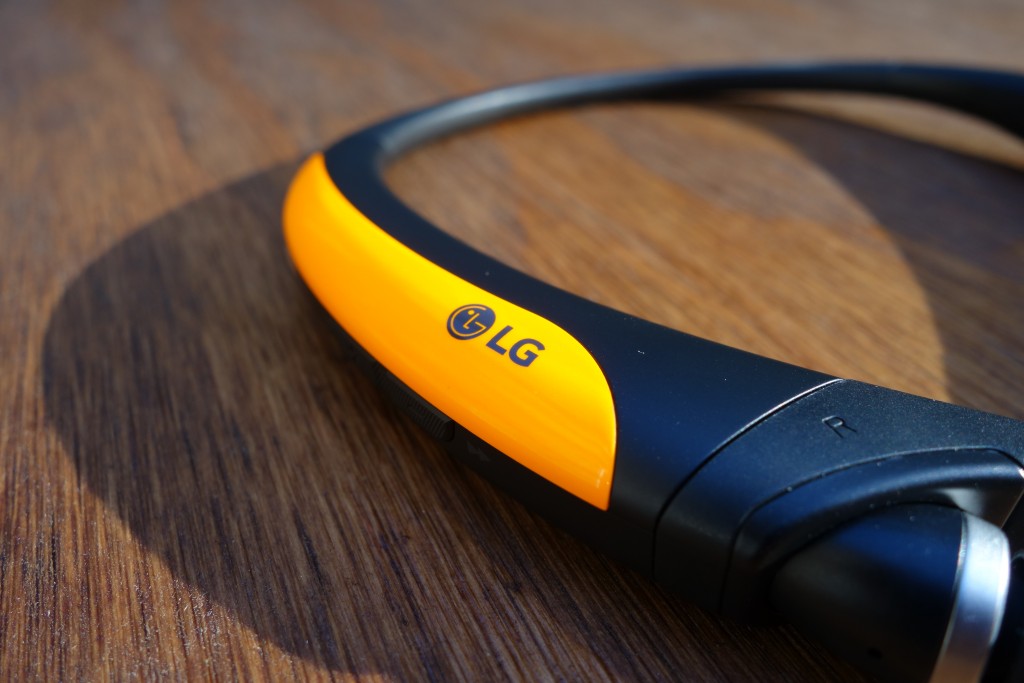 I had a great time with the TONE Active. Not generally being a fan of around-the-neck headphone solutions, I actually found the fit to be really comfortable. I also liked that the unit securely stays in place while working out. I’m convinced over this retractable earbud design, it works.

The sound quality and battery life were also satisfactory. I would have no problem recommending the Active as a great wireless option. It’s not the cheapest Bluetooth headset out there (at about $80), but you get what you pay for. You’re getting a durable and well-thought-out package here.