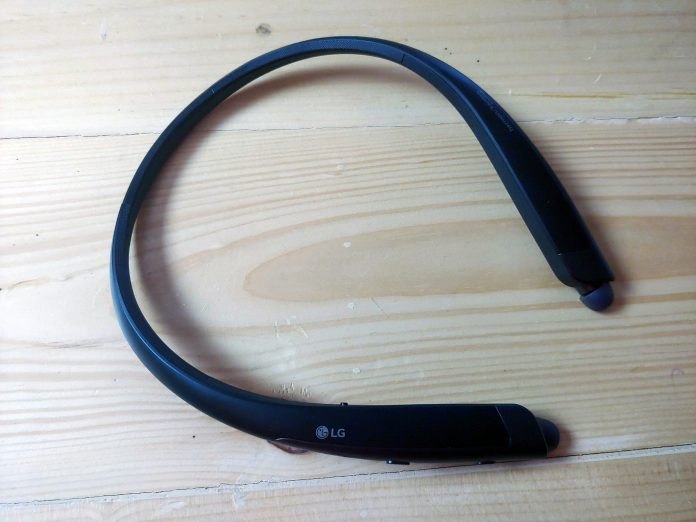 LG recently dropped the LG Tone Platinum SE, the most recent addition to its excellent Tone Bluetooth earbuds lineup. The Tone line is known for its behind-the-neck design, great sound, and a premium price tag.

This is my first pair of Tone’s and I was pretty excited to get my hands on them. I’ve used other pairs of Bluetooth earbuds that emulate the design, but I’ve never had the chance to listen to the real deal.

When a huge company like LG produces a product like this, you wonder if they’re really doing it better than the thousands of other smaller companies around. You can jump on Amazon and find tens of thousands of Bluetooth earbuds. Many emulating the same functionality and design of the Tone Platinum SE. So, are you just paying for the LG name or are these really better? 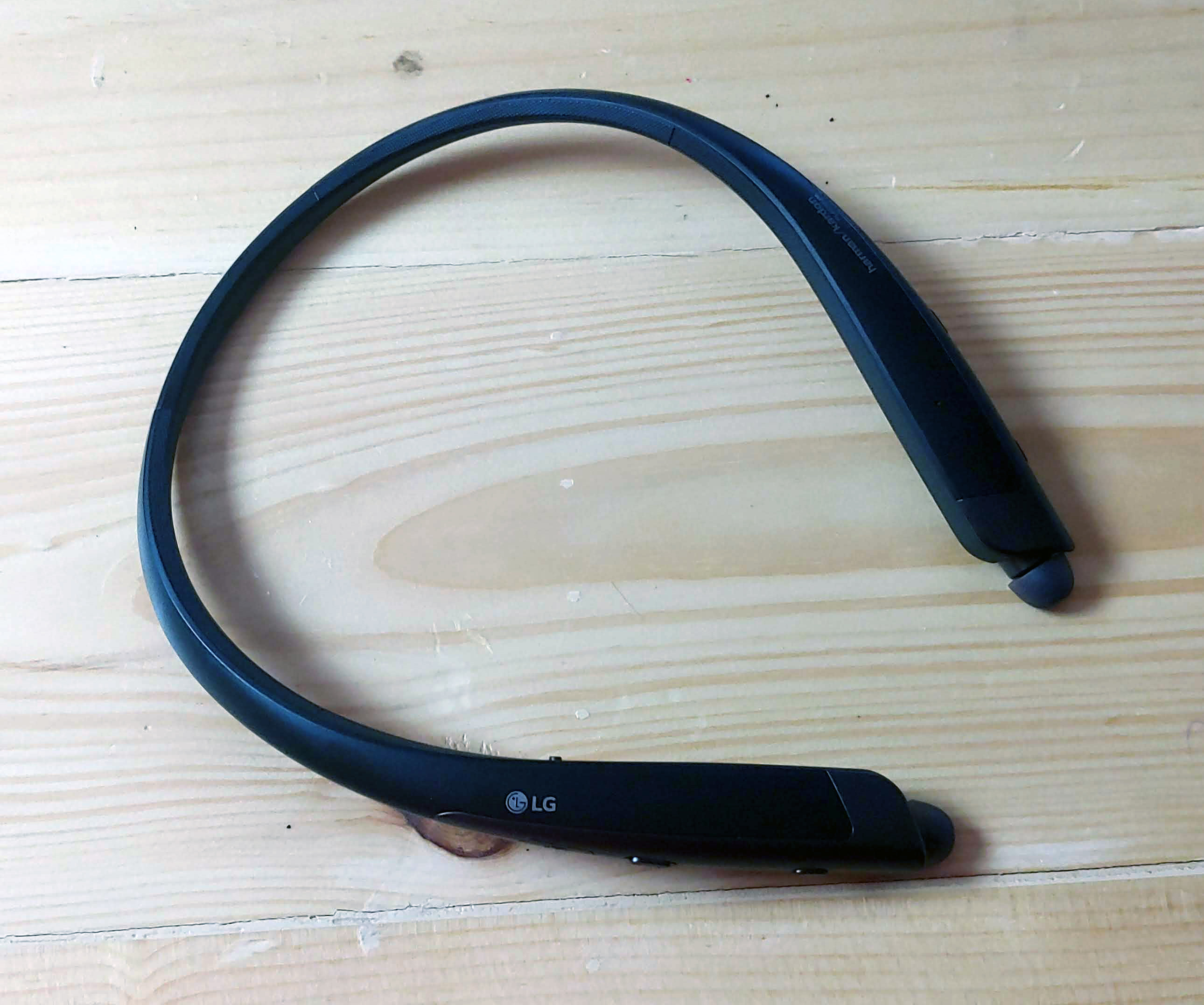 I know that the trend recently is to create truly wireless earbuds. Apple may not have been the first, but they have been the most successful with the AirPods. This spawned a huge lineup from companies like Jaybird, YEVO, and Optoma. But, just because they’re trendy does not mean they’re better.

I love the neckband here. I know some people think it looks dumb or dorky, but I don’t mind the looks at all. The subtle curve to conform to your neck and chest is a great touch. The hard plastic isn’t my favorite material in the world, but there are some advantages to using it here. I’ve never felt that I’ve come close to losing or breaking these in the month that I’ve been using them due to the design and materials.

I really enjoy that these can bend easily and regain their shape when putting them around my neck or taking them off. I’ve used more rigid neck-style earbuds and they’re truly a pain. 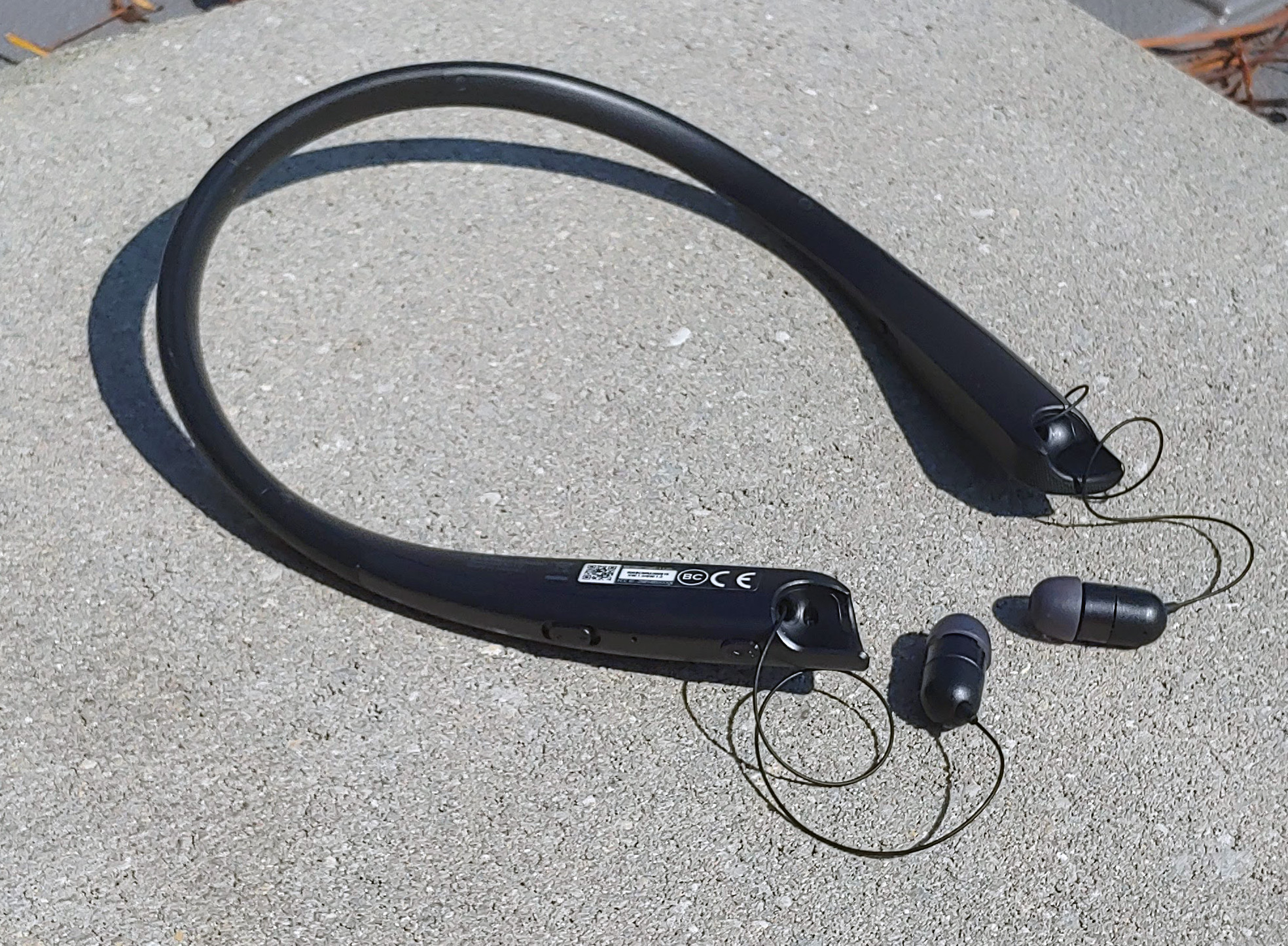 The earbuds are connected to retractable cables. This is a fantastic design because it means you don’t have anything dangling. One of my bigger issues with the V-MODA Forza Metallo Wireless was that they earbuds hang down so low that they get caught on things and can pull the whole unit down. It’s a pain. LG doesn’t have that problem here.

Inside the neckband, you’ll find a softer, stylized plastic that feels fine against the skin and the power switch. Again, this is another design choice I really like. Sure, turning on earbuds by holding down a button for a few seconds is fine, but actually having an on/off switch is a lot more satisfying. Not only that, but it’s a lot easier to tell if these are on or off just by looking at them. 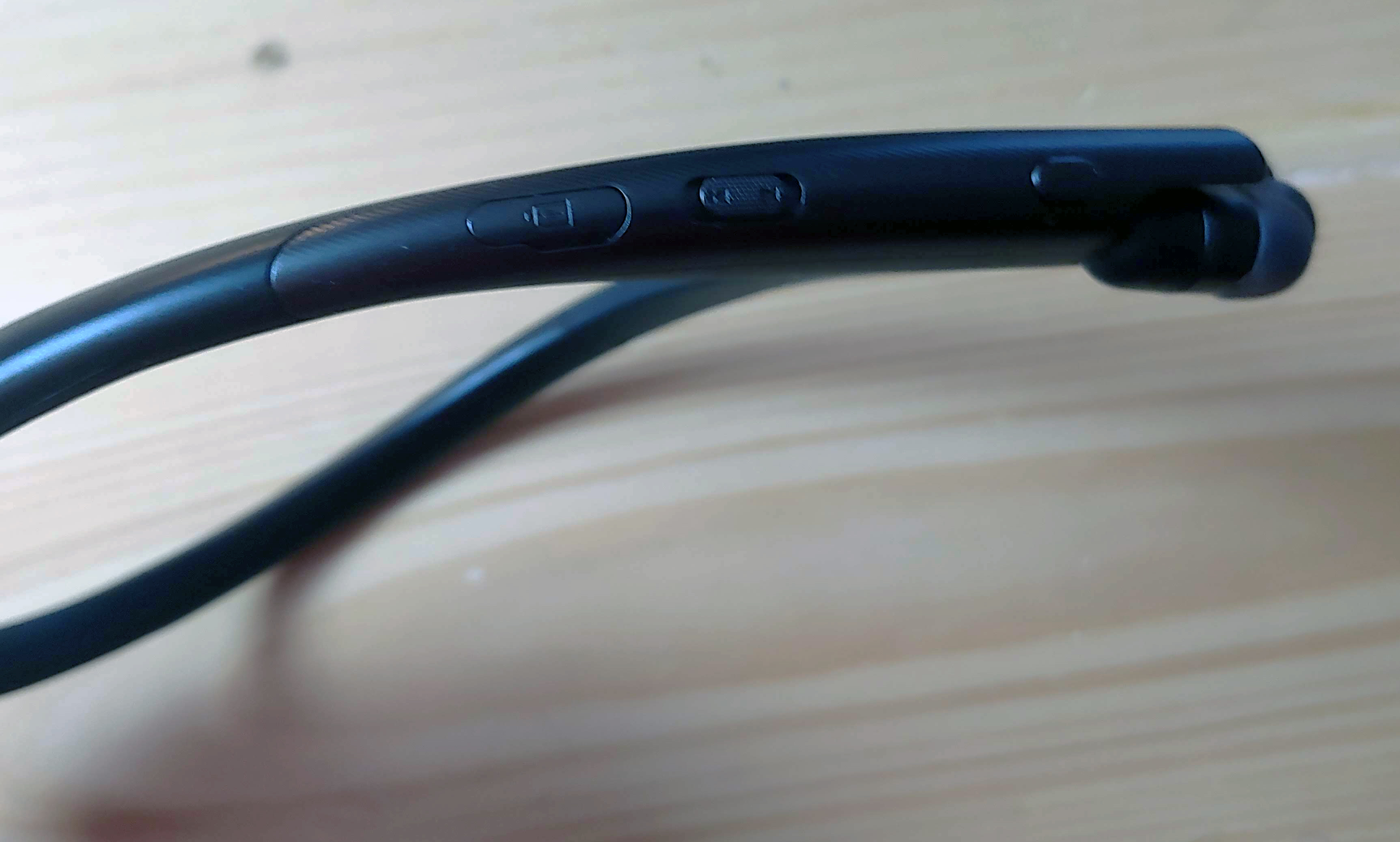 The outside of the neckband is where all your controls and the charging port is. On the left side, you have a track selector, a micro USB charging port, and the Assistant button. I’m not really sure why LG decided to go with micro USB here, but it’s disappointing to say the least.

The track selector is just as you might expect. It lets you skip back or forward on your tracks. A nice little feature here is that instead of it being a button or two, it’s actually a slider that you push forward to skip tracks and slide back to skip back. It’s easy to slide, but I did notice the neckband moving along with it when I used it.

The Assistant button is where the magic is. A simple press launches Google Assistant, as long as you’re connected to an Android device. You can use voice controls to do pretty much anything you’d do if you picked up your phone and launched Google Assistant. It’s a great feature I really enjoy using.

The right side of the device houses the volume up and down slider that acts just like the track skip slider, and an answer and hangup button for phone calls.

All of the buttons on the LG Tone Platinum SE feel really solid and work well even after repeated used. I love the sliding button functionality, but LG may want to think about going to buttons for future releases so this thing isn’t sliding all around your neck when you’re trying to turn the volume up.

Let me preface the audio section by saying, I’m not an audiophile. I love quality audio hardware, but I can’t distinguish the audio differences in those ultra-premium $50,000 headphones from my Sennheiser HD 598 Cs. I’m just a normal guy.

That being said, I was very pleased with what I heard out of the LG Tone Platinum SE. You shouldn’t expect to come in and get brain-rattling bass or the biggest soundstage, but you do get a nice sounding pair of earbuds here.

These aren’t the most accurate earbuds in the world. The mids sound really good, but the highs and bass are pretty aggressive. I do enjoy the added bass while listening to EDM and rap, but it can get a bit overwhelming while watching movies with lots of explosions.

The story is much the same for the highs. They sound very good, but you can definitely tell there’s some emphasis on them. I never heard anything painful or screeching out of these which is nice, but some of those pop princesses will sound a bit… off. Not bad, just different.

One area where the Tone Platinum SE’s really shines is in clarity. Sure, some instruments can sound a bit overpowered from time to time, but for what you’re paying, I was pleasantly surprised. I was able to pick out instruments in almost all the music I listened to, even when powerful voices came in. 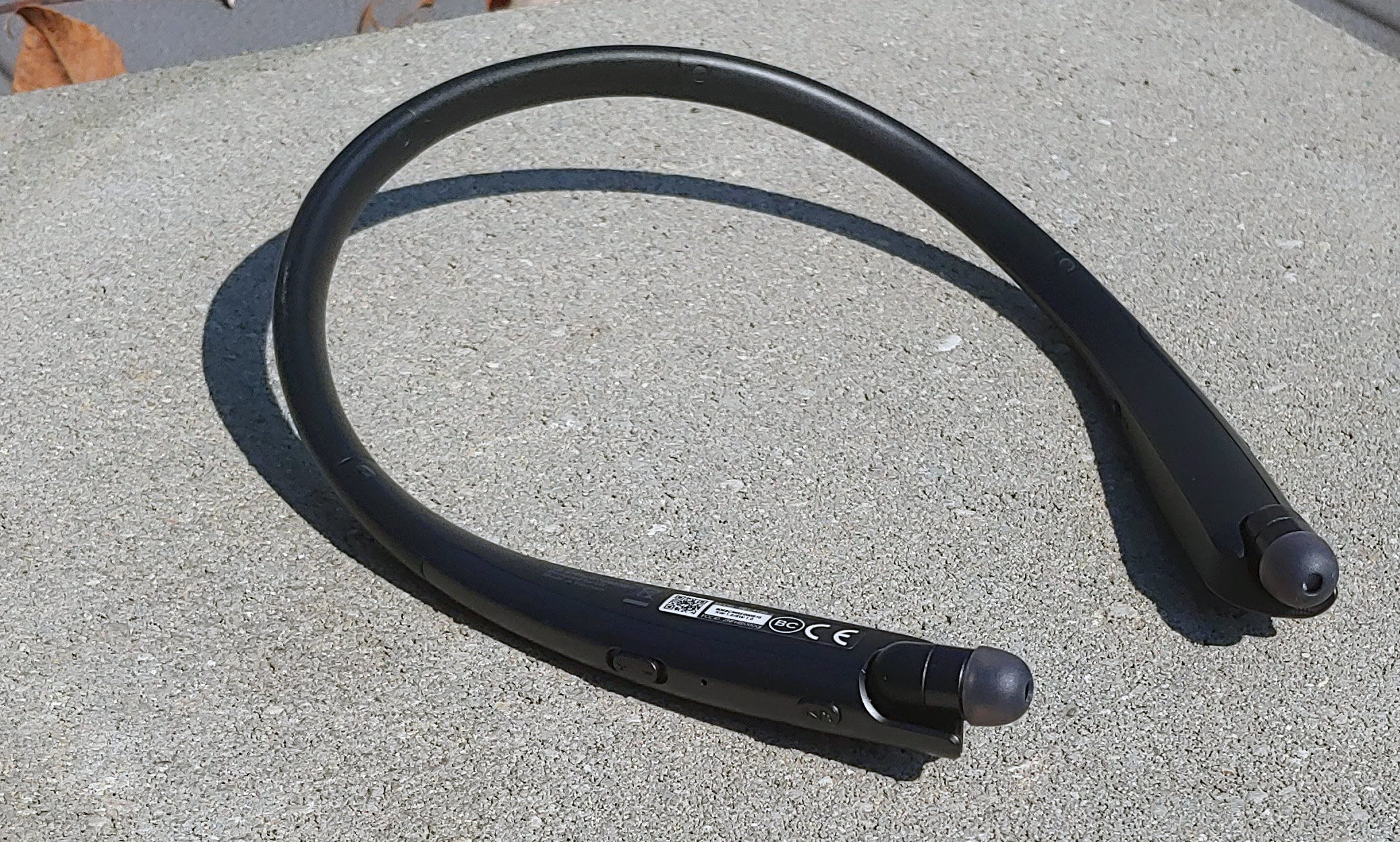 I really like these things. I generally move on to another pair of headphones or earbuds after reviews, but I keep coming back to these. In fact, my Sennheiser HD 598 Cs are currently sitting in a drawer because the Tone Platinum SEs are my new daily drivers.

Battery life is a real standout here. I get about 11 hours when listening to music and movies between 50% to 70% volume. That’s fantastic. Even if you go to the gym before work and use them all day during work, you’ll still have enough juice for the commute home. Very impressive.

I also love how light these are. I’ll often times put them around my neck and completely forget they’re there. I do, however, wish that LG could address the hiss in these. It’s not super loud, but when you’re connected to a phone or a computer without anything playing, there’s an audible hiss. It’s annoying.

These also aren’t going to be your go-to audio device if you’re into intense workouts. You’ll want to grab something like the Jabra Elite 65t that have a better fit and focus on workouts. This is also true if you’re a traveler. There’s no noise cancellation here, nor is there a great seal in your ear to keep things out.

Regardless, I love these. They’re the perfect earbuds to get me through an entire workday and have battery left over for the rest of the day’s activities.

If you’re interested in picking up a pair of the LG Tone Platinum SE, you can get them from Verizon.