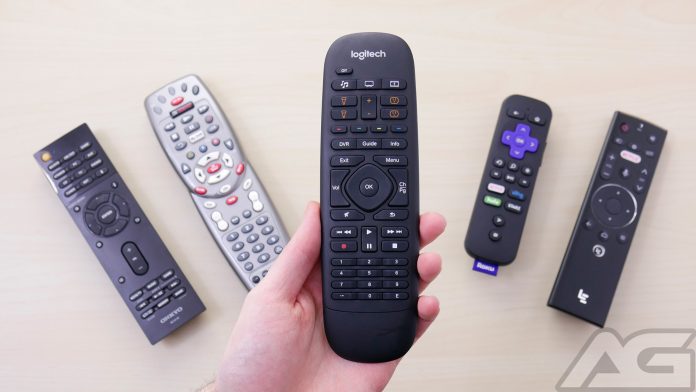 As a home theater enthusiast I often run into a problem that’s probably plagued you all: too many remote controls. Fed up with juggling several remotes, I decided to find a solution and search for the ultimate universal remote.

The Harmony Companion comes with one remote, one hub, and one IR blaster; its support is limited to eight total devices. The remote itself left me a little underwhelmed. While it has a nice soft texture grip in the hand it feels too wide to wield efficiently. The texture on the top also picks up oils from your fingers and starts to look dirty after some usage.

Reaching all the buttons is a chore and while they feel good to press I wish they were easier to distinguish by feel alone. I’d like to see them raised up higher, use a more distinctive shape, rounded edges, or a combination of all of the above.

All of this, combined with the lack of a backlight, make it difficult to learn and use at night in the dark — which is typically when I use a remote. That being said, the buttons have a nice texture and felt good to press.

The Harmony Companion comes with a CR2032 battery preinstalled and is said to last up to a year with normal usage. Even if it doesn’t quite make it an entire year, that’s still pretty good battery life. Remember it is doing the work of all the remotes in your house, not just one.

The Harmony Companion includes a hub which it communicates with by using RF signals. The hub, in turn, relays what the remote says sending out infrared or Bluetooth commands to your devices.

This means you don’t have to aim the remote at the devices you’re trying to control. You don’t even have to aim it at the hub because it is using radio signals to communicate with it. This feels so freeing to not have to worry about where you point your remote. 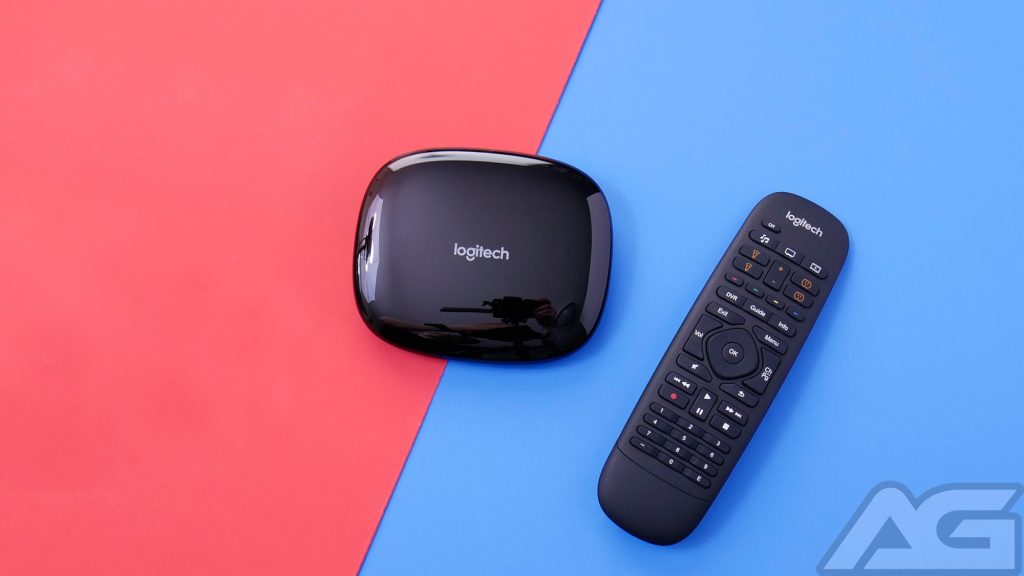 However, you must place the hub in an area where it can send signals to all of your devices. If you choose it is even possible to hide all of your devices in a cabinet along with the hub giving your living space an uncluttered clean appearance.

The included IR blaster is used when the hub is unable to send signals to one of your devices due to its location. With the setup I used, I was able to position the hub in an area to reach all devices. Regardless, it is excellent to have the option for an IR blaster for those times when the signal could be blocked by a piece of furniture.

Set up and usage

Setting up your remote is simple through the Harmony app. It will scan your Wi-Fi network and automatically add devices if they are turned on and connected. If your device isn’t connected via Wi-Fi or it simply fails to detect it, then no worries. It is as simple as doing a search in the app and adding the device from Logitech’s vast database.

During the set up, Logitech really encourages you to create activities where you can assign one button on the remote to accomplish several actions and control multiple devices. For example, one button could turn on your TV, Roku box, and A/V receiver. In this particular scenario, it works fantastic. All of the buttons are assigned properly and it works flawlessly.

However, it doesn’t always work so seamlessly. When I tried assigning my Android TV and cable box to the same activity button, it caused issues where the cable box tried to take over certain buttons such as the menu and OK button. When I wanted those assigned to the TV.

This left me with two options, either create custom buttons on the remote using the app or assign the TV and cable box to separate device buttons like on most traditional universal remotes. In the end, I decided to do the latter as having them separated made the most sense to me.

Another issue I ran into was input switching on the TV. Ideally, each time you choose an activity your TV automatically switches inputs. Unfortunately, that was not the case for me and I had to manually switch inputs each time.

In this situation, I’m unsure who the blame falls on. I have a LeEco TV and have issues with it in the past. It would not surprise me if the fault was with LeEco and not Logitech.

Controlling the PS4 also became an issue but this is completely Sony’s fault. As some readers may know, Sony will not allow any third party remote turn on the console. Instead, you first have to power up the console and then the Harmony Companion can take control.

One feature I found myself not using very often, but which you might enjoy, is smart home integration. With the Harmony Companion, you can control certain smart home devices.

In my case, this meant lights I have paired to my SmartThings hub. While it was neat I rarely used as I prefer commands through my smart speakers. Nevertheless, you can work in some cool integrations, such as turning off lights while turning on the TV and starting up Netflix on the Roku.

The Harmony App allows you to control your home theater devices using your phone or tablet. This is a great option for when you don’t have the remote nearby or you’re in another room.

Besides controlling all of your devices it also allows you to customize your remote. I found this very useful when buttons were either not assigned to the remote after adding it or were assigned to a button I didn’t find convenient to reach.

As convenient as it is to remap your remote I found the process tedious and overly complex. It requires digging through menus and several clicks each time. Surely, there must be a better way of doing this. All I know is that once I set it up I never wanted to dig through the menus again.

Using your smart speaker you’ll be able to power the TV on or off, change the channel, control volume, pause/play, open Roku apps, and more. I found myself using the voice commands more than I did the remote on most days. It just became too convenient to say what I wanted without having to know where the remote was.

Overall, the Harmony Companion wasn’t exactly the perfect ultimate universal remote I had been wishing for. Despite its minor faults though, it does essentially do what I need it to do and has consolidated my remote count from four to one.

Even if it doesn’t do it as conveniently as I had hoped, I still found it to be worth a $100 investment. Besides the voice controls more than made up for any of the minor grips I’ve had.