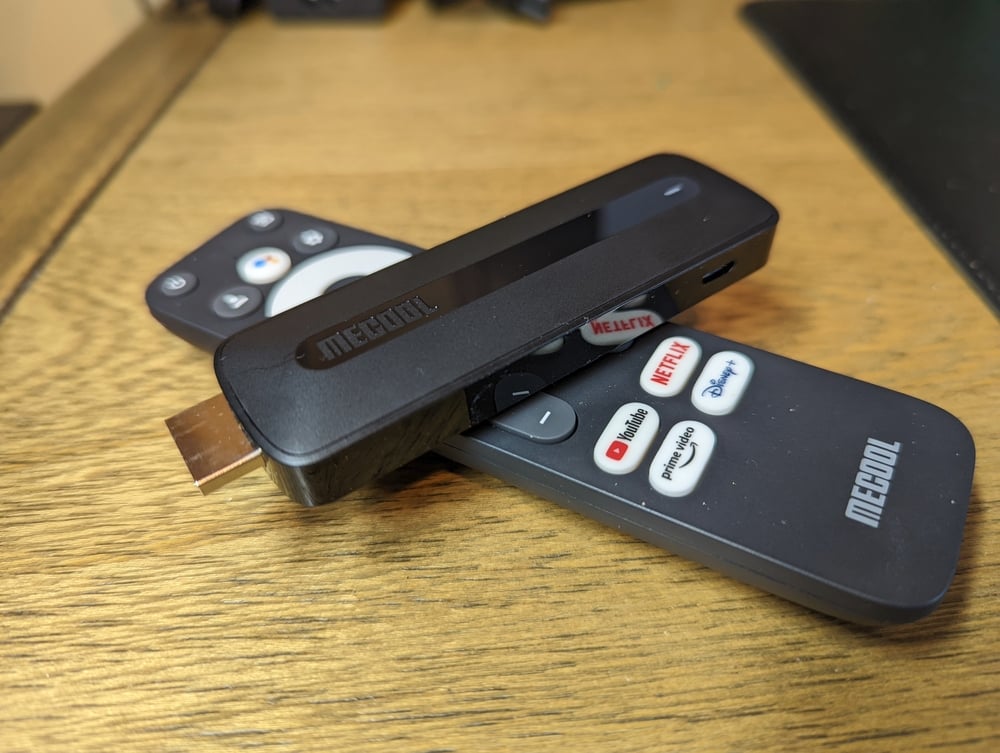 One of the newest avenues for Google’s empire has been television. While it’s already seen an odd progression that Google is notorious for, the latest reboot with Google TV is slowly making it to other devices. One such device is the MeCool KD3 TV Stick. We’ve spent a month with this streaming dongle and came away with mixed emotions.

If you’ve owned a Fire TV Stick or a Roku Stick, this will look very familiar with the KD3. You will unopen the box to find a self-enclosed embedded unit with an HDMI being the lone output. The only other port is a micro-USB for powering the KD3.

Inside the box, you will get the included remote, power adapter and cable, HDMI extender, and an OTG storage splitter cable (more on that later). Most of these are everyday staples available to get started with any streamer.

The initial performance of the MeCool KD3 is more than acceptable considering the AmLogic Quad-core CPU and 2GB of RAM. I prematurely thought the 2GB of memory would be the main concern, but this was relieved pretty early on. While it’s not a racecar, most transitions move smoothly.

The issue that almost immediately arose is the lack of internal storage. With only 8GB, this runs out after most people download their favorite streaming apps. For me, after Hulu, Netflix, Amazon Prime, HBO Max were downloaded, I was unable to install Peacock.

While this is not new, the Google Chromecast suffers the same issue. This really makes these options a struggle. The lack of internal storage is not easily solved and will rear its ugly head almost in the first 24 hours for most users.

The solution MeCool has to settle on recommending is an OTG cable. For those that may not know, this is an Android-specific cable that allows both power and external storage through a single port. With the included one in the box, you can add a USB storage device to the MeCool KD3.

Once you add a USB device, you will get a menu option to set up for the MeCool KD3 as internal storage. Apps can be added to the external device during this process as well. Afterward, the USB acts as if it was internally a part of the KD3 extending the displayed storage.

I like that the OTG cable was included in my box, but if this isn’t an open confession to not having enough storage from the factory, I don’t know what is. I will lay most of the blame on Google for this issue, however.  Companies like MeCool are simply following the certified specs set by the Google TV hardware team. Either way, it’s a blatant fall in both Google TV devices we’ve reviewed.

The new refresh for TV streaming Google has created with Google TV vs Android TV is subtle but improved. You now get a much snappier and well-thought UI on the MeCool KD3 TV Stick. Google TV moves through transitions well and the recommendation software seems even better than when I used Google’s official hardware.

Other than that, both previous Google TV and Android TV users will find the interface comfortably familiar.

This might be a bigger issue than the internal storage for MeCool. At almost $70, this is a full $20 more than the official Chromecast with Google TV. And that hardware can often be found for as low as $35 from time to time. MeCool will have to heavily discount the KD3 TV Stick to compete in my mind.

MeCool has a win in the fact that they are the latest partner to offer the updated Google TV software, but I’m not sure that just being on the market is good enough. With the same internal storage limitations, and a higher price than the Google Chromecast with Google TV it’s a hard sale.

If you do want to give the MeCool KD3 TV Stick a shot please hit the links below.