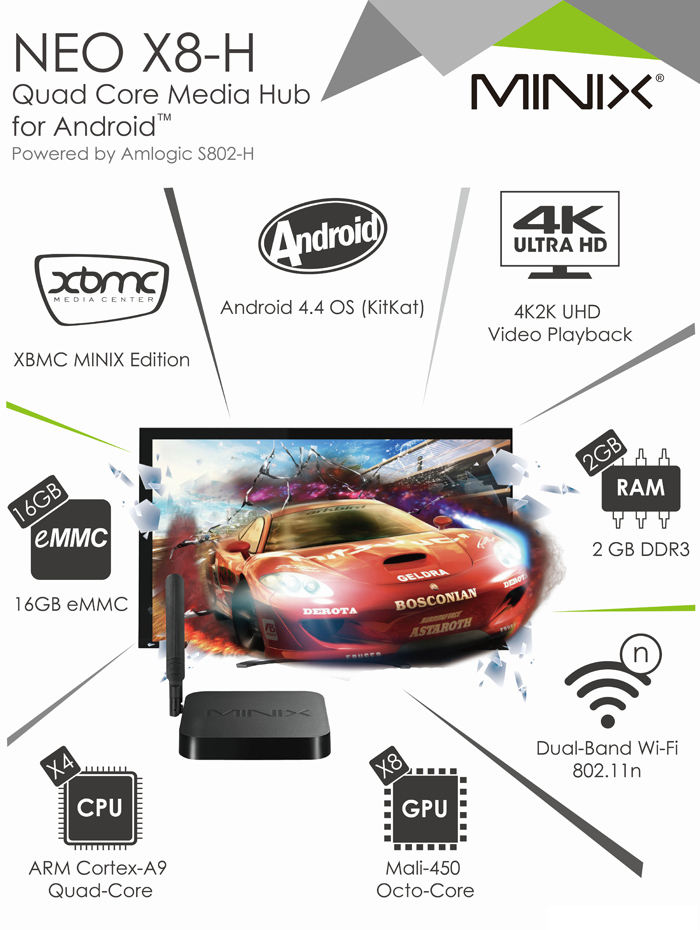 Internet TV is dominating the TV market. And with a dominating market, comes countless entries from companies all sizes to become a part of the market. The MINIX NEO is one of those entries. And a great one too. Coming with a great price-tag, notable Specs and Features, and a simplictic device. The MINIX NEO X8-H is a great device. Here’s our review of it.

MINIX has had some notable products and some not-so notable products. Mainly focused on the Internet TV market, MINIX’s new NEO X8-H is deficiently a noteworthy product from this company. With features such as full on Android KitKat 4.4 use, a Quad-Core Cortex A9 processor, 2GB of DDR3 RAM and 16GB of Internal Storage make this thing overpowered for a TV player, luckily in the Tech Industry, overpowered is never bad. Here’s a full list of specs to see how overpowered the device is:

The MINIX NEO X8-H is filled with many features that make it more than an Internet TV device. Due to the fact that it is an Android based device, you get all the good stuff you look for in Internet TV such as Netflix, Hulu, Youtube and even XBMC support. You also get access to all the Music Apps (based on your region) such as Spotify, SoundCloud, rdio and more. It can also work as a ChromeCast and transmit media from your phone to the MINIX. The reason it can do all this is due to the fact that it runs a full version of Android 4.4 KitKat, giving you access to everything available on the Play Store and basically everything you can get on your phone. With the specs, the NEO is an absolute beast, integrating somewhat flagship phones specs into an internet TV device, which you honestly don’t quite need, if you already have a phone that has the same or better specs, and a $35 dongle (ChromeCast) that can mirror media and do what you really need with an Internet TV device. However it is still nice to see this, especially considering the low price tag.

The design of the device is very much like the design of the Apple TV. Almost identical really, if you switched the logos, the two devices would look exactly the same. Which is a good thing, with Apple’s great design, being seen on a cheaper, full Android, betters spec’ed device. Other than the fact the it’s a small black box, that looks nice, and a-lot like Apple’s device, there isn’t much to say about the design of the MINIX NEO X8-H.

The device is great, which has amazing specs, features and designs, what’s not to love? The device is available for $179 on GearBest.