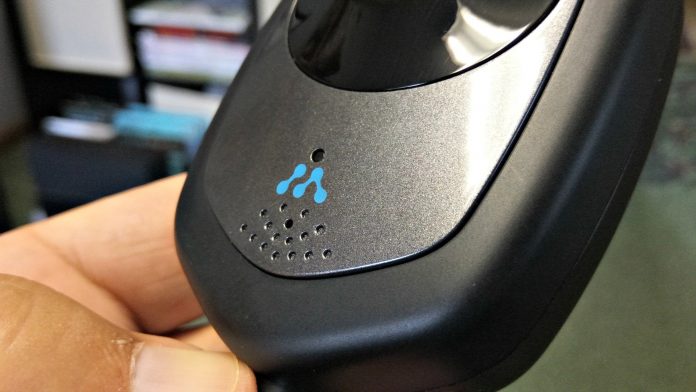 As we head into the end of 2017, it’s easier than ever to throw together a connected home setup. Whether you’re looking to swap out your entire lighting system with smart bulbs or install a new thermostat or appliance, it’s fairly simple. This goes double for those who are looking to get their feet wet; you can set up a Wi-Fi camera, for instance, in no time at all.

We were sent a review unit of the Momentum 720p Wi-Fi camera which we tried in different locations at home and at the office. Retailing for about $40-45, it’s available at Target, Walmart, and other online outlets. Here are our thoughts after a few weeks of using it.

Setup is rather easy in that you simply plug the camera into a wall outlet via its included USB cord and install the app. At six feet the cable is plenty long enough to reach from most outlets for placement in inconspicuous spots. 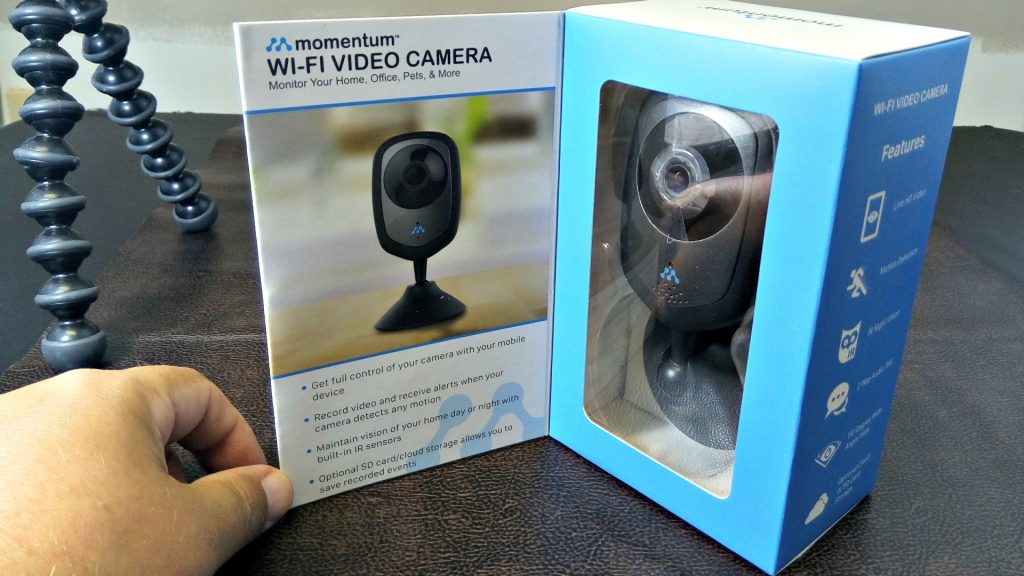 As for the app and its setup, that was also fairly simply in at least two of the instances we tried. Once plugged in and powered on, you’ll pair the camera to your phone. You will need a 2.4GHz or 5GHz router (802.11bg/n) on your home or office system for Wi-Fi connectivity. We did run into a few snags trying to factory reset the camera and connect to other networks. It seemed to take a few tries to get things right; pulling up the live feed proved tricky at times. 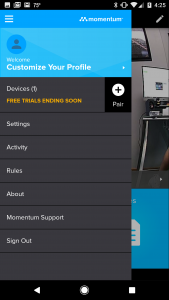 Features of the Momentum 720p Wi-Fi camera include two-way communication between the phone and camera, support for microSD storage cards up to 128GB, sound and motion detection, and trigger alerts. For under fifty bucks the list of options and details is pretty sizable.

We found the 110 degree viewing angle to be adequate, giving us quite a bit to look at on our phone’s display. Quality was sharp and consistent, but it did depend on your network settings. In cases where our router was being taxed with Netflix streaming, online gaming, and other heavier demands we found the Momentum to stutter and lag.

Our initial setup gave us our best impressions of the camera. Once we moved it from the office to home and started to use other networks, the experience suffered. Specifically, we never really got the camera to give us a true live stream; things were lagging and communicating with people on the other end wasn’t always pleasurable. 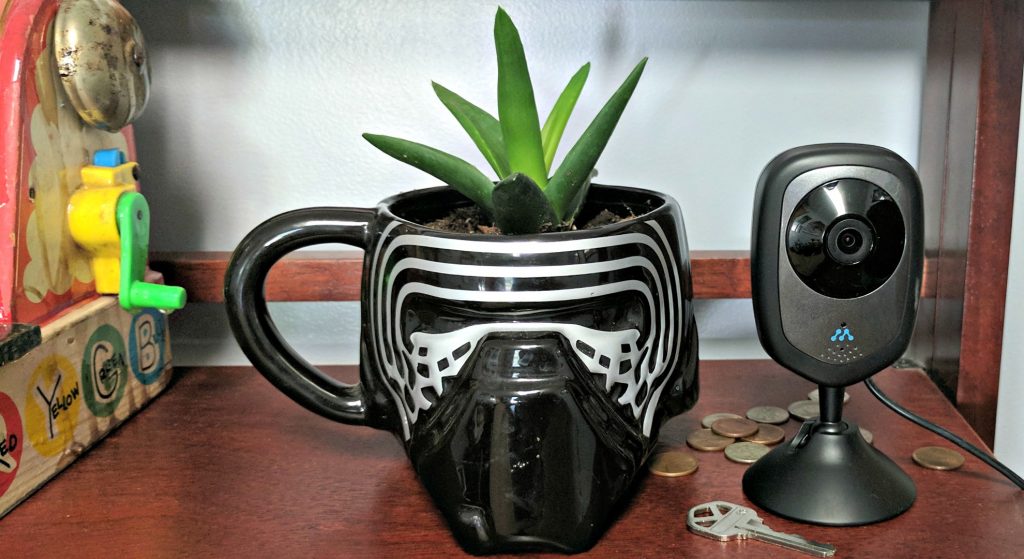 The motion detection and sound detection have variable sensitivity settings. This was frustrating to figure out, especially with push notifications showing up at a seemingly endless clip. A door shutting in another room would trigger the camera and it would start to record. Someone coughing down the hall, a car honking outside, or sound from a TV would be all it took. On the other end, you could dial it down to where you had to put too much effort into making noise in order to get it to trigger.

As a camera to keep an eye on the office over the weekend, the Momentum works quite well. We don’t expect the doors to be opened, but the times when cleaning staff comes in, we like to know they’re sticking to the job and not poking about. This works great for that sort of setup. Or, maybe you want to peek at what’s going on downstairs while working in the office. The Momentum fits that bill.

As a camera that sits in the kitchen and lets you keep an eye on the comings and goings of your pets, well, that’s a different story. Your mileage may vary, but we never really loved how things worked. We were getting notifications from the dogs running through the room some 30 seconds earlier. We would have trouble getting the live stream to pull up. It got pretty aggravating at points. 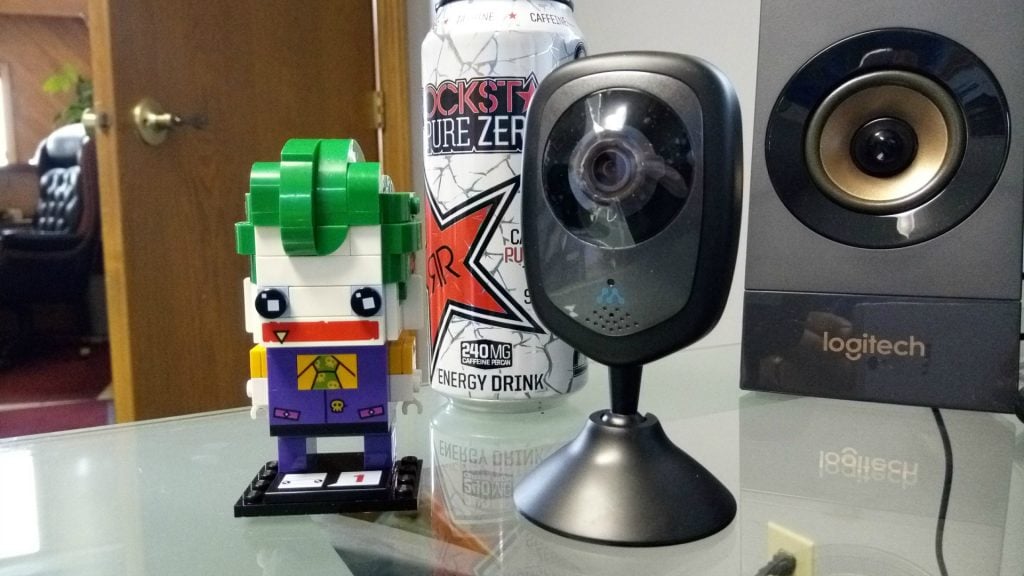 It takes more time that we like to configure recording alerts and notifications. This proved to be a real nuisance when we wanted to just hop in and see the live feed. See, the camera was trying to capture these little videos every time the motion and sound settings fired. So, rather than giving us a quick glimpse, we had the camera recording video that we could watch on a short delay. So much for telling an intruder to get out of the house. By the time we could see what was happening real time, they would have been out of sight. Perhaps you’ll have an easier time setting things up.

The night vision was a nice touch, but the camera isn’t designed to work outside in different elements. Setting it by a window works, but motion detection triggered for us every time a headlight passed by in the distance. Or, if someone flips on a light inside and it reflects off the glass. We envision this working better if you wanted to put the camera up in a hallway so you can capture your teen sneaking out of their room. Good luck getting a timely alert or being able to catch them in the act.

If it sounds like we’re hating on the camera, we really don’t meant to come off harsh. As indicated above, the first time we set it up we loved it and found it to be ideal for the needs. We had a good spot for placement, lighting was ideal, and we didn’t expect to need live stream very much. If someone came into the office and took something that didn’t belong to them, we would have solid, HD proof.

If you’re considering picking one of these up, be sure to keep an eye on your return policy. Moreover, make sure you’re able to test all of the features out that you want. Is this a camera you expect to move around? Try that a few times in the early days. Forty five dollars isn’t a crazy amount to spend, but it’s certainly nothing to sneeze at.