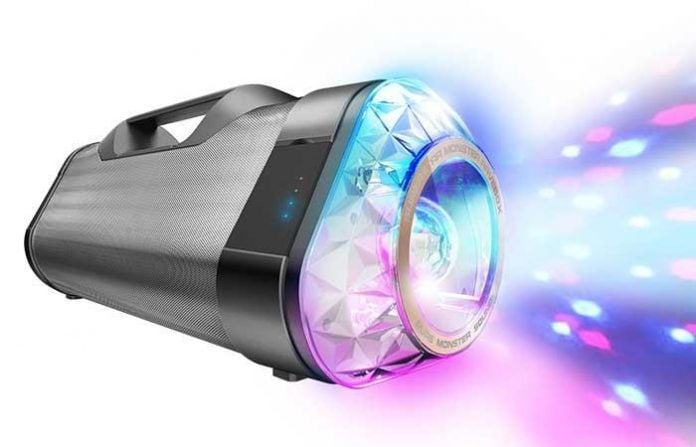 If you’re looking for a little bit more premium of a device than the standard $20 Bluetooth speaker on Amazon, you might want to check out the Monster Superstar Ravebox. You probably know the company Monster even though you don’t realize it. It’s the company that makes the premium HDMI cables, but what a lot of people don’t realize is that it makes an entire host of high-end Bluetooth speakers, earbuds, headphones, battery banks, and other cables.

The Monster Superstar Ravebox is at the highest-end of the price spectrum for Bluetooth speakers. In fact, I don’t think I’ve ever seen another portable speaker at the $449.95 MSRP of the Superstar Ravebox. The only thing close is the Fluance Fi70 which is a stationary speaker, but like the Fi70, the Ravebox puts out an insane audio experience. It’s easily the loudest speaker I’ve ever heard and will be perfect as the main audio source for a large outdoor gathering. 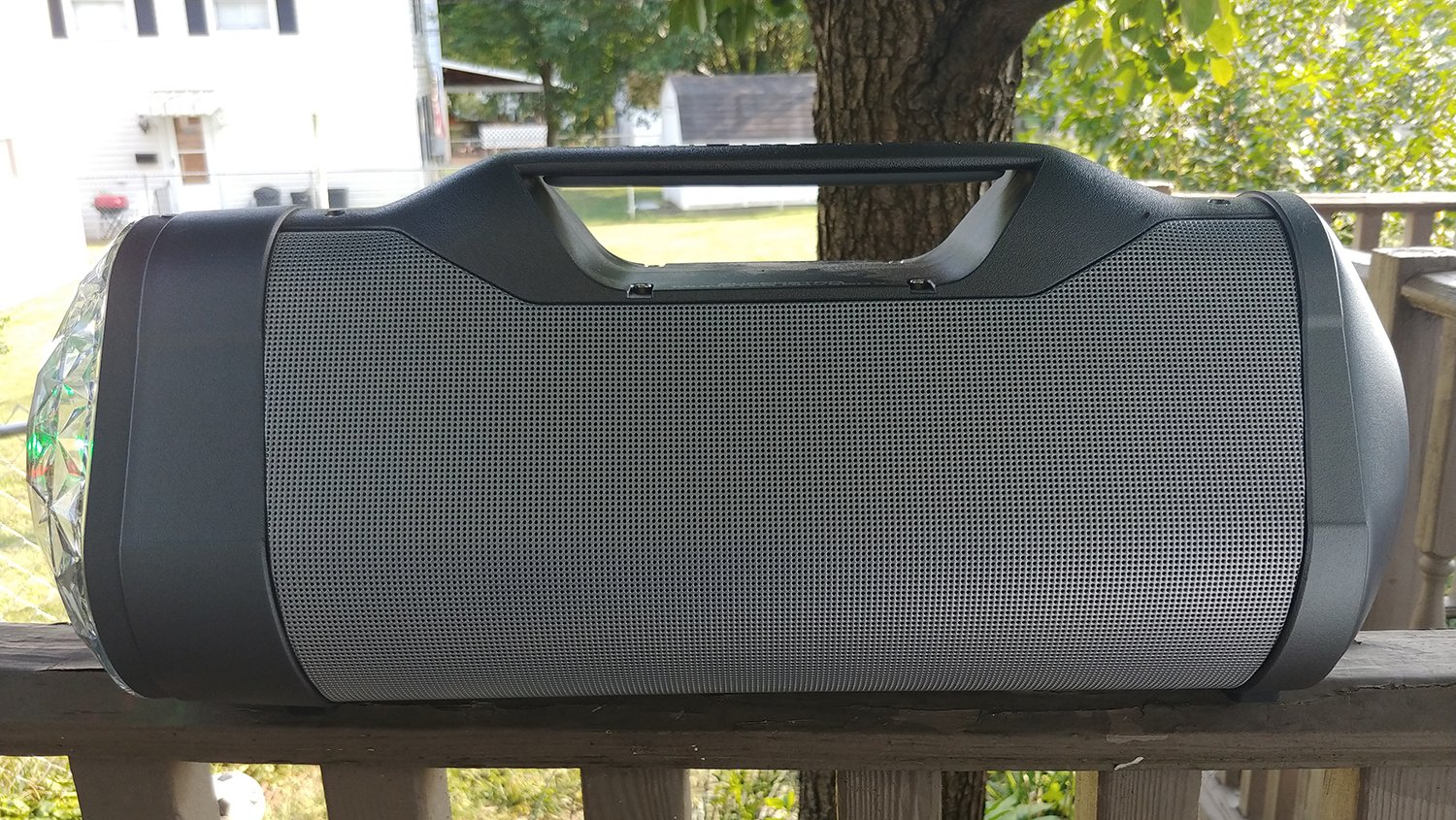 The Ravebox gets pretty loud and bass is extremely well represented. The only thing keeping this thing from vibrating off the table is its very noticeable heft. Highs, mids, and lows are all pleasing and well represented. There’s no muddy bass or screeching highs to be worried about like in some other big Bluetooth speakers. If you’re going to be expected to pay something crazy like $449.95 for a Bluetooth speaker then it’s going to need extremely high audio quality and Monster checked the box there.

Another area where Monster can hang its hat is build quality. This thing is an absolute tank. It’s heavy as all get-out (16 lbs), but the handle on top helps for portability. It would be damn near impossible to carry it around with the handle due to how long and heavy it is. The hard plastic is great for long-term durability and keeping the speaker lighter than it could’ve otherwise been. 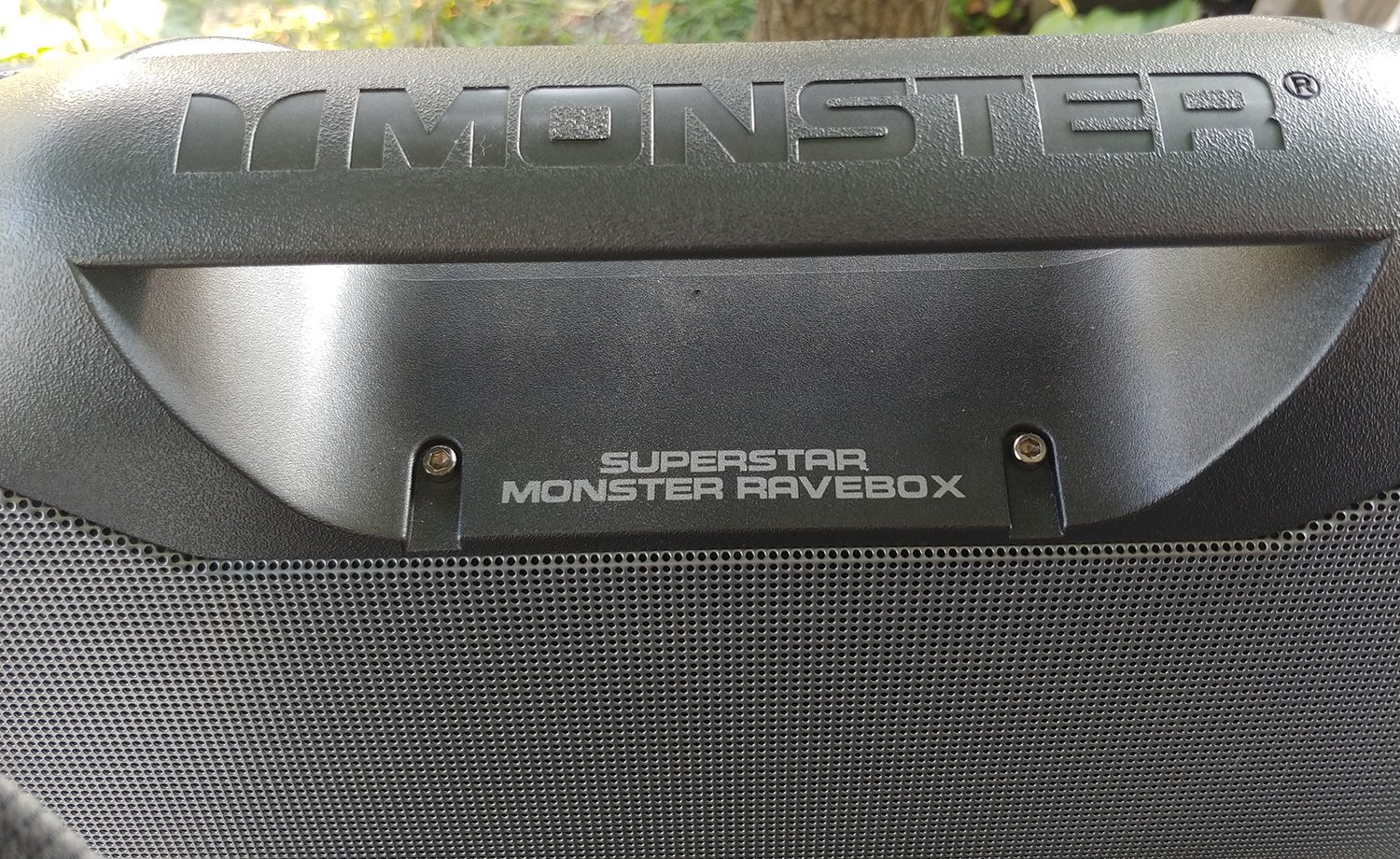 The Ravebox comes rated at IPx5 which means it’s water resistant. Monster claims it will perform wonderfully even in a torrential rainstorm but I’m not sure I’d risk something this expensive without a true IP68 rating. If you do break your speaker through water damage or some other fault of your own, Monster offers a one-time replacement for orders placed from its website. That’s a pretty excellent hidden feature.

Water resistance is almost a requirement at this price point as leaving out any essential features when asking a premium price would be assinine. It also comes with a gigantic disco ball on the end which is not essential, but it is amazing.

The light that comes from the “kaleidoscope of sight and sound” as Monster describes it, pulses to the beat of your music. If you’re listening to pounding and pulsing EDM, the light is going to be harsh and abrasive like you might find at a rave. If you’re listening to more chill music, you’re going to get a smooth and soothing light show. It really adds to the experience but it’s not the killer feature that Monster might make it out to be. It’s nice to have and my five-year-old loves it, but it’s just a party trick. 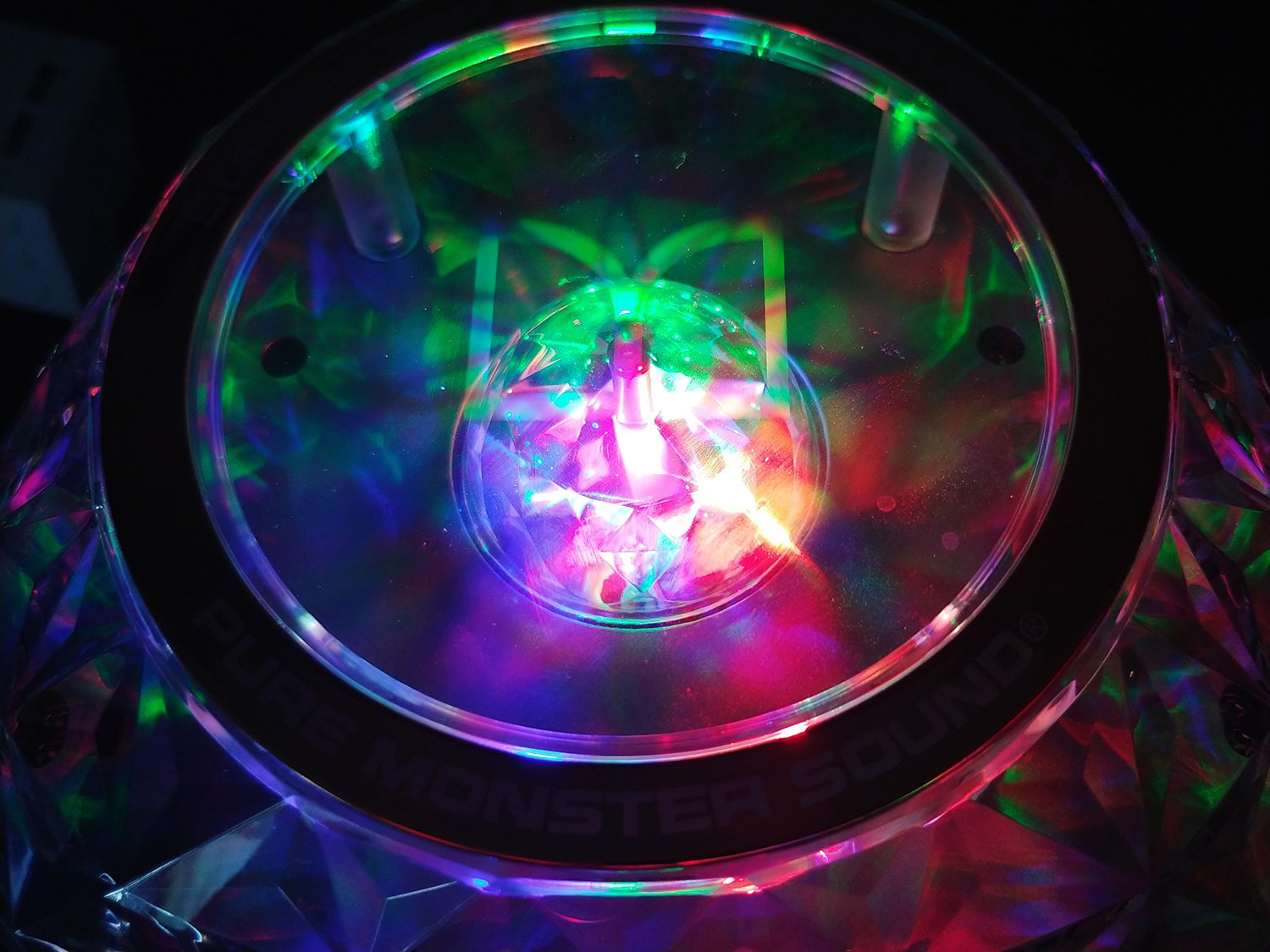 While Monster may have killed it in audio and build quality, I think there are improvements that can be made. First off, this thing is made for parties with the light show and massive sound, where’s our mic for karaoke? This seems like such an obvious addition that it could be a huge marketing advantage over other speakers.

Additionally, the Bluetooth connection is something that I believe should be worked on for future revisions. You get the standard 30 or so feet of range, but if you put anything between your phone and the speaker, like say a wall, you’re in for some trouble. It didn’t reliably cut out for me, but there were some drops. When you’re controlling the entertainment for a big outdoor party, that can be a killer.

I almost overlooked that there were no play, pause, and advance track buttons on the Ravebox. I suppose I never use them so I didn’t notice at first, but this seems like a weird omission. Monster is trying to market the Superstar Ravebox as the spiritual successor to the boom boxes of old, but when I think of those boom boxes, I think of switches and sliders and things sticking out from the face. It’s the complete opposite here. 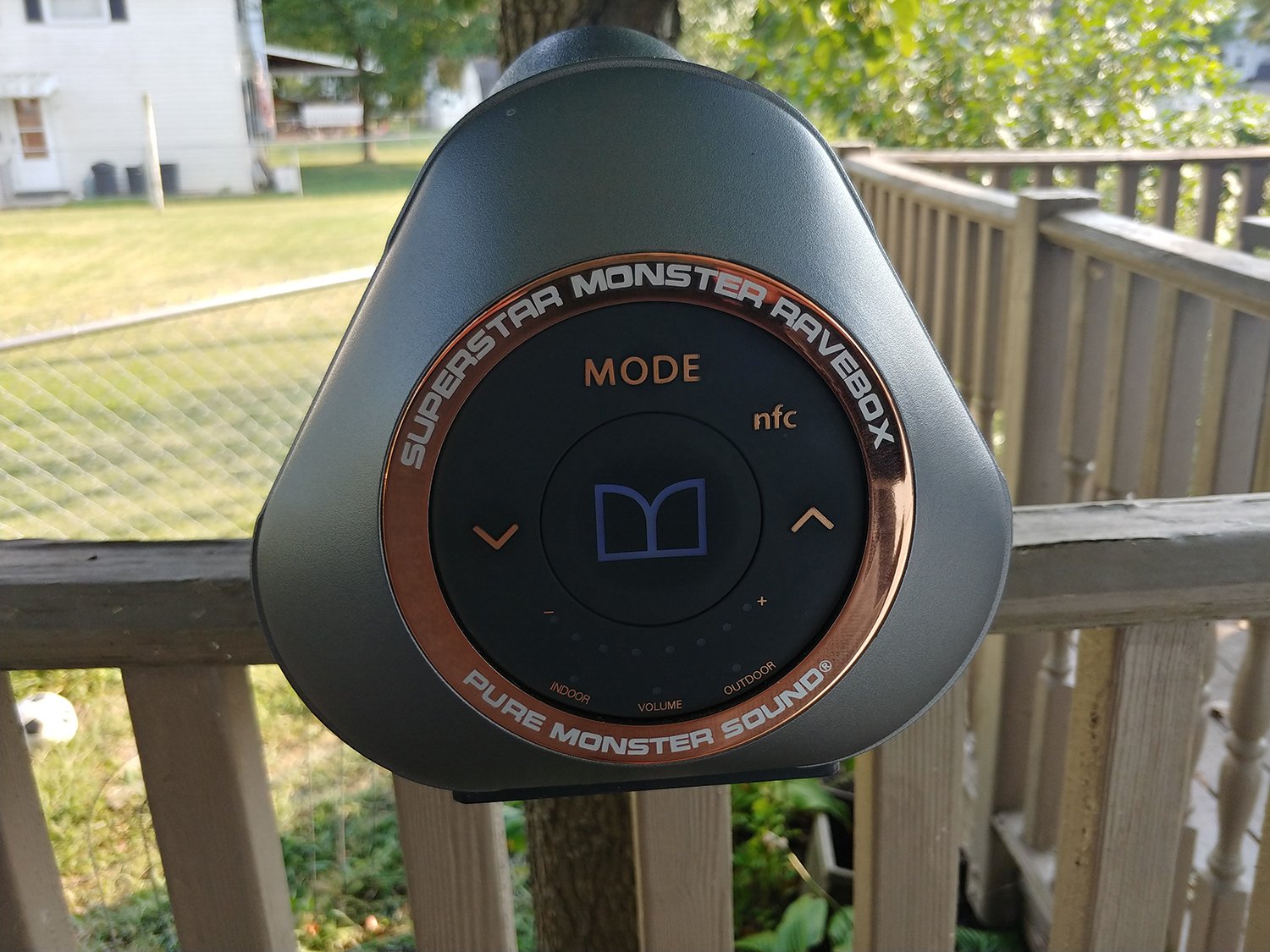 The biggest issue, for me anyway, is the price. This is an amazing speaker and is definitely one of the best on the market, but are you going to pay $450 for a Bluetooth speaker? If you have the money, I say go for it but I think it’s out of reach for most people. Hilariously, Monster is financing for the Superstar Ravebox for only $28 a month on its website. Financing a Bluetooth speaker is something I hadn’t ever really considered before.

If you’re interested in picking up the Monster Superstar Ravebox, head on over to Monster’s website or Amazon.