Whether it’s an evolution of smartphone use, the lack of battery life on the latest smartphones, or a combination of both, we need to charge our devices more than ever. The problem is we need an outlet nearby to juice up our device(s). That brings us to portable power banks, such as the one we have to review. Moshi was kind enough to send us an IonBank 5K with microUSB connector to review. So let’s take a look and see how it stacks up.

Moshi always seems to have high quality products and the IonBank 5K is no different. Most power banks you see around are made entirely of plastic, which is where Moshi’s differs. The top and bottom are made of anodized aluminum, so it protects the goods very well. It has a nice texture to it and isn’t as slippery as you’d think. Honestly, it would be nice if some metal smartphones had this same texture. 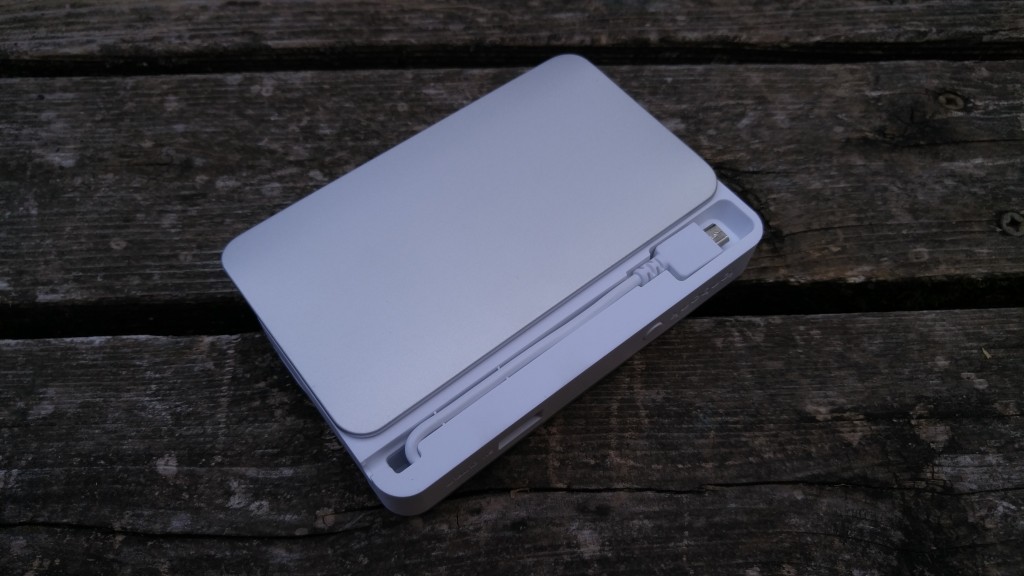 One area where the design of the Moshi IonBank 5K really excels at is hiding cords. Without taking out the charging cable or microUSB cable, there are no cords to be found. The device is a perfect rectangle, that is until you slide the bottom out. It reminds me of my smartphone slider days and is actually a very intuitive way to expose the microUSB cord. Once the cord is out, the slider can close and still allow the microUSB cord to charge a device. The charging cable for the IonBank 5K is found on the opposite and conveniently slides into the plastic edge. 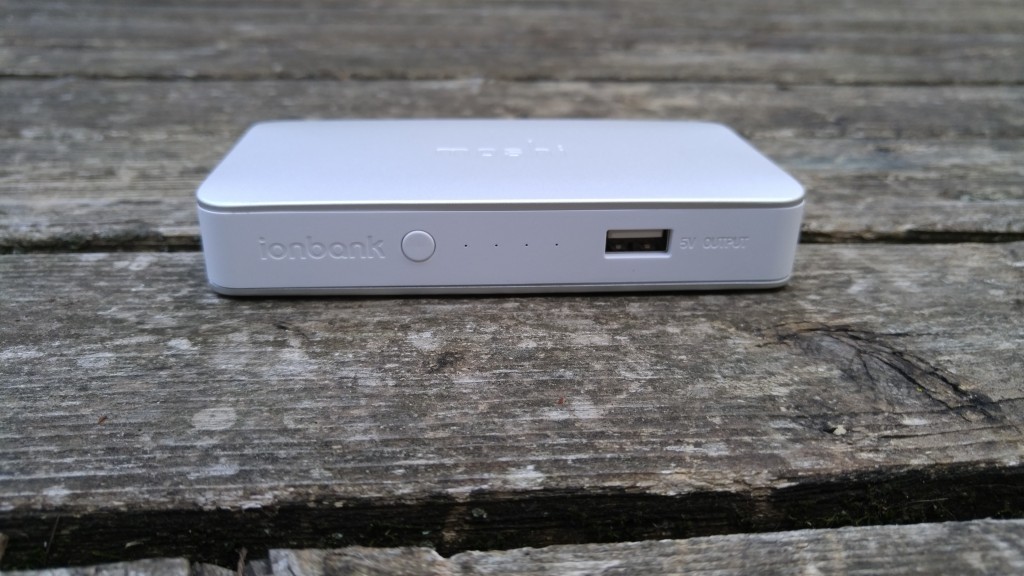 Another interesting design feature is that the device has a battery life indicator built into the side of the device. There are four small LED lights to represent how full the battery is. To activate the device or just check how much juice is left in the tank, press the button once. 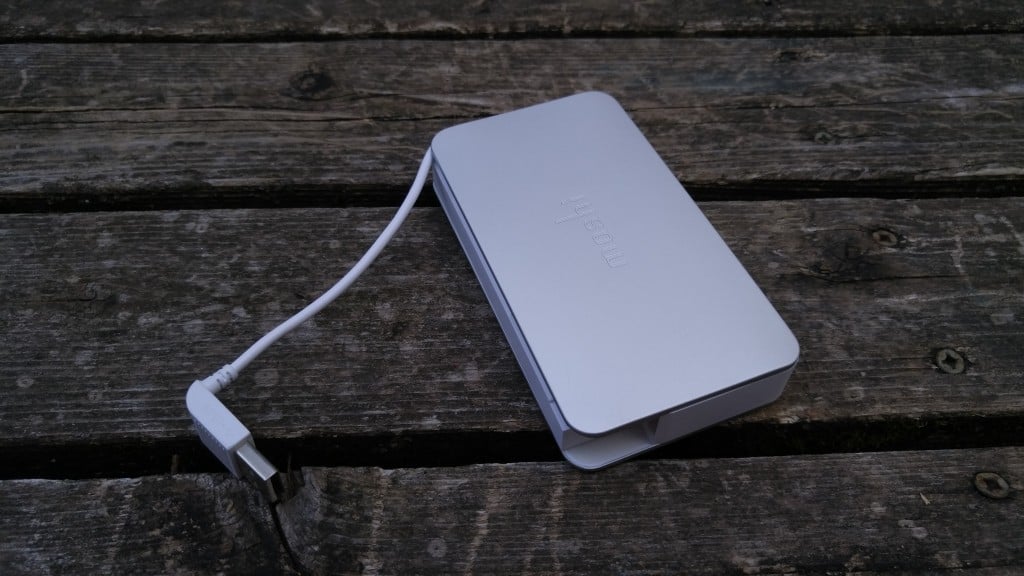 Right next door to the battery level indicator is a USB port, just in case. That means you can charge your friend’s iPhone, provided he brought a cord. I’m sure they did, because those things need to be charged all the time, but I digress. What’s nice is you are actually able to charge two devices at the same time.

The performance of the device is actually quite impressive. It holds a large 5,000 mAh lithium polymer cell, which is good for charging most Android phones nearly two times. One thing I was surprised with was that how quick it would charge my device. Moshi doesn’t advertise this as a quick charging bank, but it sure seems like it. It can power my Samsung Galaxy Note 5 at more than 1% per minute, which is quite impressive. 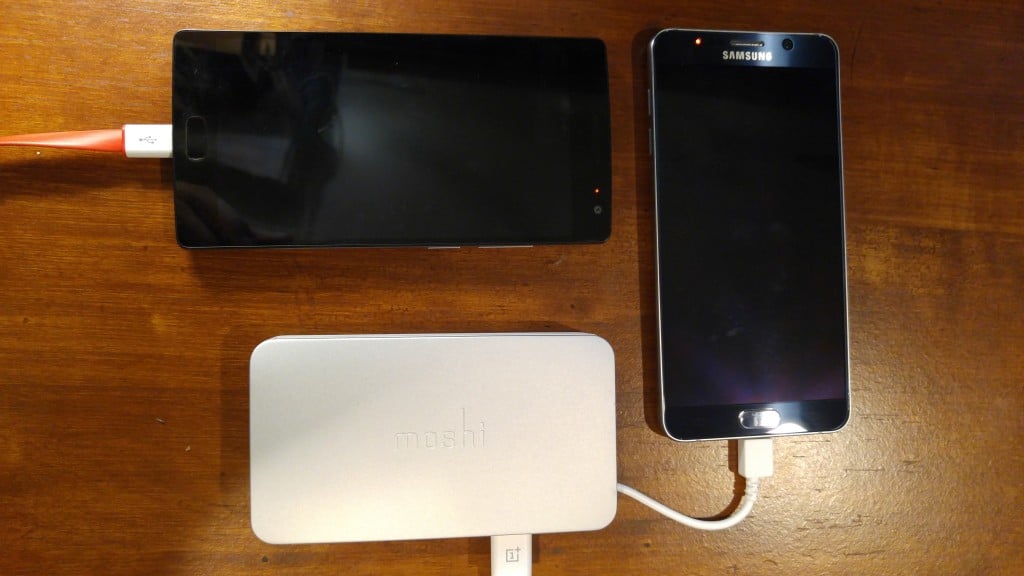 One thing to note about the power bank when charging two devices at the same time, is make sure the USB port doesn’t get too warm. When I tried charging my OnePlus 2 through it (USB Type-C), the connector seemed to get very warm. To make sure it wasn’t just the OP2, I through my G4 on the charger and the same thing happened. When putting out power, the device itself gets a little warm, but nothing to worry about.

If you are in the market for a power bank, look no further than the Moshi IonBank 5K. Not only is it very stylish and physically appealing, it performs just as well. The power bank being flanked by anodized aluminum on either side makes it look for nice and protects the internals. The IonBank 5K can definitely back up performance with looks by charging a device with around a 1% per minute ratio, which is very nice when are outlet isn’t nearby.

The only thing about the device is that since it is a premium product, there is a premium price for it. Currently you can buy the Moshi IonBank 5K on the official Moshi website for $88.95 or on Amazon for one cent cheaper at $88.94. It is Prime eligible.