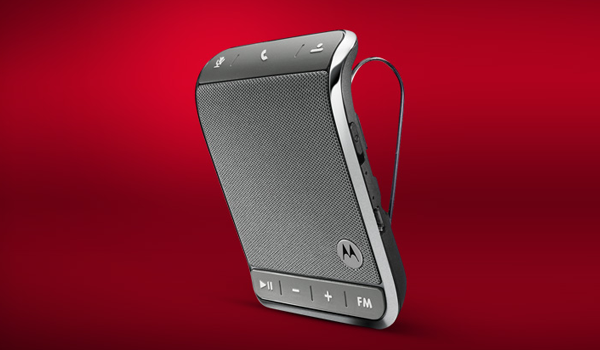 Did you know that June is considered Responsible Driving month?  No?  Now you do.  Did you know that you can save yourself all kinds of potential trouble on the road by having a Bluetooth speakerphone in the car with you?  Yeah, we figured you knew that much.  Here’s one – did you know that Motorola’s Roadster 2 is one of the best devices in class?  We know, because we’ve reviewed one.

[quote_left] Use promo code ThumbsUp in June and save 20% at Motorola.com [/quote_left]We’ll not bore you with describing what a Bluetooth speakerphone is because, fundamentally, they are all pretty much the same.  We will tell you, however, some of the things that we enjoyed with the Motorola Roadster 2 Universal Bluetooth In-Car Speakerphone.

The FM transmitter is one of the first features we look for in Bluetooth devices for cars as it allows you channel your phone audio throughout the car.  Prefer to listen to Slacker, Stitcher, or Pandora instead of the local radio?  This is the type of feature that allow for that. Once you get used to having this in a car accessory you return to it time and again.  On a more practical note, it lets the driver (and passengers) hear conversations much louder and clearer than they would normally have through speakerphone.  The Roadster 2’s speaker is louder and clearer than whatever you get from a normal phone experience, however it’s not rich in bass or anything fancy.  You’re not watching movies or playing games here so it’s really a non-issue. 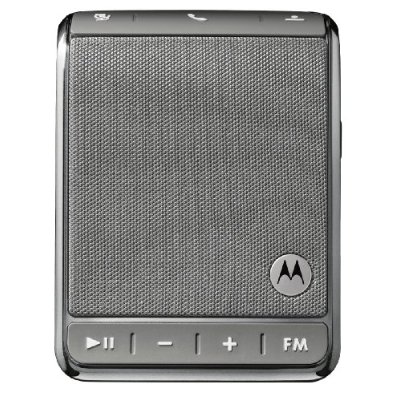 We also appreciate the ability to connect two smartphones to the Roadster 2 as it allows us to share the tech with others in the car.  We stayed extra responsible and hands-free when we let our navigator (passenger) pull up turn-by-turn maps and play with the music. Should either one of our phones ring, we use the speakerphone and connect easily, using only voice.

Speaking of voice (get it?), the Roadster 2 lets users answer and ignore calls, have text messages read aloud, respond to texts via voice, and more.  There’s a wonderful app in Google Play that really enhances this experience so do grab that when you order your device. What’s more, the Find My Car app from Motorola marks your parked location and guides you back when you are ready to leave.

Battery life promises up to 20 hours of talk time and/or three weeks of standby time.  Seeing as how our phones never last that long, we’ve yet to deplete the battery.  We simply charge both at the same time and don’t worry about the speakerphone.  Charging is done via microUSB and take no time at all.

Motorola’s retail price for the Roadster 2 Universal Bluetooth In-Car Speakerphone is $99.99 however Amazon has them for about $75 right now.  Grab one in the name of Responsible Driving and do your part!