Navigation units are a dime a dozen now. With the introduction of GPS on our smartphones and technology like Android Auto, fewer and fewer people are using dedicated GPS units. One area where smartphone GPS has yet to conquer is with the off-road aficionados. Magellan looks to fill that void with the Magellan eXplorist TRX7.

Essentially the Magellan eXplorist TRX7 is a 7-inch Android-based tablet with GPS. However, it is not designed to be used as a tablet, but as a dedicated off-road GPS navigation device. This becomes apparent when one notices that there is no application store and the included apps are very basic. 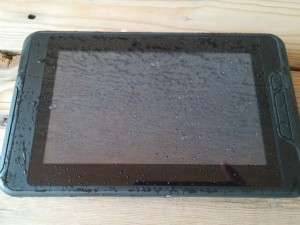 The hardware is low to mid range. It has a 7″ 720p screen, 1GB of Ram, 16GB of onboard memory and it also comes with a micro-SD card slot for expandable memory. It’s encased in a ruggedized IP67 waterproof casing and the whole thing is married together with Android 4.2.2.

There are four physical buttons located on the front of the TRX7, but one of them is for a camera that is not present on the device. The other three are the home, menu and back buttons. There are also volume controls and a power button located on the left side of the unit. 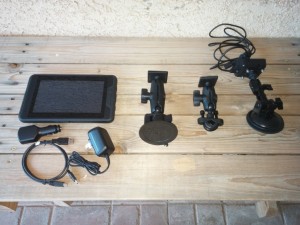 As it is designed for off-road navigation, it is available in three different configurations. Or better yet, it is available with three different mounts. The first is a windshield suction type mount. The second is a Genuine Ram Handlebar Rail Mount and the third is a Genuine Ram Windshield Suction Cup Mount. All three of the mounts are much sturdier than most other mounts on the market, but the Ram mounts take things to another level.

The Magellan eXplorist TRX7 is preloaded with over 44,000 routes from forest and public lands. While the TRX7 can be used right of the box, it is meant to be used with their crowdsourced web service. By visiting www.mytrxjournal.com you can save trails that you want to explore and drop pins on the map where you would like to visit. You can also rate trails that you have tried and even upload your own trails to the site from your TRX7 for other people to try.

If you’re familiar with using a Phillips’ head screwdriver and can follow instructions then setting up your TRX7 isn’t too big of an ordeal. However, if you’re not, it’s best to get some help from someone who is.

The very first thing that you need to do is assemble your mount. It comes mostly put together, but there is a docking head that will need to be attached to the mount.

You will also need to setup your account on the device or www.mytrxjournal.com. Either way, you’ll still need to sign in on the device.

Finally, you’ll need to mount the dock on or in whichever vehicle you’ll be using. 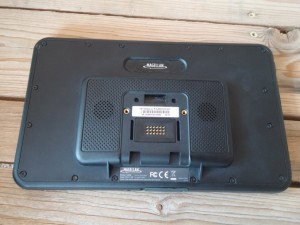 First off, let me tell you that I’m not a big off-roader. I enjoy the occasional trip to the mountains or in the desert, but mostly I keep to in-town roads. It’s here that I think Magellan missed a huge opportunity. Because the TRX7 is Android based, it would have been a simple proposition to add on-road navigation as well. In the very least, they could have installed their own app store and offered it as a paid download. To me, it doesn’t make much sense to purchase both an on-road and an off-road navigation device, when the one is perfectly capable of doing both.

Luckily it’s an easy enough proposition to download the Amazon app store and install a third party navigation app. You can even download Google Maps from an APK archival site and use that for your navigation. However, without Google Play Services installed on the device, you won’t be able to use the maps offline.

Another gripe that I have is the lack of an accelerometer. Because of that, you can’t change the devices orientation without the help of an app. Depending on the vehicle you’re using this could be the cause of an inconvenience. 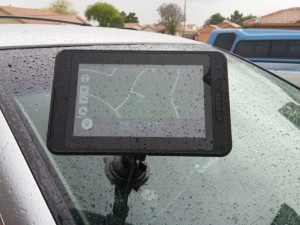 Ok, my complaining is done. Let me tell you what’s great about this device. First of all, the screen can be viewed from any angle without any changes to the color or brightness of the screen. When the screen is clean it has pretty good visibility, but it it is prone to fingerprints and smudges. When the light hits it at the right angle it can be hard to see when the screen is not clean.

Another thing that I love about the TRX7 are the physical buttons. It comes with a home, back, and menu button as well as a camera button. The camera button doesn’t do anything at the moment. The TRX7 does not have a camera. In the manual, it says that the button is for a feature in a future release. Maybe a screenshot button? 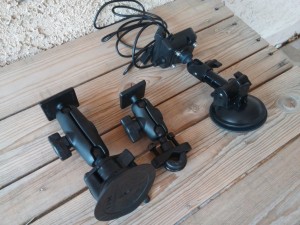 All of the vehicle mounts available are very sturdy. The Ram mounts especially. The suction on the Ram windshield mount was so strong that I was able to use it to pull a dent out the bumper on my wife’s minivan.

A big part of the device is the TRX app that comes installed on the device. There are a ton of features and the best part is that you can try it out now on your current Android device. It is available for free on Google Play with a 4.2-star rating. In short the app is easy enough to use, but it could use a tutorial for those who are not as intuitive. 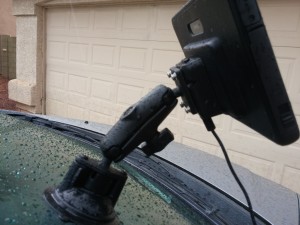 As an offroad navigation unit the TRX7 works extremely well, but the unit itself, in my opinion, at $649 is a little overpriced, especially when you consider that the TRX app is available for free on Google Play. So in reality, the $649 you pay is for the hardware and considering that, they should have stepped up and included Google Play integration, on-road navigation, Android 5.1 or newer, 1080p screen, and an accelerometer. 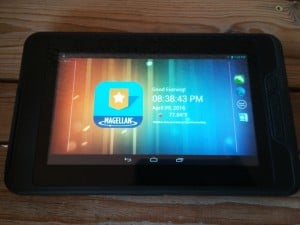 My recommendation would be to try out the app on Google Play before your plop down six and a half big ones for the device.