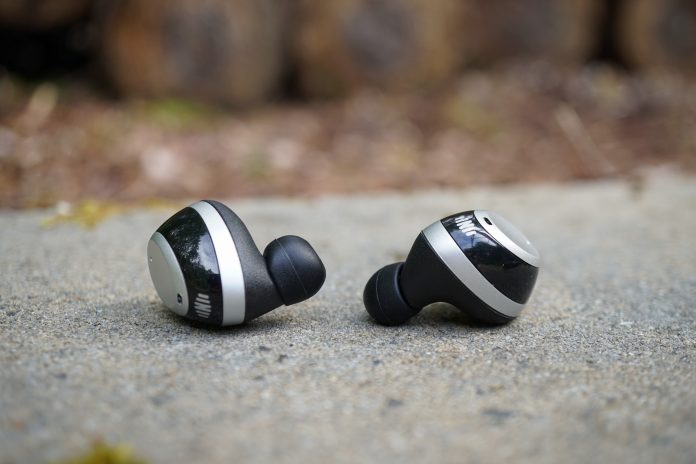 Headphones are generally simple devices, with the purpose of intimately pumping tunes into our ears. In recent years, we’ve seen several updates to the traditional formula, such as wire-cut solutions and active noise-cancellation, but the general idea remains.

However, if you’ve taken a deeper look, a couple cool developments have also risen to make the headphone more than what is dictated by its musical roots. The Nuheara IQbuds are one of these innovative selected few. 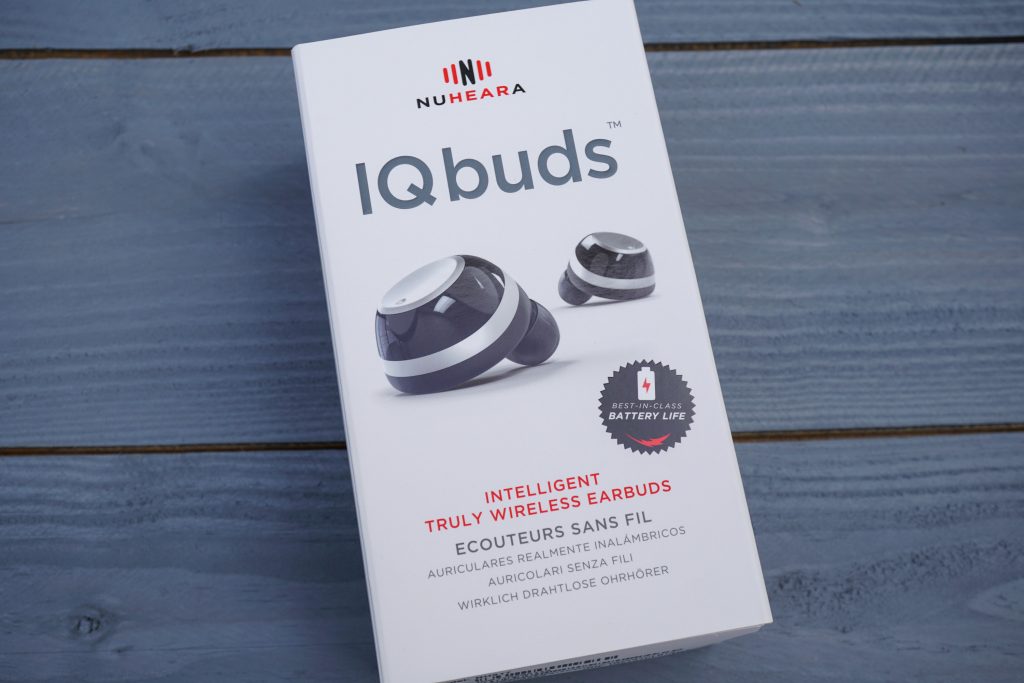 On the surface, the Nuheara IQbuds aren’t a big deviation from the slew of true wireless earbuds we’ve seen emerge as of late. That is, an entirely plastic construction and basic, pod-like shape. Nuheara has adopted a lot of what works for this type of headphone, such as a compact and ergonomic design. The earpieces have maybe a bit more girth than average, but this is expected from the extra technology packed in. 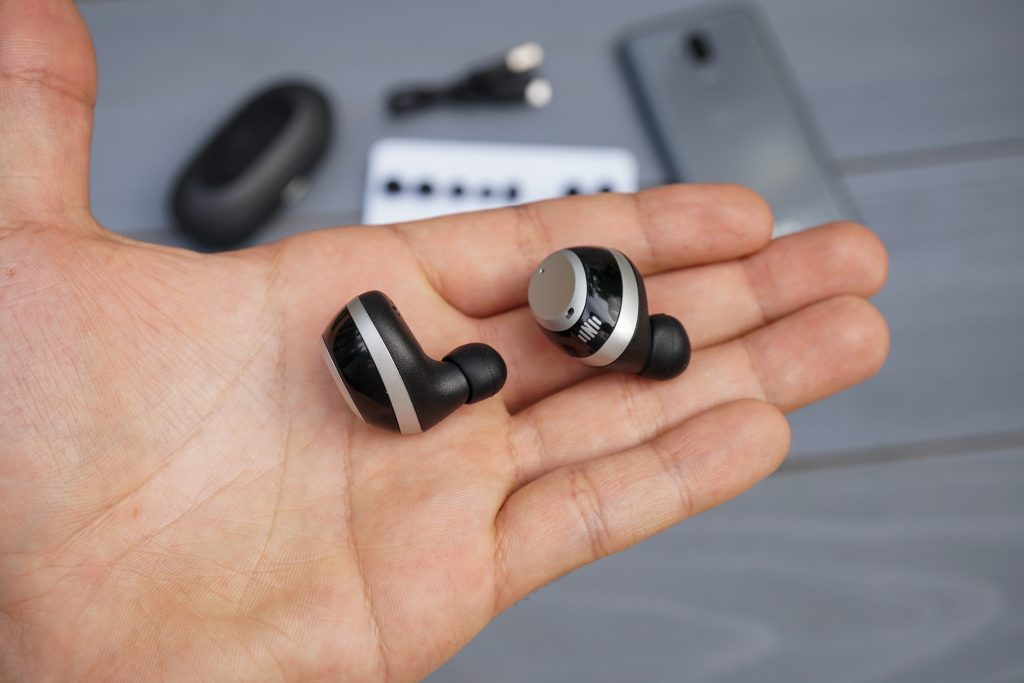 You’ll also see the common series of electrical plates on their undersides. These match up with corresponding pins within carrying case for effortless charging. A note is that unlike many of the type, the silos for the buds don’t have a latching mechanism (i.e. magnetic or clip). You get a lack of finesse sense, as the buds easily wobble when seated. However, the tolerance is tight enough that the contact points reliably match up, and closing the lid locks the buds in place. 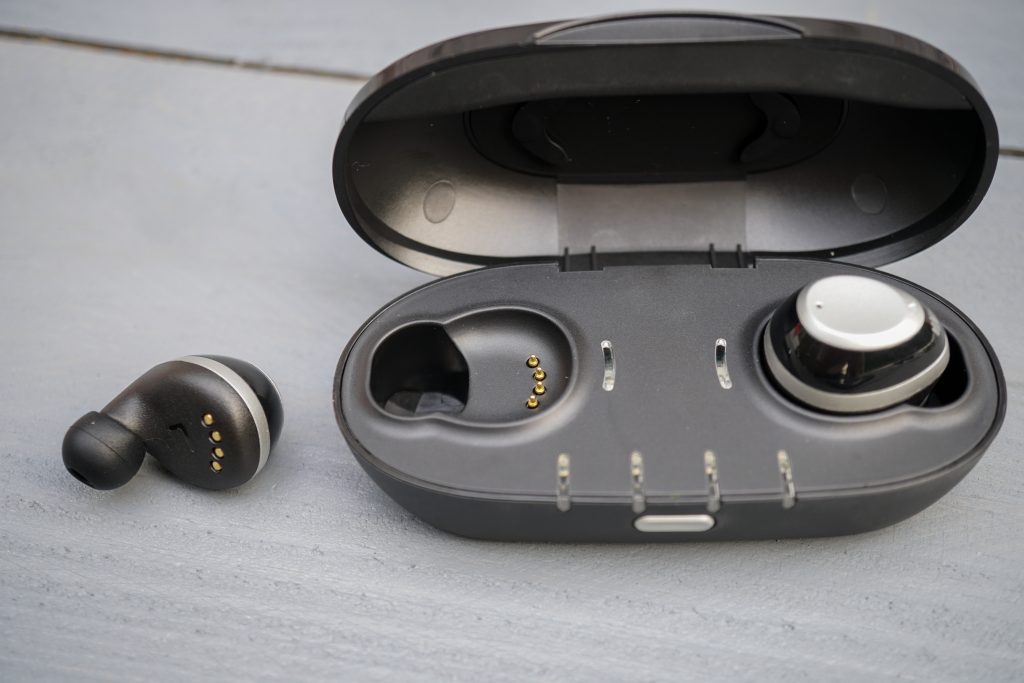 In typical fashion, the case has its own battery pack, able to charge the IQbuds 4x over (at about 5 hours of playback at a time, that’s 20 hours from a full case). This is great, but if you care about slimness, the case may be a bit thick for your taste. It’s definitely pocket-able, but you’ll have a clear bulge (may be especially concerning for skinny jean wearers).

Nuheara didn’t go easy on the case’s LED indicators. There are six sizable lights in total (which switch between red and green), and it can look like a light show when they’re all lit up. 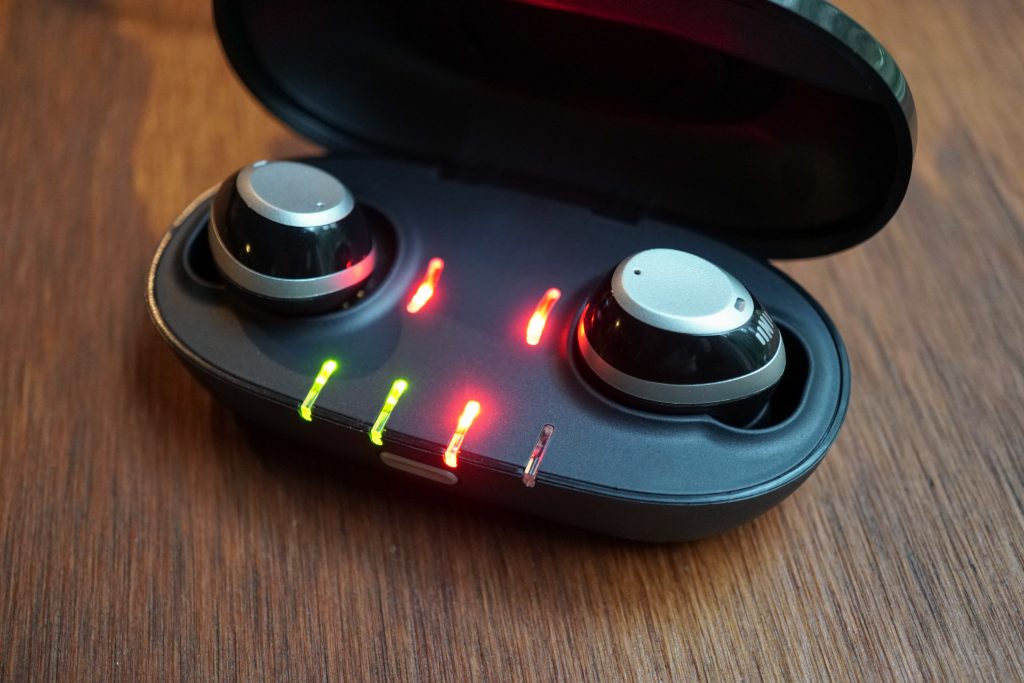 It’s not complicated; there are three indications shown. The two red interior lights are dedicated to the status of their corresponding earpieces (red for charging and green for fully charged). The four at the front display whether the case is open or not. They’re mainly used to show battery level of the case (they light up green from left to right per 25% of battery capacity). However, every time you place the buds in and close the lid, you’ll see a left and right flash of red (the buds are charging) or green (the buds are already fully charged).

Also included in the box is a very generous selection of ear tips. There are no foam tips, but four different sizes of either round or oval silicone tips. We had no problem getting a secure and fully-sealing tip.

The IQbuds are top-notch when it comes to fit. The contour of the earpieces match up with the ear opening immaculately, and the angled and appropriately long nozzle (coupled with the various tip sizes) makes for an effortless insertion. You should even be able to work out with them; they stay in place as good as any true wireless earbud that we’ve tried.

Regarding water resistance, Nuheara claims that they’re waterproof but didn’t formally certify them with an IP ingress rating. The company says that the internal components are coated with nano-proof water protection tech that is plentiful, so take that as you will.

The interface of the IQbuds is touch. Both earbuds have a touch panel on their outside surfaces. We’re a little wary of touch controls on true wireless earbuds due to past failed attempts, but it works pretty reliably on the IQbuds. Nuheara limits the number of functions (only within a single tap, double tap, or long tap), so there’s only a slight learning curve.

The left bud just handles play/pause or answering/ending phone calls, while the right bud turns off or switches among the dynamic sound features. Double tapping on either bud toggles the phone’s virtual assistant. One other control is a longer-press, which puts the buds into Pairing mode.

To unlock the capabilities of the IQbuds, you must install the company’s app. Within it, you’ll be able to select between presets to suit your current environment. Nuheara has options for settings we are often in, like the office, traveling, outdoor, etc. These specifically tune the earbuds transmission to be most beneficial in these situations.

For instance, if you’re outdoors, you may want to still be able to hear cars approaching. A typical sound isolation system won’t pick and choose what to isolate (hence, the “intelligence” notion behind the IQbuds), and could potentially make for a dangerous situation if you’re walking about outdoors. You can adjust the audio as you desire (complete silence or more/less ambient noise).

A big advantage of this system is that you can go about your day without having to take the earbuds out. Typically, you have to take your headphones off if someone starts talking to you. This can happen at any point if you continually listen at work. Well, with speech acknowledgment turned on, you can keep the IQ buds on and hear someone clearly (while also still hearing your music clearly). What’s more, you can even amplify speech. That is, magnify speech/noises around you – almost serving as a hearing aid if this would be helpful in a situation (like if you’re awaiting a PA announcement at an airport or train station, but want to keep listening to clear music).

And the tech does work; it’s not just talk. It’s pretty startling at first because you hear music just like any other headphone (the output isn’t messed with). But then selected and amplified frequencies come through at the same time like you have an additional mic embedded. It’s a little trippy at first, but you immediately see the benefit.

You can hear the music clearly but also people talking to you. The customizability is great because you can increase or decrease how much comes through, or just switch it off and use the IQbuds like normal headphones (single tapping the right earpiece turns the “World” setting on/off). Note that when the IQbuds close off the world, their system closes off more than what just passive isolation on a normal earbud would, but not as proficiently as active noise-cancellation tech.

It’s easy to get caught up in the neat audio capabilities of the IQbuds, but being headphones first and foremost, it’s also super important that they sound good playing music. We see Nuheara advertise “high fidelity audio” with the IQbuds, but don’t see mention of the aptX wireless audio codec. So we were interested to hear if they could deliver, or if Nuheara’s focus on other technologies would get the best of them.

Fortunately, they do sound pretty great. We were surprised to find a crisper and more open sound than expected. There’s a nice airy echo to the notes, as well as notable soundstage width and dynamics for a true wireless earbud. Detail retrieval isn’t high-end (we weren’t really expecting this), as there’s a slight looseness at general decay. We feel like Nuheara was more going for presentation, and they nailed an engaging experience.

That said, some may find the bass a bit light. It’s plentifully bodied and has appreciable depth, but the punch (particularly, mid-bass) and extension are understated. This gives an impression of a forward mid-range, but we think it’s just a matter of perception. Speaking of the mids, vocals have a fullness that makes them more catching than instruments in the range. The quality is consistent up through the treble – not the highest detail, but notes hit with authority and dynamics. 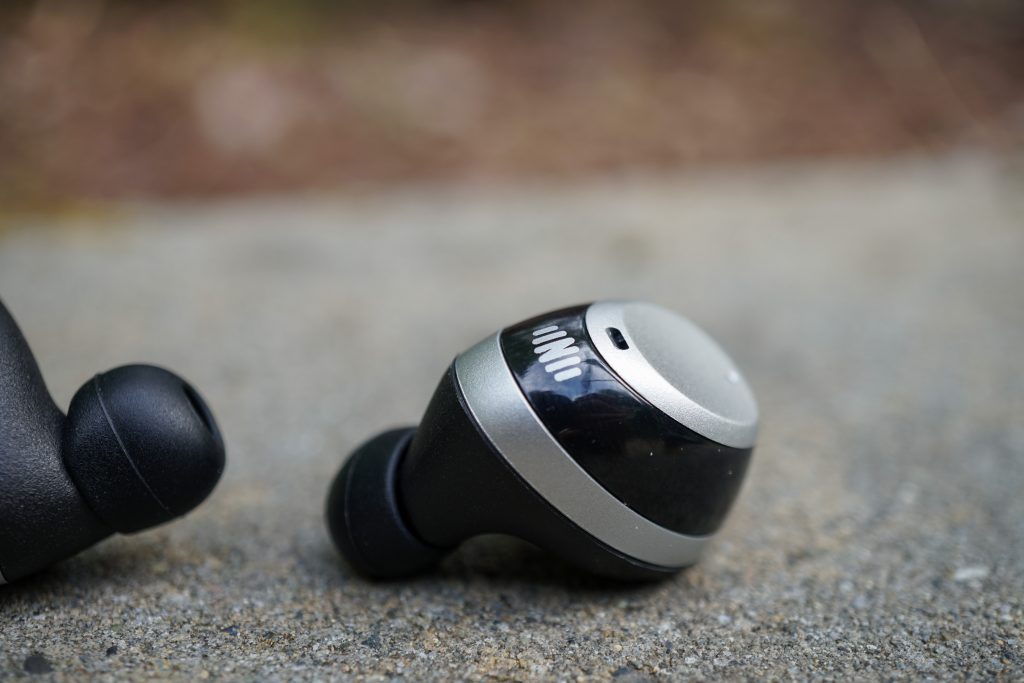 The Nuheara IQbuds are a really cool and unique take on true wireless earbuds. We can’t praise the company enough for going above and beyond, and not just make a solid pair of completely wire-free buds, but also one that has a valuable functional use. We imagine the IQbud’s biggest challenge in the market being price. There’s a lot of decent solutions these days at the $150 range, so asking for roughly double that may be too much.

That said, others don’t have the sweet tech that the IQbuds pack. It’ll be up to you if that’s worth the extra cost. What certainly helps is that Nuheara didn’t push back design, ergonomics, or sound quality to make way for the innovative features. This is a well-crafted headphone.

Cafago deals include $25 UrBeats 3, half off face masks