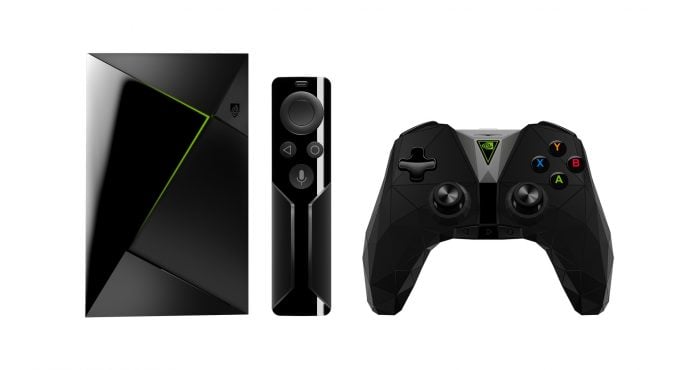 Nvidia is known for their desktop GPUs but they also have their line of Shield-branded Android devices such as the Shield Tablet and the Shield portable gaming device. One device, the Shield TV set-top box, was recently added to the roster as an Android TV device that you can stream your media on as well as do some light gaming. The latest Nvidia Shield TV is a new model for 2017. It’s similar to the older model, but refined and enhanced for 4K and gaming in the living room with cloud-based streaming and more powerful internals.The new Nvidia Shield TV features an excellent redesigned controller as well, which is a dream to use for all game types.

The Shield TV is an Android TV set-top box, running the latest version of the OS. Nvidia touts this Shield TV as the “Ultimate Streamer for Gamers” and the most powerful streaming device available. The specs certainly support that claim, with the powerful Tegra X1 chip, the same that powers the Nintendo Switch. Does the day-to-day experience prove this claim to be true?

Setup for the Shield TV is easy, just plug it in, set it up with your internet and log into your Google Account when prompted. The controller and remote come pre-paired out of the box, so once you’re all logged in and set up with the internet, just enjoy.

The specs for the Sheild TV are pretty robust for a set-top streaming box:

Nvidia has made this new Shield TV smaller by a significant margin, reducing the size closer to a Roku or Apple TV. They also added the remote and redesigned controller to the bundle. The controller itself now feels much better in the hand and isn’t as awkward to use for long gaming sessions.

The remote and controller both feature voice search functionality, and the Shield is compatible with smart home devices like Samsung SmartThings as well. Notable hardware additions include an IR emitter for control over your TV and home theater. The Shield only has 16GB of internal storage but supports USB external storage and can connect to your NAS as well. The biggest new hardware features are 4K and HDR support, Dolby Atmos support, as well as the 4K compatible Chromecast built in.

The Shield TV runs Android TV out of the box, which is either good or bad depending on who you talk to. It’s a perfectly functional set-top box software and has some excellent features like Google Assistant built in, and support for Amazon Video out of the box, a first for Android TV devices. Navigation on Android TV can be a bit wonky, and there is a limited selection of apps. The big players are all available, however, such as Netflix, Sling, YouTube, Hulu, and Plex.

Unfortunately, I don’t have access to a 4K HDR screen at home yet, so I wasn’t able to test out the feature at home. I did, however, get to experience the 4K capabilities during the playtest at GDC I participated in and I found them to be excellent.

Streaming movies and TV aren’t the only things that the Shield can do, however, and if you’re buying this to only use it for that you may want to consider another device. The Shield TV is made by Nvidia, the makers of the most powerful PC GPU on the planet, so of course the Shield is going to be a powerful gaming machine as well. With the Tegra X1 processor powering the Shield it can handle even the most demanding Android games with ease, even better than your phone or tablet. Graphically demanding ported games like Resident Evil 5 on Android run well, but not as well as on dedicated gaming hardware of course.

The killer feature of the Shield is the inclusion of Nvidia GameStream and GeForce Now. GeForce Now is a monthly subscription service similar to the one offered on the Shield Tablet. Essentially a streaming game platform, GeForce Now lets you stream games from the cloud in high quality since the rendering is done by the cloud computing system. You get access to a select number of games for free, and other games are available for purchase as well. There are a ton of great new AAA titles like TitanFall 2 available as well as classics from years ago like Batman: Arkham Asylum.

The library for GeForce now is always expanding, and it allows you to play games as if you had a high-end gaming PC without needing to spend the money. Nvidia GameStream allows you to stream from your local PC with a Nvidia GPU inside to the Shield for couch gaming of your PC library up to 4K if your TV supports it. It works extremely well and supports a large library of games from all genres. The Shield is advertised as the ultimate streaming box for gamers, and it’s clear that they achieved that claim with these gamer-centric features.

Despite all of the niggles with Android TV as an OS, there is very little I had complaints about with the Shield TV. It is small, quiet and powerful with all the features and more that I look for in a set-top box.

The Nvidia Shield is a monster of a streaming device. The 4K HDR support, flexible control options, and powerful processor make it an excellent device for consuming media. Its wheelhouse is definitely gaming and offers great features for even the most demanding gamer appetite. It has done enough for me to replace my Xbox One as my dedicated media machine in the living room. If you’re looking for a robust, powerful streaming box with 4K HDR support and don’t mind the $199 price tag, then definitely have a look at the Shield.