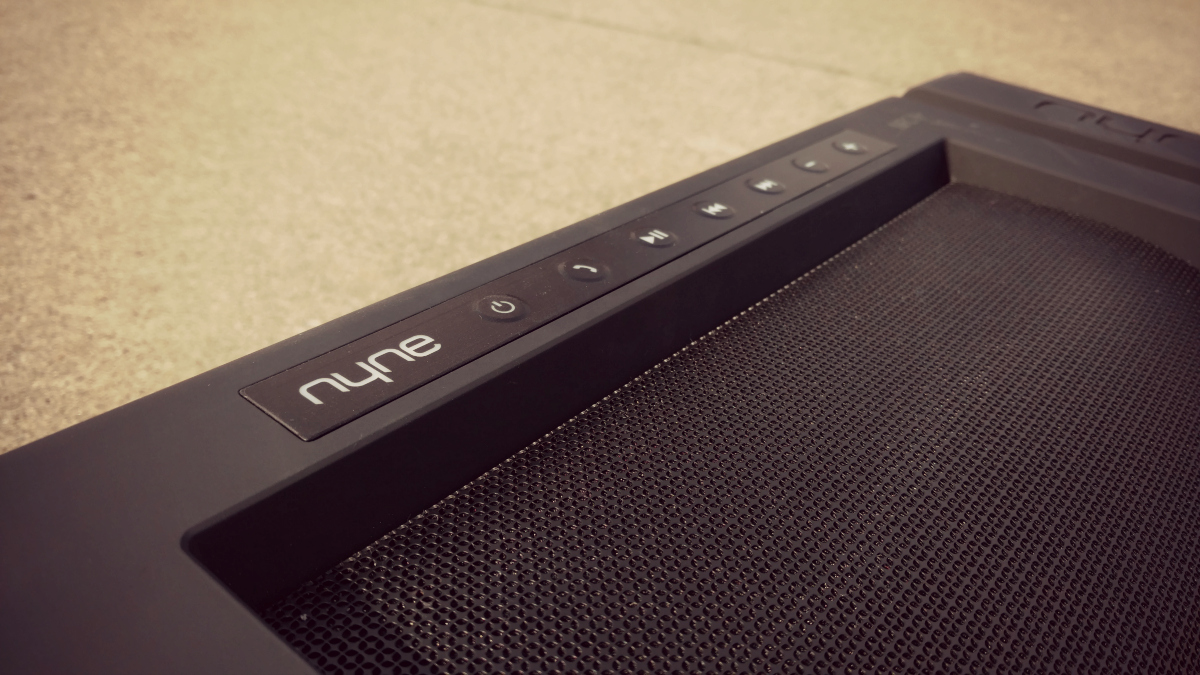 It is pretty easy to make the assumption that a bigger speaker elicits a bigger sound. Why not? Hardware vendors should be squeezing in more bang and boom and taking advantage of the space, no? Actually, you would be surprised at some of the Bluetooth speakers we have reviewed here over the years. It is not always a simple case of bigger being better.

Once in awhile, however, you get your hands on something that definitely pushes out a sound worthy of its size. Such is the case with NYNE ROCK. We’ve been playing with one of these of the last couple of weeks and have really come to appreciate not only the sound, but also the features that come with the speaker. Read on for our review.

First things first, this speaker is huge. It is probably the biggest one that I’ve encountered in the years that I have been reviewing accessories. In my mind I thought this might be a little bit of an overkill because there’s no reason for a Bluetooth speaker to be this big. Right? Alas, I was wrong and there is every reason for something like this.

After just a few days with the NYNE ROCK I pictured having one of these on the deck for our next big social gathering or family outing. Additionally, if you are a tailgater, then this is the first speaker you may wish to consider. It’s big, it’s loud, and it is clear. But that’s just the start.

The ROCK is also equipped to withstand the elements. Indeed this guy can take scuffs and scratches in stride and will work in the rain as well. Yes, the IPX-3 water resistance means it works poolside, too. It’s not the same rough and rugged design you might find in a more waterproof model, but it’s not gonna cry about a light shower.

As is the case with the NYNE Bass we reviewed sometime back, the design is pretty unique. My wife likes to think of the NYNE models as spaceships or alien pods. While you might look at it from the front, the sound comes from what feels like every direction. Get around back, and you will find there is a handle tucked underneath which makes for easy portability and lugging around. 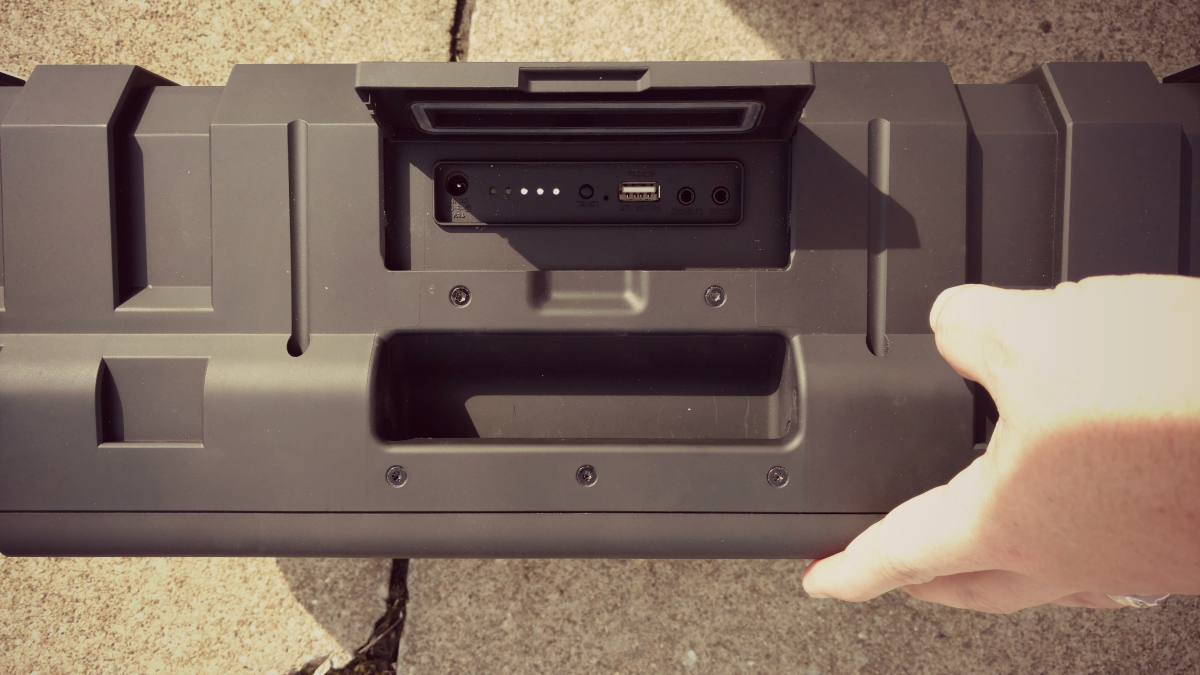 Do know that there is some weight behind this and that it is not a light speaker. Nevertheless, it’s not so awkward that you can’t pick it up and go in a moment’s notice. I have used the speaker in both the home and office setting and appreciate how clear it can be at both the lower level and high volumes.

As to what delivers the sound, the NYNE ROCK houses a 4.1 system with two active drivers, two active tweeters, and a subwoofer. Yes, this is quite the portable party maker. You would expect nothing less out of a speaker that weighs at least 12 pounds. I would say that the sound is just as good has anything else I have tested in the Bluetooth range all products, and that it is even in line with what I find in my SONOS set up.

My wife has taken over the speaker and uses it for her yoga practice. She takes it with her to the various studios where she teaches and uses it to play her playlists while she conducts class. I’ve sat in on one of these classes just to see how it performs in a large room or bigger venue. I was impressed with how clear music played and how connections never dropped, even as she traveled about the room. The sounds was consistently able to fill rooms without problems. And we are talking big, 40′ x 100′ rooms, too. Even in these settings we’ve never pushed this speaker to its limits. 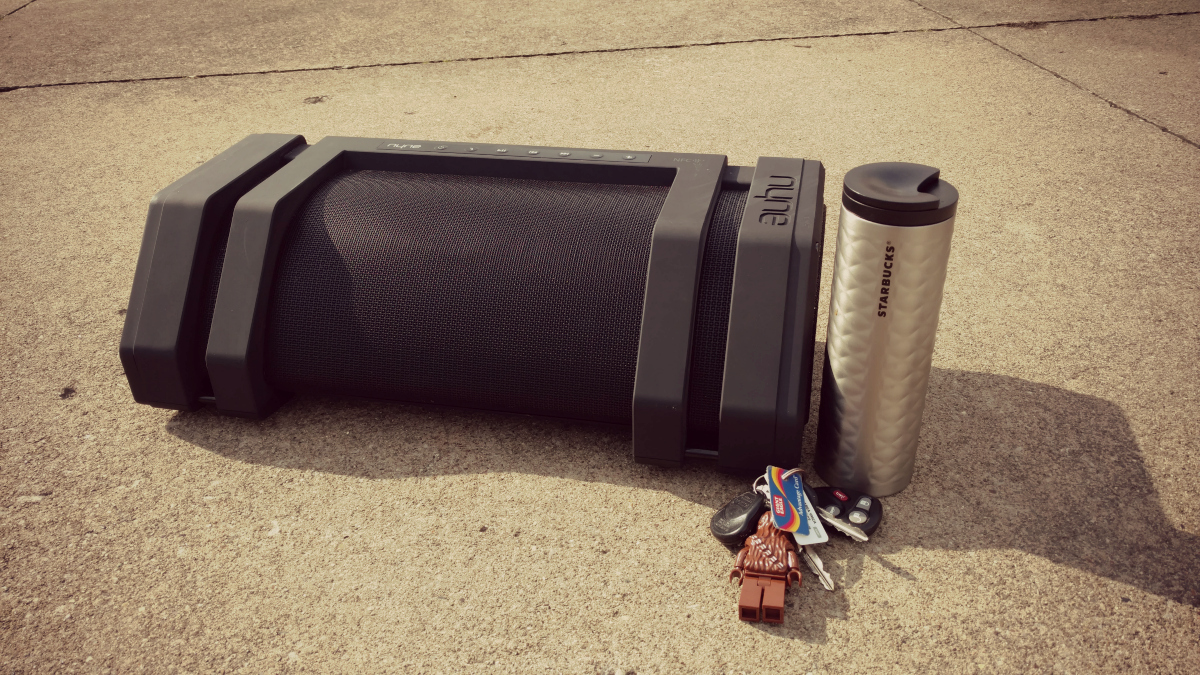 The NYNE ROCK has a matte and rubber-like finish which seems to absorb simple scratches and scuffs. The bottom has 4 pads to keep it still and prevent the speaker from sliding across surfaces. The black material which wraps the speaker does a decent job of staying clean. One of the gripes that I had with the white (NYNE Bass) model I reviewed previously was that it picked up dirt a little easier than I would have liked. While it still likes to pick up oils and lint, the speaker wipes down easily.

Included in the box is the power adapter and 3.5 millimeter auxiliary cable. Yes you can use this to pair wirelessly via Bluetooth, but you can also plug in a media player, phone, or cassette deck for that matter. The NYNE ROCK also boasts NFC connectivity which enables a simple pairing to most smartphones. 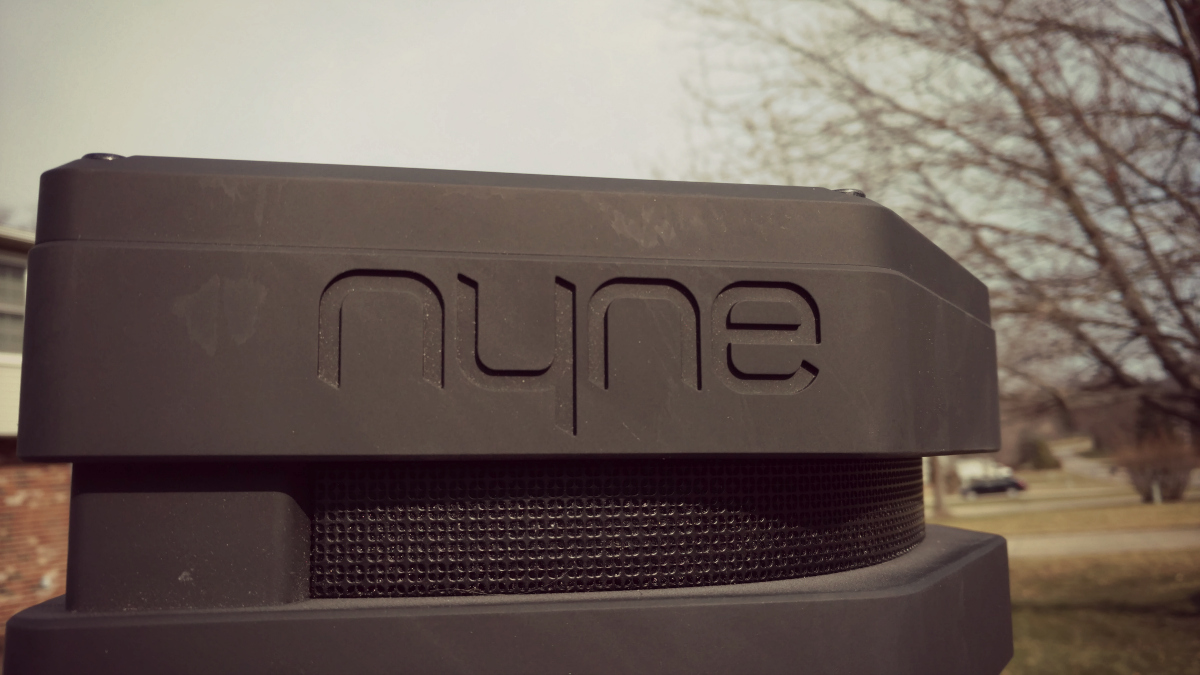 As is to be expected the speaker lets users take phone calls. There’s a built-in microphone that allows for hands-free calling or talking to people. While I did not use this too often, I did find that it worked well.

In thinking of the overall design, it is not the type of speaker you would take out to a party and then expect to take phone calls. The same goes for Sunday afternoon when you’re throwing down some hot dogs and beer in the parking lot. You’re going to want to pump set playlist and not worry about taking that random call from mom. But, should she call you up, you can talk to her right through the speaker.

The battery life on this is listed with 10 hours playtime. I find this to be very accurate, if even on the low end. We’ve only had to charge up a handful of times in the few weeks that we’ve used it; I know that my wife has taken it to yoga practice at least 10 times. I would suggest charging it up once a week just to be safe. Note that there are battery indicators lights on the rear so you can get a sense for what’s left. 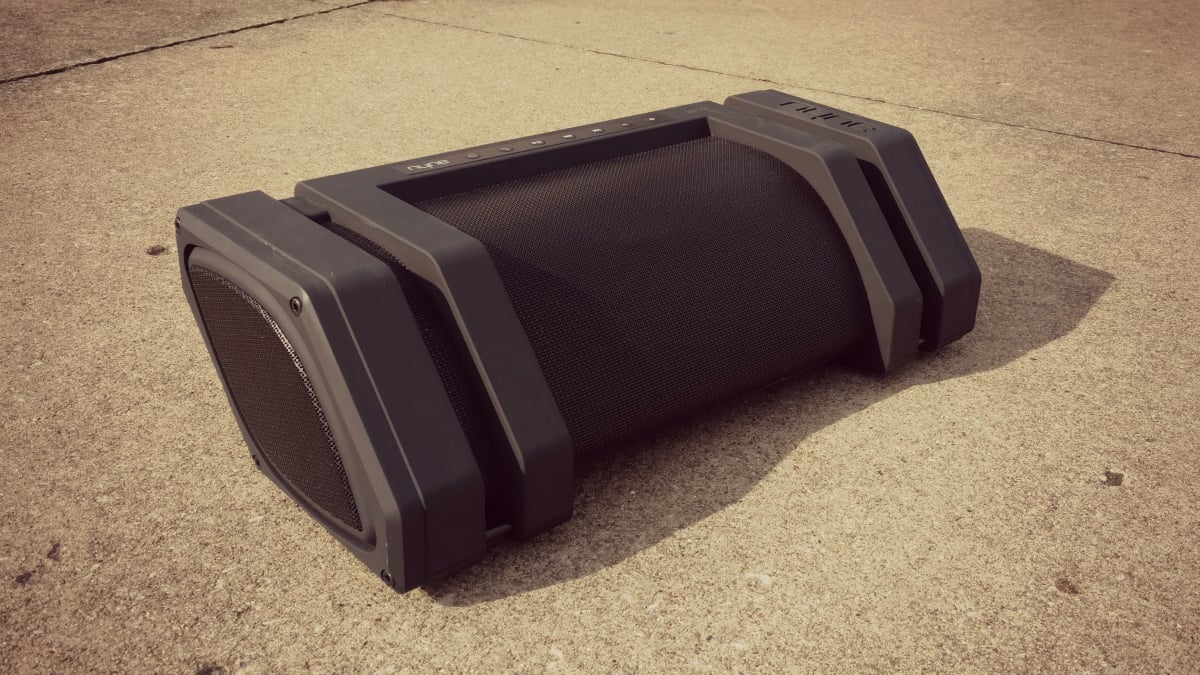 Also around back is an option to plug to charge your phone right off the speaker. This is a nice touch should you find yourself in a situation where you need to juice up a phone and don’t have an outlet. This is a trade-off, of course, which means less playback time.

The Bluetooth 4.0 gives users or listeners a range of about 33 feet, which we also found accurate. Your mileage may vary based off of where your music Source comes from and where your speaker is. If it’s in a standard size room or you expect to be close enough to the speaker to listen, you should have no problems.

When it comes to price, the NYNE ROCK is not cheap. Then again, this is not a cheaply-made speaker. You’ll spend a decent bit of money for it (about $250) (Amazon) but I venture to guess you will be extremely impressed. It will likely outlast your next few phones. And, really, we’ve seen more expensive models that don’t feature the flexibility and sound.