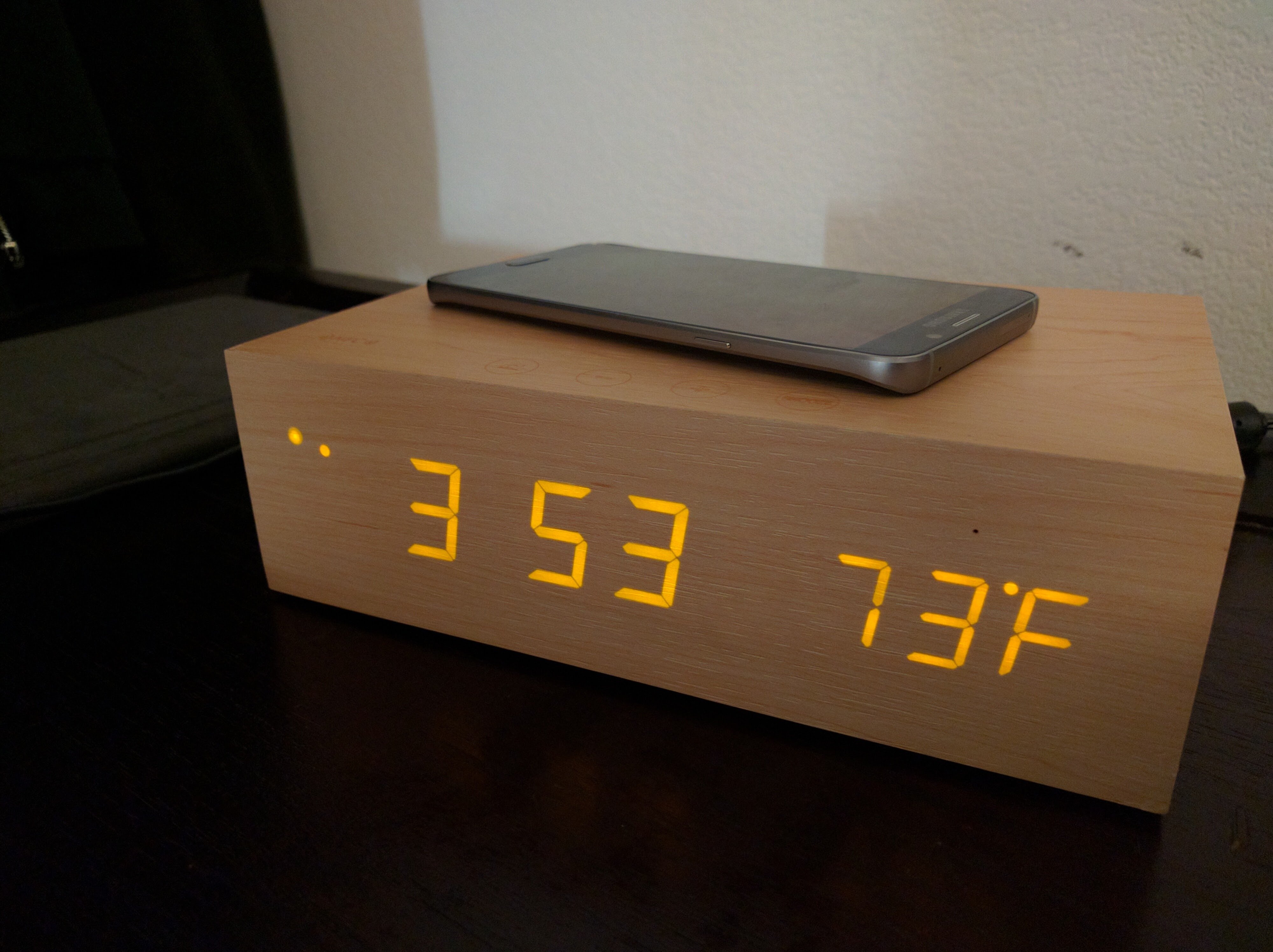 The Olixar Qi-Tone, from Gearzap.com, is all of those rolled into one minimalist package with built-in NFC and Bluetooth for wireless connection. It is all too common to have everything broken out into their individual components, because it makes for better portability and better pricing. But when you’re home, all you want is a minimalist design to keep wires minimized down to one, and you don’t want to have to reach for your phone in order to manage your alarm clock. If you have a wireless charging capable phone, it doesn’t get much simpler than a wireless charger on your nightstand to ensure you’re powered up for the next day.

Having a portable speaker is nice to have as well, but when you’re in your bedroom, you always want the speaker there. It gets old tracking down a portable speaker just to listen to music in bed. All of those problems have been solved with the Olixar Qi-Tone alarm clock. 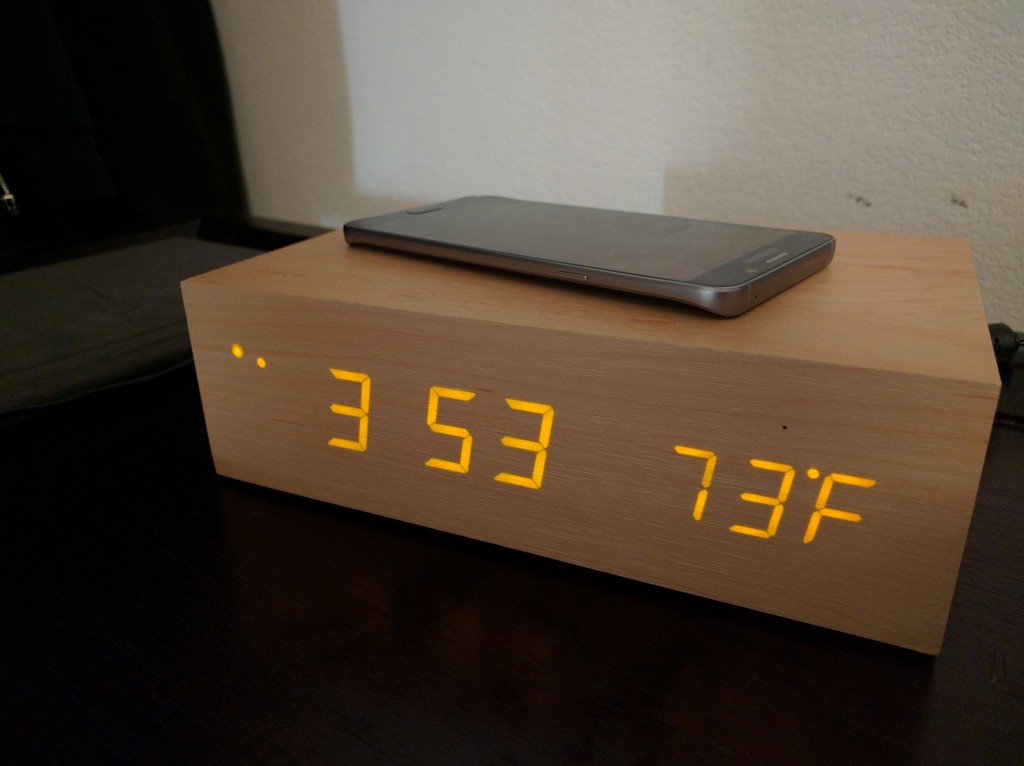 The Olixar Qi-Tone alarm clock is a standard sized alarm clock, in a rectangular package, made from light colored wood. It is actually quite nice to have something with so much complexity look so simple on the outside. This isn’t the 90’s where we have neon lights around our rooms. When the clock is not plugged in, it literally looks like a cigar box made from wood. The front display panel doesn’t have LED cutouts for the temperature or the clock. Once plugged in, the display comes to life in a nice orange color. There’s actually something to that orange color which I will get into more detail later. 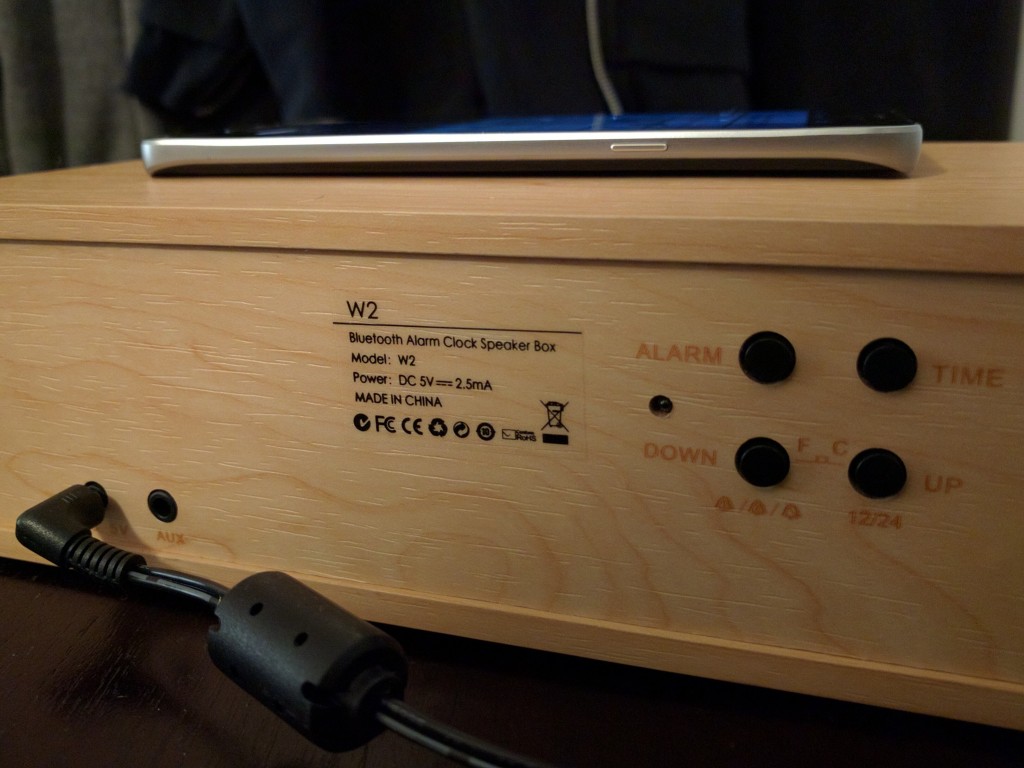 On the backside of the device is where you will find the set-up controls. On the top side are touch controls which allow for NFC tap to connect Bluetooth, snooze, volume up/down and answer or hang up on a phone call. 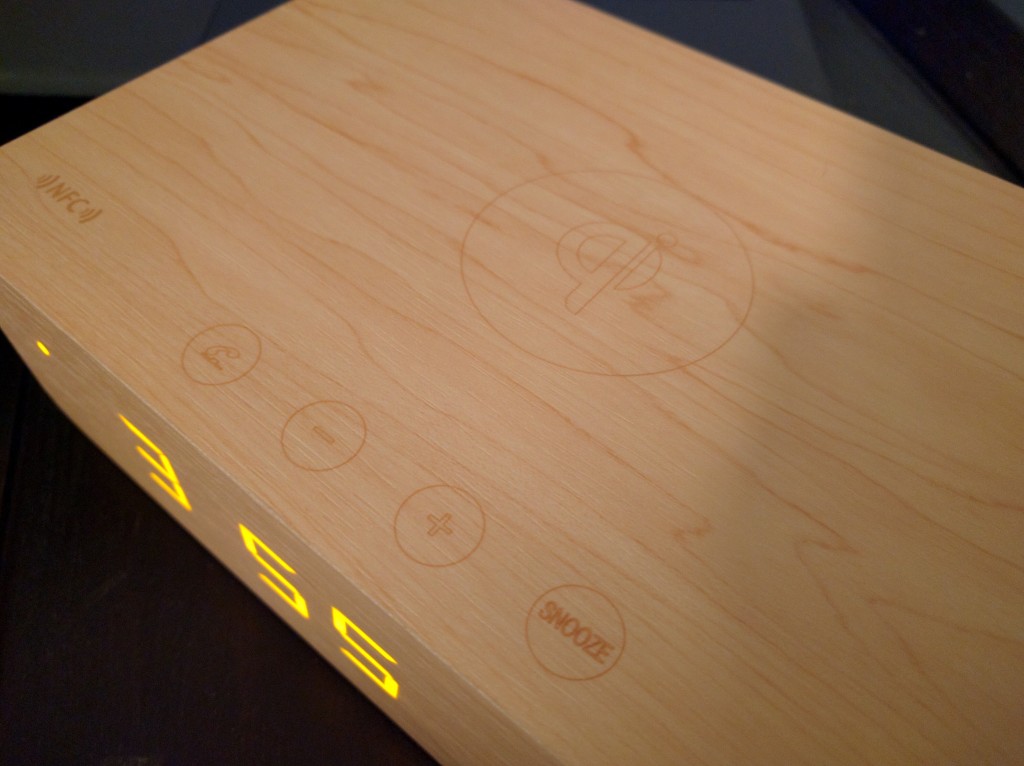 In the center of the clock is a Qi enabled wireless charger, which is compatible with devices like the Samsung Galaxy S6, S6 edge, Note5, LG G4, Nexus 4, Nexus 5, Nexus 6 and more.

Overall the design of the Olixar Qi-Tone alarm clock is beautiful in its minimalist design.

I’m very hesitant to add gadgets to my bedroom as I have a difficult time sleeping. I don’t keep a television in my bedroom and have blackout shades over my windows. Blue and green lights really mess with my sleep. There have been multiple studies confirming that those two wavelengths actually disturb Circadian sleep cycles and should be avoided if sleep is an issue for you. Conversely, orange light can actually help you sleep. Now, I cannot state if the orange light actually helped me sleep, but I can say with absolute certainty that it did not interfere with my Circadian sleep cycle. Even with the clock pointed at my face, I still slept as much as I normally do, 4-5 hours per night.

Sliding my Samsung Galaxy Note5 onto the Qi charger really makes me miss having wireless charging on my Nexus 6P. It is so easy to reach over and grab my Note5 off the top of the clock and simply return it back to charge. It beats leaning over and trying to find a little charging cable in the middle of the night. It charges at normal wireless speeds, which is slower than Qualcomm’s Quick Charge. When you’re charging overnight, speed isn’t really much of a concern. 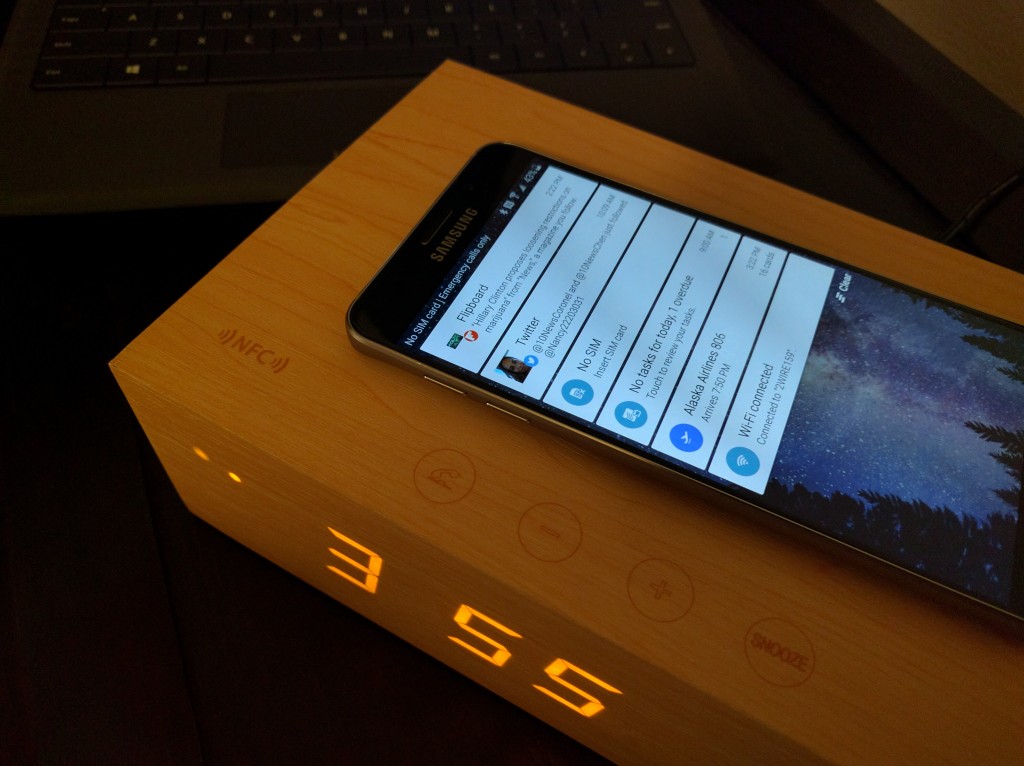 When I wake up, in the morning, I usually stream music to a Bluetooth speaker. This is sometimes a hassle because my speaker may be in another room and I need to track it down. Having the Olixar Qi Bluetooth alarm clock always connected to my Note5 solved this minor issue. It has full bodied sound, but don’t expect super deep bass with this setup. It gets very loud, loud enough to where it will annoy my neighbors. Music is fun to listen to from this clock.

I did try taking a phone call with my mom and she had a minor issue when I would talk to her. She said she could hear an echo which I attribute to the clock being in a corner of the room and having the sound reverberate back onto itself. If you don’t have the clock in a corner this shouldn’t be an issue.

It’s actually nice to have a thermostat next to me while I’m in bed. Yeah, San Diego’s weather doesn’t change much. But that actually makes San Diegans more sensitive to slight weather changes and when my room is 67 degrees vs 75 degrees, I definitely will make note of it. Yeah us San Diegans are pretty spineless when it comes to weather, but hey, you get used to the environment you’re in. When my room is 67 degrees I know it is really cold outside and I need to throw on a sweatshirt. (LOL at me if you want) 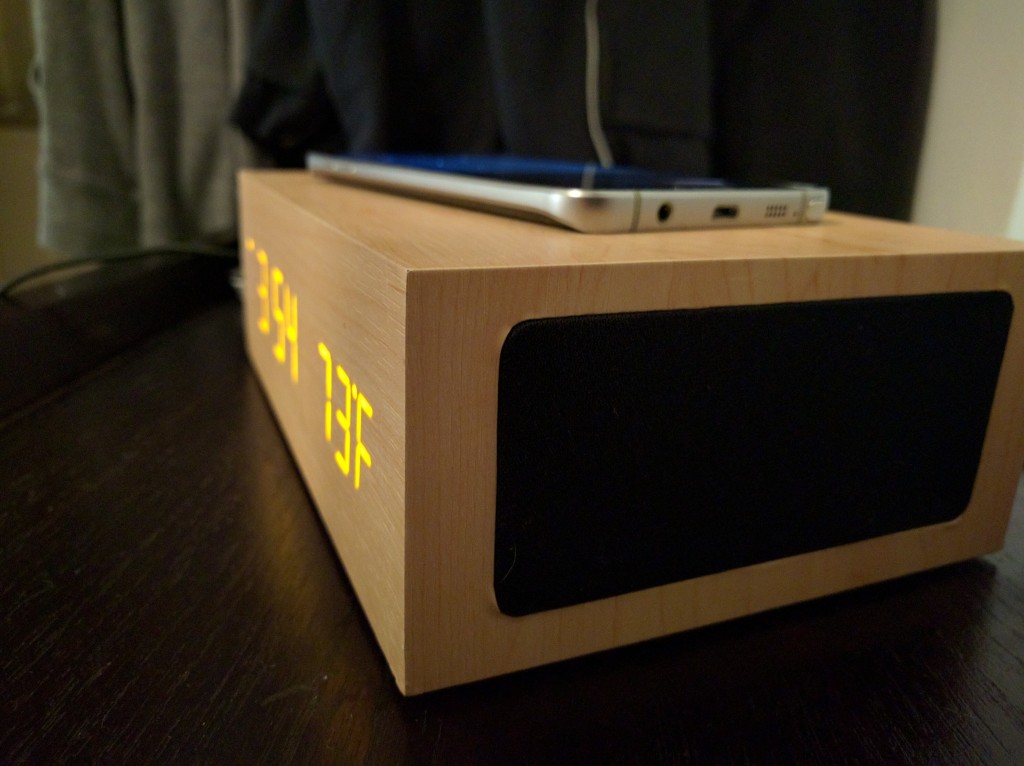 The Olixar Qi-Tone alarm clock is really one of those devices that will help minimize your gadgets. There really is no need for so many individual devices like chargers and speakers to clutter your nightstand with an all-in-one device like the Olixar Qi-Tone alarm clock. It also looks fantastic too. If you want to learn more or make a purchase head on over to Gearzap.com. They sell a wide range of other accessories you might find of interest as well. They even have every accessory known to man for Samsung tablets(click here). 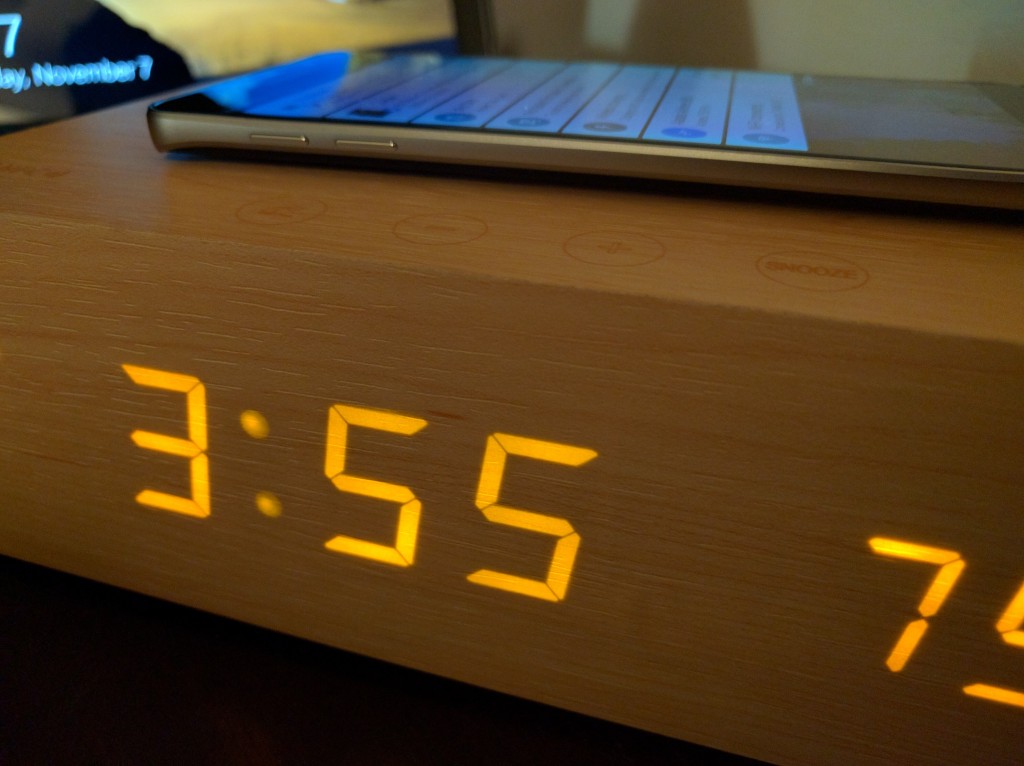