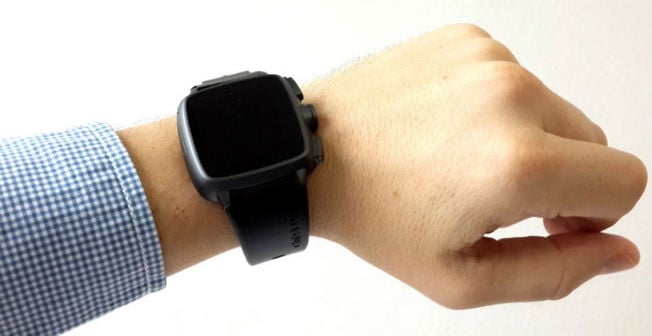 The marketplace for smartwatches is a young one, filled with potential and ready to explode any year now. We have only a handful of competitors right now, ranging from what some people call the original smartwatch, Pebble, all the way to the ultra-premium Moto 360.

But somewhere in the middle of that we have the new Omate Truesmart smartwatch, a device funded on Kickstarter and only available for pre-order. The device is being advertised as a Smartwatch 2.0, and they say there’s a dozen reasons why. But whether or not these features mean it’s a device you should buy is a matter of discussion. Let’s dive into what makes the Omate Truesmart… truly smart.

Standalone or companion smartwatch… you choose.

One of the unique things about Omate is the fact that you can put your micro-SIM card into and have it act as a standalone smartphone. As long as your SIM card isn’t locked to your current smartphone, you can simply take out your SIM card and pop it into the Omate to receive data on its own and make calls and texts. This feature alone can make the Omate a very powerful option when compared to the competition of smartwatches that only act as companions to your smartphone.

But while Omate is proud of its standalone capabilities, I can’t see many people using it by itself at all. When I think of a person today that has a smartwatch, I think of them as reasonably tech savy and quite interested in gadgets, which would lead me to believe that would have a smartphone in their possession. Not many people would buy a smartwatch without having a smartphone. That’s a problem with the Omate is that there was too much focus on this being standalone smartwatch and not enough focus making this a companion watch. By this, I mean the companion abilities are pretty bad.

Abilities currently supported are notification mirroring, accepting or rejecting calls, and seeing when you get a text message (not actually seeing the text message or being able to reply to it). It really makes the whole smartwatch experience seem pointless when I can’t actually see the text message on the watch and I have to pull out my phone to do so. Pebble does this pretty well, and I don’t see why Omate can’t.

After extensive use with Omate, I prefer it to act as a standalone smartwatch but doing so can really strain your eyes after squinting almost every time at the less than average screen…

The screen is okay. After using the original Galaxy Gear for a little bit and hearing about the upcoming Android Wear smartwatches with OLED displays, it’s safe to say this screen isn’t the best on the market. If I hold the watch away from a distance, the 1.54 inch 240×240 IPS display looks pretty decent with average color display, but when looking closely, and trust me you will, you’ll absolutely notice the pixels, which makes web browsing and photo viewing less than pleasant.

Omate comes equipped with a 600 mAh battery, capable of 100 hours of standby time. I was able to get a full day use out of it starting at 8:30 am and ended up with 18% by the end of the day at 11 pm. I wasn’t using Omate as heavily as I would a smartphone, but I had my SIM card in it so I tried a couple phone calls, sent text messages and downloaded some things from the OStore, which is Omate’s app store, and played a bit of Flappy Bird (Oh yeah, you can live the experience all over again). I did a little bit of web browsing using mobile data which was the big drainer, but on a normal day I wouldn’t use Omate as heavily, so I was happy with the battery life.

This is where my biggest complaints are about the Omate Truesmart. As Omate was being developed, the best OS available for a smartwatch was Android. Omate is powered by Android 4.2.2, and probably won’t be seeing a newer version, at least anytime soon. Omate has a custom skin and launcher on top of Android which serves to bring better Android functionality to a small screen on the wrist. While having the full power on Android makes this device incredibly customizable, many things just seemed to small and hard to see. The Android Messaging app that came pre-loaded was very hard to use and even the flexible Kleksy keyboard was just too small for enjoyable typing. 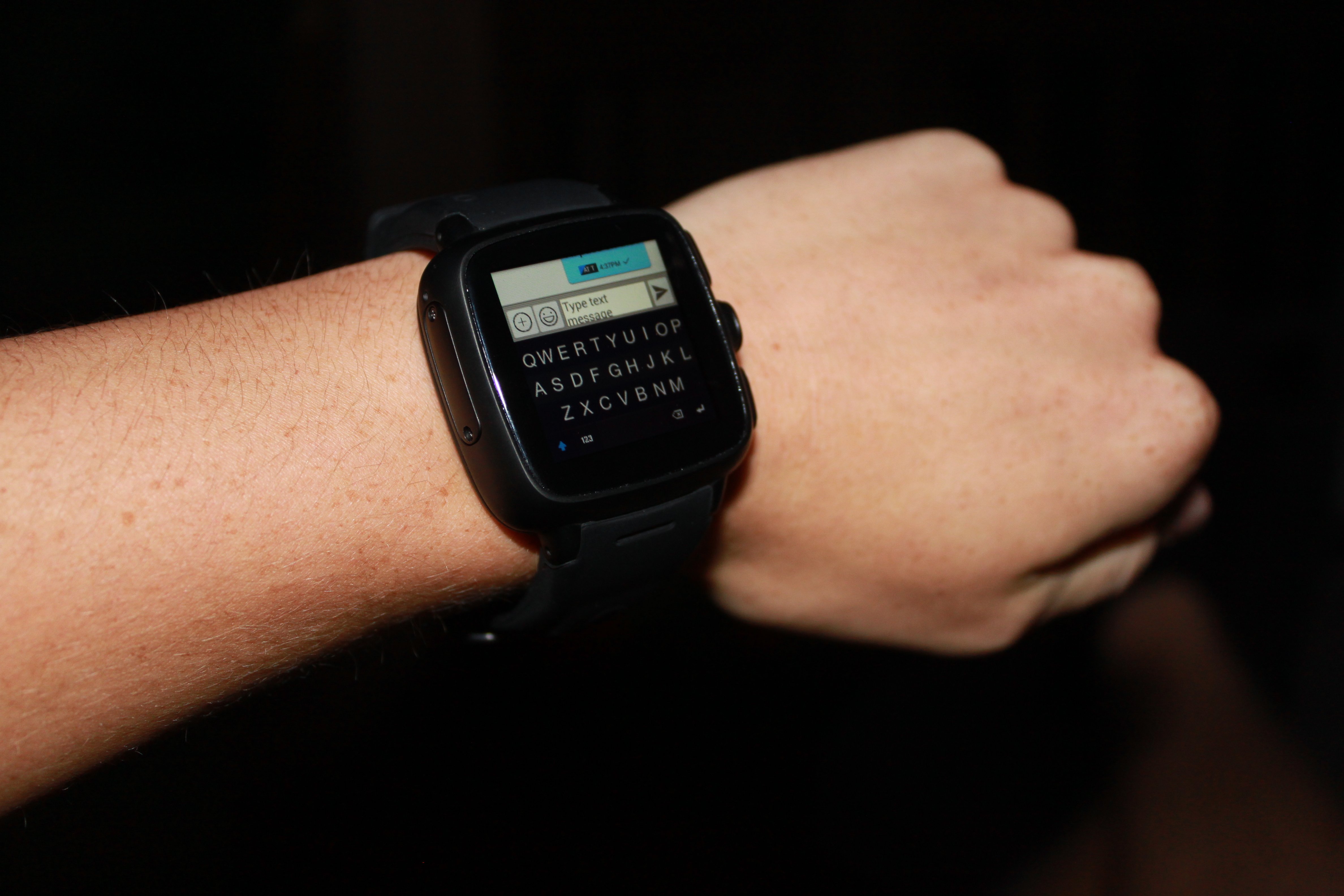 I’m going to be a while on this text..

Android 4.2.2 runs really smooth on Omate, and your options to do things are limitless. Just imagine all the things you can do on your Android powered smartphone, just smaller. Much smaller. You can download and install apk’s from the internet, you can choose which launcher you want to use for the home screen, you can send tweets, check out Google+, and pretty much anything, and with 1GB of RAM on this thing, you can easily switch between these apps with Android’s default multitasking. Pretty cool. But some apps truly seem incompatible for smaller screen, like Dropbox for example. I opened it, it gave me a handful of welcome screens showing me what to do, but then I couldn’t move on from there. It was as if the continue button was below the screen margins and I just couldn’t see it..

While this device is clearly geared towards power users and people who want their smartwatch to do everything, I still believe smartwatches with Android Wear are the better option. On Omate, you are sacrificing the user friendliness and accessibility of Wear’s Google Now cards for customization and lots of features you probably won’t use.

Omate comes equipped with a 5MP camera on the side capable of shooting 720p video. I’m guessing this won’t be your primary shooter, but with 5MP, it can be a really solid emergency camera and is compatible with Instagram, Snapchat and other photo apps. 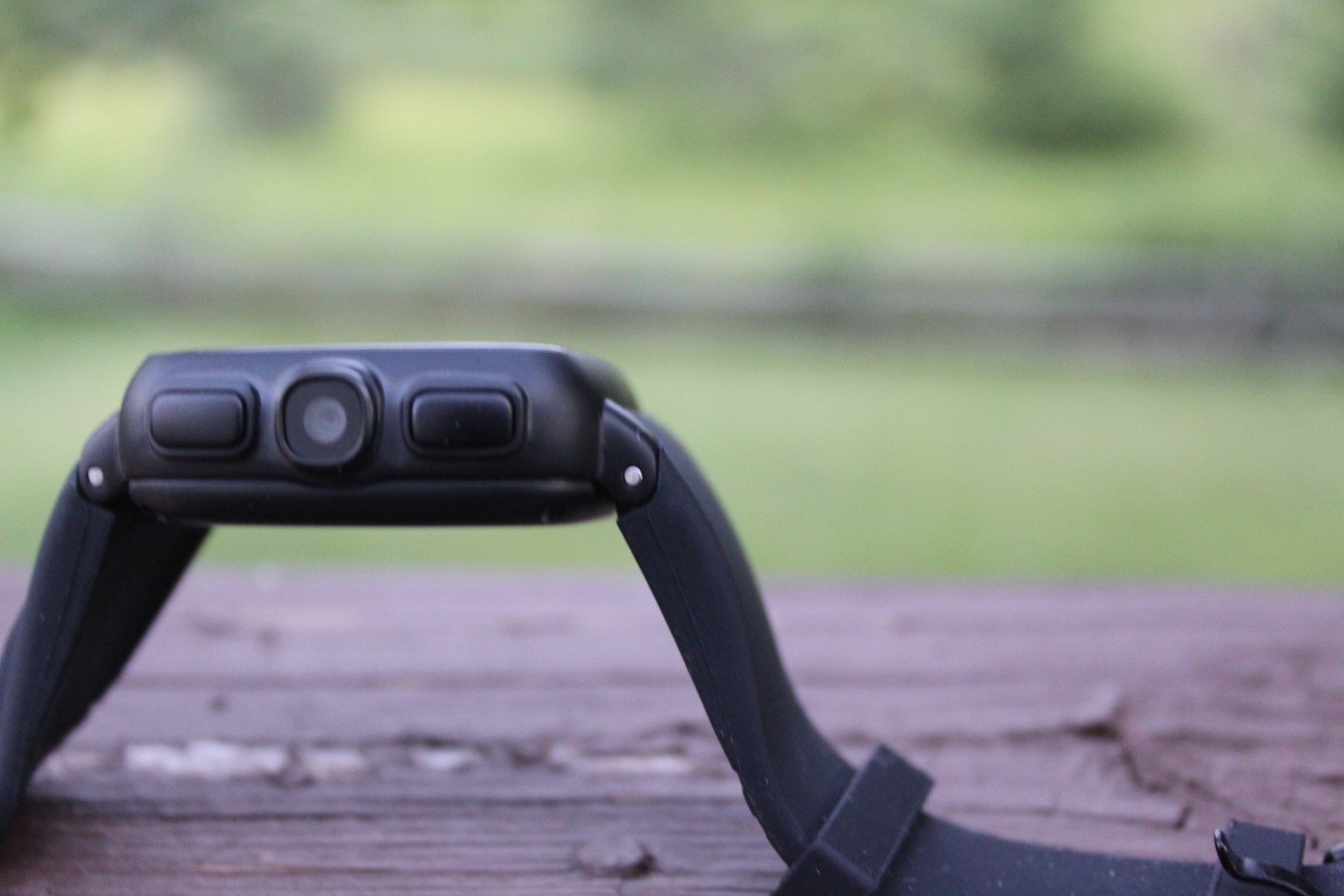 On AT&T’s HSPA+ network, speeds were fair and browsing was almost as fast as my Nexus 4 (3G also), and the GPS worked great when trying to figure out how far you’ve ran.

WiFi signals were pretty bad and downloading from the OStore took pretty long. The interesting part is that downloading speed up quite a bit when I took the watch off my wrist, meaning that wearing the device blocks some of the WiFi signals.

My immediate though when trying the watch on was how bulky it was. People tend to wear watches for fashion statements and because they look nice. With Omate, some people thought I was under house arrest because of the bulky device on my arm. I’m a fan of how the Galaxy Gear and Gear Live look, with their metallic finishes and very modern designs.

Omate was obviously designed for power and lots of features, so to cram 1GB of Ram, 8GB of storage, an HD camera, micro SD slot, powerful dual-core processor as well as antennas for GPS radios inside of a Kickstarter project is no easy task, but the end design is just a bit too bulky for my tastes.

Other than the size, the durability is top notch, with it being water resistant and a very strong feel to it.

Omate Truesmart is a device for a certain crowd. If you want to smartwatch that can do almost anything, has the full power of Android with all the apps compatible for it, then this might be the smartwatch for you. But my main complaint is that Omate has lost sight of what a watch is suppose to be. With Pebble, I can simple twist my wrist towards me and the screen lights up to show me the time. With Omate, the screen is off until I press a button on the side for it to light up and show me the time.

If you want all the capabilities your phone has and want to use a smartwatch as a phone, then this is a match made in heaven for you. But if you are a customer that wants important information at a glance at the right time, then I would check out Android Wear smartwatches. Check out the specs for yourself below and Omate’s Kickstarter page here