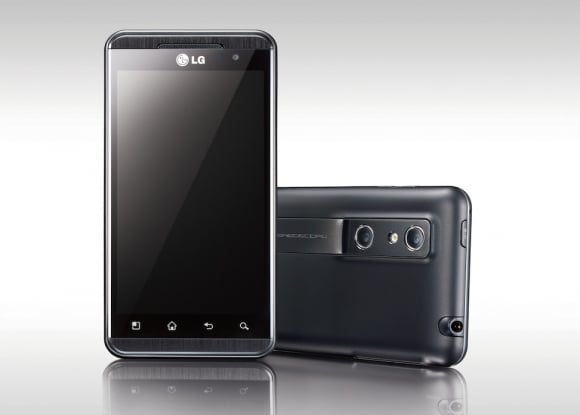 Although most people question LG’s capabilities, you’ve got to admit that they’re often the first with new technologies. They were the first to actually release a dual-core phone, and they were the first to release a phone with 3D capabilities. But is it better to wait and see what the competition brings or does being an early adopter pay off? Well, that’s what we’re going to find out in this review. Although the 3D thing is nifty, it’s just another selling point, so I won’t solely focus on that. Read my full review below.

You can criticize LG for a lot of things, but you’ll have to admit that they manage to deliver an excellent first impression with the box and build quality. It comes in a gorgeous and solid red box, which showcases its features in a nutshell. Once you open it up you’ll face a beautiful phone laying inside, waiting to be touched for the very first time. Inside the box there’s the standard collection of accessories, i.e., headphones (which are of excellent quality by the way), the usb cable and a wall plug to charge your device. Nothing to be excited about at this point. I wish manufacturers would include HDMI cables with their phones, but unfortunately they do not. Now let’s move on to the phone itself. I know there is a lot of discussion about plastic vs. metal and I’ve got to admit I personally prefer plastic.

Do I hear you asking why? Well, let’s say you drop two phones from two feet high. The first one is plastic, which absorbs the shock a bit which makes sure that the screen doesn’t shatter to pieces. The second one is a metal unibody construction, which looks solid but actually doesn’t absorb the shock one bit and the glass gets pounded hard, therefore shattering to pieces. That’s why I prefer plastic. Metal looks cool, but it is actually far less solid than plastic in such a tiny device. Sure, it doesn’t scratch but I’ll take a few scratches over a shattered screen any day. That makes me come to the conclusion that the Optimus 3D is a very solid piece of hardware, with a screen that is easy to swipe on (it’s less ‘rigid’ than other phones) and a back that doesn’t wobble or do anything it shouldn’t. One thing I’m less pleased about though is the thickness. I’m used to the Galaxy S II, compared to which the Optimus 3D is just plain fat. If you compare it to other phones, you’ll see that it isn’t particularly slim, but it’s not horrible either.

LG may have a lot of scoops with new technology and make solid pieces of hardware but they seem to spend less time on perfecting their software. If you think Touchwiz 4 is cartoony, don’t even think about using any of LG’s phones. I don’t mean to be biased or anything, but I just can’t stand their software. It’s too bright, to cartoony and it’s just ugly.

Apart from the aesthetic issues, it’s not too fast either. LG makes advertisements about the incredible speed the Optimus 3D should offer, but this €500 phone just can’t afford itself to score a bare 36MFLOPS in Linpack and has hiccups all the time. I’ll get to the other benchmarks later. And yes, this score is really a software issue, the SoC is way to powerful to perform this low. LG should be sued for promoting their phones with such lies. Don’t get me wrong, I don’t hate the Optimus 3D, it’s a nice phone to use but it doesn’t match the information in the ads.
On top of that, the Optimus 3D still runs Froyo, which is quite unacceptable for a freshly released phone. Perhaps this partly explains the low performance since Gingerbread brought a lot of speed improvements and dual-core optimizations. I’ll say one more thing about the performance before I move on to other subjects. There is a small but omnipresent lag in everything you open, be it opening an app, be it an item in your Settings app, it’s always there. It’s something that shouldn’t be there on a dual-core phone.

If you don’t look at the performance or the color scheme, the software on the Optimus 3D is actually quite good. The launcher is easy to use, it’s snappy and it offers you a lot of options, including categories. LG customized the status bar too. They added a permanent notification for the stock music player – even when you never even used it – and there’s the standard set of quick controls on top: Sound, WiFi, Bluetooth, GPS and a data toggle. The browser is not as fast as it should be or could have been, but at least it features an easy to use UI, including visual tabs and a homepage made up of your most visited webpages, much like Touchwiz for Honeycomb and Google Chrome do. Then there’s the following bloatware:

It could be worse, most of the bloatware apps are handy. At least LG’s not including Bing with its software *cough* Verizon *cough*.

The part you’ve all been waiting for. LG may have been the first to release a 3D phone, but does it deliver? Is the 3D feature really worth overlooking its shortcomings? There’s a simple answer to that question. If you’re a geek like me who wants all the new gimmicks in his phone, then yes, it is absolutely worth purchasing. If you’re an average Joe, then no, it’s not. The 3D thing is well implemented and it looks cool, but it isn’t mature yet. For example, you’ve got to hold your device perfectly still in the perfect spot for the 3D to show its awesomeness. When you’ve found the sweet spot though, you’ll be amazed about how cool it is.

This is not my first time handling the Optimus 3D – I saw the early prototypes – so I’m used to glasses-free 3D, but people handling the Optimus 3D for the first time are absolutely stunned by the glasses-free 3D display and just about faint when you show them a 3D picture of themselves. LG implemented a few 3D functions: Youtube 3D, a couple of 3D games and of course a 3D camera. The 3D pictures do just fine. They’re taken at a bare resolution of 3MP, but you won’t even notice – you’ll probably be way to busy checking out all the 3D elements. The videos are of a lesser quality though. They’re watchable, but don’t move your phone too fast while filming, it will create a blur. The 2D pictures are taken at a resolution of five megapixels, which is lower than the cameras found in the new high-end phones, but will do just fine.

LG brings you two games in 3D, N.O.V.A. 3D and Asphalt 6 3D. You’ll probably get headaches when playing them for a long continuous time, but for a 30 minute gaming session, the 3D aspect really adds something in my opinion. Of course it isn’t perfect, but as I mentioned before, the 3D aspect makes them even cooler to play. Last but not least, there’s Youtube 3D. As you could have guessed, this is a special Youtube section for 3D movies. There’s a few hundred movies, mostly less than a minute, and all kinds of stuff — like flying butterflies, but it’s just not enough 3D content for my liking. It’s not strange, 3D is a relatively new tech in mobile, but it’s pretty annoying at times. To make a long story short, 3D is in a buggy stage but is still pretty awesome to watch.

I was amazed by the battery life of the Optimus 3D, it easily lasted a day (about 8-10 hours) with medium to heavy use — if I didn’t turn on any 3D things. It’s understandable, but it still sucks that 3D drains your battery that heavy. I suggest only turning on the 3D if you really need it to show off… or something like that.

Note: I define heavy use as having 3G and sync always turned on, a lot of browsing, mailing, twittering, your basic smartphone purposes and I’m positively surprised by the battery life.

The Optimus 3D is a nice phone to use. It has its drawbacks and advantages, but is it worth buying apart from the cool and well implemented 3D feature? Well, that’s a complicated question. If you don’t demand much from your phone, you should buy it. If you expect a Galaxy S II-like performance, don’t go with the Optimus 3D. If a smooth phone with 3D is what you’re looking for, I suggest you go with the Evo 3D.