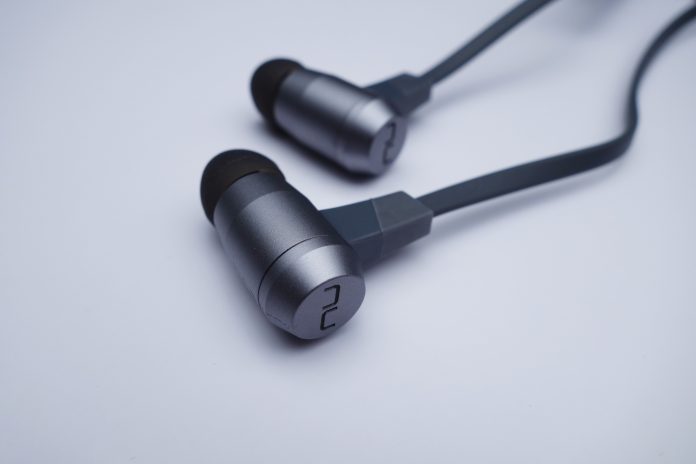 It’s no doubt that Bluetooth wireless headphones are the hotness in audio gear today. Many of our favorite headphone manufacturers now have a Bluetooth device somewhere in their lineup. Optoma is one of the newer guys to join the fray.

This week, the company has just launched the NuForce BE6i in-ears. Folks who are into the audio scene may have seen the NuForce earphone brand before, which can reach audiophile-grade, HiFi levels (and pricing). However, the BE6i looks to compete with today’s popular wireless in-ears, like from Jaybird and Plantronics, with a strong package and cool retail price of $129. Let’s check it out.

From the bat, you can tell that Optoma means business. Most of the wireless in-ears you see today have a somewhat cheap-feeling plastic build. The BE6i earpieces are completely Aluminum.

Their cylindrical shape is nothing special, and it’s a little too reminiscent to Jaybird’s X models, so thankfully the BE6i have the metal to help them stand out. There’s slight tapers on the front and back of the chassis that also help the basic design. And at the back end, the “Nu” branding is etched into the metal.

A small mention is that the caps of the earpieces are magnetically attracted. It’s not a big deal, but nice to see them cleanly clasp when not in use.

The cord is also not unlike that I’ve seen from the competition. It’s a flat, rubbery cable (meant to route behind the neck), with an in-line 3-button remote/mic. The remote succumbs to cheap plastic, but I like that it’s exactly the same color as the cable, so that fact doesn’t distract that much.

This is also from where you charge the BE6i. The microUSB charging port is under a flap on the side of the remote. A small LED light indicates when it’s charging and when it’s fully charged.

Optoma was quite considerate with the BE6i’s packaging. You’ll see a robust zipper case when you open the box. Within it are a total of six silicone ear tip pairs (three shorter and three longer), two pairs of Comply tips, silicone ear fins (help secure the fit in your ear), a cable clip (to tidy the cable slack), and a microUSB-to-USB charging cable.

It’s easy to get started. Simply hold down the middle button on the remote for a couple seconds and the BE6i powers up in discover mode. Simply find it in your mobile device’s Bluetooth settings and voila.

The fit is decent. Some folks may be concerned about the metal’s weight, but only the earpieces are metal (and light metal, at that). The rest of the unit is very lightweight. Bear in mind that the earpieces are a tad on the large side, but not unlike its competition.

Granted, they stay in the ear well. However, I’m not a big fan of the silicone tips. I tried multiple ones and can’t get a tight seal. So I’m glad that Optoma includes foam tips.

It’s important to know that although the BE6i have a premium aesthetic, that doesn’t mean they compromise on durability. Just like the other guys, they have sweat and water resistance (IPX5 rating). The Bluetooth range is also not hindered by the metal design. It is rated at a whopping 100 feet. Battery is decent too, at up to 8 hours.

Of course, nothing I’ve discussed so far matters unless the earphones sound good. Does Optoma manage to carry over its expertise into the Bluetooth arena? I think so. The quality definitely justifies the price tag, which says a lot, because the BE6i incorporates a lot of other technology.

The sound’s biggest strengths are the bass and treble. Fortunately, that doesn’t mean that the sound signature is V-shaped (forward bass/treble but recessed mid-range). The mids do have a good presence, albeit, the quality doesn’t quite match to the rest of the spectrum. They’re a little hollow, or flat, to my ears.

I would give the cake to highs. They’re satisfyingly detailed; instruments like cymbals and percussions have a fullness/richness (but not piercing or exaggerated). Bass is decent as a whole. The delivery is solid, with a nice kick from the mid-bass, but the depth and energy from the lower-end could be better.

The width of the soundstage is above average, but nothing to write home about. I would’ve liked it to be more 3D than 2D (there’s more width than height or depth). All in all, decent sound quality, but nothing that will blow you away.

I think that Optoma did a good job, but unsure if it’s enough to stand out in what’s now becoming a crowded market. I would definitely recommend the BE6i, though. It’s solidly built, functions well, sounds good, and is competitively priced, at $129. My only gripe is the silicone tips; they don’t have the best fit in my ears.