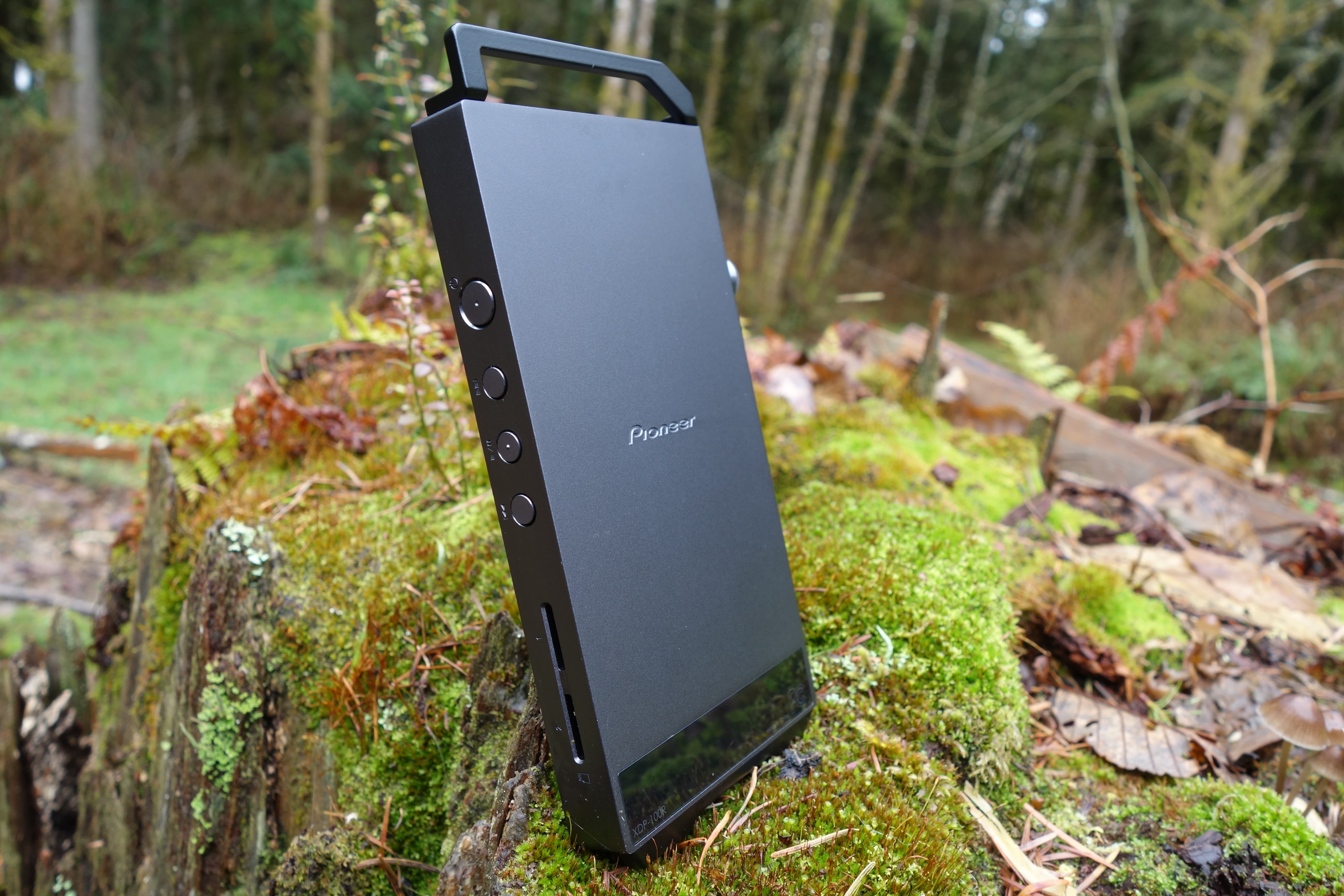 You know, I found myself at a crossroads. I wanted better audio on the go, but wasn’t sure the best way to get there. Smartphones aren’t traditionally the best audio sources. Just like how dedicated cameras are better than the tiny cameras on smartphones, audio processing can be done much better.

There’s two routes we can take: 1) Buy an external digital-to-analog converter (DAC) and feed it the digital signal from the smartphone or 2) Just sidestep the idea of the smartphone as the source and buy a stand-alone digital audio player (DAP).

I’ve honestly only ever considered the former, because I want my smartphone to be able to do everything. But because I listen to music on the go quite a bit, I was curious if a DAP is just the best way to go. You don’t have tether two devices together like you do a phone and external DAC. A DAP is a mobile computing device with a great DAC built-in.

That said, I still want an audio player that runs Android. I stream HiFi music from TIDAL. Unfortunately, most DAPs use proprietary software (which means no TIDAL support). But Android DAPs are out there, and I have a promising one to show you guys today – the Pioneer XDP-100R. 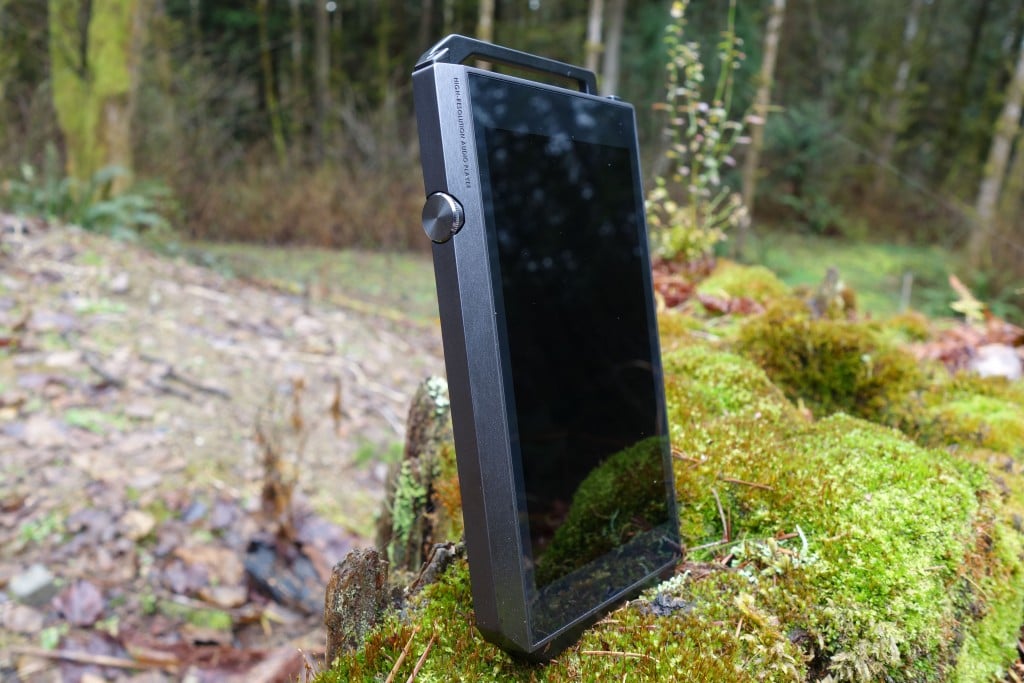 Pioneer’s A/V division is lead by Onkyo, a renowned manufacturer in the audio scene. They’ve shrunk down their audio components and molded it into a portable package, which runs Android! Let’s find out if this was a good move. 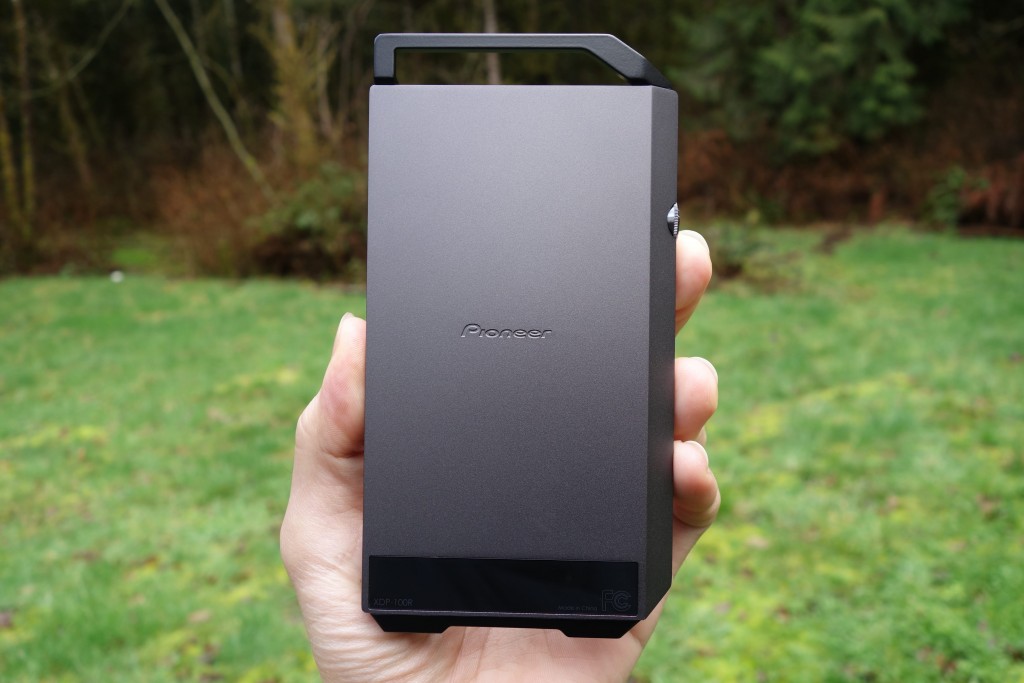 The XDP-100R has a really cool exterior. The shape is asymmetrical, which is not something we’re used to seeing. I dig it. It’s flat on one side, but on the other, the edge angles and tapers down.

Build-wise, it’s a block of metal. There’s a smooth, nice-feeling finish that screams premium. The XDP-100R is relatively thick (0.5″) compared to today’s thin-obsessed smartphones, but it’s not a big deal ergonomically (maybe if you wear skinny jeans).

The front is dominated by glass, except for the bit of chassis on the left side. The surface of that edge has a subtly different, eye-pleasing brushed-metal finish. Towards the top, you have a volume knob and small etching that reads “High-Resolution Audio Player”. 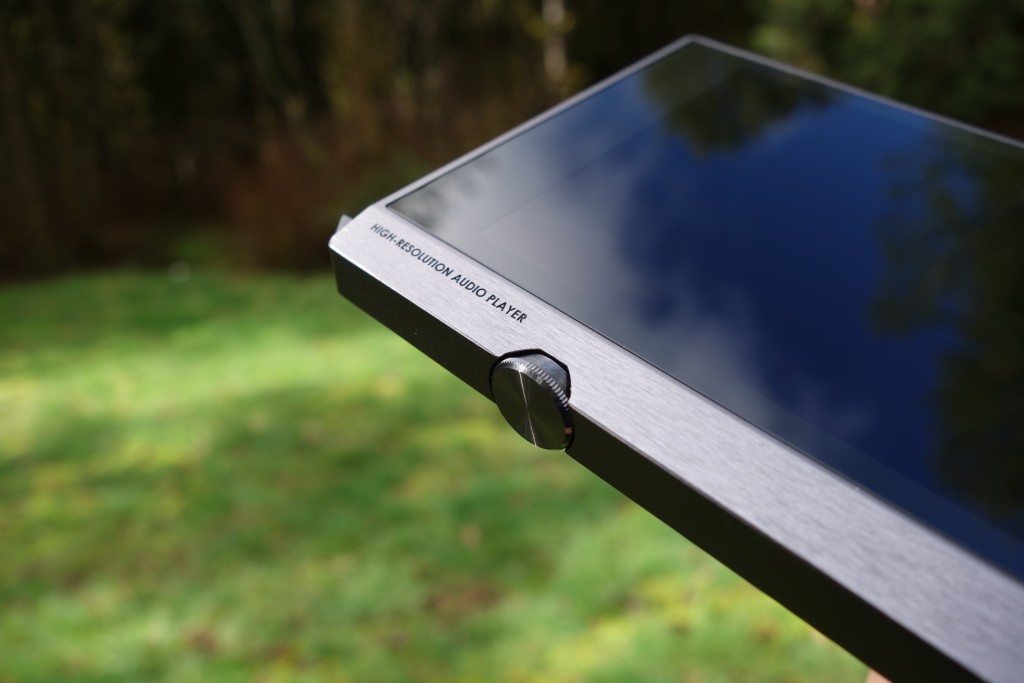 There’s quite a bit happening on the other side. From the top down, we have buttons for the power, next track, play/pause, and previous track. Then you’ll see not one, but two microSD slots. Each slot supports up to a 200GB card (for 400GB total). That’s pretty generous and thoughtful, considering that HiFi files take up a lot of space. 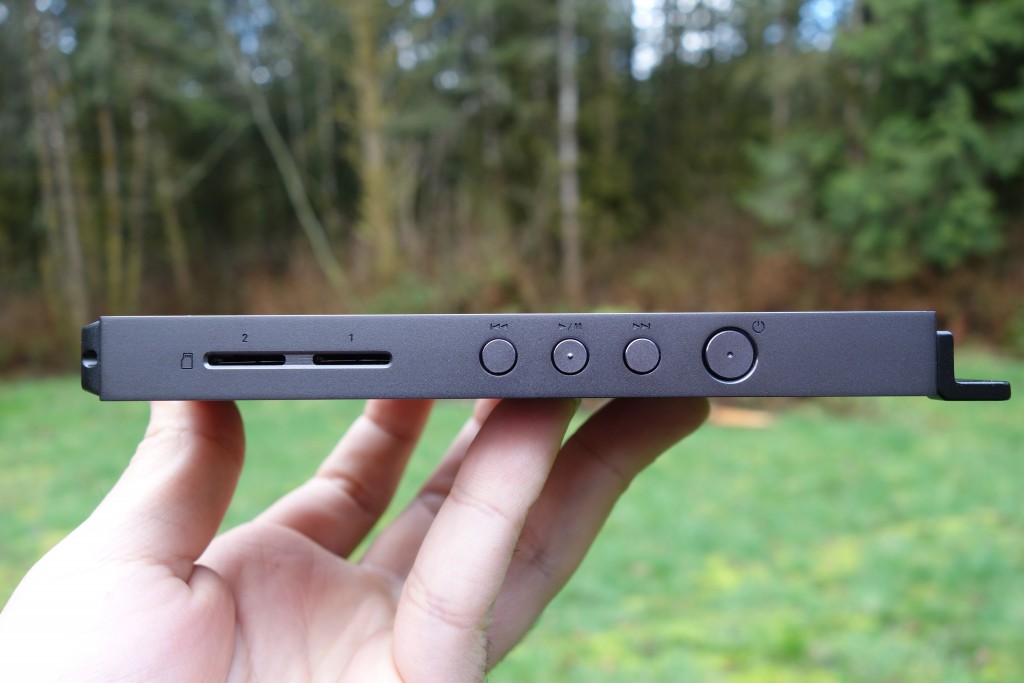 You’ve probably noticed the plastic bumpers attached to the top and bottom of the chassis. Pioneer put them there for protection. Thankfully, you’re not forced to live with them if you don’t want to (the top one is rather large). You just need a thin screwdriver to remove them. 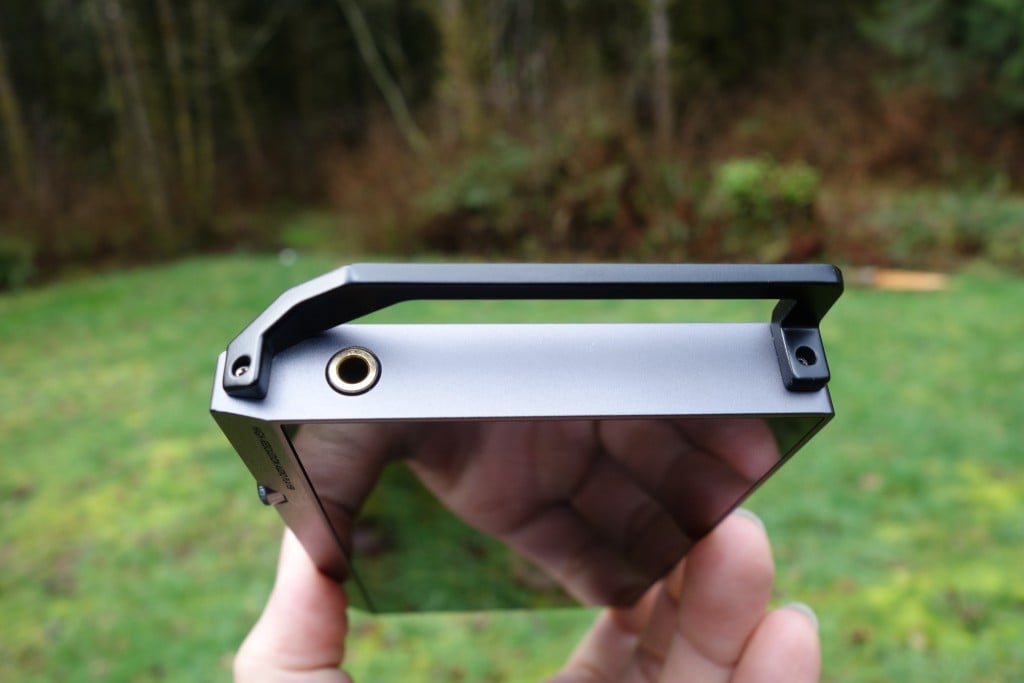 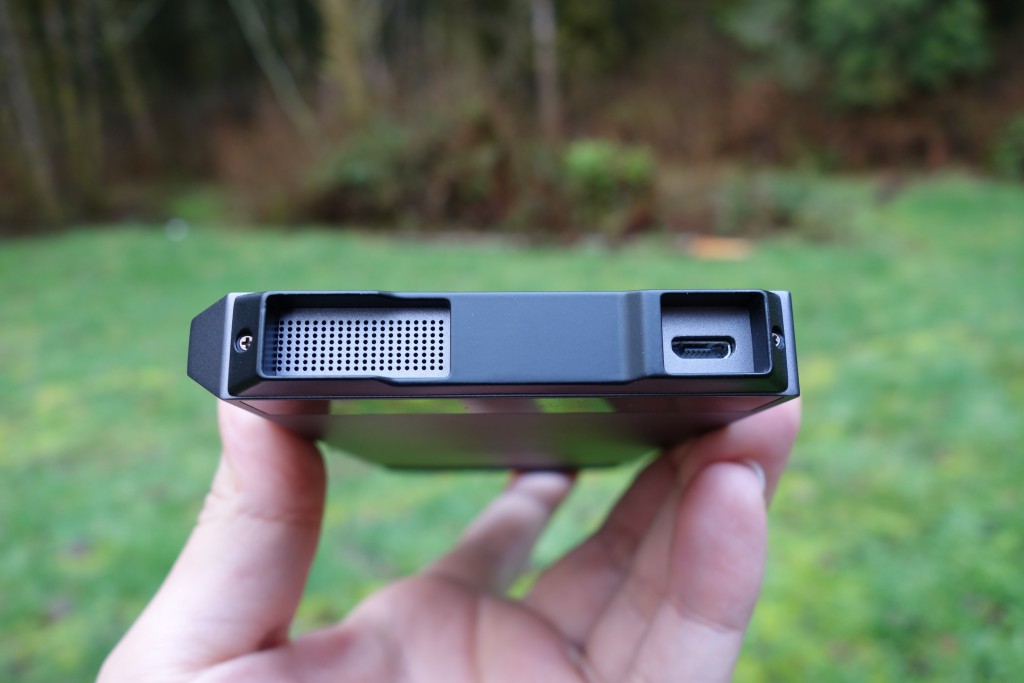 The ports are a standard affair. You’ll find the 3.5mm headphone jack on the top and microUSB charging/data port on the bottom, along side an external speaker. The XDP-100R does not have a camera.

Let’s jump right into the specs of the XDP-100R:

Yes, the core specs do look yesteryear, but remember that the priority of a DAP is audio quality. The horsepower is plenty for just navigating through Android. I’ve had no problems with performance. Navigation is fluid and snappy. 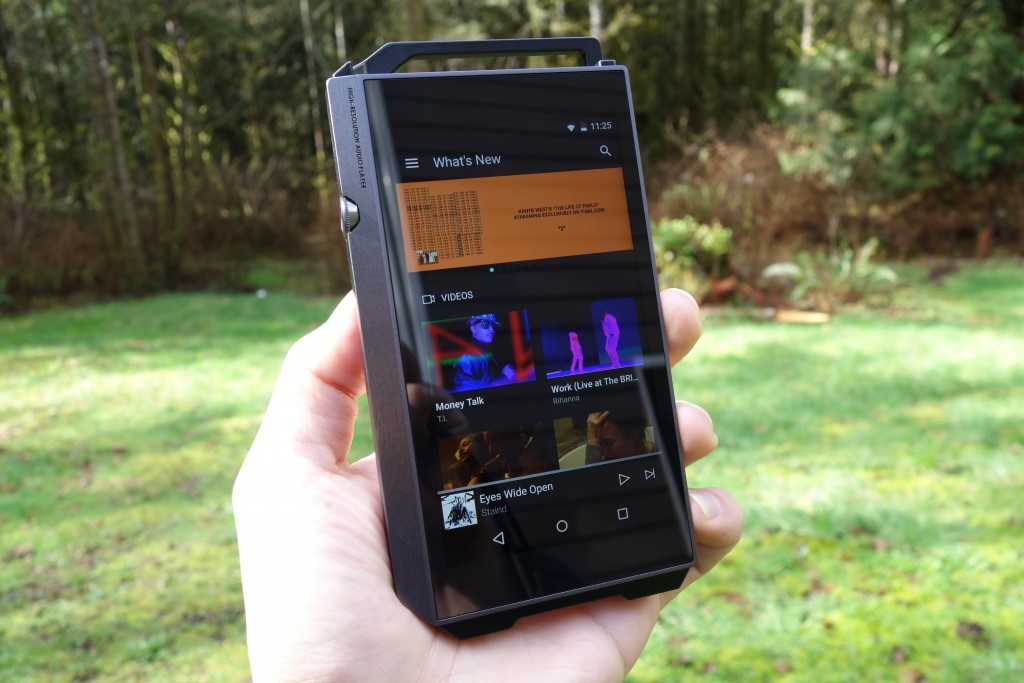 From that perspective, I wasn’t expecting much from the display. But I was pleasantly surprised. Color are vibrant and the panel can get considerably bright. Viewing angles are the only con, where quality noticeably degrades (but still usable).

Pioneer rates the 1,630mAh battery for 16 hours of music playback. However, it’s not said if that’s achieved with all the radios turned off. Nonetheless, I observed some pretty decent battery life in my use. I stream HiFi music from TIDAL, so WiFi was used throughout my testing. With on and off use, I got about a day before the system pinged me to enable Power Saver mode. 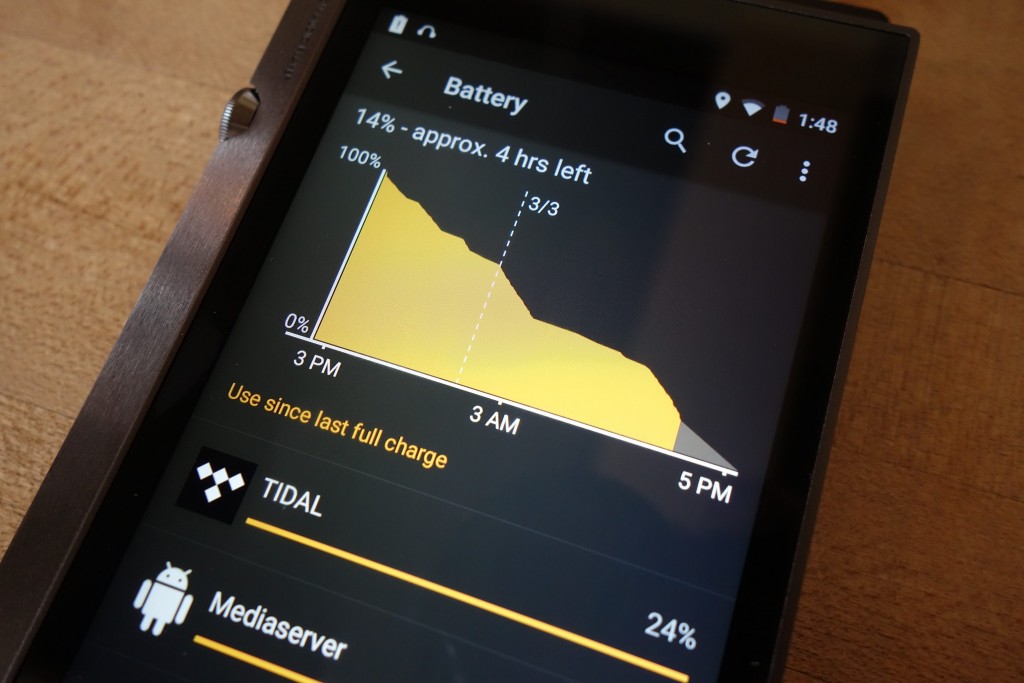 On the battery usage graph, you can tell when I listened or not (based on the steepness of the slopes). Running HiFi streaming off of WiFi caused a reasonable battery drain, and on idle, the system laid low.

Android 5.1.1 Lollipop is running the show, so you will get some Material Design goodness. Pioneer does have its own little touches, but the experience is mostly stock Android.

However, which version of stock Android you’re looking at is another thing. The interface strangely looks like a mishmash between Lollipop and KitKat. 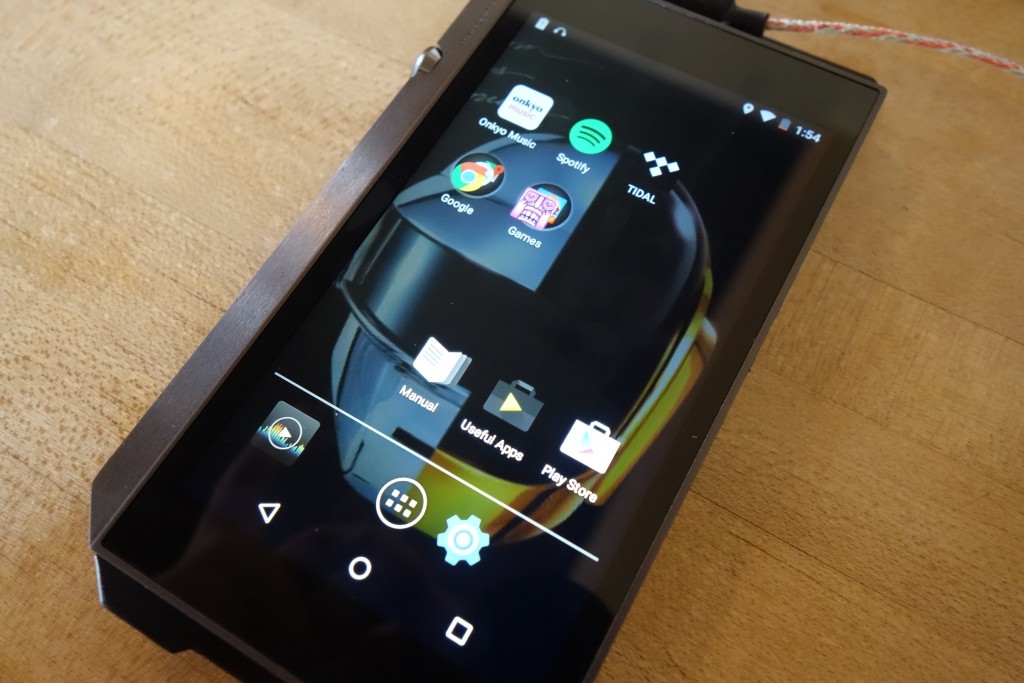 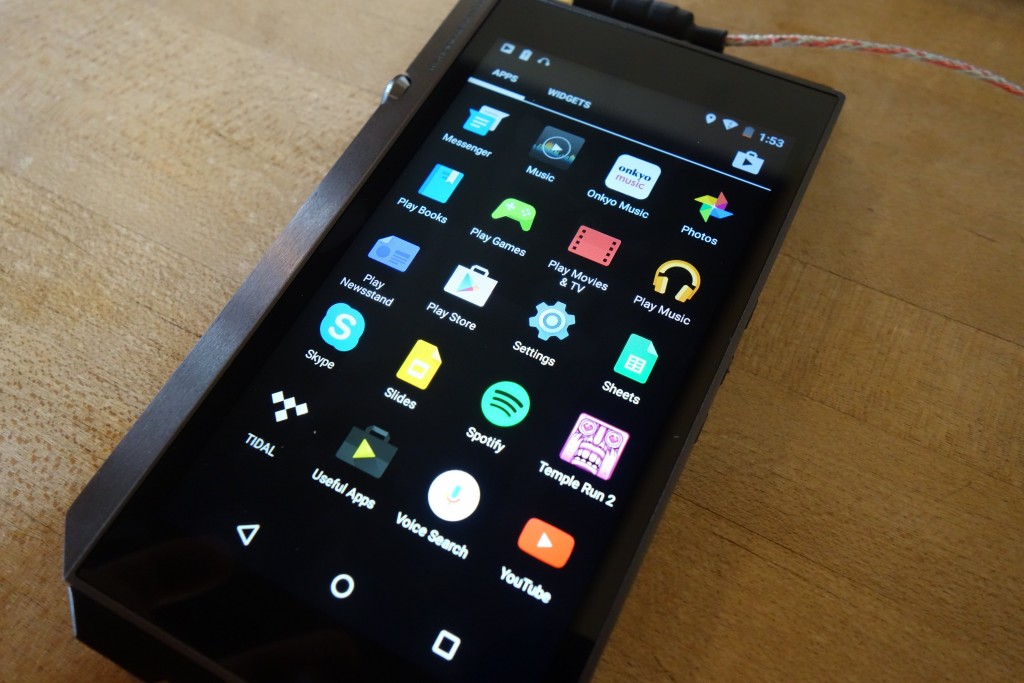 My only guess for this is that the development of the custom software add-ons is a step behind. Hopefully Pioneer can bring it up to speed sooner than later. The true nature of Lollipop does rear its head through sometimes, such as with the navigation buttons and notification pull-down. 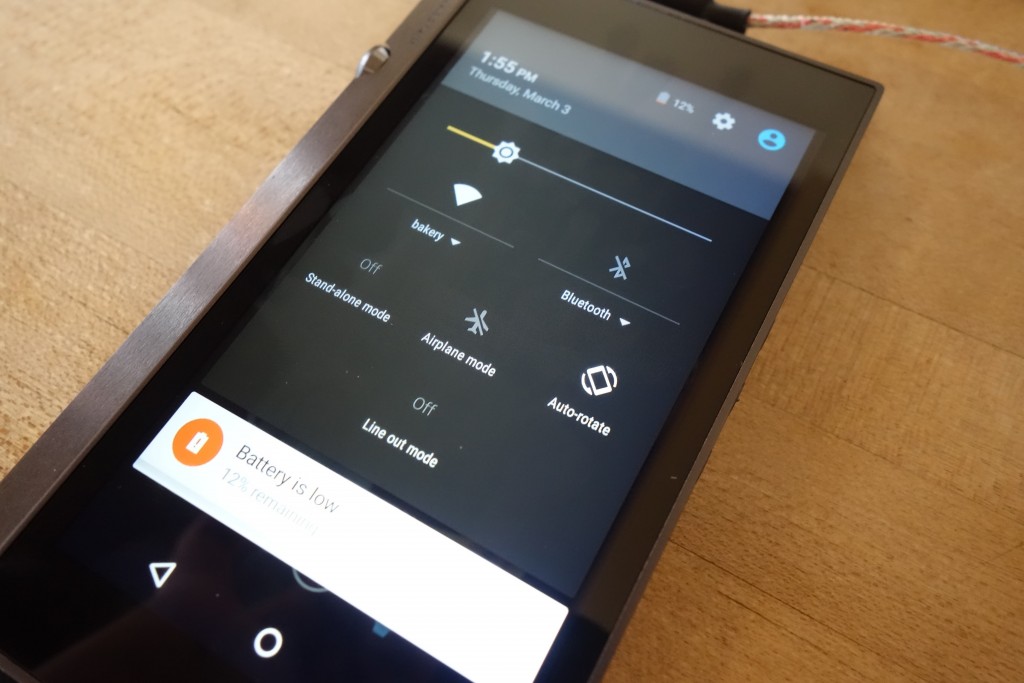 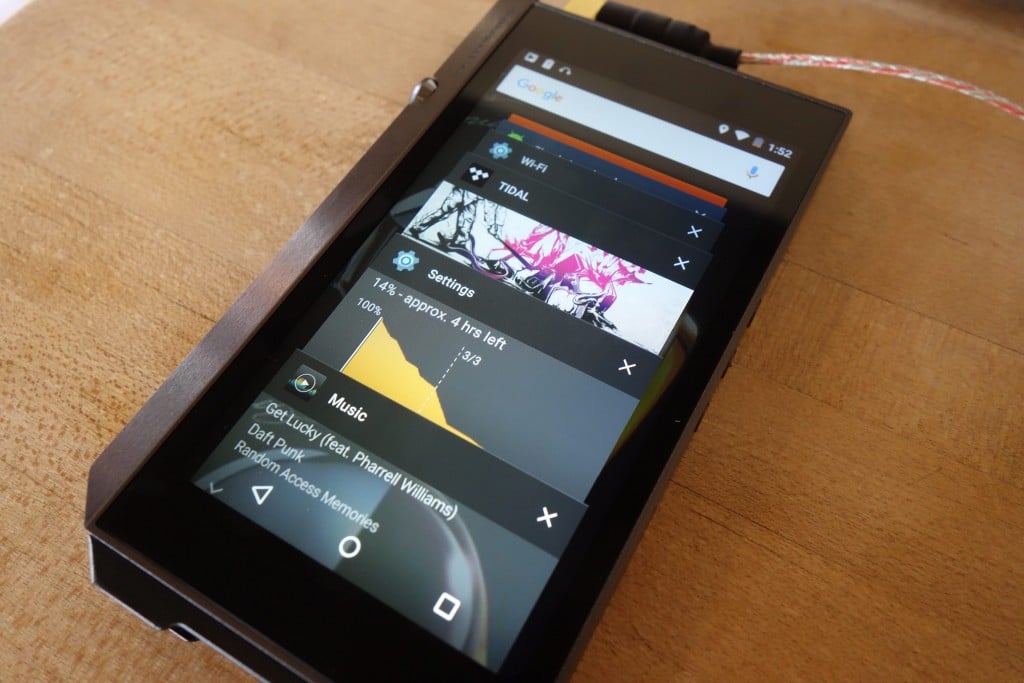 But we can’t forget that audio is the star of the show. It’s hard not to critique the XDP-100R as a smartphone, because it looks and acts like one. The sound features present the different story. 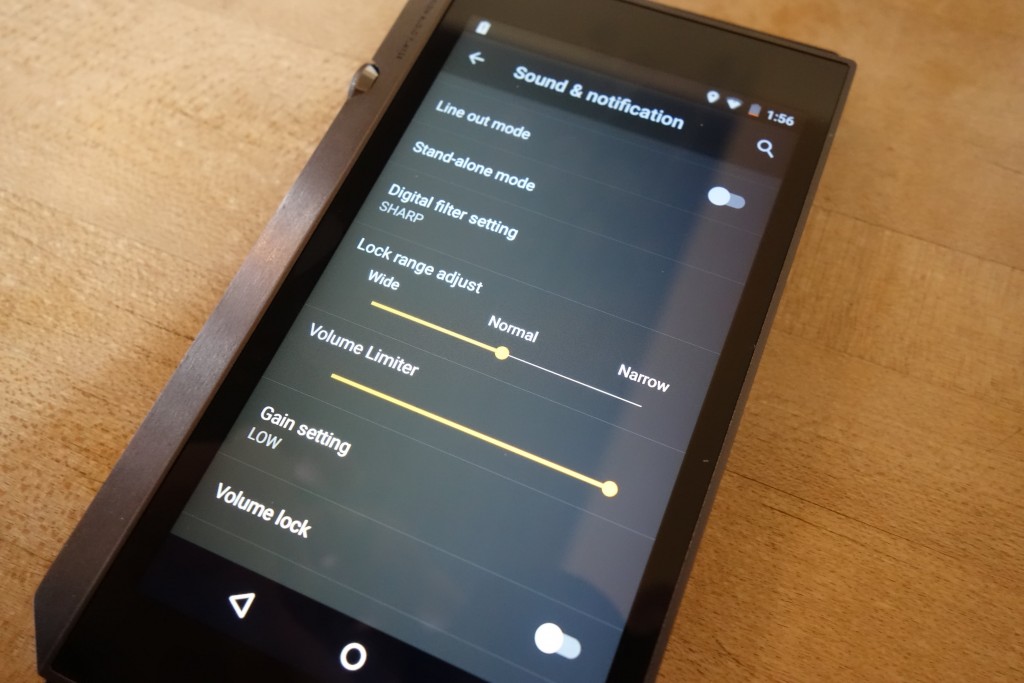 Line out mode maxes out the headphone jack volume for external equipment use and Stand-alone mode is a switch to turn the device’s radios and screen off when listening to stored music (saves of battery and Pioneer says it improves audio quality). The gain (amplification) has low/med/high options, for headphones of differing sensitivities. You can even tweak characteristics of the signal with a digital filter; check out the manual for more details.

That’s not all. Pioneer’s music app has a few more sound settings (including quick access to the ones we just talked about). 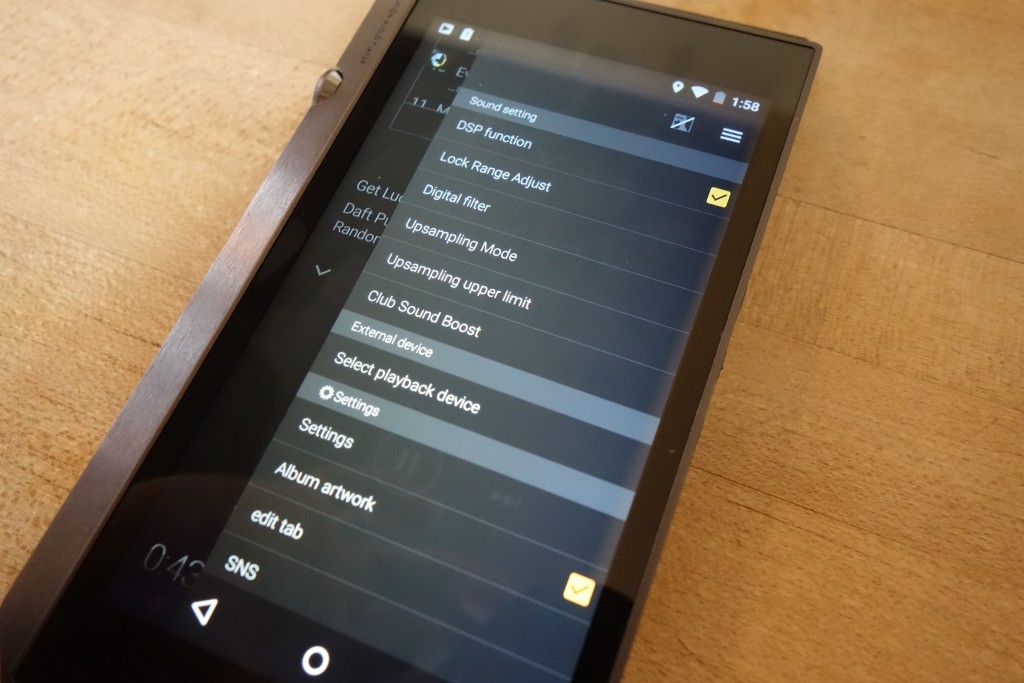 We additionally have a bass booster (called Club Sound Boost) that gives you three levels of strengths. If you have tracks that aren’t HiFi enough, the system can upsample them. Fortunately, these settings aren’t just exclusive to playback from Pioneer’s music app. They worked with my TIDAL use.

We also can’t forget about the equalizer. Pioneer provides real fine control of frequency tuning; you can freely change the shape of the response curve. 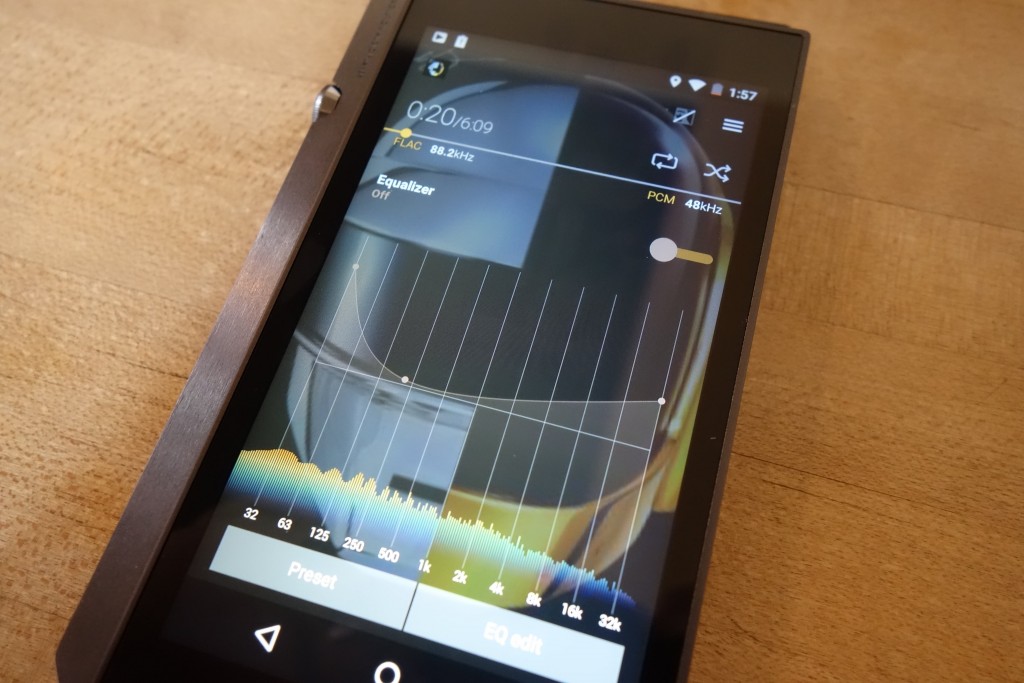 However, the custom EQ is particularly tied to the music app. So if you’re using a different player, you’ll have to use its EQ or a third-party solution.

Pioneer put a big focus on clean sound when building the XDP-100R. The internals are configured to minimize noise interference. 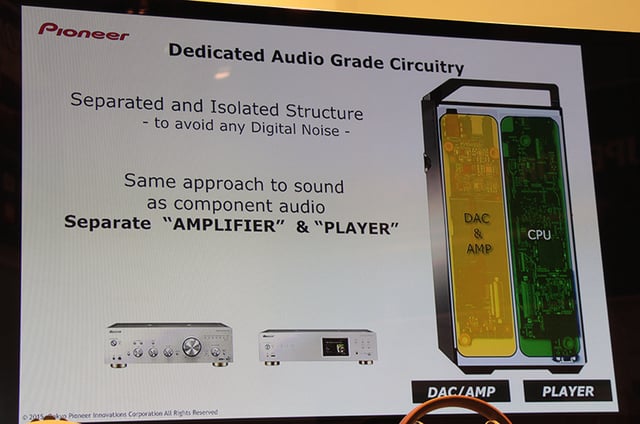 And I can certainly contend to that. Even with my highly sensitive Shure SE846 earphones, there’s a dead silent noise floor. You can also sense it from the delivery. Elements of the sound are crisp and articulated well.

The reproduction is tight and punchy, giving notes good distinction/separation. This helps in drawing your attention to little details in music that we sometimes miss. I’m mostly satisfied with Pioneer’s tuning of the XDP-100R, but it’s played safe in some ways.

I could use a bit more fullness. The overall sound is somewhat distant, almost like the XDP-100R is being shy about its capabilities instead of exuberant. I suppose that makes it more suited for analytical listening, but I personally like music to be more engaging.

A positive result of that is the excellent soundstage. The distance allows more spacial representation of the sounds. It’s more about how far outwards they can move, rather than the 3D space all around. That said, imaging plays nicely in the range and gives a fun experience.

Regarding the spectrum, I get the sense that Pioneer aimed for a neutral, “reference” sound. Bass, mids, treble – it’s all balanced. So you’re free to EQ if you prefer more from a particular range. 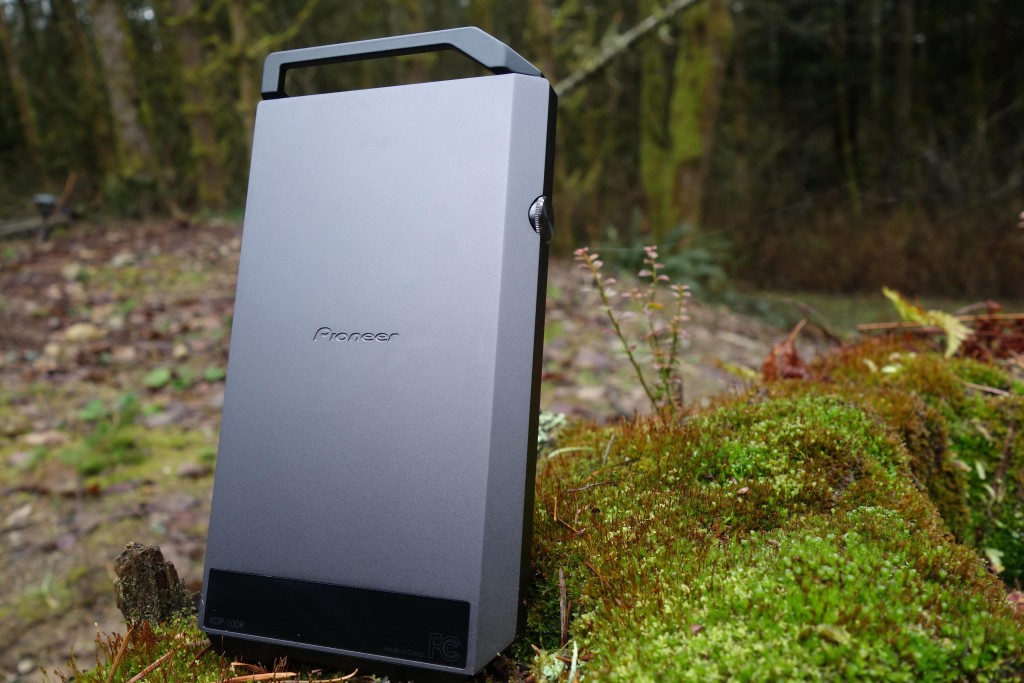 The XDP-100R is a solid DAP and I would definitely recommend it to someone in search for an Android music player. Only, if you’re not committed into the HiFi practice, the $699 asking price may steer you away pretty quickly. But in its defense, you do get a lot: a build as premium as they come, considerable storage, tons of sound features, and the fantastic audio quality that you’ve come for.