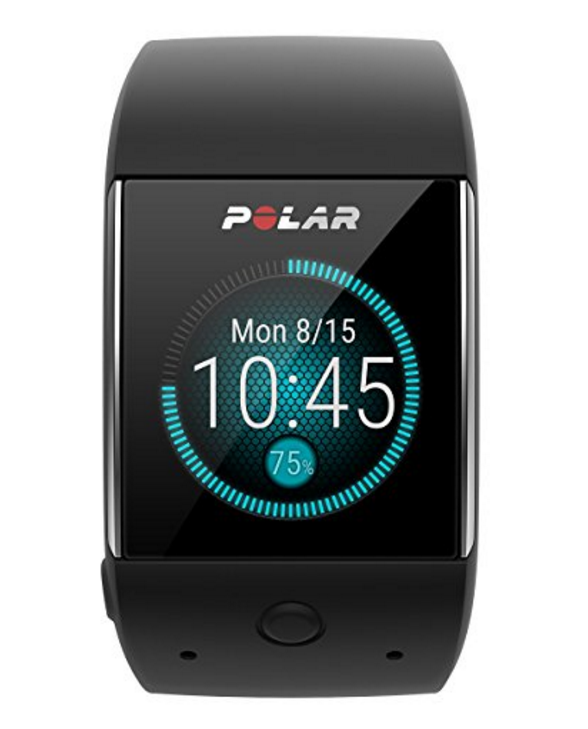 Polar is extremely well-known for it’s fitness tracking devices, and multiple models can be found at almost every retail extension. While they have tons of devices out in the market that are geared to the hard-core athlete, they had yet to really make any headway in terms of the smartwatch realm.

That delay ends with the M600 smartwatch. The M600 is Polar’s almost-flagship fitness tracker (eclipsed only by the ultimately athletic-minded V800), and the first to utilize Android Wear (and now Wear 2.0!; more on this shortly). And it does so well….so well, in fact, it’s kind of become a bit of a shape-shifter. Is it a smartwatch that does fitness tracking extremely well? Or is it a fitness tracker that has true smartwatch chops? Either way, it’s an extremely fun device to have on your wrist, particularly when paired with your smartphone. Let’s check it out!

The M600 is styled first and foremost as a fitness tracker, with flat, subdued lines; no ornate or formal design cues here. Still, it does provide an air of subtle class, with an all-black band and case (white is also available, but, why?) and an almost-stealthy matte finish.

Now don’t get me wrong: while very sporty and athletic looking in its own way, svelte this smartwatch is not. It’s a rather thick slab of metal, rubber, and silicon sitting on your wrist. While wearing it I received comments both on how large it looked, and how it “looked rather size-appropriate on the wrist”. It was honestly about a 50/50 split in opinion of size from onlookers. For me, it was a similar experience. While looking at this thing on my arm thinking, “man it sure looks big”, it would just as quickly disappear from thought while I wore it.

Same goes for wearing it at night to track sleep. When I first tried lying bed with it on, I thought there was no way I was going to be able to rest comfortably with it on. But lo and behold, it almost melted onto me and I never had a single issue with comfort.

As far as using the device, it’s been simplified, utilizing the touchscreen as much as possible. There are only two physical buttons on the thing: the power/back/Google button on the side, and the “fitness” button (my term) low-and-center on the front. This front button is used to access Polar’s many fitness features, including initiating a recorded workout, reviewing your overall day’s metrics, and accessing Polar’s coaching functions.

The entire unit is completely waterproof (IP-8X to be specific), so you track your swimming workouts as you’d like.

On charging, I got just over 2 full days of regular use (watch, Android notifications, fitness and exercise tracking) until I had to plug in. 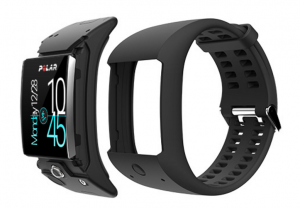 The stock band (you can replace it with other options) is a comfortable and rather soft rubber. But it isn’t all good news: I regularly had issues with the band loops continuously sliding down, exposing the band to flap around. It wasn’t just vigorous exercise that caused this, either; a simple 9-hole round of golf caused this to happen at least 3 times…it started to drive me nuts.

The M600 is just a fantastic mix of smartwatch and fitness tracker. The recent addition of Android Wear 2.0 provides a bunch of new features, like the ability to download native apps

from the Play Store right from the watch, better reply ability for messaging apps, and much-improved battery life.

This is definitely a step above the Fitbits of the world. The larger color screen and full Android Wear 2.0 integration see to that. Even something like navigation works well enough on the M600 that it allows you to keep your smartphone in your pocket more than you’d normally have to.

Even small touches, like screen sleep and wake, are well-implemented. When you bring the M600 up to your face, raising your forearm and/or twisting your wrist, the device is quick to wake, turning its display brightness way up for easier viewing. After just a few seconds of inactivity, it just-as-quickly goes back to sleep. You can also just tap the screen for a quick wake-up.

Again, with only two physical buttons, this device if very touch-intensive. Directional swipes take you to the notification pane, settings screen, other watch faces, fitness sub-screens, and the like. The device also allows for gestures to control your device, but honestly, it can seem pretty silly at times (waving your arm upward into the air just to ‘swipe up’…my wife was literally laughing at me when she caught me trying this out).

But that said, colors are very vibrant and I generally enjoyed looking at it. One niggle is that the primary left and right swiped on the device while in base clock mode is to switch around clock face options, which I did unintentionally more that once. Why this isn’t buried at least one level deep I don’t know. Maybe Polar found that peeps like messing with the faces a lot?

While the interface (and Android 2.0) is generally very good, I did get a little tired of addressing notifications via my wrist. When your phone is busy with incoming emails, messages, and notifications, I experienced general “swipe-fatigue” with all the flicking to and fro to clear these from the M600.  There is a “clear all” button to hit but I never remembered to use it. Now, this isn’t a ding on the device, specifically, it did hamper the overall smartwatch experiences for me. Do with that what you wish.

Using this device does require you to install the Android Wear app on your smartphone. This allows all the magic syncing to happen. Here you can also adjust some settings, like which apps you’d like blocked from appearing on your M600, or finding even more watch faces. You can even take a screenshot of your M600 display remotely (though I have no clue why you’d need to do this; features for features-sake, IMO).

One interesting feature I kept playing with is a remote shutter option for your phone’s camera. Not only does it remotely close the shutter (once you press it there’s a three-second countdown), but you can also get an, albeit small, preview of the image as the phone sees it before you take the picture. This could become pretty slick in terms of landscape and low-light photography, where you are looking to minimize any and all camera shake. Heck, you could also use it to be part of the family picture, framing and taking the photo while in front of the lens.

As a “daily driver”, the M600 is a smooth operator. As stated before, the screen is bright and colorful, and responsiveness to my touching and swiping was nearly 100% spot-on. Notifications come into the watch almost instantaneously with my smartphone, and addressing them on either device updates the other just as fast. Android Wear boasts the ability to reply to messages right on the watch; you can like (thumbs-up!), try to tap on the ridiculously small predictive keyboard, or hand-write on a 240-pixel-wide screen and hope for the best. Obviously none of these are ideal, but they’re trying!

As a fitness tracker I loved this thing. It does a very good job of tracking and breaking down your daily activity and workouts. It also integrally connects to Strava if you’re a biker or runner. I used it for several exercises, including weights, cardio (inside & outside), and even golfing.

If the M600 does have a weakness, it’s in the GPS, which can be a bit slow/delayed and/or inaccurate. I even noticed this when using the M600 as my navigation screen; it had trouble keeping my current location current.

Of course, with the fitness tracking comes the Polar Flow App and website. The app does a very good job of breaking down your daily activity and detailing each workout, as well as tracking your general level of activeness and sleep quality. There’s much more to this app and website than bears writing here. I took several screenshots for your viewing pleasure, to give you a feel for the interface:

The Polar M600 is a device that I had no intention of loving at the end of my review, but that’s exactly where I’m at. I’m not even a watch guy in general, but I continually found myself putting it on once charged and using it throughout the day. In just over a week it became a staple part of my technology arsenal, I like it that much.

The M600 does a incredible job of melding smartwatch and fitness tracker functionality and looks that I can’t tell where one stops and one begins. And that’s a great thing; a “holy grail” of sorts in this niche market. If you are in the market for a higher-end wearable, please give the M600 your most serious consideration!