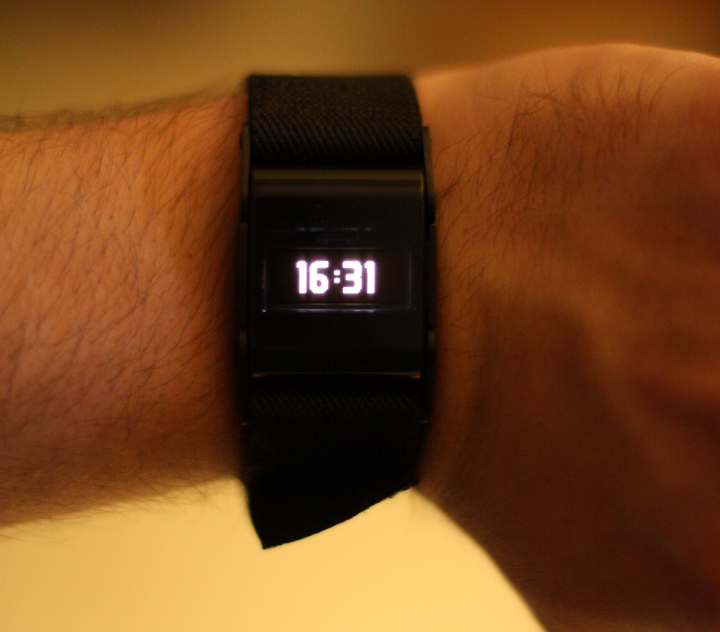 While smartwatches and fitness trackers are taking the tech world by storm, PulseOn aims to put a dent in the competition’s numbers.

Smartwatches and wearable fitness trackers are relatively new to us, though the idea has been around for quite some time. Something you can wear on your wrist that tracks your data while exercising is a great idea, especially if the price is right. We’ve seen watches that gravitate more towards notifications, telling time, being readily available in all weather conditions, or fitness and heart rate tracking.

The entire goal of PulseOn is to focus on heart rate monitoring, while offering fitness tracking functionality and the occasional telling of time. PulseOn was born out of Nokia back in 2012 with one main goal: to offer an easy way to check your heart rate. We got our hands on one a few weeks ago, and we have a pretty good idea as to whether or not you should buy one.

Before we give it a final score, we have some stuff to talk about. First and foremost, this isn’t a final copy. It’s a beta release, and it has a good amount of bugs in the hardware and software (most of which are being addressed before the final models are for sale). We’ll let you know which will be fixed later in the review.

PulseOn isn’t like other fitness trackers. Sure, you can track your run through the PulseOn app and check how many calories you’ve burned, but it aims to be the best at one thing: monitoring your heart rate. This isn’t a new idea, though. We’ve seen other fitness trackers monitor heart rate, but much of the time it’s inconvenient or inaccurate. We’ll take a look at a the performance and accuracy of PulseOn a bit later. 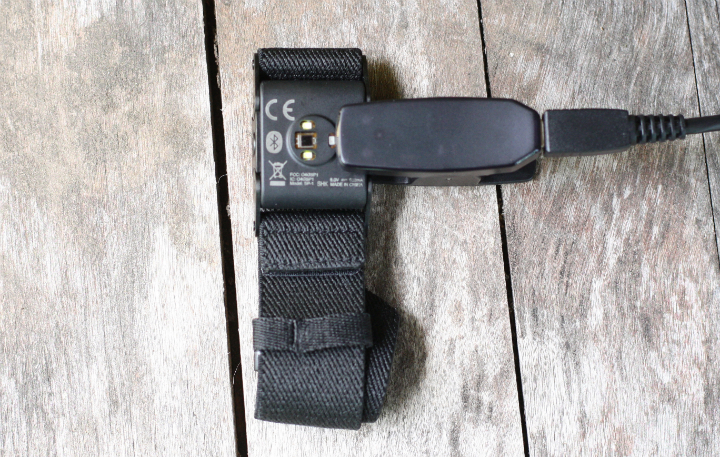 The look and feel of the device is simple, no-frills, and light. It offers a small square display with metal hinges that attach to the strap. The left side houses a start/stop button, while the right side holds a scrolling button. Around back, you’ll see the heart rate monitor and two charging pins on the right.

To charge the device, you’ll need to plug in the charging clip that’s included in the box. It’s a bit difficult to find the connectors, but once it’s secured, it’s pretty sturdy.

The strap is made from a stretchy cloth material that allows for easy removal. It’s comfortable, doesn’t irritate the skin, and is a whole lot better than a runner band. The one main downside to the strap, however, is that we’ve had to re-tighten the strap multiple times while exercising. The band comes a bit loose, pretty often – something we’d never see with a more conventional fitness tracker band.

Other than the quick look at the hardware features, we’d say the overall design could use a bit of work. It’s certainly not the most attractive device, but it’s far from the worst. It works well, and I suppose that’s all that matters. Let’s begin the software section by talking about the application. It looks really great from a design standpoint. The functionality, not so much. At least not yet. This is one of those problems that PulseOn is working on to be improved by launch date. It’s extremely slow, jittery, and just not that fun to use.

When you boot up the app, you’re whisked into a tutorial on how to use PulseOn and the app together. Once you complete the tutorial, you’ll see three main screens: one to show your latest event, the next to show your recovery time and fitness level, and the last to show your complete history. If the app ran smoothly, I wouldn’t have any complaints, whatsoever. And I’m pretty certain this will be completely ready for everyday use on launch date, especially because I’ve already gotten an update about once a week. But the app is where you’ll spend the least amount of time.

Once strapped on, the PulseOn has two main modes: standard and sport. Hit the right button to scroll through time, current heart rate, and a few statistics that have been previously recorded. There’s no shake to wake the device, so if you’re wearing it as a watch, be prepared to press a button every time you’d like to see the time.

Sport mode is activated by pressing the left button to begin recording your workout. This is where you can check out the timer, heart rate, distance, time, and training effect. These are all pretty useful while you’re exercising, given that you’re in a low-light situation. More on that later.

Overall, PulseOn works the way you’d want it to. It’s extremely easy to begin a workout, though a little annoying to do something as simple as check the time. 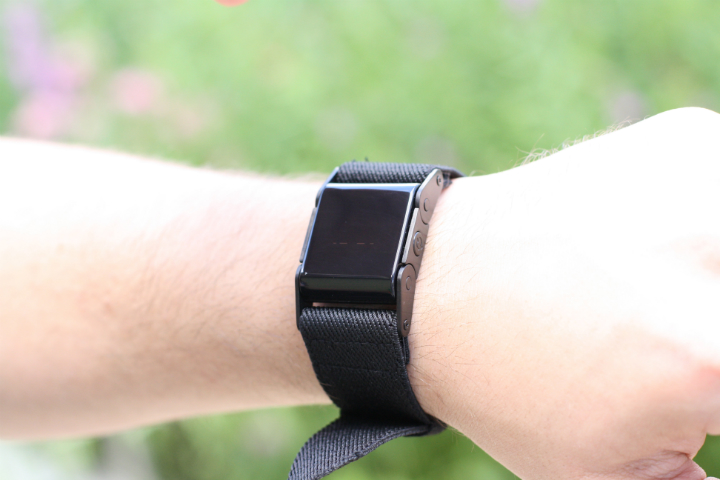 Most importantly, we need to talk about the screen. It’s small, and offers all of its useful information in a light-orange color. It’s great to look at while indoors, but if you try to look at anything while outdoors (where you’ll be using it most), it’s barely there. Text is faded to the point where I needed to put the watch up directly to my face to read anything. Especially while working out, I couldn’t check the correct time I was at during my run. This is mostly due to the poor screen and the small seconds counter in the timer. Unfortunately, there’s no way around that. You’ll need to squint to read anything outdoors, which isn’t really ideal at all.

The heart rate works absolutely great. It doesn’t stutter or give any false information. We tested it against a traditional chest heart rate monitor, and the results were spot-on.

Let’s move on to battery life. PulseOn is quoting up to ten hours of sport mode use before the battery goes completely dead. In my experience, I couldn’t make it an entire day without needing to throw it on the charger while in standard mode. Since this is a pre-production model, though, I’m withholding my reservations for now. We’ll have to see when the final units ship.

One great thing about PulseOn is the ability to record data without a phone. If you go for a run, just enter sport mode and go. Once you pair your device after the run, the info will sync straight to your PulseOn app. This is especially handy when you don’t feel like taking your phone with you for a super long run. Of course, it won’t track any distance information without a paired device, but it can give you the other vital information you’re looking for.

Overall, PulseOn works great for fitness tracking, and the ability to store data temporarily without a paired device is a huge plus. However, the screen and strap could use a bit of work.

This is a difficult question. Since this isn’t a finished model, I can’t really say. But what I can say is that PulseOn is headed in the right direction. They’re working hard to get some hardware and software features ironed out before launch date, which is quite respectable.

It’s available as an IndieGoGo campaign, though the product is completely funded. This is essentially a way to manage preorders, something that many startup companies struggle with. If you’d like your own PulseOn, you can preorder one for $169, while waiting for launch date will cost you $200.

Though this isn’t completely finished software/hardware, what do you think? It’s certainly difficult to pick this over something like Samsung’s Gear 2, which also offers a heart rate monitor. PulseOn is most likely more accurate, so that’s also something to take into consideration.

If you’d like one of your own, head to the IndieGoGo page to pledge!