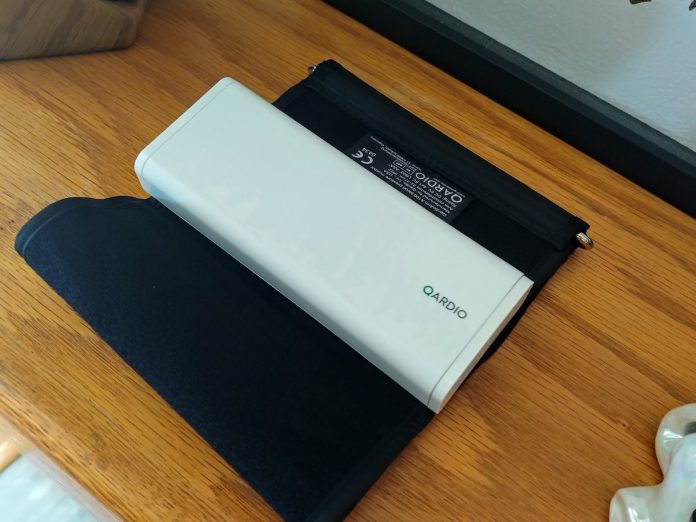 As you may have read in our review of the QardioBase 2, we’re fans of Qardio’s approach to product design. With devices and an app that do what they do, well and eschew frills and extraneous features, Qardio’s plan is focused and extremely effective. While the Base measures weight and body composition, the QardioArm measures blood pressure and heart rate.

The device is almost painfully simple. Unrolling the cuff from the device automatically turns it on (and vice versa), mitigating the need for a physical switch. After sliding your arm through the loop and securing the cuff, all you need to do is open the Qardio app and tap it against the unit to instantly pair and connect. From there, pressing the Big Green Start Button takes your measurements. Results transfer automatically to the app (and to your doctor, if you have that functionality enabled). Simple and painless.

The QardioArm is not a pretty device. Where the QardioBase 2 is beautifully designed and a joy to use, the Arm is simply a brick with a cuff attached to it. Which, honestly, should be expected given the utility of it. The band is very comfortable, with low-profile, high friction velcro to secure it. The unit itself contains four AAA batteries, which is a rather disappointing departure from the internal, rechargeable Li-ion battery of the QardioBase 2. A small green/red LED sits on the unit to display status. It comes in four colors: blue, red, gold and white, which makes it a bit more aesthetically pleasing, I suppose.

The QardioArm does precisely two things, and does them both exceedingly well: it measures blood pressure, and it measures heart rate. That’s it. As long as you follow the directions – don’t talk, don’t move, and relax – it does its job. And while the device will be more useful to people that need to actively track their blood pressure, heart health is important to everyone.

Unlike the QardioBase 2, which automatically detects a user and can store data for up to a dozen people, the QardioArm has no onboard storage. Instead, it can pair with up to six devices via Bluetooth and uses those to identify users. This process is as simple as launching the app and tapping your phone to the unit until the Start button on the app switches from Gray to Green.

This convenience is thanks to a patented, proprietary technology that allows the QardioArm to overlay atop the Bluetooth pairing process. The unit pairs and connects to whichever phone is touching it with the app open. I, for one hope Qardio decides to license this technology to other companies. Imagine connecting to headphones, speakers – even a car – just by tapping your phone to it with the proper app open.

At $99, the QardioArm sits at a similar price point to other Bluetooth blood pressure cuffs on the market. The Omron 10 Series is similar in function, but features a separate screen to display information in addition to sending information a phone. This makes it a little more independent but also quite a bit less portable, requiring a case to carry around. The Nokia BPM is the same MSRP as the QardioArm and features a similar form factor, though it’s perhaps a bit more stylish. Since Qardio’s solution is roughly the same price as the rest of the competition, it sits at a good value. Its simplicity and ease of use are worth the cost of entry.

The QardioArm retails for $99.99 and is available directly from Qardio, Walmart or Target. However, the cheapest price I was able to find reliably was at Amazon, for $81.35.