Announced back in September the Qualcomm Toq is a unique smartwatch experience first targeted at developers. Paired to Android phones via Bluetooth, one of its key features is its Mirasol display helps set it aside from other wearable devices.

As someone who has not spent time with other smartwatches, I was curious to see how a general consumer would find the developer-centric device. After spending roughly a week with the Qualcomm Toq I am really liking a few things and loving a few others. This is not to say, however, that it’s a perfect device; a few items downright frustrate me.

Starting with the outside of the box and its artwork and details I felt as if Qualcomm had targeted this to a wider audience than just early adopters and developers. This thing looks as if it could be found on the shelves of a retail store or electronics outlet. 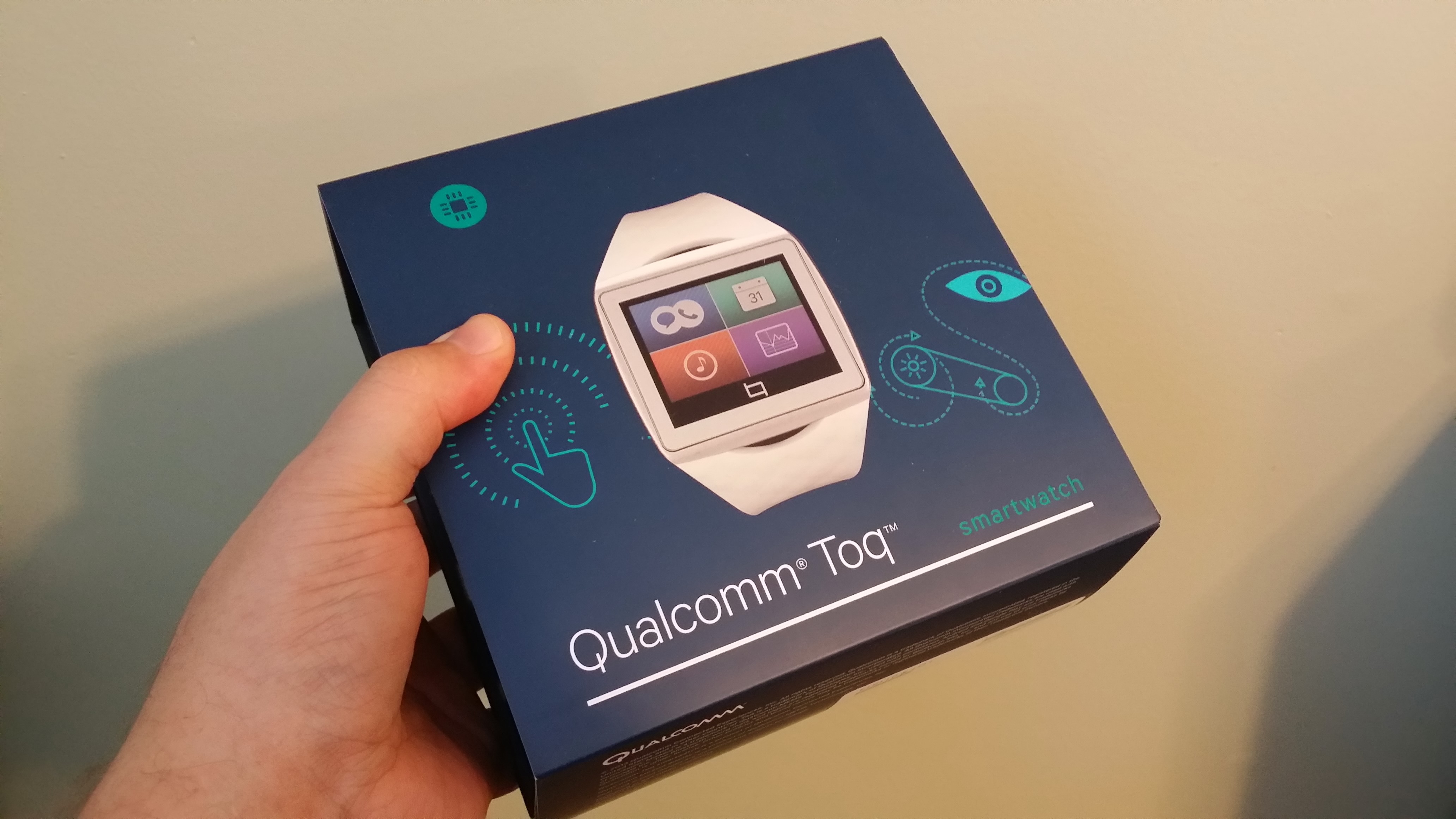 Cracking the box open you find the watch nestled in a foam holder, a handful of pamphlets and papers, and a strange mystery box. What it is? Simply put, it’s the unit you’ll need to use to charge the watch. There are two empty spots inside the box; these are are reserved for the wireless earbuds due later. Pushing the little button on the left hand side of the now-open box a piece of plastic rises up to sit perpendicular to the unit. This is the specific component that charges your Qualcomm Toq. 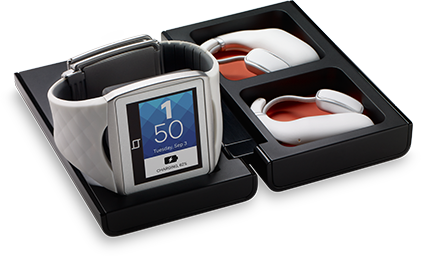 I searched the watch over, looking for a microUSB port and a mild sense of panic/agitation set it. How am I going to charge this and will I need to do it every morning or evening? Thankfully, the battery life on this smartwatch is very generous. The idea of putting my watch back on this block each night or having to get back to the office desk was not something I looked forward to doing.

You’ll want to put the charging unit on your desk, night stand, or somewhere you find yourself every few days. Sure, you could do the car, but this rectangular thing is designed for longer term placement. Hey, at least we’re not talking about some proprietary cable. To me, carrying a separate cable around is more frustrating than this type of scenario.

One gripe I have with the Toq is that you must use this unit to power on the device. You can directly power off the smartwatch but are forced to return it to the base to turn back on. On a positive note, there’s no real reason to have to turn off the watch and this problem is not as bad as it sounds.

The model I reviewed featured a white, limited edition Toq. I found the band to be rather fashionable and the whole thing looked generally futuristic. There’s a “quilt” pattern imprinted ever so slightly on the bands which provide a nice touch.

Speaking of the bands, you have to cut the watch strap to fit. Qualcomm provides a number of spring-loaded pins to put the somewhat flexible band into place; only one is needed as the others are extras. A word of caution: you can always go shorter and tighten the band up. Cut too much off the band and you’re done. Period. You cannot buy new bands. Not to worry, Qualcomm does have some instructions and a handy video to help guide you through the process. Just don’t put on a bunch of weight after you set yours up.

The display itself is rather big (1.55-inches diagonally) and the whole experience feels clunky at first. Clasping the watch is nice and solid and everything feels like it’s locked in tightly. As a guy who stopped wearing a watch right around the time he started carrying smartphones, it felt foreign to have something so big on my wrist. 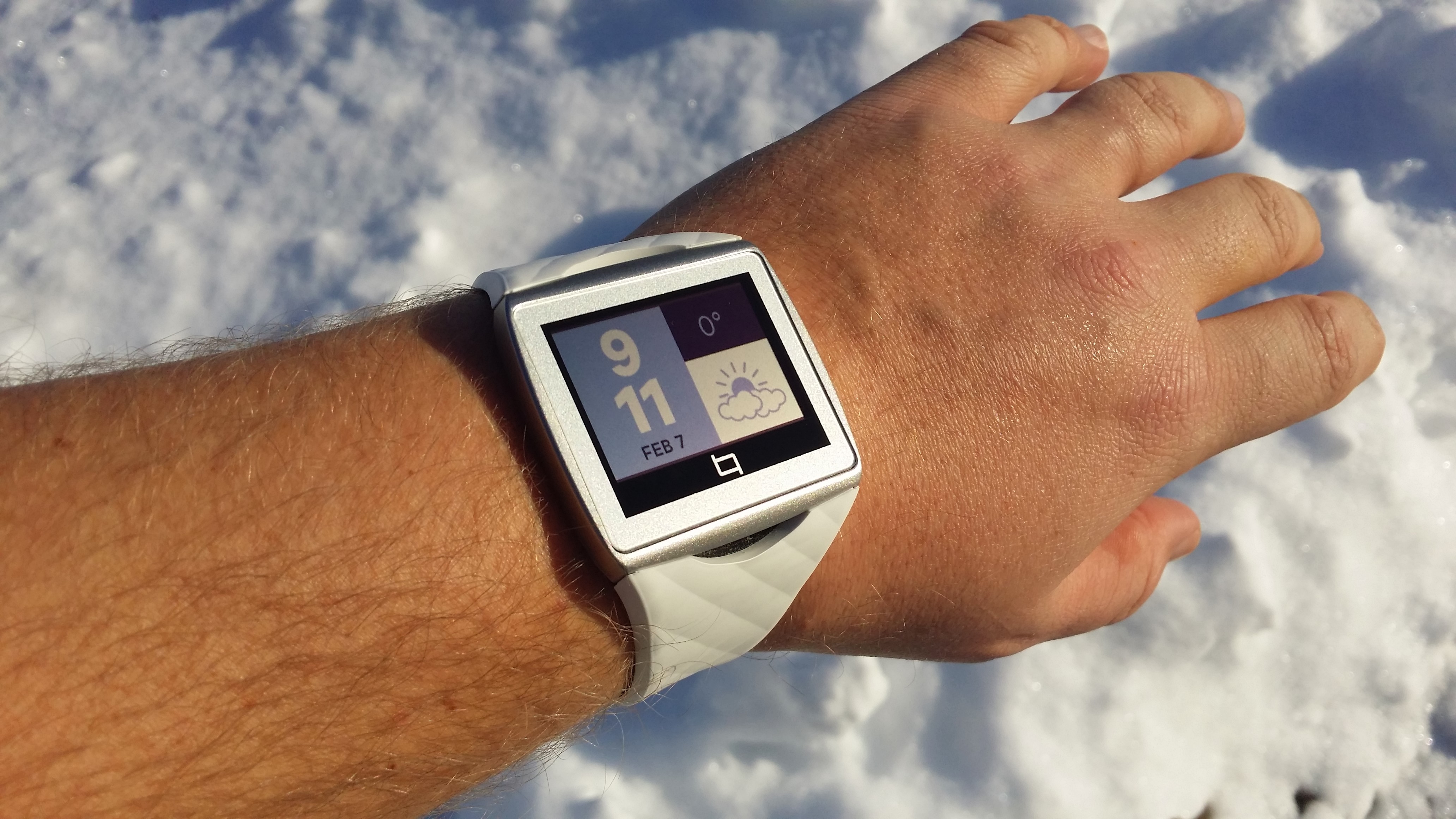 Because Qualcomm’s Toq employs a Mirasol display it’s an always-on screen with time, weather, or calendar appointments. Indeed, this is a color display that provides some depth and character. Do note, however, that it is nowhere as vibrant or rich as the press photos lead you to believe. Heck, even the stuff shown inside the Toq app (later) aren’t represented accurately. And, when sitting next to a sharp, bright smartphone, the image looks even worse. My advice: lower your expectations here and you’ll be alright.

There are no visible buttons on the watch however there are two that can be actuated in the bands. On the one closest to the user you have a home button. On the opposite band is a place to double tap which brings up the front lighting. There’s no backlight to Mirasol displays so Qualcomm lets you shine a light on your image from the front. You’ll become quite familiar with the light as there’s literally no way to see the screen in the dark.

All in all, the display is very crisp and looks sharp from any angle. You don’t see any sort of pixelation or fuzziness to the image and in most lighting conditions it’s gorgeous. It’s just not as bright as what’s advertised.

To set up the watch and personalize the experience you will need to first download the Android application. I was really impressed with the app, its layout, and associated options. It’s here that you pair the Toq to your phone and then adjust things such as the clock and icons. You can choose from any combination of 17 different clock styles and 6 icon styles. Down the road I would love to see more options offered up, be it from Qualcomm or from other developers.

The app also lets you configure which music player you want as default, which apps you want notifications from, and other things such as light timeout.

To me, I find the Qualcomm Toq is most easily described as an enhanced notification system with minor functionality. It’s great for letting you know who is texting you, the basic details of an email, or who might have liked that latest Instagram photo. You can easily toggle which apps you care about so that only the important stuff gets through. Don’t want to be notified of every Facebook like or social media update? Leave it off the list.

The Toq is connected via Bluetooth and provides for some basic interaction between the watch and your smartphone. It’s easy to accept or reject a phone call, play music through your favorite media player, and read incoming text messages. On the other hand, you can’t help but feel handcuffed by the inability to do a little more. You do have some automatic replies, though to shoot of as text messages. Can’t take a call because you’re in a meeting? Presto. Sadly, there’s not much beyond as it pertains to actions. 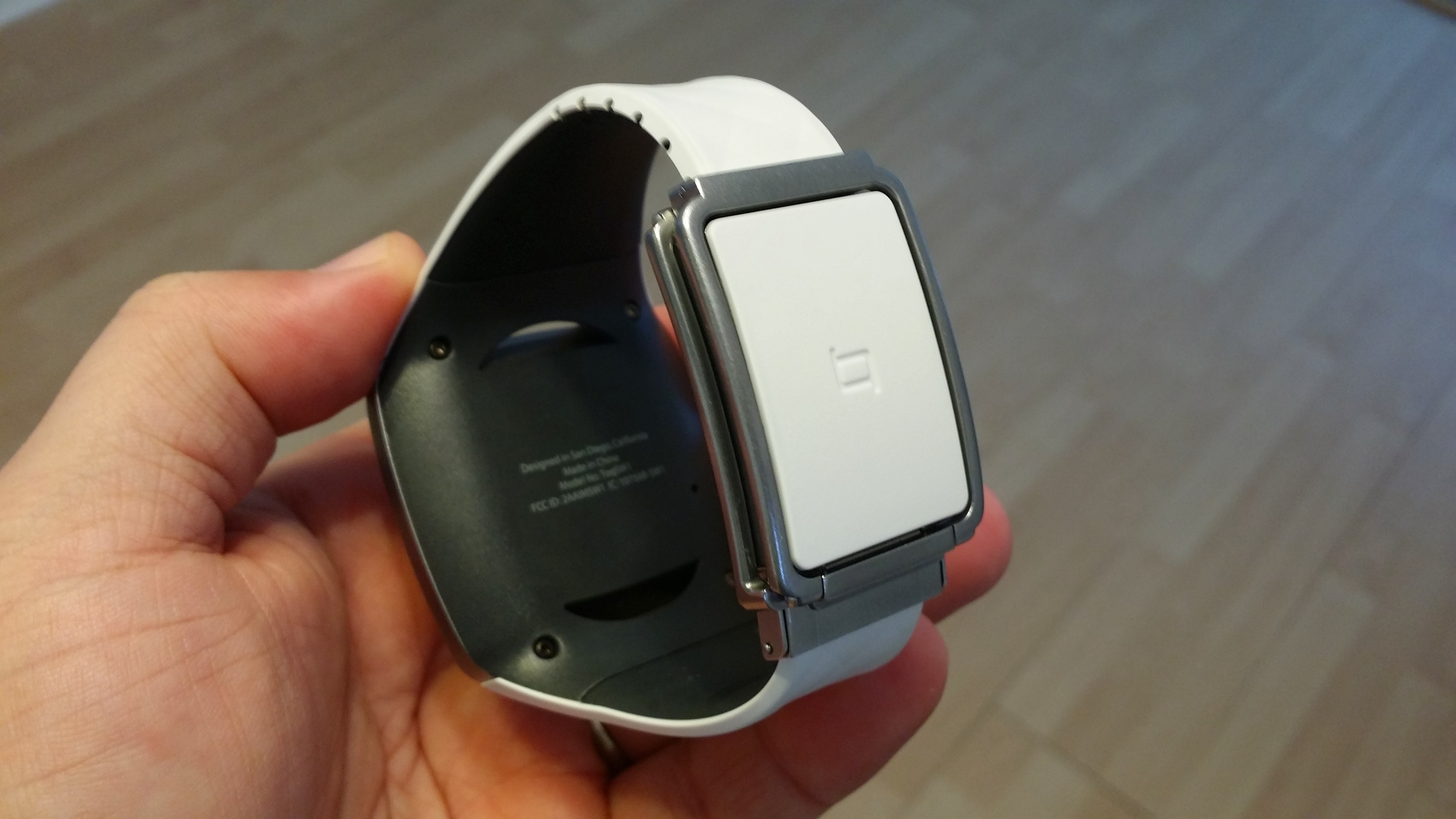 I would really like to see some added functionality for emails and other apps. Nothing too crazy, of course, but just stuff we can do from our notification bar from smartphones. I found myself wanting to delete or archive emails, delete texts, and like and favorite things from select apps. I get that the screen size limits much of this but it feels like there’s room for improvement.

Along the lines of notifications, the Toq works well if you are only receiving them one at a time. Get a handful of emails or texts at once and things get hard to discern. And, because you cannot dismiss or delete them, it’s tough to do much from the watch.

Navigating from feature to feature is a breeze; everything feels intuitive. Swiping from side to side will lead you back home or into “applets”. These applets can be set as shortcuts to features like calendar, music player, settings, weather, etc. It’s not necessary, though, and you can quickly get to each of these from the home screen. With only a handful of applets to choose from, it’s not a feature I used much.

If there’s one true standout feature in the Qualcomm Toq it’s the battery life. Tucked inside the clasp of the watch band, it’s impressive to say the least. Thanks to the Mirasol display and its special powers I’ve been getting 4-5 days of usage out of the watch without charging up. Do note, however, that if you take your phone out of range from the Toq the battery will deplete pretty quickly. Twice I left the Toq on the kitchen counter overnight and took my phone to the bedroom to charge. Twice I woke up to messages that the battery was critically low.

At $350, the Qualcomm Toq does not come cheap. It’s priced higher than the Samsung Galaxy Gear and more than double the Pebble. On one hand I get that it’s a developer device like Google Glass. Early tech is unfortunately more costly than second generation and general consumer wares. On the other hand I felt like there could have been more for the money. I am not an expert on pricing stuff like this but I’d like to see it at least $50 lower, perhaps more.

After spending the first few days with the Toq on my wrist I took it off for a day then repeated the cycle. I was looking to see how much I missed it when it was not there. The first day I was without it I did not care all that much. The second time around I missed having it much more. I had grown accustomed to managing music in the car without fussing with the phone; I felt a slight nuisance in having to grab my phone to see who was texting or emailing.

The Qualcomm Toq is not for everyone. Then again, “smartwatches” didn’t even exist two years ago. We’ve lived without them for ages and many people will never think twice about owning one. You really need to convince yourself that you need one today but that is going to change a year from.

As competitors come to market with cheaper and/or more powerful experiences the space will become fun if not crowded. Qualcomm is in a good position with its first go at things and I like to think they’re always looking for ways to improve in mobile. For something first designed with developers in mind it’s quite a great starting point. I’m confident that pricing will come down over time and features can be baked into future models.

If you’re a developer or someone who likes to be on the fringe of new technology, the Qualcomm Toq is a no-brainer. For everyone else, however, I suggest using a little bit of the brain first.