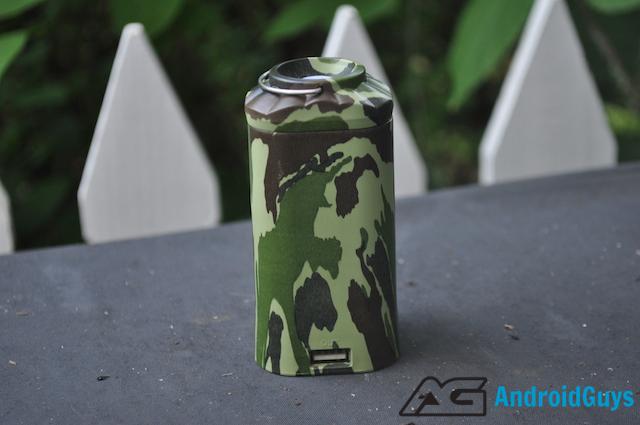 Up for review today is the RAVPower Element 7800mAh Portable Charger and my first impression of the camouflage device was “meh”.  I have only seen a handful of portable chargers that looked decent, but looks are really not what matter here.  What really matters is the juice this puppy packs and it packs a punch!

When I first received the RAVPower Element, it came in a nice, clean package.  After opening the box I discovered my newest (and favorite) portable charger, but camouflage, really?  I mean, maybe a subdued color like olive green or black, but I was caught off guard with the camo.  However, looks aren’t everything, its what’s on the inside that counts right? Well that’s what my mother keeps telling me!

The charger has two ports, micro USB for charging and a USB port to charge your device.  It has a power button for the handy built in LED light at the top and four blue lights that show you how charged the charger is.  The device is a decent size reigning in at almost 4 inches tall and a diameter of about 2 inches.  The charger weighs about 7 ounces so it isn’t going to weigh you down when you throw it in your backpack.

It also comes with a handy carabineer to attach to the outside of a pack as well.  The charger is built well and I feel that if I dropped it, I wouldn’t have much to worry about.

The first thing I did when I received the charger was to plug it in and charge it all the way up.  RAVPower says you can charge the device over 500 times before it kicks the bucket, but I will definitely get my moneys worth by that time.  The output of the charger is 1.2a so it charges fairly quickly.

I have been using my HTC One M8 (2600 mAh) and Nexus 7 (4350 mAh) tablet to test the performance of the device.  The best I gathered from testing the portable charger was to get my HTC One M8 and tablet as dead as possible in order to see just how fast and how much it could charge.

After playing videos on my devices and keeping the screen brightness cranked all the way up, I put the charger to the test.  I first started with my HTC One with it at 10%, after an hour and a half, my phone was fully charged and then I slapped the Nexus 7 on it and did the same thing, now I know you’re thinking, “That Nexus is going to drain that charger dry”, but it didn’t.  After plugging in both devices and charging them to 100%, I still had a single light on the charger.

The test isn’t over yet.  I continued to do the same thing over the past two weeks with the same results.  I also charged the charger and let it sit for a week and it still held its charge without dropping a light.  I have been thoroughly impressed with the performance of charger it has exceeded all my expectations.

The RAVPower Element is also very affordable, coming in at $29.99.  The device is super affordable and if you’re an Amazon shopper, you can pick it up with Prime shipping (Free 2-Day) as well!

I highly recommend anyone looking for a portable charger that packs a lot of power and comes at a great price.  You can also check out all the other products RAVPower has to offer as well, here!