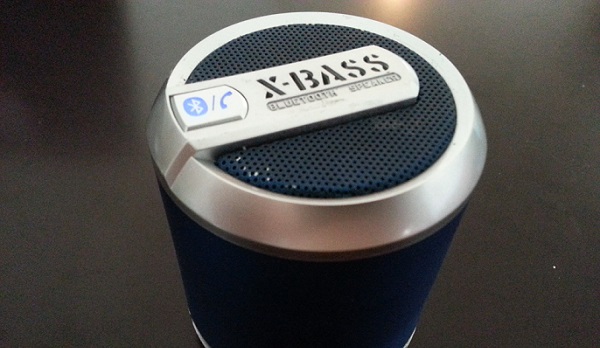 If you’re looking for a killer Bluetooth speaker with big sound for a small price, look no further. The Bluetune Solo from Divoom includes:

This reviewer had a review unit in blue, and it looked great. The device is easy to hook up to your phone or tablet, and – by the way – did I mention the sound quality? This speaker packed a punch that was completely unexpected, with noticeable highs (treble), along with seriously impressive bass. Like, seriously impressive. Bumping up the low end on the EQ from my Note II and hooking the Bluetune Solo really helped put the “Bass” in “Bassnectar”, if you know what I mean. Setting the Bluetune outside when I had some friends over had them looking around, trying to figure out where my “sound system” in my backyard was, only to find that it was coming from “that lit up blue thing” sitting on my barbecue.

The battery lasted around 8-9 hours for me when being used constantly. As far as standby time, it took the Bluetune Solo well over a week to die when not in use. When completely turned off, I found myself able to pop it back on and use it for the expected amount of time afterwards, meaning no residual battery leak. I would bet you could turn this thing off, forget about it in a box for 8-12 months, come back, and find it has the same battery level it did to begin with. Charging is also made simple with the fact that it takes a standard smartphone power adapter, so you can just hook it up to whichever of the 15 phone chargers you have laying around the house. Is it just me that has that? Surely that isn’t just me.

There’s also another cool feature you don’t see in a lot of wireless speakers, which is an auxiliary passthrough. Hook the device up via Bluetooth, move it, and now you can even plug in something else – say, your complete sound system or a pair of headphones – into the speaker. The only real downside, though, is that the passthrough is passive, meaning that audio will come through the speaker and whatever you have plugged into it, meaning you can’t really use this feature to plug in headphones and use it as a sort of Bluetooth headphone adapter. What it lacks in that department, however, it makes up for with the full Bluetooth 2.1 + EDR and full A2DP stereo support.

the bottom of the device lights up to the main color of the speaker, which looks pretty slick. On top of great sound, it has a great look when hooked up and being used. There’s also a call / play / pause button on the top, so you don’t have to go dashing for your phone or tablet when you want to answer that important phone call or hold the music for a second. In fact, the built-in microphone makes the job of taking said calls even easier, which is definitely a plus. Something this reviewer likes as well is the fact that you can hook up to your Android device’s audio only, and continue taking calls through your phone, or even a second headset.

All-in-all, this device gets about an 8.5/10 from me. Great sound, great looks, great functionality – however, I just can’t get past the passthrough that doesn’t stop the device from playing through the actual speaker when you plug headphones into it. Is it a small deal? Of course it is, but hey – I’m a bit picky. Sans that, this is a wonderfully refreshing little speaker, packed full of sound quality that will leave you wondering how all that sound is coming from something so small.

You can pick up a Bluetune Solo from Divoom at their website today for $49.99. For that price, you’ll be sure to be majorly impressed by the increase in sound quality you can get from your device, and you can do it for less than going with a bigger name that’s sure to sound just as good. The speaker comes in black, blue, white, red, and yellow.