Being addicted to gadgetry like many of our Android Guys readers, it is safe to say that I have been through literally dozens of bluetooth wireless earpieces to match the myriad number of smartphones that I have used over the years.  So I have to admit that I am a bit jaded when I hear about yet another wave of earpieces that promise to raise the bar in clarity and usefulness.  The truth of the matter being of course that culturally, earpieces are looked at as either rude or something that is not needed, even though we have many states passing hands free laws regarding driving and talking on handsets. I can’t tell you how many times my wife has told me to take out my earpiece when driving, let’s say it has been enough to relegate earpiece after beautiful earpiece to the graveyard of the family junk drawer, never to be used again.

All that has officially changed.  I can say that I have had my jaded attitude smashed by a little piece of hardware knows as the Sound ID 510.

The first thing that struck me about the Sound ID 510 when I received the unit was the fact that it actually looked good, I have had some ugly earpieces in my day, hulking masses of plastic that looked like I had Borg circuitry growing out of my brain.  Not so with the 510.  I received a small, sleek black unit, tucked nicely into a holster with a clip like a high quality pen.

When I put the 510 in my hand, the unit felt very light, but not cheaply made.  It did not feel “plastic-y”, it really felt like a nice piece of equipment.  Upon further inspection, I noticed that there was a mic screen along the whole length of the bottom of the unit, which I found intriguing to say the least.  Why in the world would they include such a large mic opening?  I was going to find out a little later in my use trials.  (hint: it has to do with the app that Sound ID wrote to go with this unit)  As you can see in the picture to the left, the unit has a button and LED light at the top.  What is not pictured is a handy slider button to power the unit on and off.  I love this, since it made it much less confusing to use.  Some earpieces I have had require an arcane combination of long presses and gyrations that would make the people in the Davinci Code envious.

After charging up the headset for the required time, I went about getting it paired with my Vibrant, a process through which I held my breath since in my experience pairing either goes without a hitch, or becomes a nightmare drama of trying everything under the sun to get it to work.  I was pleased when it connected right up, and was a little startled when a pleasant female voice chimed “connected!” in my ear when the pairing was successful.  A nice touch in my opinion, making it even easier to not even have to look at my phone when turning the ear piece on.  After connection, I decided to see what kind of functionality the unit had with the application that Sound ID created, called “Earprint”.  Again, I was less than excited, because usually when their is a companion app, it is a piece of junk that you really will never use.  Again, I was pleasantly surprised, as Earprint is not only a useful app with the Sound ID 510, but a necessary one. 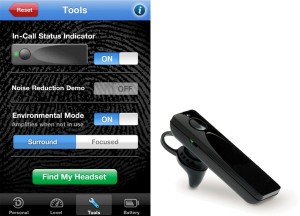 The app gives you an impressive set of tools to use with the 510, useful tools a that.  As you can see pictured to the left, the different functionalities in the app.  Here is a rundown of what you can do with Earprint

Now two things stand out in the app, and they are really cool, and downright useful.  The first of which is the environmental pass through mode.  One of the things I have battled in life is some hearing issues.  Never anything that would require a “miracle ear” or anything like that, but enough to be annoying.  The 510 has a bit of a solution for me.  Remember that long mic screen I mentioned above?  This is where it comes in.  The Earprint app allows you to use the earpiece as a sound amplifier.  When you turn on the environmental mode, it becomes a pass through speaker for your ear!  Now, is it amazing in quality?  No, but it certainly was enough to help.  One of my trouble areas in hearing is in the car traveling.  With the earpiece set to the pass through mode, I was able to pick up my families speech a lot easier.  That is a +1 in my book!

The pass through mode is a cool feature, but not the, well, coolest of the Earprint app.  One of the major complaints I have had about all of the earpieces that I have owned in my life is that they sound like absolute junk when trying to listen to music, or even during voice communications.  It is one of the things I have had to accept that most earpieces get the job done, and that is about it.  The 510 really does raise the bar in this area, using the app.  Under the “personal” tab of the app, there is a “matrix slider”, which as you listen to music allows you to adjust the sound quality of what you are listening to on the fly, and let me tell you, it really does work.  Now to be clear, this is not some high quality audiophile earpiece, it was never meant to be that, but it makes listening to music pretty enjoyable, and allows you to hear the full range of what the earpiece is capable of.

I enjoyed playing with the different sounds, and after a bit of trial and error, found the sweet spot where my audio sounded pretty good.  I also found that playing with the slider allowed me to personalize the sound for different songs, which was outstanding.  Listening to Umphrey’s McGee, I wanted a different tone than listening to my Phish collection.  It was nice to be able to do this on the fly.

Another functionality that I actually stumbled upon was the fact that earpiece is actually one long touch sensitive device.  The long part of the 510 allows you to adjust the volume of the audio on the fly, just by simply sliding your finger either up or down.  This was a tremendously helpful function, and showed how much thought went into the design and manufacture of the device.

After using the earpiece for a week on phone calls, listening to music and as a sound amplifier, I have honestly fallen in love with the device, and it has become a permanent part of my handset equipment that I carry around with me.  I can with all confidence recommend this unit to anyone in the market for a bluetooth earpiece.

The only sticking point that I found with the device is, as you probably guessed, the price.  This is not a cheap unit in comparison to other models out there.  The Sound ID 510 retails for $130 clams, which is about $70-$80 more than the price of midrange earpieces out there.  Expensive?  A bit, but I really think it is justified, the 510 really does shine.  If you have the extra coin, and really are looking for a quality piece of gear, the 510 may be for you.  I don’t think you will be sorry for plunking down that kind of cash.  Check it out and let us know what you think!