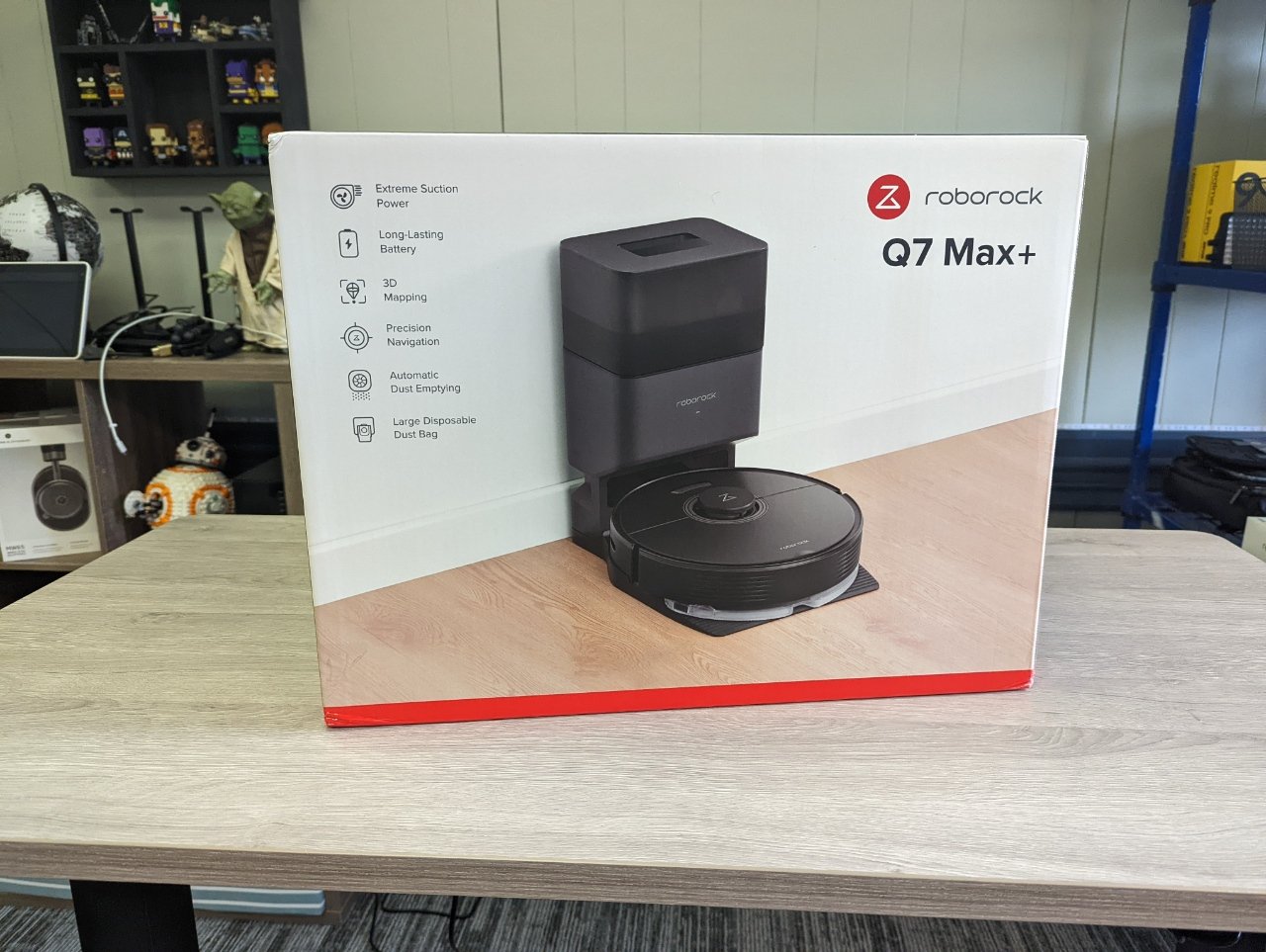 Smart vacuums as a whole have evolved quite a bit in a relatively short amount of time. The concept of a robot vacuum doesn’t feel all that old, and really seems to be hitting its stride in terms of what’s expected.

Likewise, Roborock has also made great strides in its short few years of producing vacuum cleaners. It routinely releases quality products that seem to raise the bar for what we look for in our smart household gadgets.

Its Q-Series of products, which launched in early 2022, is a less expensive approach to its S7 line. With prices that start at around $430, the Q family currently consists of a Q5 and Q5+ as well as the Q7 and Q7+.

While the Q5 and Q5+ are vacuum-only models, the Q7 and Q7+ offer both vacuuming and mopping capabilities. On the higher end, the Q7 series come in “Max” versions which are more powerful and come with auto-emptying docks.

The Roborock Q7 Max+ comes in black and white color options and look pretty much like any other robot vacuum. As you’ll find in plenty of models from various brands, there’s a circular protrusion that extends from the top to help the unit see where it’s headed.

At nearly 8.5lbs and 14 inches in diameter it’s a fairly big unit; it also rises almost four inches without extending the wheels. Moreover, that extra lift from the top may keep the vacuum from getting under select furniture. Results varied in my testing but it did get under a large majority of the chairs, beds, and couches in my home.

Upon opening the door flap on top of the Roborock Q7 Max+, you’ll locate the water tank (350ml) and dustbin (470ml). Unlike other models I’ve seen with mopping capabilities, the Q7’s water tank separated from its mopping pad.

The brush roller is easy to wipe down and keep clean as it rubberized and doesn’t have bristles. Good at grabbing hair, I’ve found it doesn’t get clogged all too easily. A side brush helps to direct debris toward the main brush.

As we find in other Roborock models, the Q7 Max+ utilizes PreciSense LiDAR Navigation to map out your living spaces. When paired with the mobile app you’ll get a 2D/3D map with visual representations of obstacles, walls, and more. Further, you can merge spaces, split rooms, create no-go zones, and manage cleaning cycles, auto-emptying, and a whole array of other helpful things.

I’ve found that the Roborock Q7 Max+ has great suction for a robot vacuum as it’s rated at 4200pa (Pascal units). Over the last few months I’ve largely kept the vacuum on the first floor of my home which is equal parts hardwood floor and carpet, with the occasional rug.

The Q7 Max+ does a fantastic job of grabbing dust and hair from the edges and corners, pulling things in from areas other vacuum cleaners might miss. When it comes to the rugs and carpet, the robot kicks in its Carpet Boost and seems to rev its engine. Still, it’s relatively quiet stuff that doesn’t distract.

One of the things I like most about robot vacuum cleaners is when they run in straight lines, mapping things out methodically. That’s definitely the case here as the straight lines tell me where it’s been and I know what it’s cleaned.

The Roborock Q7 Max+ boasts a 5,200mAh battery which is advertised as able to clean for up to three continuous hours, or an area of approximately 3,200 square feet. Most robot vacuums I’ve used over the last few years are able to accommodate my main floor inside of 45 minutes so this one is never truly put to the test. With that said, I have had no problems taking it upstairs or to the basement to pick up another floor’s worth of dirt using the same charge.

The Auto-Empty Dock Pure feature automatically empties the dirt into the dock whenever it returns to charge at the base. The auto-empty dock houses a dust bag that you’ll replace once every couple of months, depending on how dirty things are around the house. There’s an extra dust bag included in the box and you can pick up a three-pack from Roborock for $19.

The Q7 Max+ mopping system employs an electric pump to provide for 30 different water flows which can be optimized for various floor types. I’ve found it does a great job of cleaning basic spills and messes but it’s not quite like what you get from a sonic mop.

Roborock advises the Q7 Max+ can tackle upwards of 2,600 square feet on a single charge but I’ll never come near that with just mopping. On the other hand, it can vacuum and mop during the same cycle so you’ll get a mixed bag of cleaning that leaves your floors free of debris, dust, dirt, and other messes.

The S7 MaxV Ultra automatically cleans its pad when returning to the dock but here it’s a manual deal. That said, if you tend to have a dirty hard floor surface, you may find the mop pad needs cleaned fairly often.

In addition to more dust bags I would have liked for the robot vacuum to have included an extra mopping pad. Even one extra pad would be great so that you can swap in the clean one and wash the other at your leisure.

Roborock offers a two-pack of mopping pads for $17 on its website so I might advise grabbing one of those just to have on standby. Similarly, you can also pick up a two-pack of spare side brushes for $16 there, too. Given these prices I would have liked for Roborock to toss in an extra set of each.

Although the Q-Series is the more affordable line of Roborock robot vacuum cleaners, the Q7 Max+ still commands a $650 asking price. It’s a fair price, and a few hundred dollars less than the S-Series, but it’s not “budget” money.

While I found the Q7 Max+ to be a great unit and lower-price alternative to the S7 MaxV Ultra, I would have liked to see one extra set of replacement accessories tossed in the box. That, or shave about fifty bucks off the price. Or, why not just round it down to $800 even while we’re at it?

As of right now you can pick this one up for $650 from Roborock’s website or apply a $220 coupon at Amazon to get the same price. This is an incredible bargain if you ask me so definitely take advantage of it if you’re on the fence.

There are plenty of models to choose from in the Roborock portfolio with prices for most budgets. I’ve been a fan of the brand for a few years and am happy to recommend it to others.