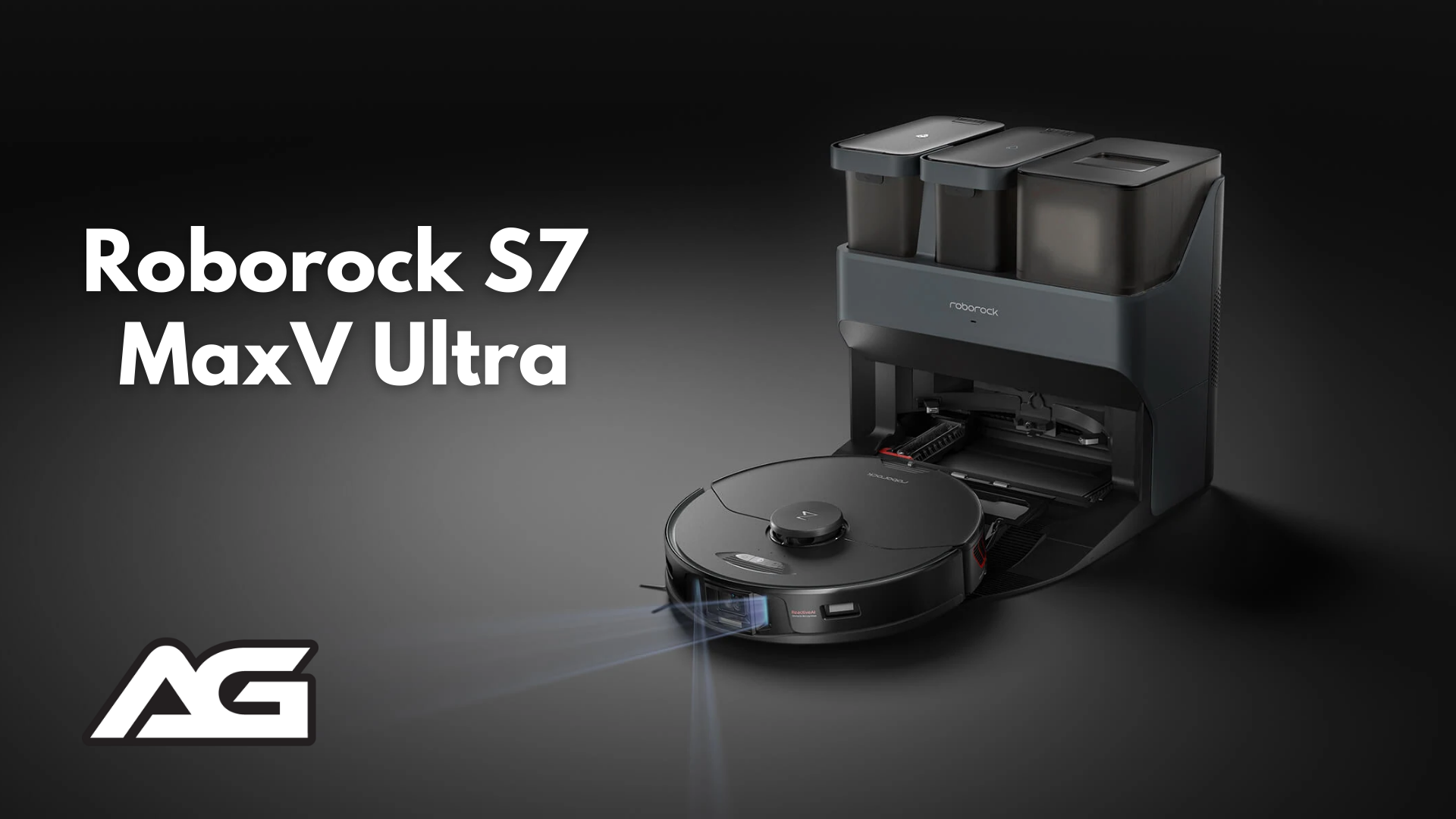 The concept of a robot vacuum is no longer foreign as most people have either seen one in use or have one at home. If you own one, you know how nice it is to have an extra helper around the house.

Whether it’s a scheduled sweep of the floor or a random spot clean, a robot vacuum can be a handy assistant. But if we’re honest with ourselves, it’s truly something we can live without. In fact, up until around a decade ago, we did.

As the prices of robot vacuums drop, and the technology continues to improve, it’s becoming more difficult to say no to having one. A few hundred bucks can go a long way to providing peace of mind and a cleaner living environment.

What about one that runs about $1,400? Surely, that’s just way too much to consider, right? As it turns out, I cannot immediately rule something like that out. The Roborock S7 MaxV Ultra, introduced at CES in January 2022, really makes a strong case for itself.

There are a number of features in the Roborock S7 MaxV Ultra that help it stand out from the increasingly crowded space. For starters, it works as both a vacuum cleaner and a mop. And it does a fantastic job at both functions, one that bests other models I’ve had in my home.

The Roborock S7 MaxV Ultra can also empty itself into a bin when it’s done running, and then refill its own water tank. Should one use the mop they’ll find it also dumps the dirty water, refills with clean water, and also cleans the mop head in the process.

The vacuum is also terrific at understanding and avoiding obstacles. Whether it’s a pair of shoes dropped on the floor in a random spot, or a pet toy that didn’t find its way back to the box, the Roborock S7 MaxV Ultra can figure these out and move around them. What’s more, it is a forgiving unit that doesn’t remap the floor as if these obstacles are permanent fixtures.

If you’re like me, setting a robot vacuum to automatically run at night can sometimes present problems. Did I walk around and pick up all of the cables, toys, and pillows that might have fallen on the floor? If no, my vacuum would usually throw a minor tantrum or “teach” itself to avoid the spots in the future.

The Roborock S7 MaxV Ultra, however, asks you whether you have pets when setting things up. You can actually tell the unit as to how forgiving it needs to be. That is to say you can trade off temporary obstacles for deeper cleaning.

The setup process is rather interesting in that it can get a good look at the house, piece together a map, and make suggestions on rooms or areas. You can, of course, merge spots together, split a room up, create “no go” zones, and more.

The Roborock S7 MaxV Ultra is able to detect furniture and other items, placing them on a map and listing a percentage of confidence in what it sees. A row of shoes, for instance, was found on the first run in my home and the vacuum knew what it was looking at with 87% certainty.

The next time I ran it, the S7 MaxV went through this space as if they didn’t exist, yet still managed to treat the walls and other obstacles as if they were permanent. Roborock calls this tech the “ReactiveAI 2.0 Obstacle Avoidance System.”

It might detect a couch which may actually be a bed, but you can change that in the map. You’ll find after a time or two that it knows what types of things are in what types of rooms, and treat them accordingly.

Have a room that’s partially carpeted or with a rug on a hard surface? The Roborock S7 MaxV Ultra knows the difference, maps it accordingly, and can switch between mopping and vacuuming on the fly.

One of the first generations of robot vacuums that I owned was an early Samsung that didn’t quite understand what steps were or how to stop at the top of a set. I learned (nearly) the hard way that it was going to tumble down a set of steps because the door to the basement was open when I ran it.

How does the Roborock S7 MaxV Ultra handle such a situation? With flying colors. Not only does it know how to stop and turn at the top of stairs, it can be taught to map four floors in a home. Yes, you can take it upstairs and run it just like you would downstairs because it treats it as a totally different map. This simply wasn’t possible in earlier robot vacuum cleaners.

At one time I had pondered the notion of buying an “upstairs” vacuum and a main floor one. Sure, a basement one would have been cool and all, but would I really want to own three of those things? Suffice it to say, the Roborock S7 MaxV Ultra is three of those things, with room for more.

Have you ever wanted to see what your robot vacuum sees? It’s possible here, and there’s even an option for two-way communication with it. Yes, you can run the vacuum remotely and talk with someone who happens to be in the home. I don’t use this feature very much, if at all. In fact, it’s only ever been used as part of a demonstration of what it can do.

I’ve had the S7 MaxV running for a few weeks now and I’ve yet to clean the bag out in the base’s dust bin. It’s a similar situation for mopping; I’ve dumped and refilled the water bins just twice but I’ve run the vacuum a little more than normal. I don’t notice any odor in the dirty water but we also tend to mop rooms manually, too.

The built-in 5200mAh battery provides around three hours of runtime, according to Roborock. I’m fairly sure this is an accurate number but I’ve never had to run it continuously. After about 25 minutes of running around the main floor, it tends to head back to the base with around 65-70% of the charge remaining. It should take around 5-6 hours to fully charge up if you’re completely empty.

With 5100pa of suction power, the vacuum seems to pick up things that other models might have otherwise missed. I am always surprised by the amount of dirt that comes from a robot unit and the S7 does a great job of picking up the tiniest of debris and dust as well as the random tiny pebbles, plastic, food scraps, etc.

When it comes to cleaning the mop head or emptying the dustbin things can get a little loud. To that end, you can set up quiet times so that it doesn’t wake people or disturb an otherwise peaceful setting. For example, after 8PM doesn’t bother with emptying the contents into the dock’s bag. On the other end of the spectrum, you can also manually empty the vacuum on demand.

At just under 4-inches, the S7 MaxV Ultra is able to slide under my couch, loveseat, and chairs. It’s a touch wider than other models at around 14 inches, but it’s nimble enough to navigate around the legs of a kitchen chair without taking much time.

While the vacuum is able to adjust itself for varying heights of carpet, I did run into one issue with a shaggy rug. I was 90% sure it was going to be a problem for the rubber brush that sweeps things under the vacuum so I was not upset. Once the S7 was back to the base I simply created a no-go box around the area and it stayed away.

As a person with a house full of Google Assistant speakers and displays, I appreciate when I can use voice to start and stop things. Indeed, not only can you run the vacuum on command, you can even tell it to clean specific rooms.

I’ve tested out the last three generations of Roborock vacuums and each seems to be a bit better than the predecessor. I really like what the brand puts forth and think the S7 MaxV is its best yet.

Do you need the Roborock S7 MaxV Ultra? Absolutely not. Would it be nice to have one? Without question. It’s up to you to figure out where you fall in the middle of those two.

If you tend to have floors without any clutter or random mess, I would suggest the S7 Plus, especially if you don’t have a need for mopping. For $950 you get the robot vacuum and Auto Empty Dock.

The Roborock S7 MaxV is priced $860 for the robot vacuum by itself and $1,400 for the S7 MaxV Ultra package. Going the Ultra route adds the Empty Wash Fill dock, which arrives in early May. For what it’s worth, I understand the S7 MaxV also works with Roborock’s Auto Empty Dock which comes in at a combined price of $1,160. You can also buy the Empty Wash Fill Dock for $600 and the Auto-Empty Dock for $300, too.

Admittedly, these don’t come cheaply, and it’s a big ask for people to spend that sort of money. But, given Roborock’s flexibility and compatibility, I like that the docks don’t seem to be one-off models for each generation. That is to say you’ll be able to hold onto these and use them long term.

Regardless of where you jump in, and independent of any docks, I have no reservations in recommending the Roborock brand. But if you can swing it, you’ll be pleased with the S7 MaxV Ultra.