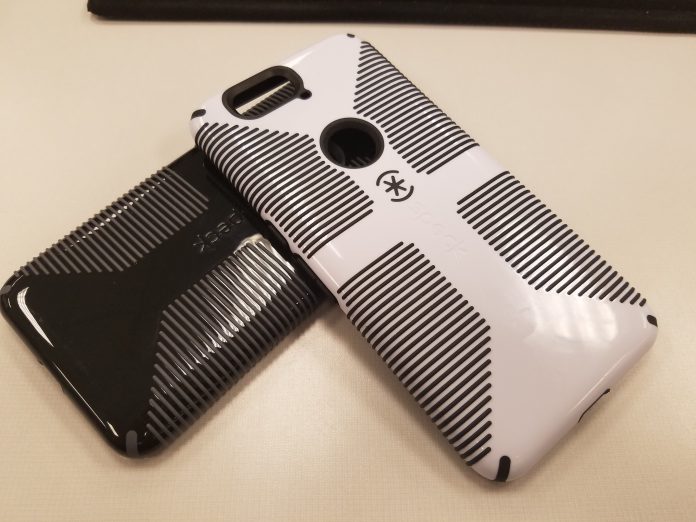 Here at AndroidGuys, we love phone accessories. Cases are the most popular type of phone accessory, everyone seems to have one! Today we’re going to be taking a look at the product lineup from one of the biggest brands in the world, Speck! It’s been gracious enough to send over some of its Nexus 6P cases, so let’s get to it!

The CandyShell Grip case from Speck is one of the most recognizable phone accessories out there. The raised ridges meet a hard, military grade case. The CandyShell Grip meets or exceeds military standard MIL-STD-810G drop tests to keep your phone safe from drops and falls.

I’m especially struck by the white case with black ridges. The contrast, especially on the black Nexus 6P just looks wonderful. The cutouts for the camera, fingerprint sensor, USB type-C port, headphone jack, and microphone are all nice and large to allow use of third party accessories. Nothing is worse than not being able to use your nice headphones because the case interferes.

While Speck does its best to make this a thin case, it does feel a bit bulky. Part of this is because of the ridges. The case itself isn’t very thick, but the ridges add just enough to make a big phone feel even bigger. This isn’t a huge case like an Otterbox or something, but it definitely doesn’t feel thin. The Nexus 6P is already a big phone so it’s very noticeable when you add bulk to it.

But, the ridges aren’t all bad. Boy, do they add grip! The Nexus 6P has never been easier to hold as when I have it in the CandyShell grip case. And, if I do drop it, the extra bumpers on the corners of the case help keep my Nexus 6P from absorbing the impact.

The buttons are an area where the CandyShell Grip case shines. The buttons are big and extend long enough to find easily, while providing good travel. They don’t feel mushy as case’s buttons tend to do. I wouldn’t mind if there was some way to differentiate between the volume and power buttons since they’re on the same side, but that’s my only complaint.

Speck is one of the biggest names in case, and its legacy remains safe in the CandyShell Grip line. These beautiful cases do feel a bit thick, but the advantages outnumber the small disadvantages. I love how secure my the phone feels in my hand with the added grip, and I have no doubt that the raised lip over the front will help out in case of falls.

If you’re interested in picking up any of Speck’s cases, you can check them out at Amazon, Best Buy, and Speck’s website