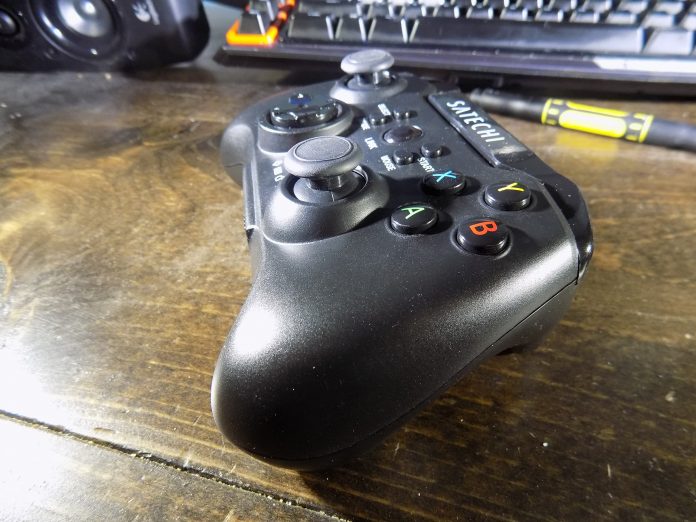 I have a shocking confession. I don’t play mobile games. I think it’s mostly for the same reasons I play very few games on my desktop. I grew up playing games on a console with a controller sitting on my couch. It’s what I’m used to. I don’t like tapping a screen repeatedly or using virtual buttons. It’s just not a rewarding experience.

But, I really want to like mobile gaming. I love Pokemon, and while I’m not as obsessed with it as I used to be as a kid, I love to sit down and bust out some game time and relax. Now with the combination of Satechi’s Bluetooth Wireless Game Controller and apps from the Play Store, I can easily catch up on some of my favorite games and explore new ones.

The Game Controller looks almost identical to an Xbox One controller. The joystick, D-Pad, bumpers, and button placement are all identical. In the center of the controller, you’ll find five buttons: Link, Select, Mode, Start, and Mouse.

The bottom of the controller you’ll find a micro-USB port to charge the internal 220 mAh battery and a power switch you slide left to right to turn the controller on and off. Luckily, there are some power-saving features if you forget to turn your controller off. 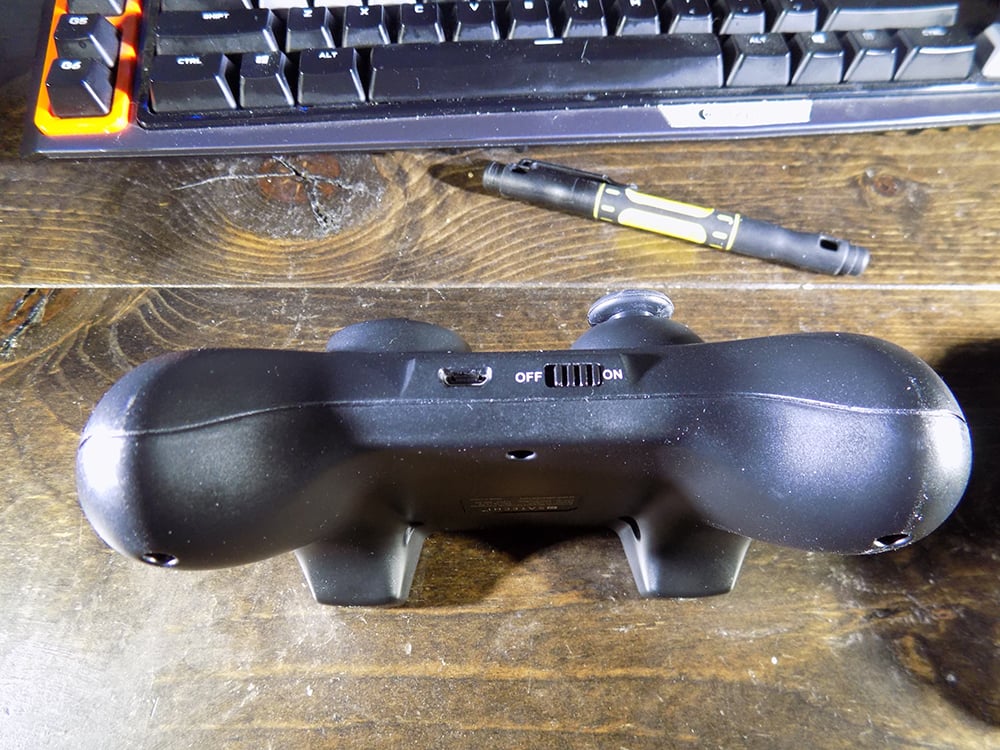 One of the best innovations in the Satechi Bluetooth Wireless Game Controller comes in the way of a mount that pulls up from the top of the controller. It’s spring loaded so it will stay closed until you extend it and place your phone in it. Due to the spring, your phone stays securely attached inside the gamepad. The opening gets just big enough for my Nexus 6P (3.06 inches) with a slim case on it. With a slightly thicker Speck case, my Nexus won’t fit at all. 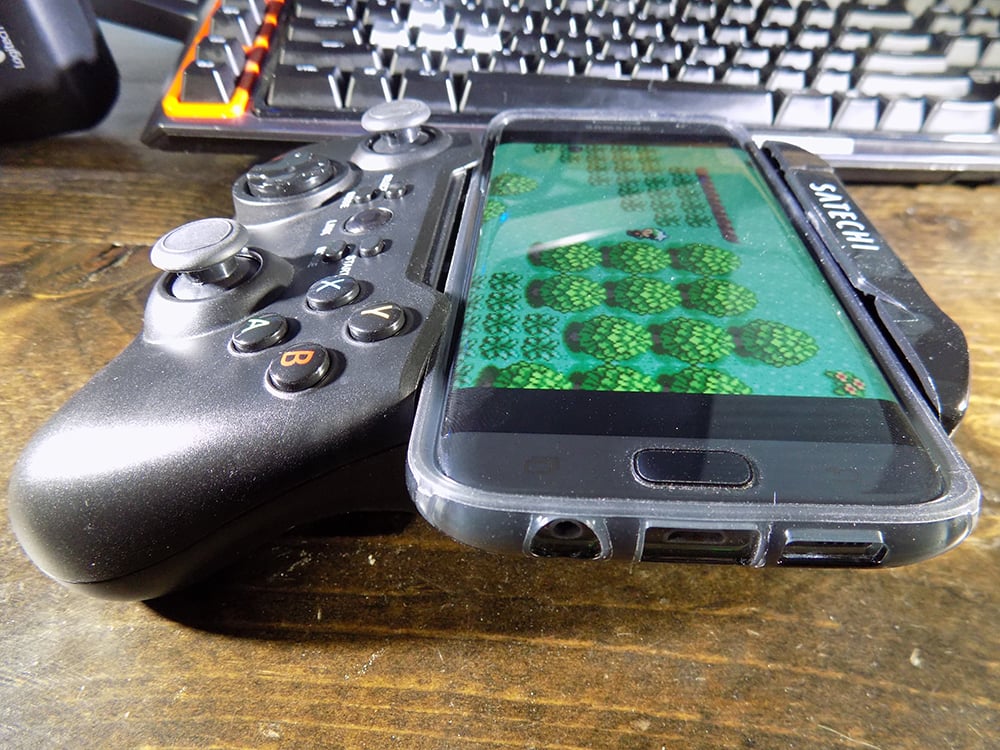 I’d really suggest using a case with your phone placed in the controller. The controller is made of hard plastic, so if your phone is moving around much, there’s definitely a risk it could scrape the paint of an aluminum phone or scratch a glass body. There’s also an issue of the arm squeezing the phone hard enough to press the volume and power buttons depending on placement. A case alleviated these issues on both the Nexus 6P and Samsung Galaxy S7 Edge.

I wish I could say that Satechi knocked it out of the park with its buttons and sticks, but I do find some issues here. I will again be comparing the controller to an Xbox One controller, as that is obviously what Satechi based its design upon. 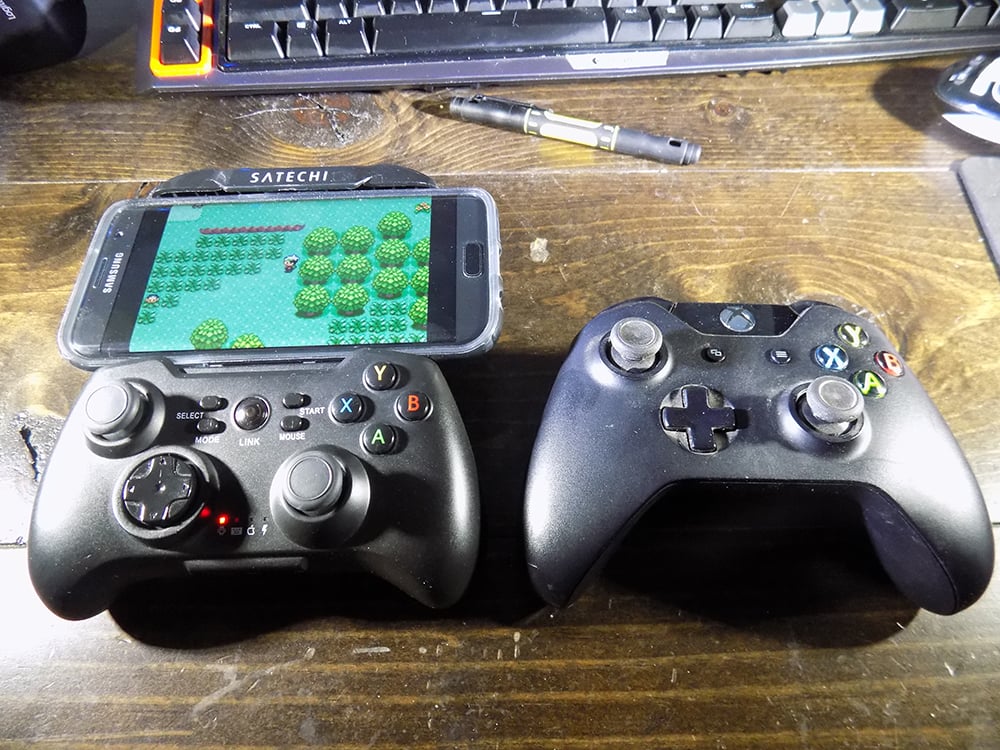 First off, let’s address the joysticks. The button placement, length, and width are almost identical in every way to the Xbox controller. They extend only slightly less (millimeters) from the gamepad than the Xbox controller and the surface is almost the exact same width.

Where they differ is the design on top of the joystick. The Xbox One controller has a concave design to cradle your thumb, Satechi, however, went with a flat design. This certainly leads to more thumb slipping while playing games, especially because of how stiff the sticks are. They can be a bit of a pain to move. I don’t have any doubt that due to their solid construction, these sticks will hold up over time.

The D-Pad is a bit of a mushy mess. There’s no tactile click to indicate when you’ve activated the press, you just bottom out. If the Xbox controller can be compared to a Cherry MX Blue switch on a mechanical keyboard, the Satechi Wireless Gamepad would feel much closer to the Dell keyboard that came with your pre-built desktop. Running around in Pokemon was a bit of an adventure because I never knew which way I was actually going to go unless I was looking at what I pressed. 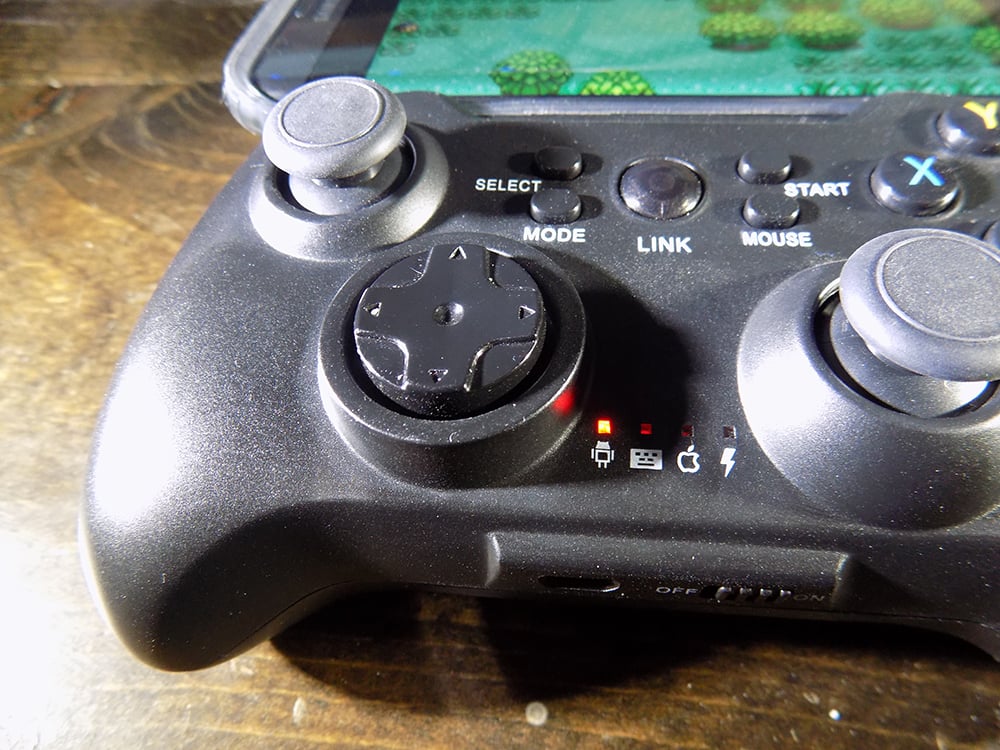 The A, B, X, and Y buttons are a different story altogether. They feel nice to press like the glassy/plastic buttons on the Xbox controller. There’s no stiffness in these buttons and they’re easy to bottom out. The buttons share the same layout and color combination with the Xbox controller so there will be no confusion if you’re already used to one. 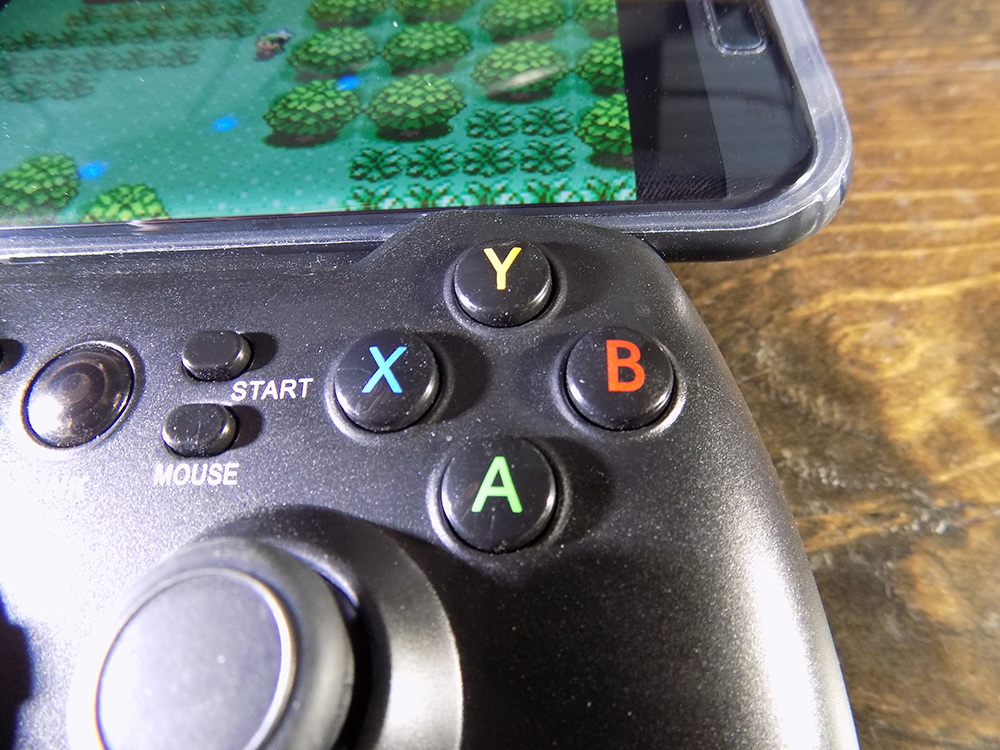 The five buttons located in the center of the controller are all fine. They offer no resistance and feel exactly like you’d expect them to.

I have to give Satechi very high marks on how easy it was to pair the Wireless Gamepad to my phone. It took me about 13 seconds to open the Bluetooth settings on my phone, press the link button and tap the “ST-UBGC” listing. It paired instantly with no issues.

After pairing, I opened up the Gameboy Advanced emulator I use and entered settings. From the input menu, I selected the input method and chose the controller as an external keyboard. Everything worked perfectly from then on.

There is no software to control the gamepad, but most emulators or games that support gamepads will allow you to rebind keys.

As I said earlier, the D-Pad is a bit mushy and the joysticks are a bit stiff which interfere with gameplay a bit, but once you get used to them, you’re good to go. Gaming is responsive and free of any Bluetooth lag.

Where the sticks will really cause you issues is if you’re playing any kind of first person shooter games. It will NOT be easy to aim. I hope the sticks loosen up in time, but as of this review, they haven’t yet.

I love the world of gaming that the Satechi Wireless Bluetooth Gamepad has now opened up for me. My wife, however, is going to hate me mirroring Pokemon (or any other game) to our television with screen sharing and Chromecast, but, I get to play Pokemon in 65 glorious inches so I’ll deal with the flak.

There are certainly improvements that Satechi can make in a hardware revision, but I do believe that the gamepad is perfectly usable in its current state (but, it could get better). You can grab one from Amazon for only $30 with Prime shipping!

ARCHEER VR Headset for smartphones up to 6.5″: A solid alternative to Google Cardboard (review)