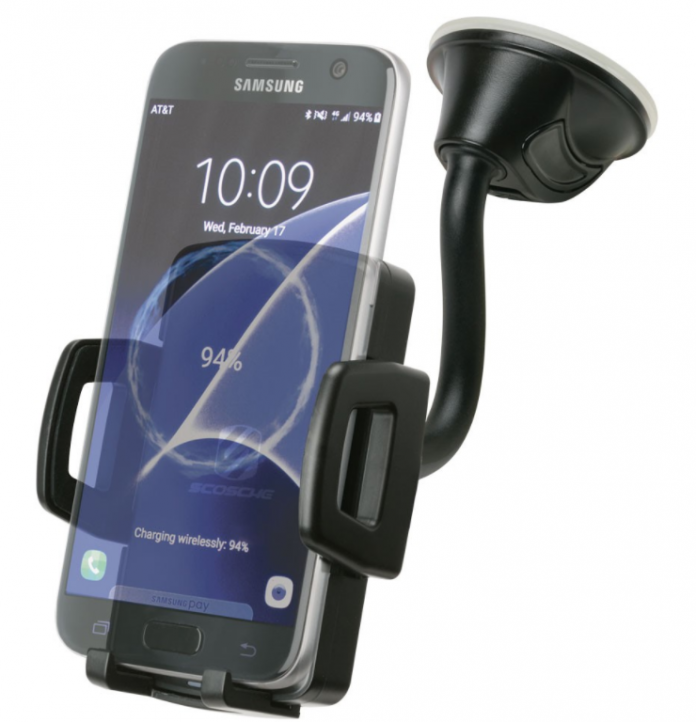 Although most smartphones don’t support wireless charging, the idea is a novel one that offers a bit of ease at some additional cost. Samsung has gone full bore into the wireless charging world by offering the feature on all of its flagship phones. There are a few other devices from Microsoft, Sony, Google and Motorola that also employ wireless capabilities–so it’s not just Samsung here.

Although the majority of smartphones don’t have wireless charging, that doesn’t mean there isn’t a market for wireless chargers. With multiple manufacturers providing a handful of devices with Qi (pronounced ‘che’) wireless capabilities, the Scosche Wireless Charging Mount offers a great solution for those don’t want to bother plugging in to charge.

Inside the box and assembly

Scosche includes a good deal of components here–everything you need to mount and charge wirelessly. Upon opening the box you’ll find the charging base, the charging USB cable, the suction mount, and the separate 12V power adapter that plugs into the car socket. Each item feels durable and well designed. These are not components that you’d find in a budget bin at your local department store. Also included is a simple multi-language instruction booklet made of folded paper in case the simple assembly isn’t quite clear.

Using the charger and mount

Assembly is thankfully simple and straightforward. I was able to get all pieces connected and working within minutes. Plugging in the adapter and inserting the USB cable in properly is something we’ve all done a thousand times; this is not rocket science by any means. The mount locks into the adjustable arm with a simple click, then you’re all set to charge your device wirelessly. Having a quick and understandable assembly process goes a long way here.

Mounting the device to the dash of a vehicle takes some patience. I discovered that the suction mount didn’t adhere well to the plastic parts of my dash at first. I had to fully clean the mounting location as well as readjust the suction cup to assure the mount was firmly in place. Previous to doing so, the entire assembly detached once, which sent my phone tumbling to the floor.

Mounting to my windshield was much more stable, however, locating a spot on my windshield that didn’t obstruct my view was a bit tricky. This is nearly impossible and would be a red flag for getting pulled over, but to be fair, the same would apply to almost any windshield-style mount. I found that the mount stayed firmly attached to the windshield at all times and the included release stem worked perfectly for removal.

Once mounted, I was able to easily set and remove my smartphone from the charging cradle. The charging indicator on the front changes from blue to green to show that it’s charging, but is sometimes not visible depending on the size of the device being charged as well as the angle of the mount. At the bottom of the device, two adjustable clips keep the phone from slipping out. A button on the back side of the cradle allows these clips to slide down, which was necessary for my S7 Edge and S8 Plus to activate the wireless charger.

Scosche has been around in the mobile devices field for quite some time now and they’ve always made quality products. I was pleased to see the track record remains with the StuckUp Qi Wireless Charging Mount. This product charges quickly and holds firmly while not being overly complicated to assemble or use.

I honestly can’t speak for, nor guarantee, that every wireless device will be compatible, but considering Qi is quite universal, I can’t imagine any problems arising with other devices. Scosche has constructed a universal charger that has only a few minor shortcomings. It’s still a great value and one I can recommend to anybody that needs a wireless charging mount.