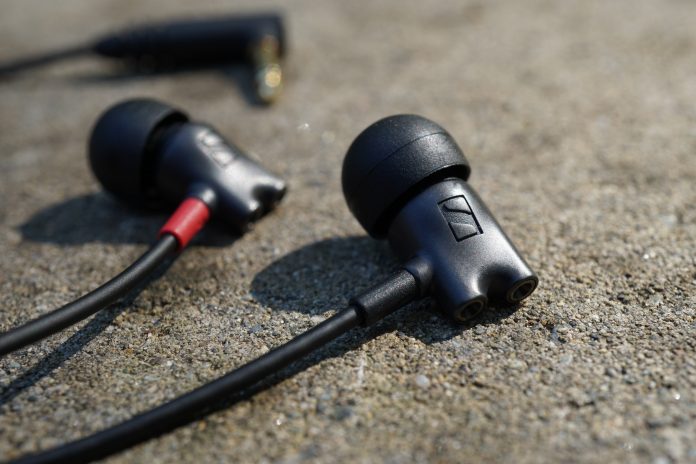 It’s been a couple years since we’ve looked at the best from Sennheiser with regard to in-ear headphones. The petite IE 800 were an original take on a high-end earphone, deviating from the current trend over-the-ear design and multi-driver configurations. It was surely understated, but the attention to detail is what set it apart, from the elegant, ceramic casing to the super crisp sound.

Well, it’s about that time for a successor, and Sennheiser has debuted it in the form of a IE 800 S. Following in the footsteps of Apple’s naming convention, the “S” means that we’re looking at a refresh of the original flagship rather than something really new. And naturally, that begs to question: Are the tweaks worthy? It’s crucial to note that this update pushes the price back up to the original $999. Let’s find out. 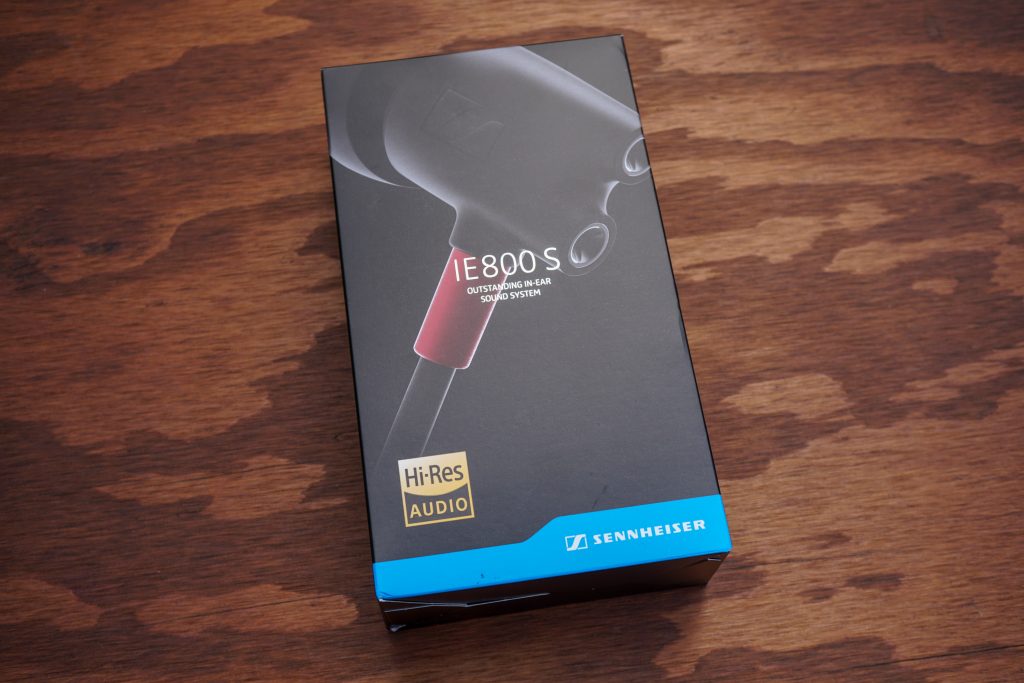 As expected, we’re presented with a very similar form and design as before. That is, tiny tapered earpieces with stubby nozzles and unique dual bass exhaust ports at the rear. Nothing has changed with regard to mechanics. To the disappointment of many, the cable still isn’t removable from the earpieces (which is often a feature in higher-end earphones). You still have that interesting break on the cable’s Y-split, where it detaches via a 2.5mm jack. However, this time, that feature is more functional.

Sennheiser updated the wiring so that the new headphone can be used with Balanced output. And what’s more, the Balance cable isn’t an extra purchase. Sennheiser includes two common standards in the box: 2.5mm (TRRS) and 4.4mm (Pentacon) terminations. The cable detachment now serves as a cleverly quick way to switch cable types.

Styling has been given an impactful update, for better or worse. Starting with the earpieces, they’re still made out of durable ceramic, but with now a matte finish instead of glossy. We usually agree with this kind of move. Glossy typically invokes a cheap feel. However, coupled with the ceramic, it gave the original IE 800 a luxurious sense. The new matte finish moves to “understated”, but at a close look, you can see a high quality sheen to it. And we can’t ignore the practically of it. The earpieces aren’t nearly as slippery as before, and fingerprints are no longer a bother either.

The cable got a similar makeover. Instead of the textured, green accented styling from before, the IE 800 S comprehensively pushes the stealthy aesthetic with a more understated, basic smooth black sheathing. Again, it feels higher quality than the standard rubbery plastic used on most earphones, but we can’t ignore how basic it looks for such an expensive unit. We prefer the unique look of the original.

The box contents with the new IE 800 S have minimally changed from before, Such is the case with the design of the leather case, to our dismay. It’s unnecessarily large (relative to the size of the earphones), and you have to wrap the cord around the sides to utilize it.

A positive is that Sennheiser is now offering a set of foam ear tips (customly made by Comply). Those take place of the oval silicone tips that have quietly disappeared for an unknown reason. Then there’s the new inclusion of two types of Balanced cables that we’ve discussed.

As far as we can tell, Sennheiser hasn’t messed with the shape, angle, or size of the earpieces, so ergonomic-wise, the fit experience is just like I’ve seen with the IE 800. 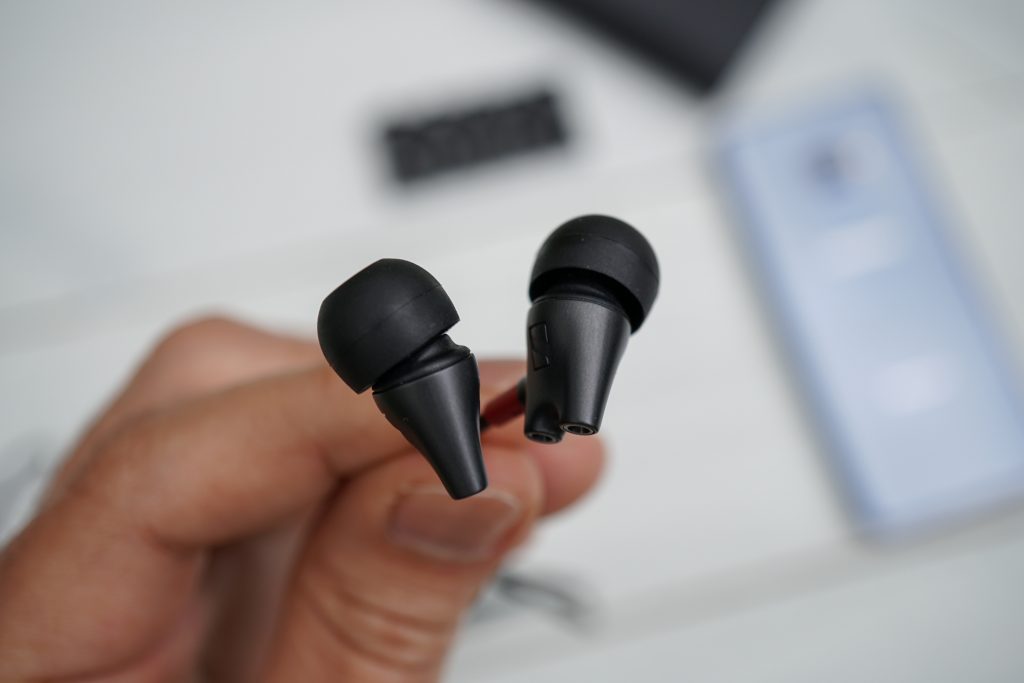 Their compactness results in a deep insertion. The tips (standard silicone ones) are firm but plenty mold-able. A seal is no problem in my case, but it isn’t the most secure you’ll find. On that subject, we still wouldn’t recommend these for working out, not just because of the delicate fit but also because microphonics noise is still a concern when the cable rubs against you with movement. This is a headphone for sitting still and listening. 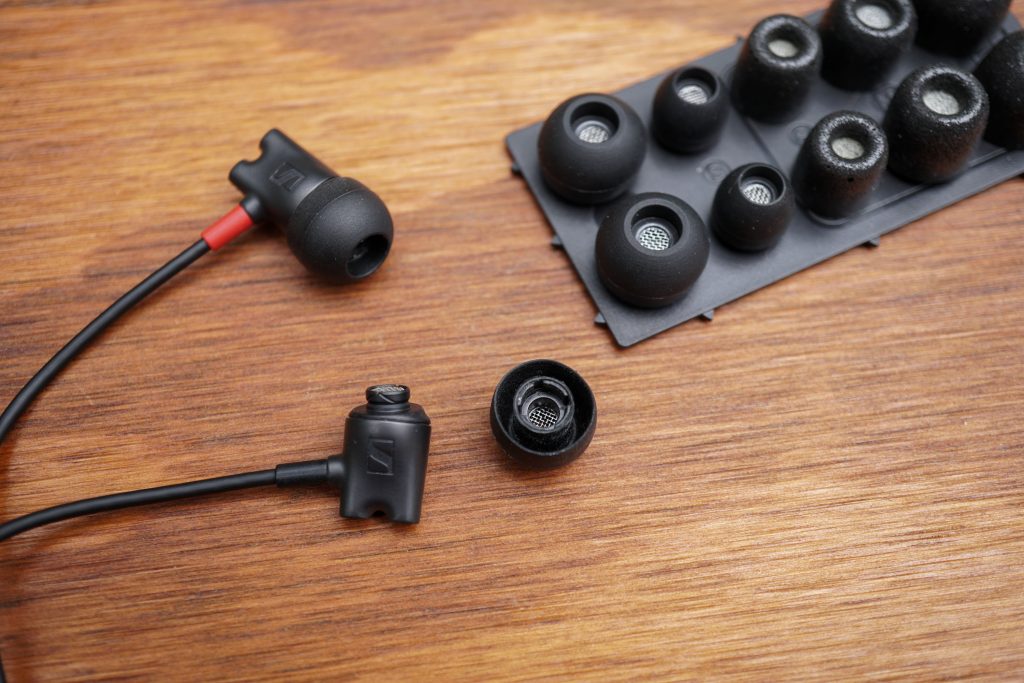 Not all of the gripes from before have gone unaddressed. Many users disliked the short length of the cable. Sennheiser listened and added a little length.

I adored the sound of the original IE 800. Its sub-bass was captivating and treble detail/extension was extraordinary. Sennheiser also has this skillful cleanness and clarity unaccomplished by many. But not everything in its reproduction was as brilliant. Namely, it was lacking a bit too much energy in the mid-range, and thus, some of that pleasurable fullness found in some of the competition.

This is one of the qualities I can hear that Sennheiser tweaked in the IE 800 S. Mind you, it’s not a big change. Nothing with the IE 800 S is a big change, just refinements. In other words, if you’re pondering the upgrade, know that this is still very much a IE 800 sound. It’ll be the same experience for the most part.

So where the original IE 800’s frequency response could be deem V-shaped, Sennheiser pushed the mids up to what could be considered U-shaped. It doesn’t sound like much, but is an impactful difference. Vocals, in particular, have more breathing room (rather than being pressed down). It also adds a touch of musicality and fullness that the drivers’ excellent dynamics benefit from. That said, the update doesn’t get the mids even near the rockin’ level of the SE846.

Sennheiser also made tweaks to the sub-bass and treble regions. In contrast to the mids, these changes brought more control to the strongest areas of the IE 800’s sound. Some users found the past sub-bass to be a tad overbearing. Likewise, while the treble output was magnificently detailed and crisp, it could be fatiguing.

The result of taming these regions is an easier listen, while still being able to pick up the high-caliber acoustics. However, on the same token, these critical details aren’t as catching and distinct as they previously were, taking away from the “specialness” of the output. That aspect is important when considering how much you’re paying.

The IE 800 S sounds more “ordinary” in comparison to its predecessor, and it’s harder to make out the benefit of the high cost. It’s totally a game of give and take. It’s apparent that Sennheiser is trying to even out the frequency response for the sake of trueness. The better approach may come down to preference.

All-in-all, the IE 800 S is still a masterful in-ear solution. Articulation and clarity are first-rate. It’ll be hard to go back to ordinary earphones after this. Somehow, these little guys manage to pump out an able soundstage. It’s not the widest, but the 3D space is beautifully perceived and worked within. You’ll excellently identify varying range of depth as different notes hit. It’s still amazes me what these little earpieces can do, with their tiny drivers. The IE 800 S’s output can still stand with today’s best.

If you’re nit-picky like I am (and I’d argue that at this price range, you’re allowed to be), you may be plentiful content with this update. My strongest point, especially for IE 800 users, is that the updated sound is more of a tweak than an upgrade. It’s totally on you if that’s worth putting down the dough for the “upgrade”. I honestly wouldn’t say so at this point in time that the originals are at half the cost.

As for interested non-IE 800 owners, I’d recommend being cautious. Get your hands on them for a test listen if at all possible. The sound quality is exquisite, no doubt, but it can be seen as an acquired taste. However, if you’re someone that can appreciate qualities like clarity and detail more than energy and booming bass, then you may recognize the magic within. And once you do, you’ll be hooked.