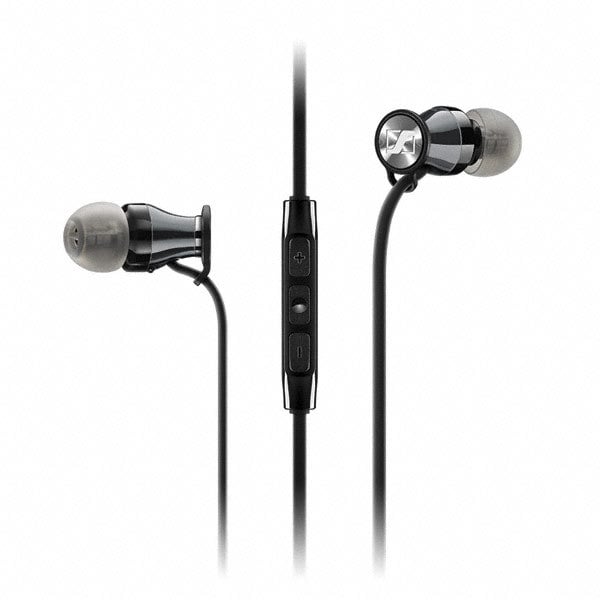 Chances are that if you know a thing or two about audio gear, you’ve heard of Sennheiser. The German company began all the way back in 1945 and has created headphone legends throughout its lengthy lifetime. However, Sennheiser’s audience has traditionally been audiophiles. Despite its successful history, it still isn’t a brand that most people recognize. Part of that reason is because the mainstream market has never cared about audio quality (and the cost associated with getting top-notch tunes).

That is, until now. We’re now beginning to see consumers pay up for better quality headphones. And Sennheiser hasn’t sat back and ignored that fact. Therefore, it has recently freshened up its low and mid-range lineups with both style and what it does best – exquisite audio reproduction.

The Momentums became the face of this initiative, debuted as either over-ear or on-ear offerings. Following the success, Sennheiser eventually completed the lineup with an in-ear variant – which we have to review for you today. The Momentum In-Ear was launched in a black/red color scheme, but a black/chrome version later surfaced (which we were given). These little guys come with a bold claim – true Momentum levels of performance at only a $99 price tag. Let’s have a look and find out if they succeed.

There’s a lot to say about the design of the Momentum In-Ear. A play between metal and glossy plastic produces a striking presentation. My appreciation of a thoughtful styling is extended when considering the price tag. It’s safe to say that the look is like no other. 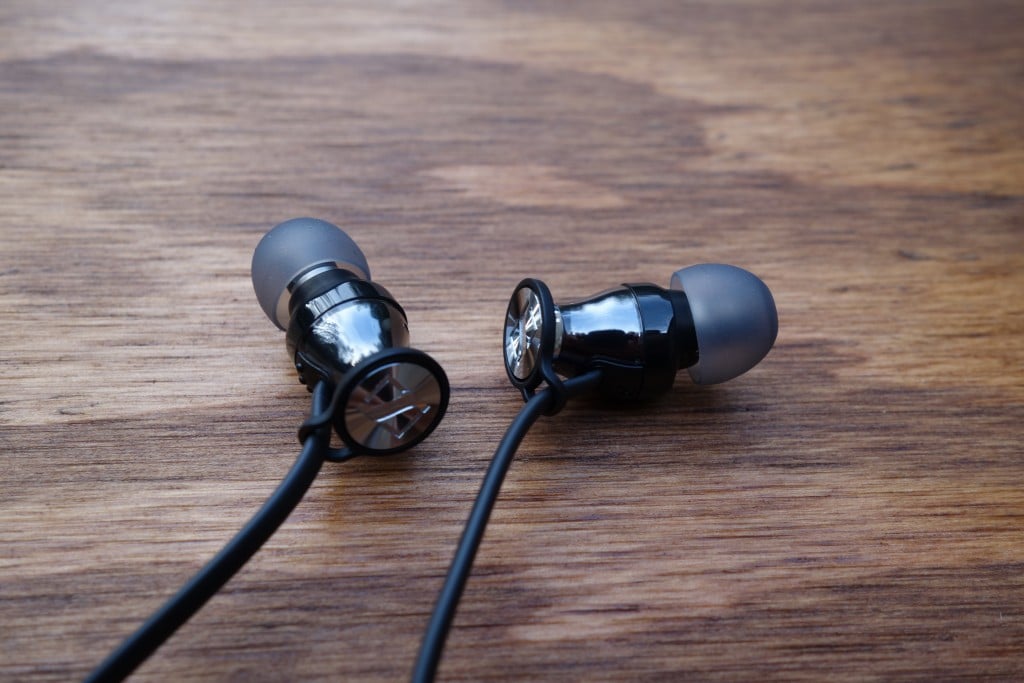 I love how the sleek, tapered shape is supplemented by a traditional Momentum design feature – the flat, metal cap on the ends of the earphones. 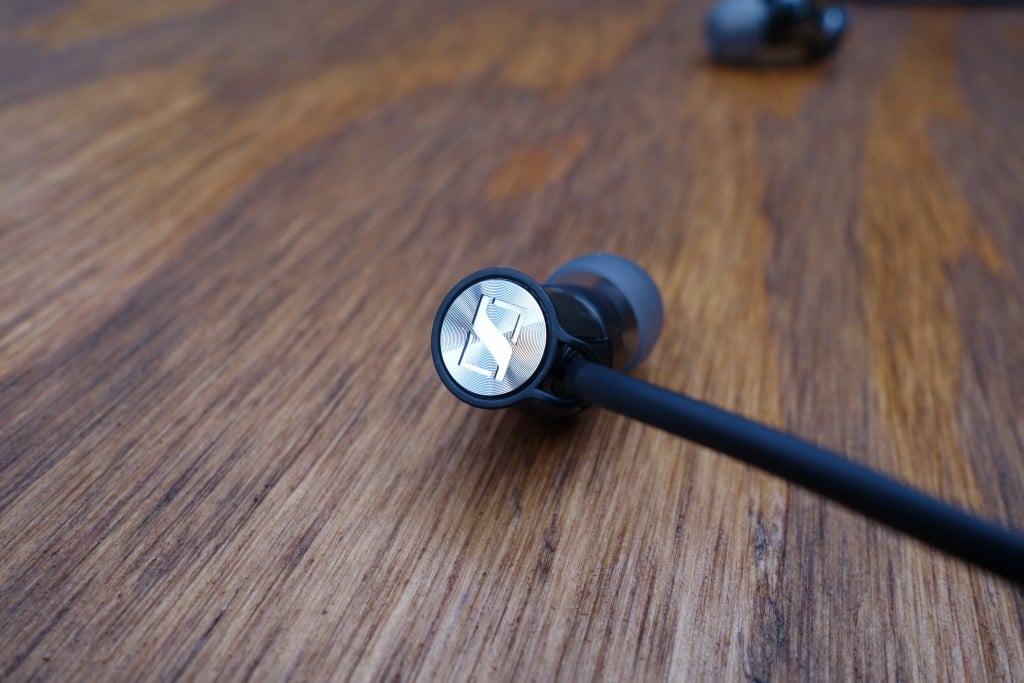 It’s hard to get cohesion between over-ears and in-ears; Sennheiser nailed the translation in my opinion. And the same sense of style that the Momentum line prides itself with is maintained.

With that said, it isn’t hard to detect the compromise in build of the Momentum In-Ear. The plastic chassis of the earpieces doesn’t necessarily feel expensive in-hand, unlike its big brother. But Sennheiser did such a good job with the aesthetics to hide that fact.

Firstly, the entire earpiece shines magnificently. The body has glossy finish with two-tone colors – black and chrome. I’ve played with the initial red/black version and find this color scheme just as special (it’d be really hard to choose if I had to).

The metallic cap is another piece of eye-candy that adds to the presentation. The metal is etched with a subtly ridged Sennheiser logo. It shimmers fantastically and the placement really makes it stand out. I also really appreciate how it reflects the Momentum’s signature look.

Cleverly, Sennheiser made the end cap functional in the design. It serves as support to counter strain on the cable’s attachment to the earpiece (a typical vulnerability with earphones). The cable rests on a notch on the bottom of the cap. It isn’t the most refined-looking cable support, but we should be able to overlook it considering the benefit. 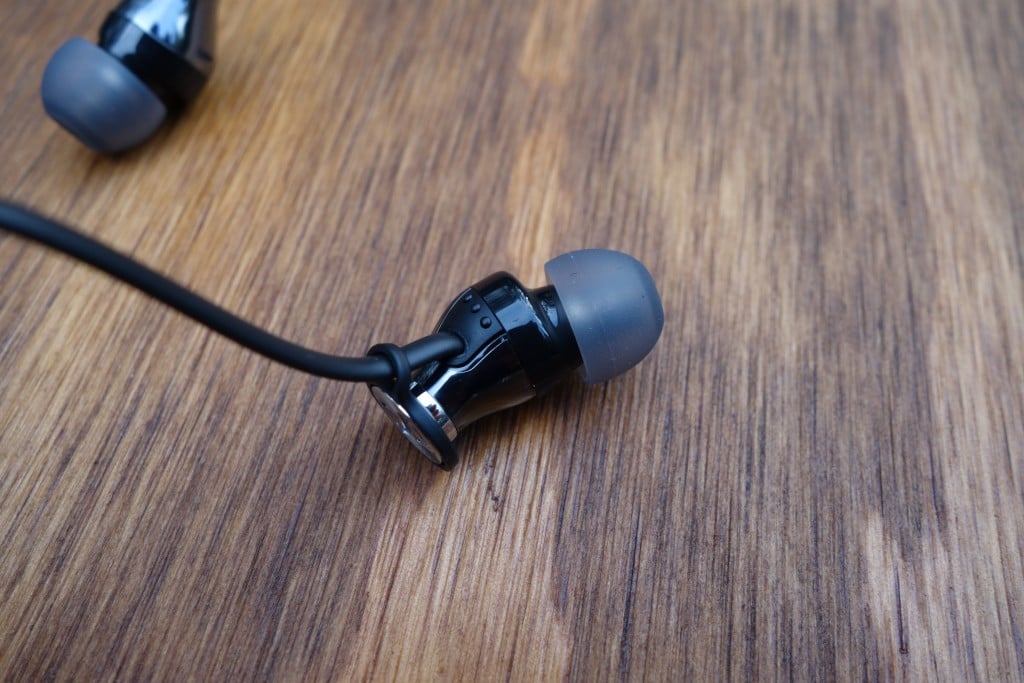 Removing the eartips reveals a metal stem with a slim nozzle. The eartips are easy to don/remove. The machined notch on the stem ensures a snug fit. 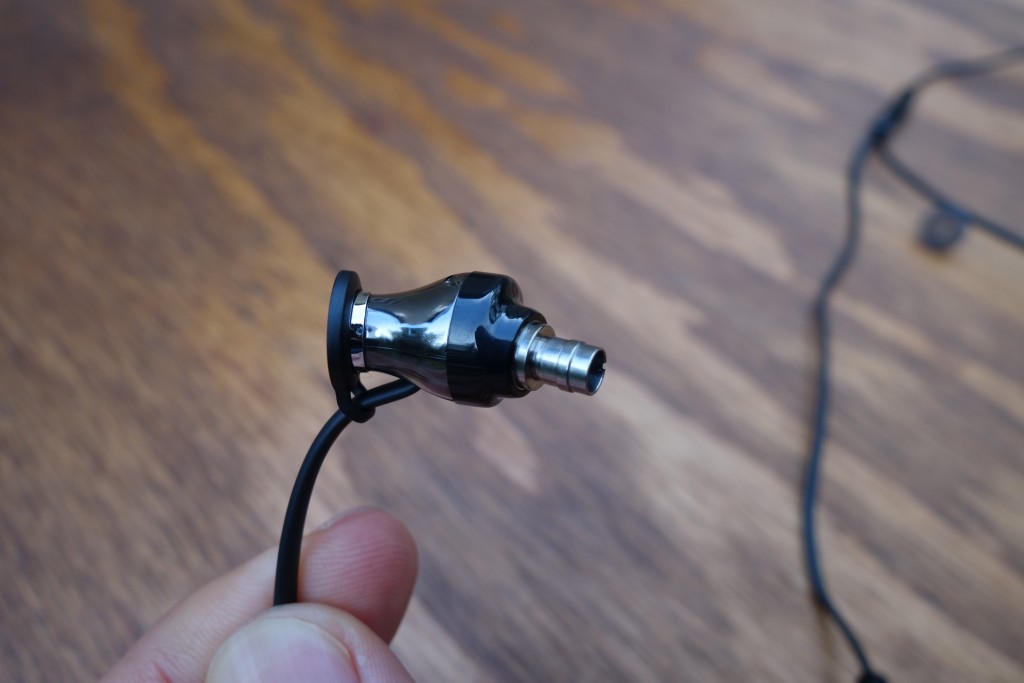 Sennheiser generously threw in a quality zipper case that I think looks great. It’s soft to the touch but feels sturdy. It is a bit large for the size of the earphones, but this is good if you carry other accessories. 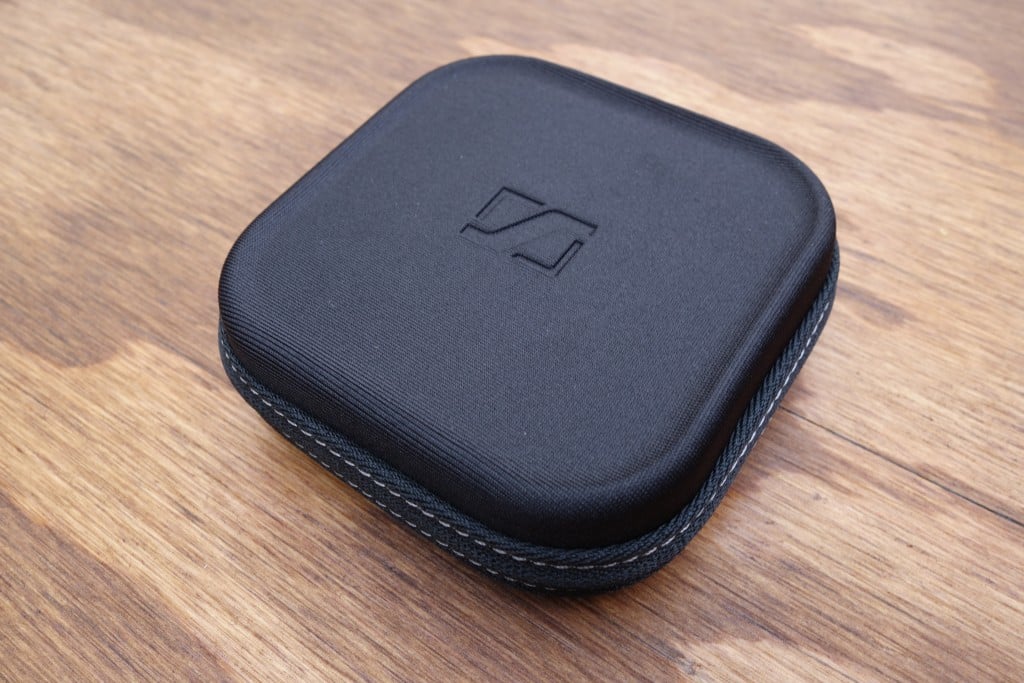 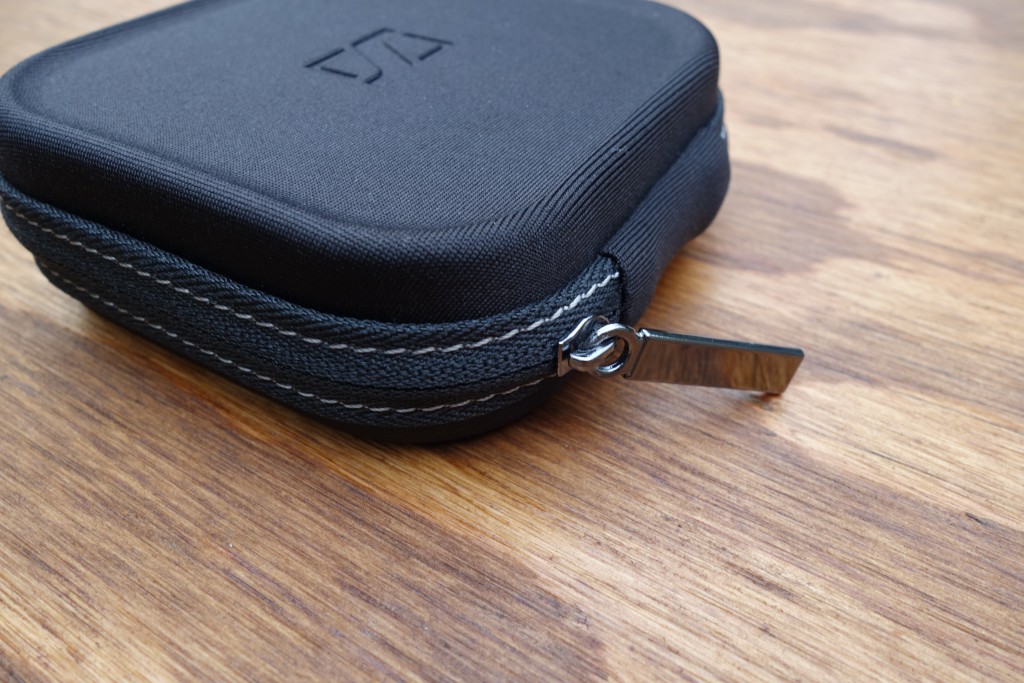 The most common concern with in-ear headphones are fit. It’s difficult to address that in a review, because everybody’s ear canal has a different shape. However, Sennheiser did a couple things with the Momentum In-Ear to help that fact. Ergonomics was thought of in the design. At a top view of the earphones, you’ll notice they’re angled. 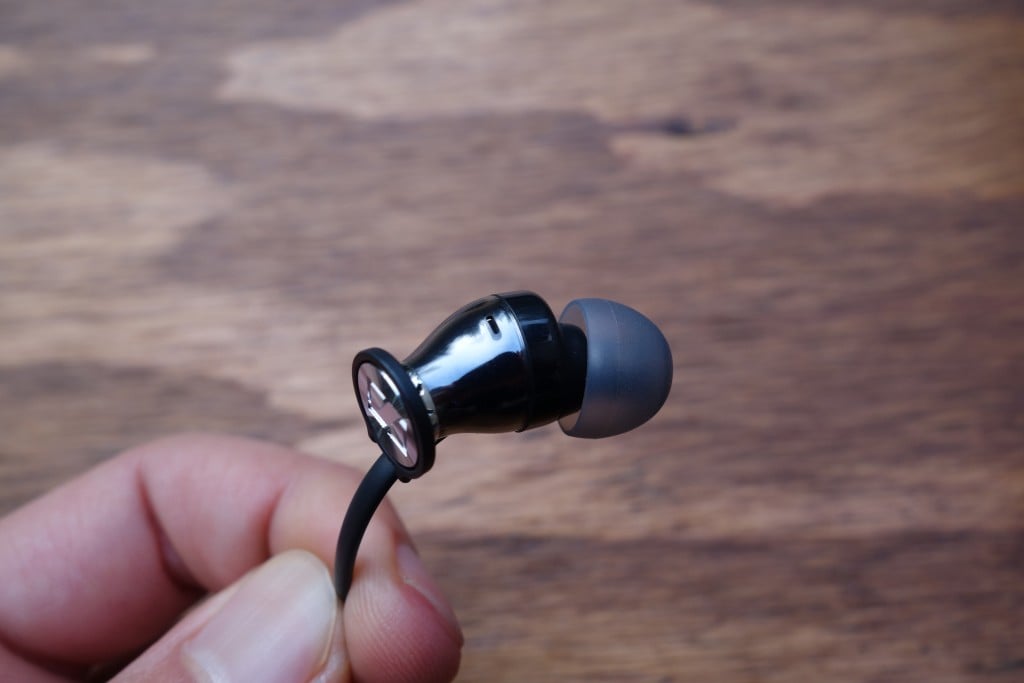 In my experience, this tremendously helps with both insertion and fit. When you consider the angle of your ear canal in reference to your ears, it just makes sense. There’s no squirming to get the earpieces in the correct orientation, they just slip with an ease that feels natural.

Sennheiser generously included four sizes of eartips, which I think is a sufficient variety to cover most users. Some manufacturers skimp on this, and if you can’t get a good seal then the purpose of the product is defeated. Personally, I have large ear canals, so it’s a pain-point for me when manufacturers don’t include a large enough eartip. To my satisfaction, Sennheiser’s largest eartip packaged with the Momentum In-Ear worked perfectly. One thing to mention about the fit is that the Momentum In-Ear aren’t the smallest earpieces out there. They do stick out of the ear somewhat, especially with that considerably sized cap at the ends of the earpiece. But I only see this mattering if you often sleep with earphones on; laying on these would not be pleasurable.

The headphone cord is also often a frustration for users, either in regard to skimped length or microphonics (noise that you can hear from the cord when it rubs against you). I’m happy to report that Sennheiser nailed it on both fronts. The cord is a generous 55″ (14″ from earpiece to y-splitter, and then 41″ to headphone jack). The cord has this smooth, rubbery finish that minimizes cord noise from ruining the audio experience. Great job here.

Above the y-splitter, there’s also a square-shaped chin slider with a Sennheiser logo. As far as features, there’s a remote located down a few inches from the right earpiece. It thankfully is not heavy; you don’t notice that it’s there. Functions on the remote are a standard affair – volume up/down and play/pause button. There’s also a microphone on the back to do calls. Be aware that the Momentum In-Ear comes in either Android or iOS versions. My review unit is the Apple version, which means that only the play/pause buttons works. The cool design continues even down to the headphone jack. It small, right-angled 3.5mm connector, with both a glossy and rubbery plastic divided by a strip of chrome. Now we arrive to the meat of the discussion – the sound quality of the Momentum In-Ear. I must first say that at a $99 target, Sennheiser gave themselves quite a challenge. While the asking price might be expensive for a lot of people, it’s not for the level of performance that the Momentum In-Ear must live up to. The sound out of the full-fledged Momentum headphones (which push $300) is exquisite.

Fortunately, what I noticed right off the bat with the Momentum In-Ear is the tonal balance. The sound signature is mostly neutral, not placing too much emphases on a particular frequency range. This is something that I loved from the original Momentums that definitely got transferred to the In-Ear. Sennheiser always aims towards perfection and that is clearly evident here.

However, I do stress that you make sure that’s what you want. A flat sound signature can come off dull to some people, especially after listening to headphones that boost bass and treble. The ear-candy is nice sometimes, but the Momentum In-Ear can surface more overall detail when you want to seriously listen to your music.

Another big positive of the Momentum In-Ear’s general sound is clarity. This was another aspect of the Momentum line that was reproduced in the in-ear variant. Sennheiser always does so well making different elements in a meshed sound distinguishable. You won’t get muddy-ing of sounds that many headphones fail to watch for. The clarity is most noticeable in rock music, which touches on practically all frequencies at the same time. Cymbals don’t get lost in the mix, vocals are front and center, and the bass is bold.

There’s a sense of finesse behind Sennheiser’s reproduction which signifies that it knows what it’s doing, and the Momentum In-Ear is no exception. The soundstage (spatial extension of elements in the sound) is pleasantly wide, especially for a $99 earphone. Even audiophiles with high-end earphones should be satisfied.

But it wouldn’t be right to call the Momentum In-Ear perfect. There are nuances that I can nitpick out (this is a review after-all). I find the bass region to be a little boomy. This can be a good thing if you really like mid-bass, but out of place when you look at the big picture. The surrounding frequencies (sub-bass and mids) can be overshadowed. Fortunately, Sennheiser does articulation so well that the affect is minimal (I have seen it pretty bad from other headphone manufacturers).

I have enjoyed the natural tone from the mids in the Momentum In-Ear, they’re excellent. I could use more airy-ness in general (spacial/open sound), but that’s tougher for in-ears to accomplish. Also, you will find more detail (i.e. high-pitch sparkle or bass depth/definition) in higher-priced headphones. But with that said, you must remember that Sennheiser couldn’t do it all with this earphone. In my opinion, what it delivered significantly pushed the limit of how well a $99 headphone can perform. I agree with the compromises made, the Momentum In-Ear is fantastically well-rounded. I won’t be shy to proclaim that you should drop those earphones that were packaged together with your smartphone and pick up the Momentum In-Ear. Plain and simple, if you’re curious about what all these audiophiles are talking about and don’t want to spend a fortune, the Momentum In-Ear is the perfect set.

I believe Sennheiser completely delivered what it set out for the Momentum In-Ear: to honor the Momentum line and produce a strong offering for the mainstream market. This is quite frankly as good as I gets for $99.