We at AndroidGuys don’t typically cover things on crowdfunding sites unless they are particularly interesting or we’ve been able to secure a pre-funding prototype. It helps a lot with the confidence of a crowdfunding campaign to know that the thing already exists and it helps people to know whether they want to help fund the project. Today’s instance is rather interesting in that it’s a Kickstarter campaign that is being done by an established company called IEC Technologies to do the pre-orders for the launch of their new Bluetooth headset, Shine.

I have to admit, these are some of the best fitting/feeling Bluetooth earbuds I’ve ever used. Most of the time earbuds are really loose and they fall out of my ears, or they are really tight and become uncomfortable after a while. Even with the variable size buds, I’m never satisfied, but the Shine headset is different.

Design is actually one of the highlights of these earbuds. Admittedly, the huge rectangles protruding from the side of your head aren’t the most flattering, but the design strengths aren’t in the buds themselves, it’s in the wire that connects them. The wire that runs between the two earbuds has a clear casing, as opposed to normal black or braided casings. It then uses a colored LED to light up the wire in a spectacular of color, which is where Shine gets its name! You can set it to either surge to the rhythm of your music or your movement, which would be cool when you’re running. 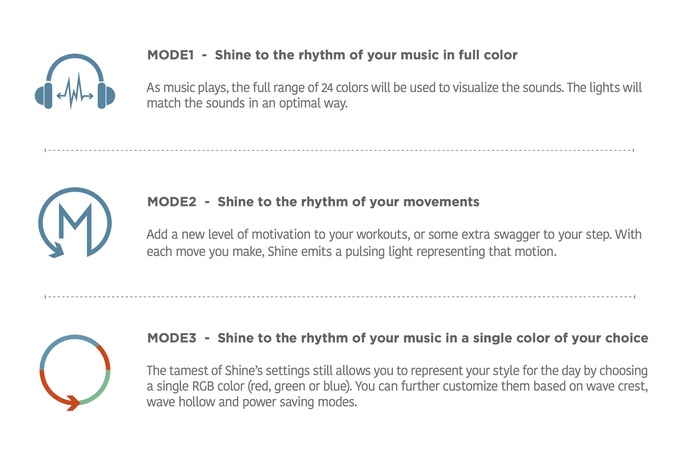 The only real problem with this is that you don’t actually see it when you’re wearing them, so the show is for everyone else. It’s also not very bright, so you are better off showing them off at night.

My experience with these headphones is that they sound pretty good, maybe even above average. They aren’t an audiophile’s dream or nightmare, they’re just middle-of-the-road headphones, and that’s honestly what you should expect at the $60-80 price point that they’re selling it for on Kickstarter. Throughout the entire range, I would say that the sound is “good” – but it definitely favors the mid-to-high end and I would say that those are better than the sounds on the low-end.

What I would note, though, is that they do get rather loud while maintaining the same level of clarity and that’s definitely a huge plus.

With most Bluetooth speakers, you get some sort of on-board audio controls and the case with Shine is no different. Across the top of the right ear you get four buttons: power/play/pause, vol+/music advance, vol-/music reverse, and shine control. On the side of the same earpiece there is a touch-sensitive area that also allows you to quickly play/pause music playback.

I think it’s a nice touch and I love having easy ways like that to control playback without having to feel around for the button. That’s actually the problem with this touch-sensitive area, though – it’s only a single (unmarked, not that it matters when it’s on your head) circle left of center of the earpiece and I found myself batting around trying to hit it with my finger.

Pro tip: you can smack the whole thing with your open palm to activate it pretty consistently, but that’s awfully cumbersome and makes me feel like I’m starring in a V8 commercial.

They also built an app to complement the entire experience with Shine and it’s supposed to be what makes the Shine shine. Unfortunately, and I’ve tried it on multiple phones, it basically doesn’t do anything. It’s an unreleased app, so you would expect it to be buggy but I literally can’t make it do anything of value and all of the main pages are in a foreign language. The app is supposed to help you keep track of your runs like an app such as Runtastic would do and give you granular control of the lights in the headset, but it just doesn’t. I wouldn’t let that take away from the overall experience provided by the headphones, because it isn’t necessary to enjoy all of the features of the headphones, but it’s still a disappointment.

The battery life on these headphones seems to be really good. I never actually wore them down and I used the headphones for at least 3-4 hours. I can’t speak for the seven hours that are advertised, but as big as the earpieces are, it wouldn’t surprise me if there’s a lot of battery packed in there. The flip side of that is that you won’t have to charge it often, because getting the rubber protection cover off of the charging port is next to impossible. I ended up prying the cover off with a screwdriver and subsequently throwing it into the trash because I never wanted to deal with that again. Back to the bright side: it uses a standard micro-USB plug to charge, and you probably have about 30 of those lying around your house.

Shine appears to be a good set of headphones for a reasonable amount of money. It’s definitely cool that it lights up in the dark and if they get the app working properly before release, that’s just value added. More than anything else, these aren’t just a half-baked project that will never come to Kickstarter backers – it’s already here. The Kickstarter campaign has about two weeks left at this point and you can still nab a pair for $60 – it wouldn’t be a bad gift (and according to their timeline it might be here in time for Christmas!)

If you’re interested in Shine, take a look at their Kickstarter campaign and help them bring it to the world!
Source: Kickstarter