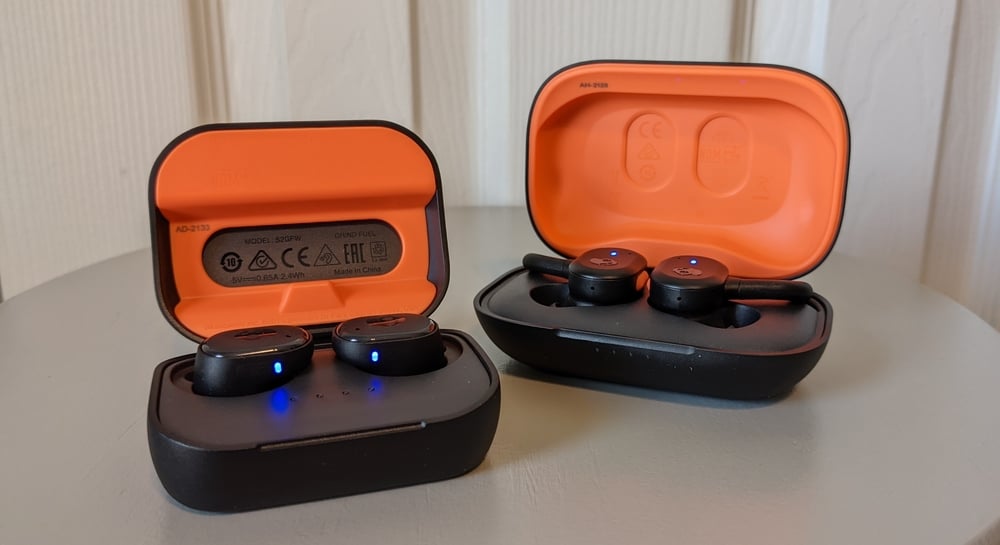 Skullcandy is one of the oldest and most recognized names in mobile accessories. The company has a new lineup for 2021 and it’s been gracious to allow us a few weeks with these earbuds. From design to software, the new Grind Fuel and Push Active have a lot to offer.

I like the overall design of the Skullcandy Grind Fuel and Push Active headsets. Skullcandy has historically been a little over the top with some of their colors and design over the years and I prefer the more subdued matte black that these have going. Each has a pop of orange in the cases and that’s about it. 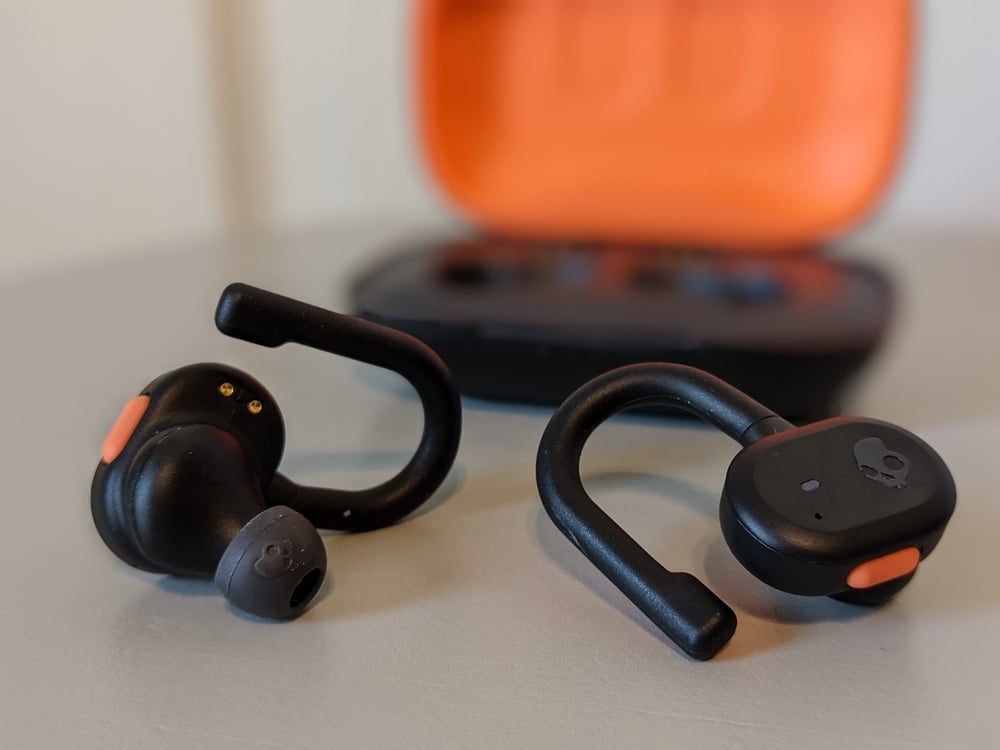 The Push Active is the more “budget” model tuned for more of a sports option earbud. You have a very comfortable and stable loop system that keeps the buds in place while in motion. There’s an interactive button on the top of the earpiece for some options we’ll cover further into the review.

The Grind Fuel is the more premium model in Skullcandy’s new lineup. The design is more akin to that of the Galaxy buds with a “bullet” or “bean” design. The interaction happens on a button for these buds as well, but it’s a flush-mounted panel on the outside of each earpiece. 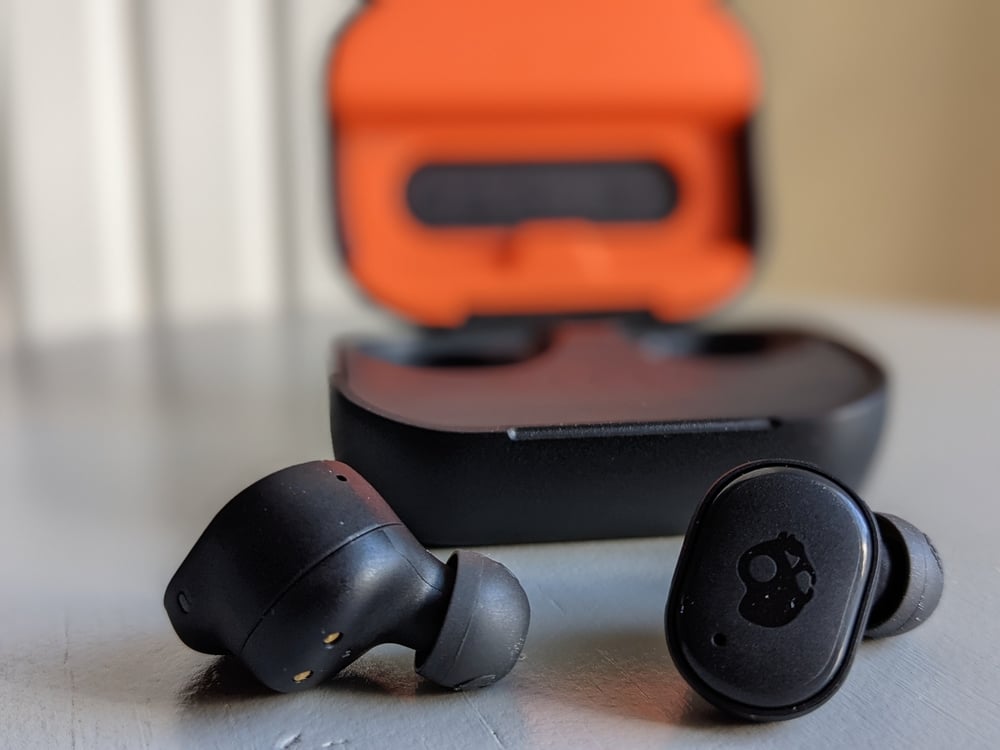 Let’s run through some of the hardware and feature specifications of these new Skullcandy earbuds. There’s a lot of overlap here so if we don’t call out a specific model it applies to both the Grind Fuel and Push Active.

Both units offer over-the-air updates. You can push new firmware to the earbuds via the Skullcandy app. When an update is available you get a nice notification when you open the app with the earbuds connected. Within a few minutes, you can have the latest software installed.

Of course, you get a premium audio experience with both the Grind Fuel and the Push Active. IP55 water and sweat resistance are onboard as well. This gives users the option to use these great earbuds in any environment.

You can custom-tune each bud to your liking inside the app as well. Skullcandy has built-in equalizer options and pre-built profiles to get the sound to what you want.

Two big differentiators that Skullcandy has brought to the table with the Grind Fuel and Push Active are Skull-iQ and the Tile integration. These are unique features that we will cover individually over the next few sections.

Smarter devices are what every user wants these days. Skull-iQ brings some new tech to Skullcandy’s earbuds inside both of these models. Essentially, this is a stripped-down voice assistant independent of your phone.

This feature works exceptionally well. At first, I thought it was a gimmick over existing voice assistants but it’s more akin to hands-free tech in cars. It allowed me to interact with the playback controls via voice without the overhead of Google or Bixby.

You can easily raise or lower the volume. Skipping tracks is now audible. Skull-iQ is a nice iteration to add layers to the physical buttons to control the Grind Fuel and Push Active. You simply start your command with “hey Skullcandy” and you are good to go.

In addition to basic controls, these two earbuds are the first to offer Spotify tap integration. Using the same Skullcandy hotword you can access your Spotify library. This includes playlists, podcasts, and your favorite artists. The Spotify Tap option can also be set to a button input via the Skullcandy app.

Spotify isn’t the only third party you have onboard the Grind Fuel and Push Active. To help keep up with your precious hardware, SKullycandy has included Tile in each earbud. So the next time you go fumbling through your coach cushions you can just ring the earpiece to track it down.

In practice, this works just like any other Tile device. Download the Tile app. Add it to your profile. That’s it. This has already saved me from a lost Grind Fuel while rummaging through boxes in the garage and dropping it.

It’s one thing to put that on the spec sheet, but Skullcandy’s assessment is spot on. I consistently hit these marks in my testing. Endurance is one of the best features of these earbuds. 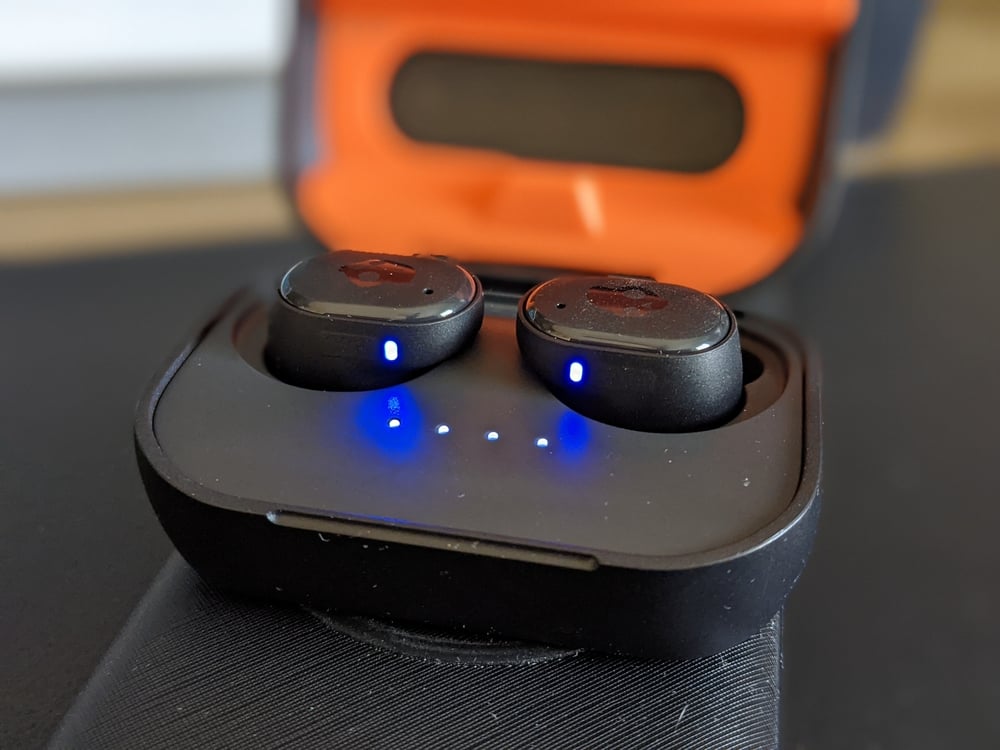 One note on the Grind Fuel case that was annoying. The battery indicator lights are on the inside of the case. That means while charging you get no visual feedback on battery levels without opening the case. It’s not a deal-breaker, but it’s just weird and leaves you wondering about the progress of the charger. I’ve never seen this on the inside of an earbud case.

Audio for both the Grind Fuel and Push Active is adequate for the market. It’s not gonna blow you away, but no wireless earbud is as rich as say canned headphones. I will say that both models are “muted”. They just seem to be at the midline for everything.

Bass and even harder mids don’t seem to come thru as much as other offerings out there. I personally like this as bass can be overpowering on many devices. However, it’s worth mentioning for others.

The call quality was great. I took multiple cell calls with my parents on both models as well as voice sessions over Microsoft Teams with zero issues.

I think Skullcandy has two very competent models in the earbud markets with the Grind Fuel and Push Active. With the combination of innovative software like Skull-iQ and Spotify Tap, you will get a very forward-thinking wireless earbud with either unit.

Pair that with exceptional battery life and I think Skullcandy has winners in both. That only leaves price as the deciding factor for most users. The Push Active can be yours for just $80. If feeling like you can spend another $20 the Grind Fuel will set you back $100.

Buy the Push Active on Skullcandy.com

Buy the Grind Fuel on Skullcandy.com