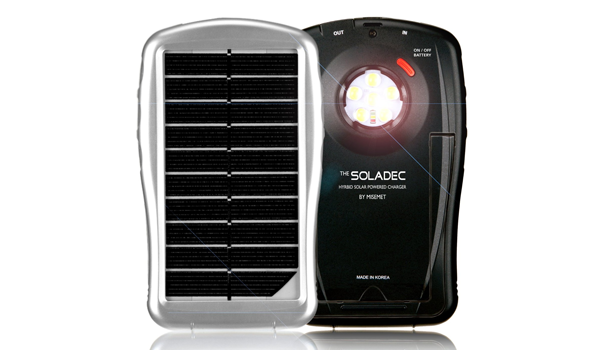 If you’re planning on doing a little camping or spending a few days away from power then I’ve got something you need to add to your packing checklist.  It’s called the Soladec Hybrid All-in-One Portable Solar Power Charger and External Battery Pack with Integrated Ultra High-Flux LED Light and it was my best friend last week.

I spent the first half of the week on a cub scout camping trip where I was removed from society and all its wonderful trappings (power outlets). Going in, I expected to be outside and in the summer sun, following a bunch of boys around. Since I was the guy in charge of taking pictures and video for Facebook, I had to make sure I was going to be juiced up. The Soladec was the first thing I pulled out of the box and set up and it was often the last thing I put away at night. 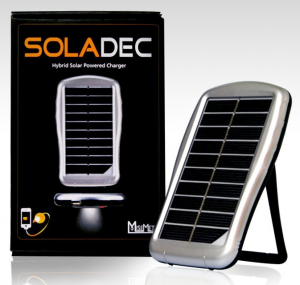 While the Soladec is billed as a solar-powered charger, it’s actually more versatile than you’d expect.  In addition to pulling in juice from the sun, this guy also features microUSB charging as well.  I was very happy to see this on the second day when it was rather cloudy and dreary. Somewhere along the way, I learned that there were some outlets in the mess hall.  Each morning at breakfast I would plug in the Soladec and pull in some power. Throughout the day, I’d clip it to my backpack and “top it off” with solar power.  After a few days of combination charging, I found the Soladec to be very handy.

What did I use the Soladec to charge?  Just about anything, really.  I had multiple phones with me, a digital camera, and a Nexus 7 tablet.  I was, for the most part, able to completely charge a phone or two every day with some left over.  The other scout fathers noticed the charger on day one and came to me throughout the trip to juice up.  On average, the Soladec is rated to completely charge most smartphones 2-2.5 times.  Depending on how many times I was able to get to an actual outlet, I was able to exceed this.  Keep in mind that if you are relying strictly on the power of the sun then you’ll likely not accomplish this.  Results, as always, vary depending on what you are charging.

[blockquote align=”left” variation=”hotpink”]After a few days of combination charging, I found the Soladec to be very handy.[/blockquote]
The Soladec was incredibly useful at night, not only because of its charging, but for the ultra-bright LED light on the rear.  Brighter than any other flashlights we packed, this was the device that lighted our way to the showers and around the camp.  Thanks to its kickstand leg, we would also set this on the table to see where all of our s’mores fixings were.

Staying with the back side for a moment, there’s an indicator which shows you how much power is left however it does not give a percentage.  The remaining level is shown via a red, yellow, and green light.  Also, the intelligent charging system will turn itself off  when the device is fully charged.

How big is the Soladec?  Picture a chubby Kindle Fire and you’ve got a good mental picture.  It weights about as much as any other 7-inch tablet on the market and packs away quite nicely.

What’s in the box?

Price for the Soladec hovers right around $100 and I have no problem recommending the device at this price.  Two of the scout fathers that made the trip last week have already ordered one of these for themselves and were extremely anxious to receive it.

Android accessories you need to become a superior gamer (PROMOTED)