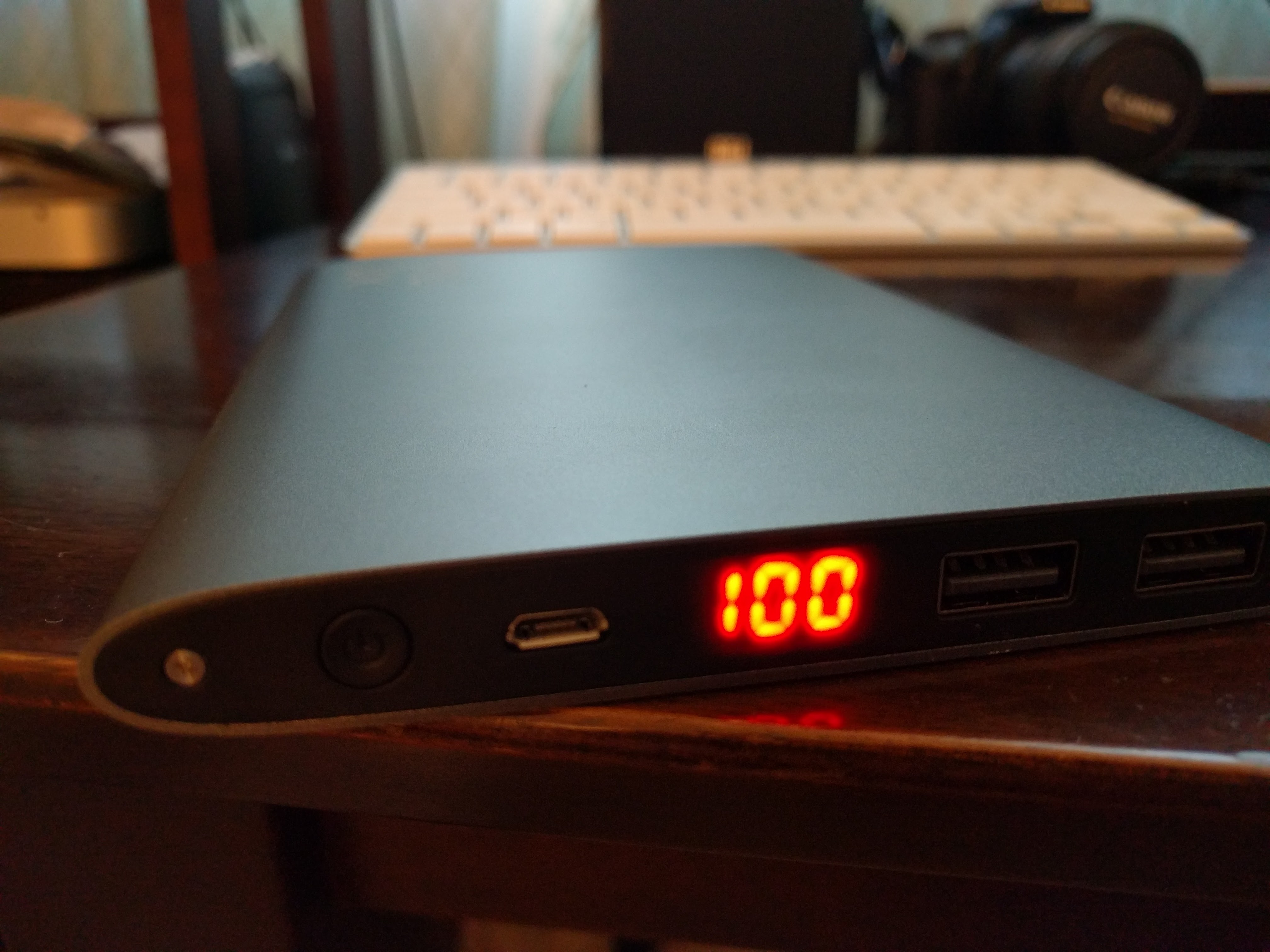 The unfortunate part about reviewing products is sometimes it can be difficult to be wowed by a new product. It’s even much more difficult to be impressed by a portable power bank, which is used to charge devices like smartphones, tablets and smartwatches, simply because there are hundreds competing with each other. Don’t get me wrong, I don’t dislike reviewing power banks, but I just came across the Solove Titan 20000mAh Ultra Slim Power Bank and it really WOWED me. 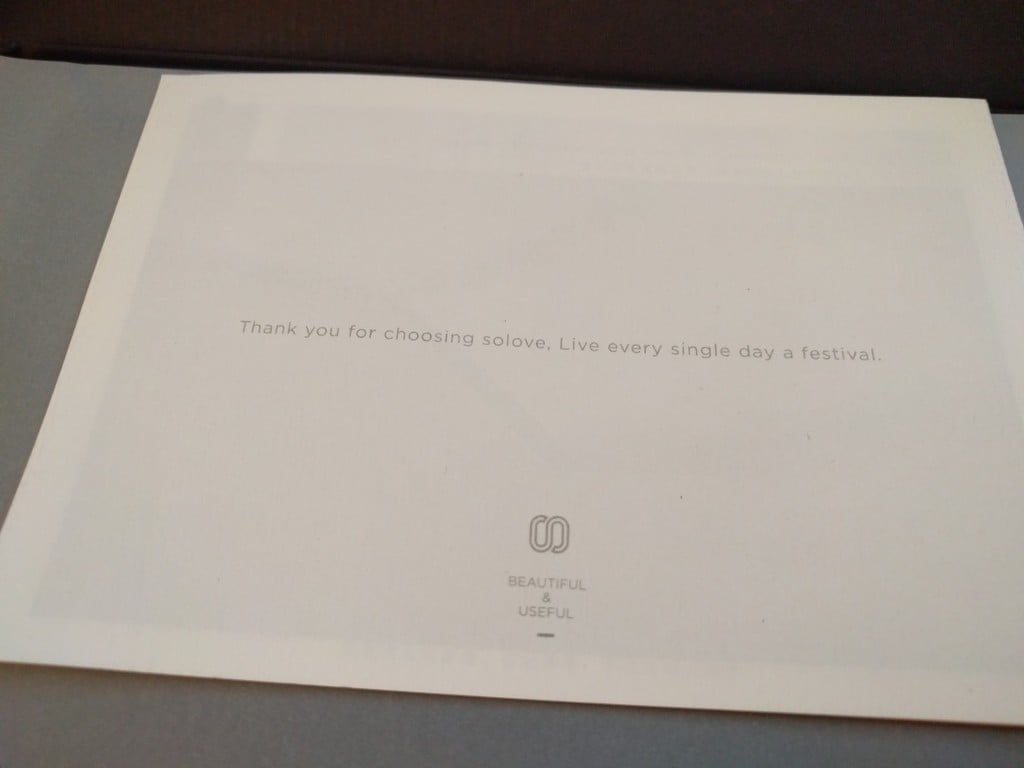 When I first saw pictures of the Solove Titan on Amazon.com, I guessed it would be another typical plastic battery pack. Or at least another decently built battery that serves its main purpose and gives no more.

I figured for the price of $39.99 there was no way this battery was made out of real aluminum. Boy was I wrong. The Solove Titan is truly encased in aluminum, and feels absolutely identical to the feel I get when I pick up my Macbook air. It’s cold to the touch and feels solid to the core. We’ve reviewed other metal encased batteries before, but those sold for double or triple the price of the Solove Titan. And again, the main purpose of the Solove Titan is to charge your devices when you’re away from a wall outlet. It’s pretty obvious the looks are distracting me from its main purpose. 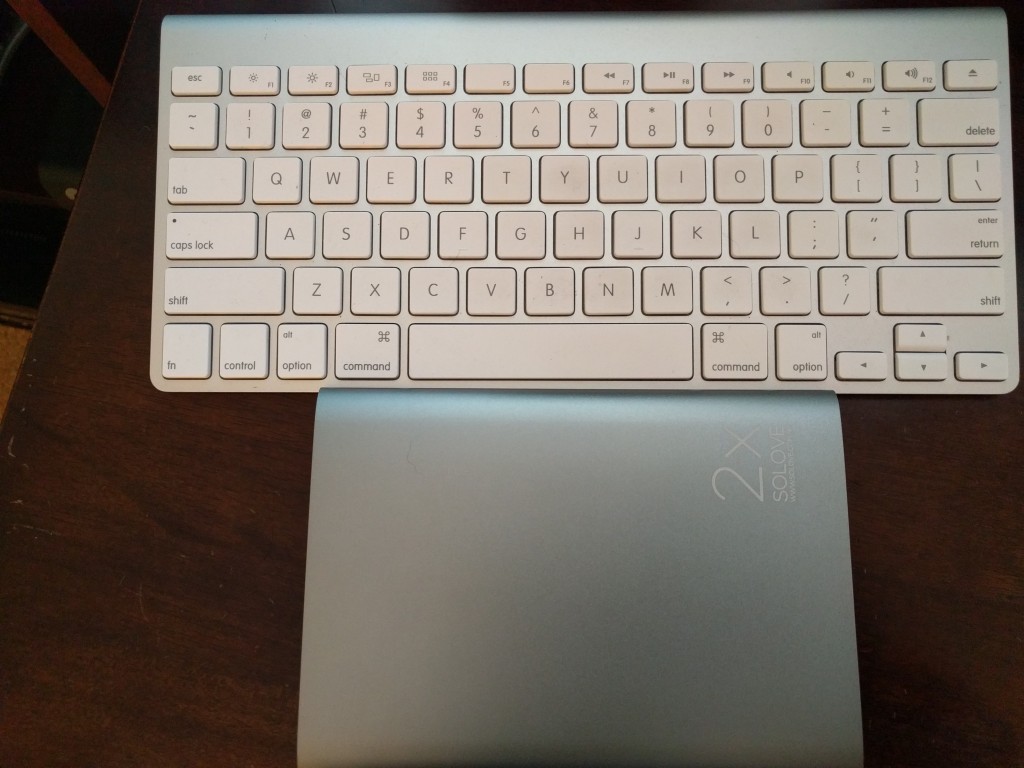 The external battery is rated for 20000mAh, which is more than enough power to charge your Nexus 6P(3450mAh) almost six full charges, and it can definitely charge your Samsung Galaxy Note 5 and Moto X Pure (both 3000mAh) six full times with a little power to spare. It can almost recharge the iPad Air 2 almost three full times, giving you over a weeks full of usage on each device without ever needing to attach your devices to a wall.

The Solove Titan comes with a micro-USB input for charging the battery, two 3.1amp output USB ports and a very useful and unique battery level indicator. It displays the remaining power down to the exact percentage.

Design wise, the Solove Titan is the best power bank I have personally ever come across. 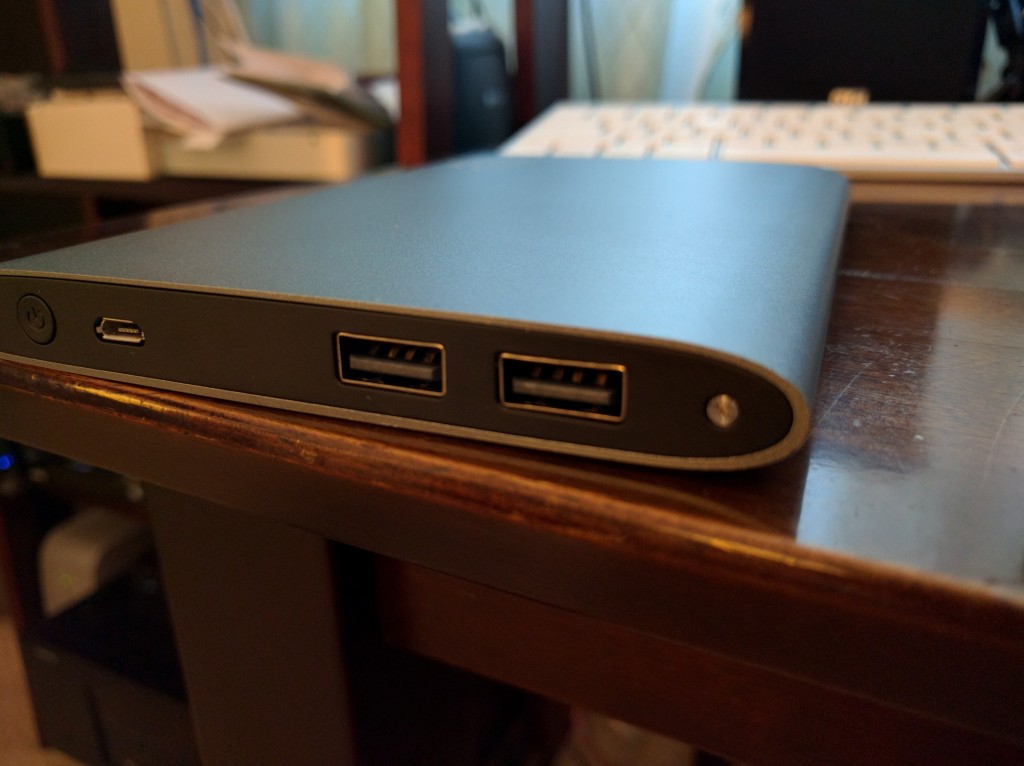 For purposes of this review I was charging two smartphones (Nexus 6P and Nexus 5X) over the course of four days to expedite the review. The Solove Titan really lived up to its specs and powered both of my devices while I stayed away from my wall chargers. 20000mAh is a ton of power, and realistically if I only charged one smartphone, my Nexus 6P which has really good battery life, I may have needed up to two weeks to fully test this battery.

If I had my nieces with me, that may have been a different story as those two are always on their phones or tablets. Instagram, Minecraft, texting, Instagram, Minecraft, selfies, YouTube, Instagram, etc. Those two really know how to drain batteries. If you know people like this or have some of them yourselves, the Solove Titan is perfect for them as they are constantly draining their power.

The Solove Titan is a big battery, but it isn’t as big as others with the same power rating. It weighs in at 1.17 pounds so you’re most likely not going to be carrying this in a pocket, but it does fit quite nicely in a laptop bag, backpack or purse. I carried mine in my backpack and Solove kindly provided a beautifully designed felt cover to slide the battery into for protection. There’s also a pocket sewn into the back which I would occasionally drop a phone in while leaving it to charge. Even having a little pocket for your phone is something that was well thought out when it came to design and functionality. Having the case with a pocket made it easy to carry around in my hand. 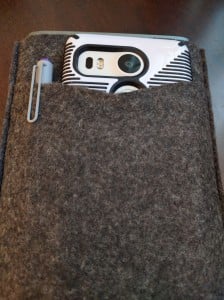 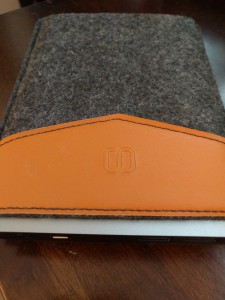 Most importantly, the Solove Titan actually did get two of my smartphones through four full days of usage with 42% remaining. I don’t use two phones full-time, so it was difficult to truly drain the battery. In addition, Google has completely improved battery life management in Android 6.0 Marshmallow. It did live up to it’s rating during my testing, and I was so confident in the battery that I didn’t bring a wall charger with me when I had to travel for work for three full days. I just toted the Solove Titan around in my backpack and got power when I needed it.

There isn’t much to an external power bank other than its power reserves and the Solove Titan has more than enough to keep you running at 100%. I absolutely loved the power indicator as it does measure your remaining juice down to the exact percentage. Other batteries usually have four LED lights and when you’re out, you’re out.

The Solove Titan 20000mAh battery simply wowed me. Even some of the other guys here at Androidguys.com picked up on how beautiful this battery really is. It not only is a looker but it performs as designed and can easily support a businessman on a work trip, a blogger who wants to avoid a wall outlet for a week, or even a family of gadget lovers who are traveling for Thanksgiving.

I usually am the type to prefer form over function, but when you come across a rare beauty with the insides to match, you better put a ring on it.

If you want to learn more or make a purchase, head on over to Amazon.com. The Solove Titan comes in gray, silver, gold and green. I highly recommend it. 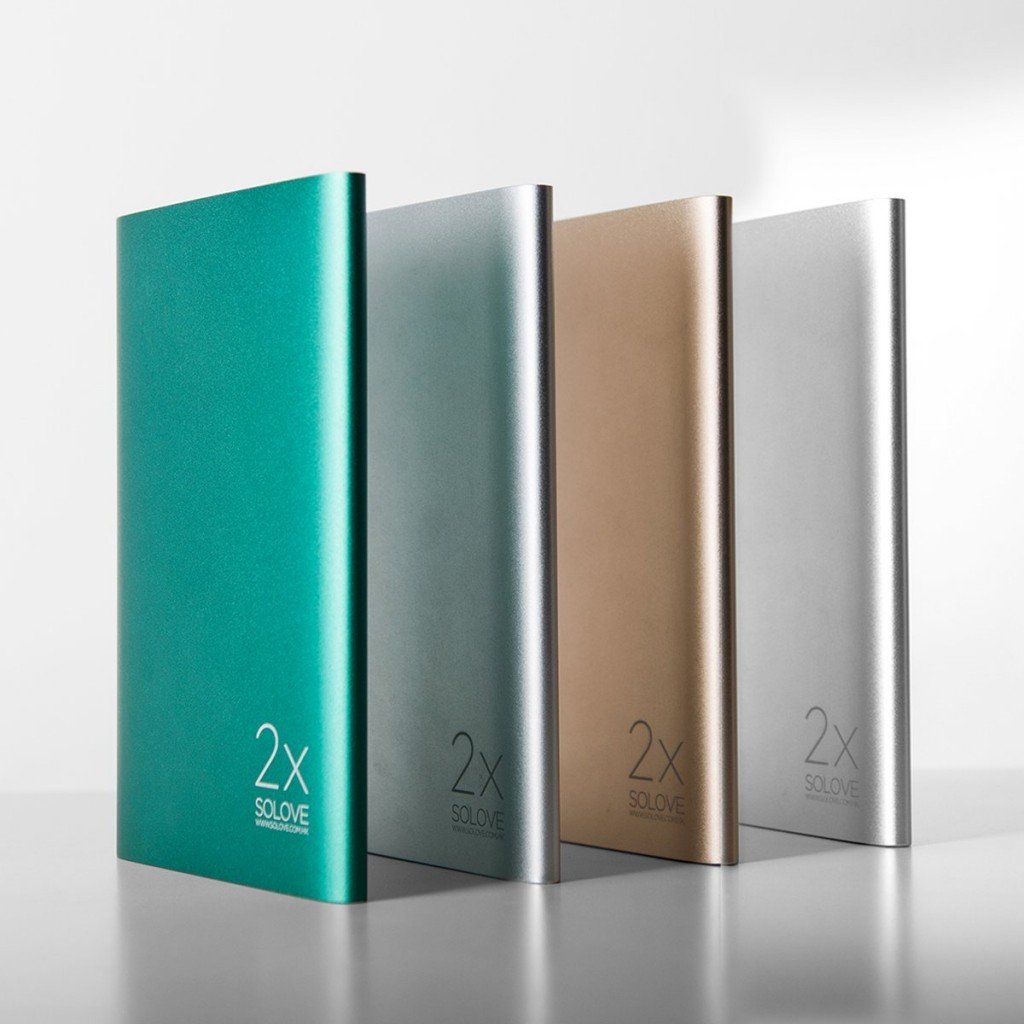 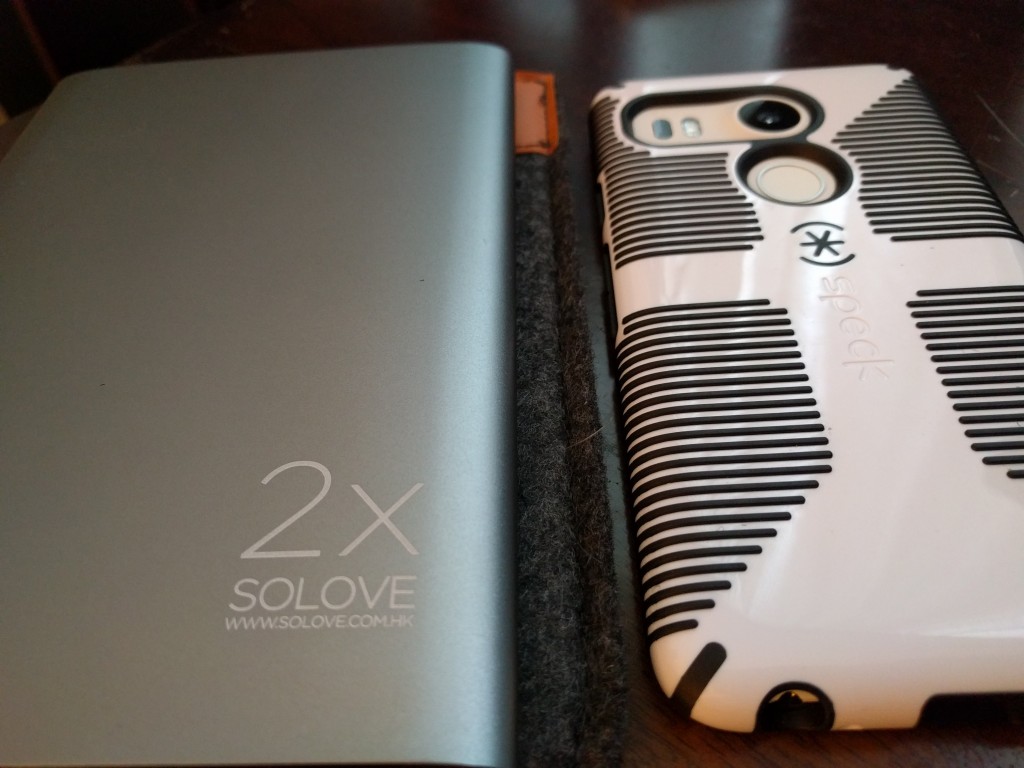