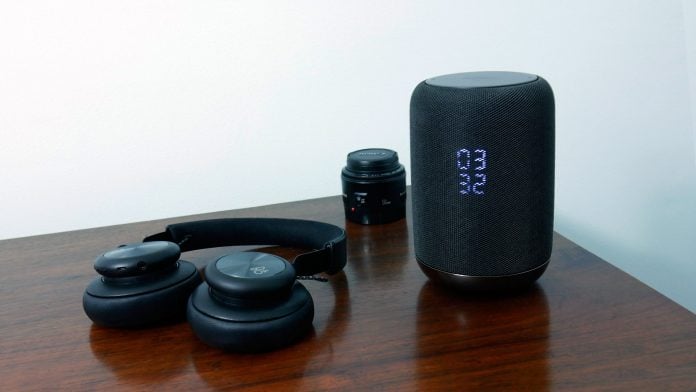 More and more Google Assistant smart speakers are coming out each year. As the number grows so do your choices. While they all essentially do the same thing, each speaker tries to find a way to stand out amongst the crowd. Keep reading below to find out the many ways the S50G loaned to us by Sony finds a way to separate itself from the flock.

First and foremost you can’t overlook the design of the Sony S50G, mostly because it looks exactly like Apple’s smart speaker, the Homepod. Both share a strikingly similar shape and appear to be made from similar materials.

That in itself is not a bad thing, many manufacturers copy each other’s designs and if you’re a fan of Apple aesthetics then you’ll most likely find the S50G attractive. Personally, I don’t mind that they copied the Homepod and think the Sony S50G is a fantastic looking speaker that would look great in anyone’s home. Unlike the Homepod the S50G also has the benefit of being IPX3 splashproof making it safe to use in the kitchen. 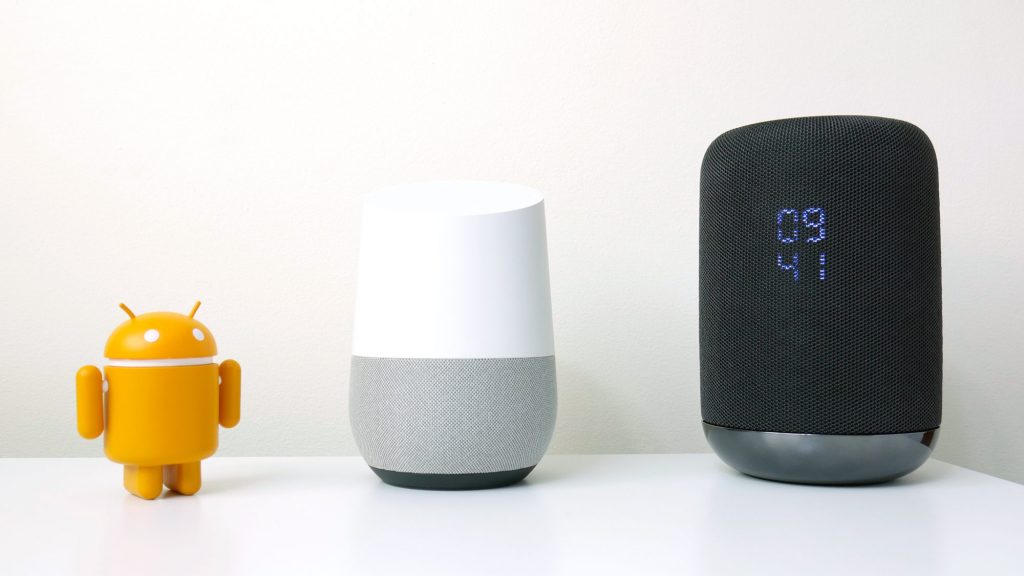 The soft fabric gives it a nice cozy feel, but my favorite standout from the design is the built-in clock. This was absolutely perfect to replace my out of date alarm clock, which I only kept around to get a quick glance of the time. Even better it sets itself so you don’t have to worry if there is a power surge or you relocate it.

If you’re not a fan of the clock, that’s fine as well because a button on the underside can adjust the brightness or completely disable it. In fact, all the buttons are on the bottom in addition to the brightness/restart button there is also a pairing button, hold button, and microphone off button. 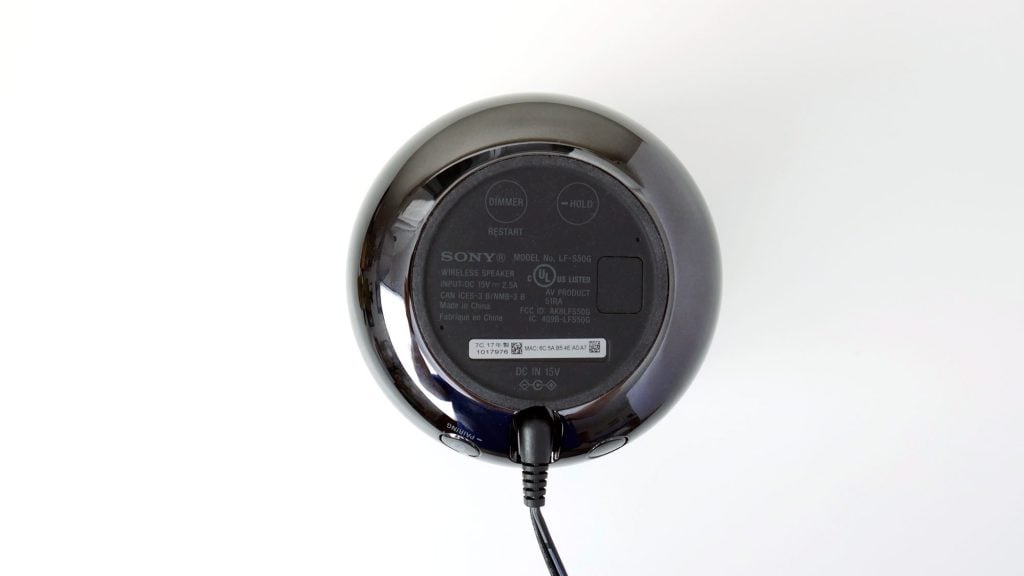 One of the main benefits of a smart speaker is not having to pair your phone in order to play music. However, most offer a Bluetooth connection including the Sony S50G. What distinguishes Sony from other speakers here is they included NFC making it more convenient to connect via Bluetooth. 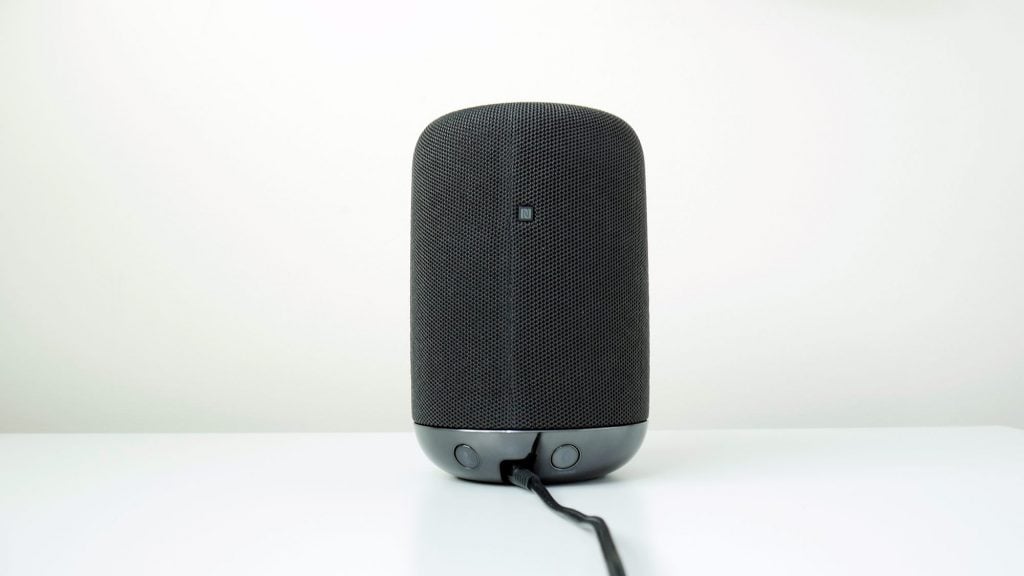 The top of the S50G looks clean and simple, but there is more going on here than meets the eye. Sony has included a motion sensor for hands-free gestures to control activating Assistant, playing/pausing music, and skipping tracks when listening to music.

The ability to wave your hand over the top of the speaker like a Jedi to control it would be an amazing feature to make your speaker stand out. If it weren’t for these two reasons. For one the controls are extremely finicky and using them often turned into a frustrating task instead of the convenience it should have been. 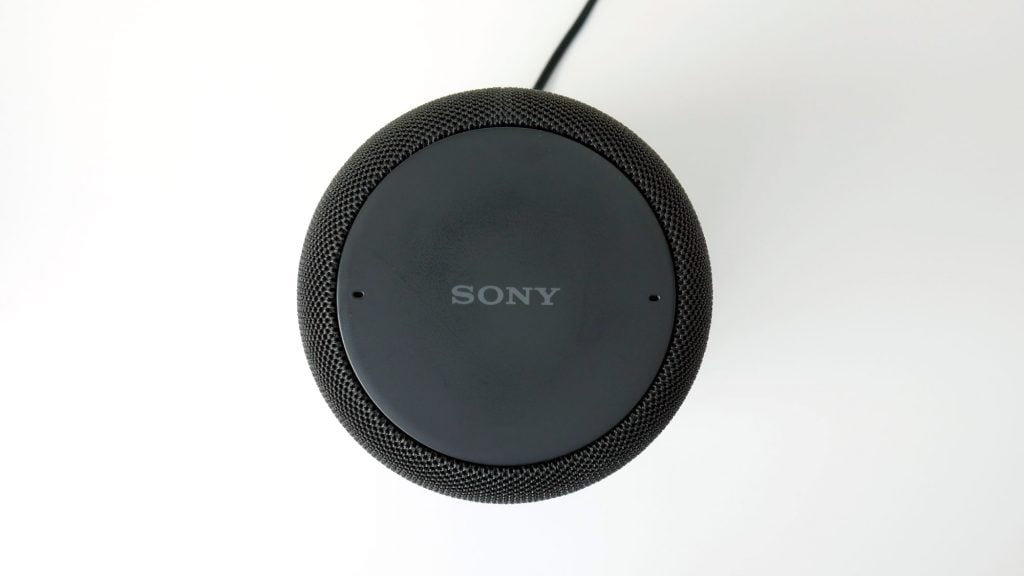 The second reason is one of the benefits of a smart speaker is everything is controlled by your voice when you are several feet away from the speaker. While the gestures require you to be right next to it.

The top is also touch-sensitive allowing you to change the volume by running your finger over it in a clockwise or counterclockwise motion. Unfortunately, once again this experience will leave you unsatisfied. In my experience, each time I tried to adjust the volume this way it took several tries. Making it easier to just ask the speaker to change the volume instead.

When it comes to Assistant enabled speakers, one area they cannot truly differentiate themselves is through the general smart features. That is except for two exclusive features found only on Google smart speakers such as placing phone calls and an equalizer option.

Beyond that, any speaker Assistant speaker you find will have the ability to control your smart home, answer your questions, play music, do multi-room audio playback, play podcasts, make reminders, provide you with weather and news, and much much more.

Simply put, outside of a couple of Google exclusive features no matter what speaker you choose you’ll have all of the same smart functions. Which is why Assistant speakers choose to stand out primarily through their design and sound quality.

Microphone performance met my expectations and then some. Immediately when I began using the S50G it was apparent to me that the previous speaker I had been using had a less sensitive microphone. I had become accustomed to speaking louder to activate Assistant and was delighted that I could now lower my voice some.

The far-field technology and microphone placement on the S50G work great together and you won’t have to worry about yelling at it, unless you want to that is.

The S50G has a fairly balanced sound signature with emphasis slightly more towards the high end. This results in music sounding clear and clean but also somewhat overwhelms the low end. The bass itself is still present but comes off rather weak in comparison to the treble.

If you’re someone who prefers more impact in the low end of your music you’ll be disappointed. However, if clarity in your music is more important then you’ll be pleased with how bass doesn’t take over the tracks. No matter how you like your music though the S50G gets plenty loud enough to fill a room and be heard a couple of rooms over. Even better is that it can reach max volume without any meaningful distortion.

One complaint I have about the sound of the S50G has to do with the volume of the Assistant’s voice. There is no way to adjust the volume of the voice and in general, it is louder than I’d like. This prevented me from using it early in the morning or late in the evening worrying about disturbing others as they were sleeping. The S50G is not the only speaker that does this but there are others on the market which adjust the voice dynamically with the system volume.

In the end, the Sony S50G finds a way to distinguish itself amongst the competition with clear sound, unique motion gestures, and a clock. The biggest problem is the unique motion gestures are also uniquely frustrating. After several attempts, you’ll probably end up never using them again much like myself.

However, if you ignore these gestures and prefer an Assistant speaker with clear sound and a stylish design the S50G is a very viable option. Unfortunately, the design is not an uncommon one but there are worse things than looking like an Apple Homepod knockoff. If you’re not a fan of the design or prefer more bass in your music then be sure to check out our list of Assistant speakers for an alternative.