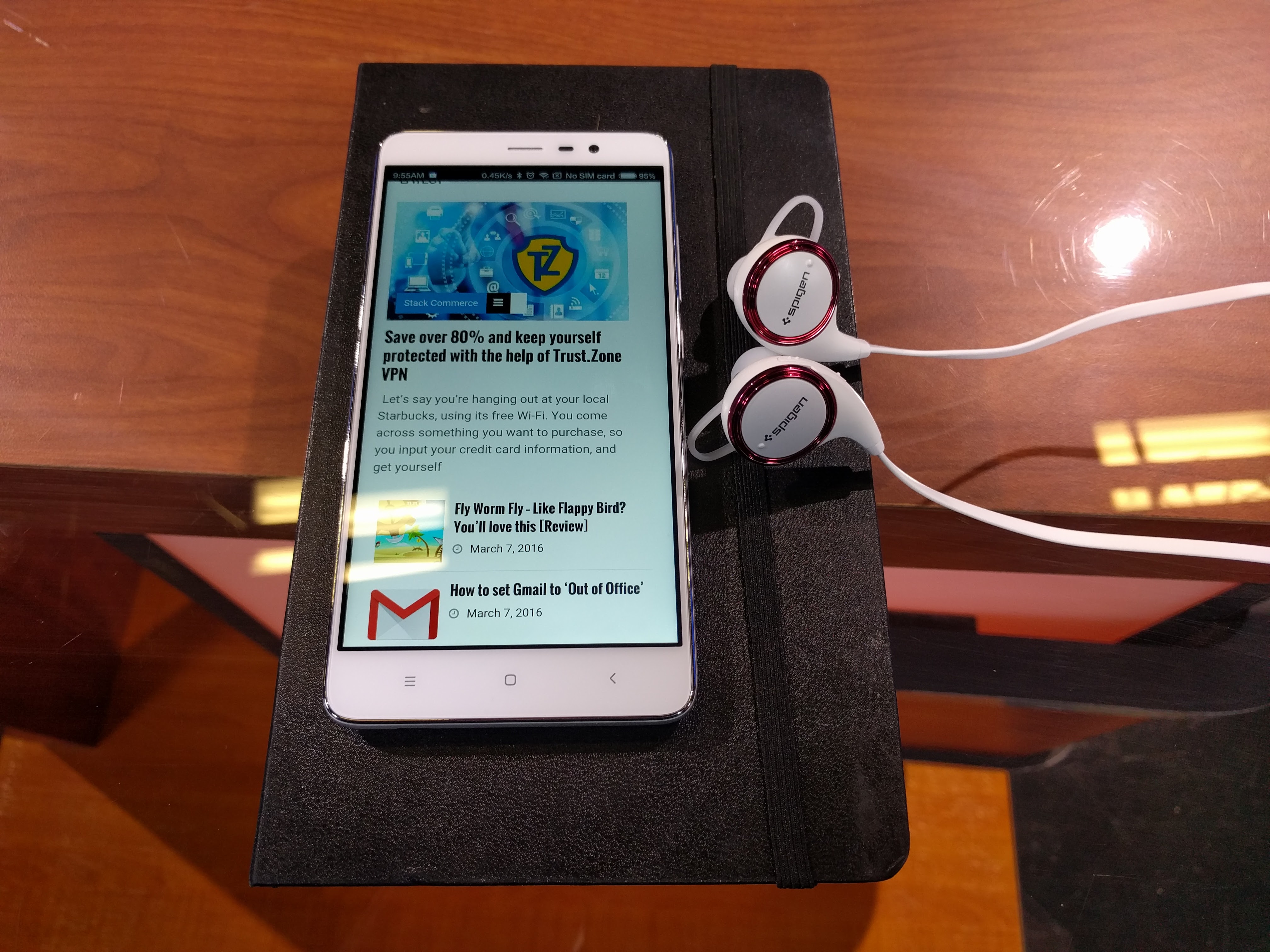 You probably know the name Spigen. The California-based company has made a name by making attractive and cost-effective cases for almost every phone on the market. I’m a huge fan of the Rugged Armor case for my Nexus 6P, so when I saw that Spigen had ventured into Bluetooth earbuds, I was intrigued. Could it’s high quality/low-cost strategy work in audio? I decided to pick up a pair to find out for myself. 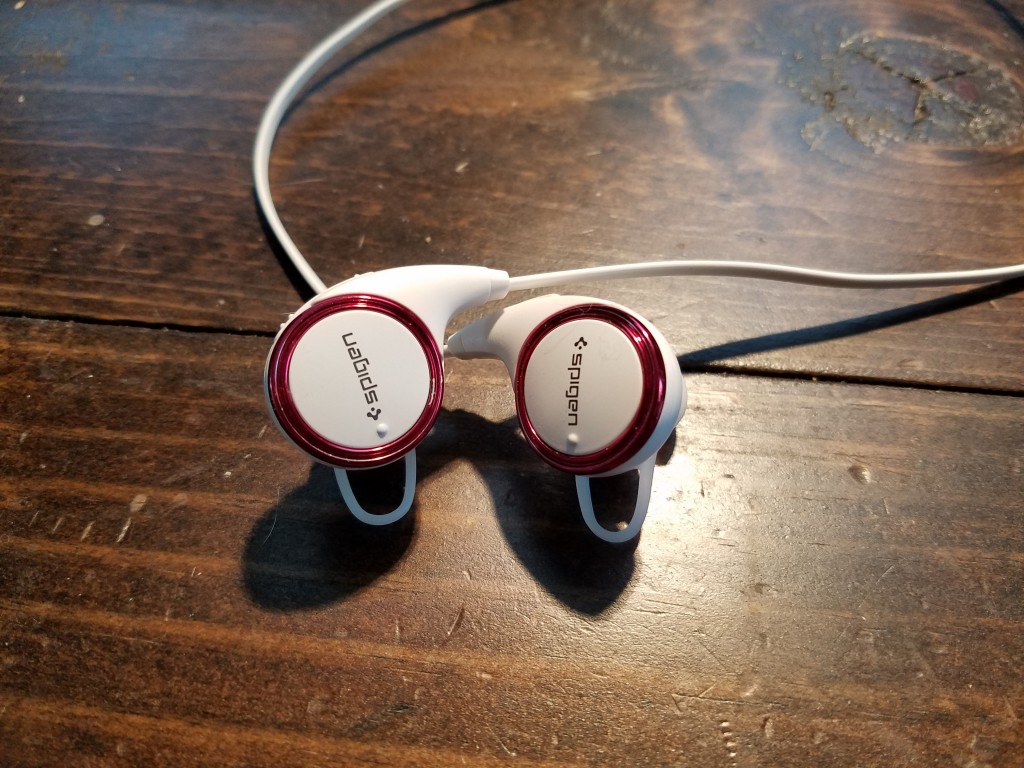 Bluetooth earbuds are normally pretty similar, no matter the price. Two earbuds connected with a cord. Somewhere in there is a Bluetooth radio to connect to your phone or computer. I was surprised just how big the casing for the Spigen R12E Bluetooth Earbuds actually is. The rounded body are about an inch across, which doesn’t sound that big until you compare it to the size of the ear tip that goes into your ear. It’s nothing off-putting, just different.

You can pick up the earbuds in two color combinations. I opted for the white with red accents and black text, whereas my wife went with the black earbuds with gold accents and writing. I love the look of both but tend to tilt toward the cleaner white look.

The right earbud houses a large power button with a Spigen logo, a volume rocker, and microphone. There is nothing printed on the earbuds to indicate this is actually the power button. When you look in the instructions it’s laid out, but it could be a bit clearer just by looking at them. 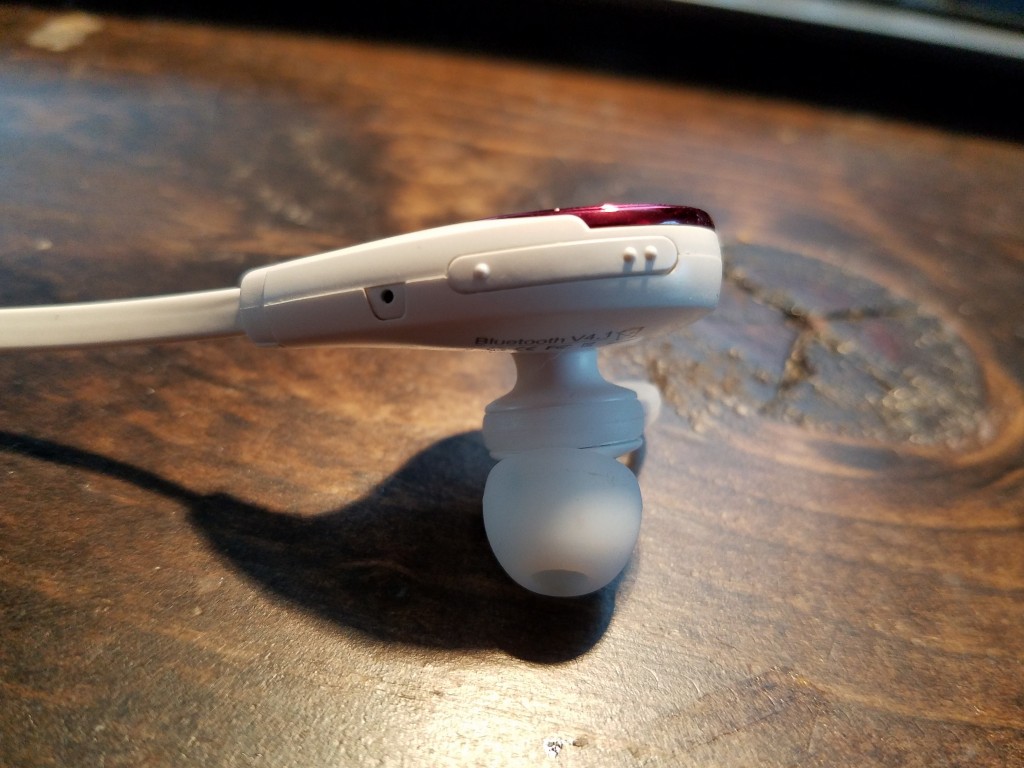 You’ll find wings on both tips to help keep the earbuds in your ears while you’re working out, in addition to R and L text on corresponding earbuds to indicate which ear they belong to. The wings do a great job helping the tips stay in your ears while exercising, and the earbuds provide excellent noise isolation. My wife stood next to me and literally yelled at me while I had music on at a medium volume. I heard nothing. 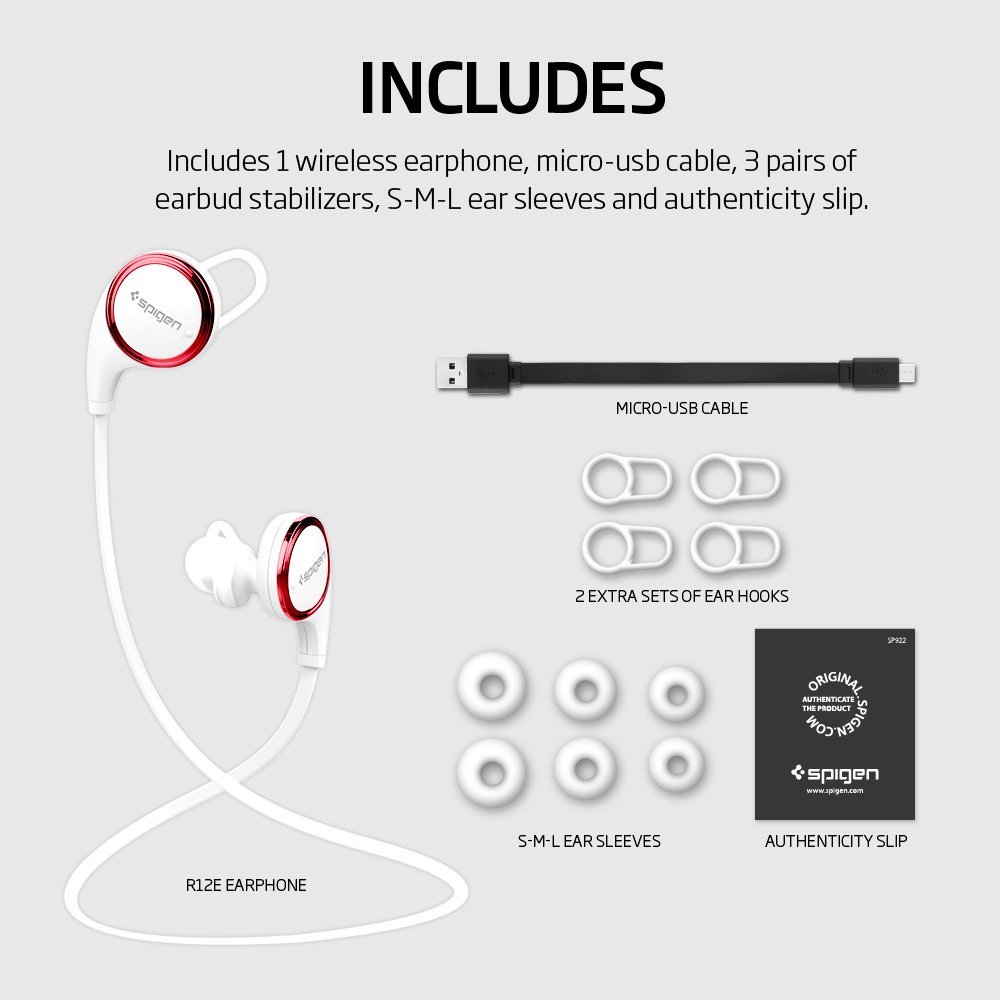 Spigen made the R12E’s pretty easy to operate. A three-second press on the right earbud’s button turns them on, and holding the power button for eight seconds (while off) puts the earbuds into pairing mode.

The volume rocker is easy to press, but also hard to find when you’re searching for it but cant see it. It’s easy to gloss over the two bumps that indicate volume up, and one bump that indicates volume down.

There is a micro-USB port on the left earbud for charging that has a flap to keep liquids out. The in-ear part of the earbuds are curved so they can sit comfortably in your ear canal. In my testing, there was almost no sound leak at all due to this design. If the default tips don’t fit comfortably, Spigen has included a few other sets to suit those of us with different sized ear canals. During calls, those on the line said my voice sounded accurate with adequate volume. While you shouldn’t expect HD voice quality, these do good enough and my friends and family had no problems understanding what I was saying. Alternately, calls sounded fine on my end too.

The R12E’s get pretty loud, and are very clear on voice calls. This translates well to audio quality for music as well.

I’ll be the first to tell you I’m not an audiophile. If I were, I probably wouldn’t be using $25 Bluetooth earbuds. But, I can speak to how good these sounds in comparison to others in the price range. I’ve tried Intello’s and Lyrica’s earbuds, and Spigen smokes both of them.

What really blows me away is how much bass these earbuds put out. You can feel it. Most Bluetooth earbuds sound pretty thin with only minor bass, but Spigen somehow got a bassy and full-bodied sound in this little package. Color me impressed.

Highs are clear and crisp without piercing or crackling and the mids are fine. Nothing special. The sounds don’t come out congested but aren’t especially clear. I’d rate the audio quality average in that aspect, but the highs and lows push them into fantastic territory.

I really, really love these earbuds. I tend to go for Bluetooth options because I hate wires, but that generally means giving up some sound quality. Spigen takes a lot of pain out of that equation by putting out a really high quality set of Bluetooth earbuds that are fun to listen to.

These aren’t perfect, but they’re damn close. I wish the beep wasn’t so loud when you reach max volume, but that can be forgiven since it doesn’t happen often. I generally control the audio level from my phone and leave the earbuds at about half volume because they’re loud anyway. I can, however, see how this would be annoying for someone working out that doesn’t want to mess with their phone.

I keep these in my bag with everything else, and while it was banging around some of the red coating came off. Not a huge deal, but annoying. 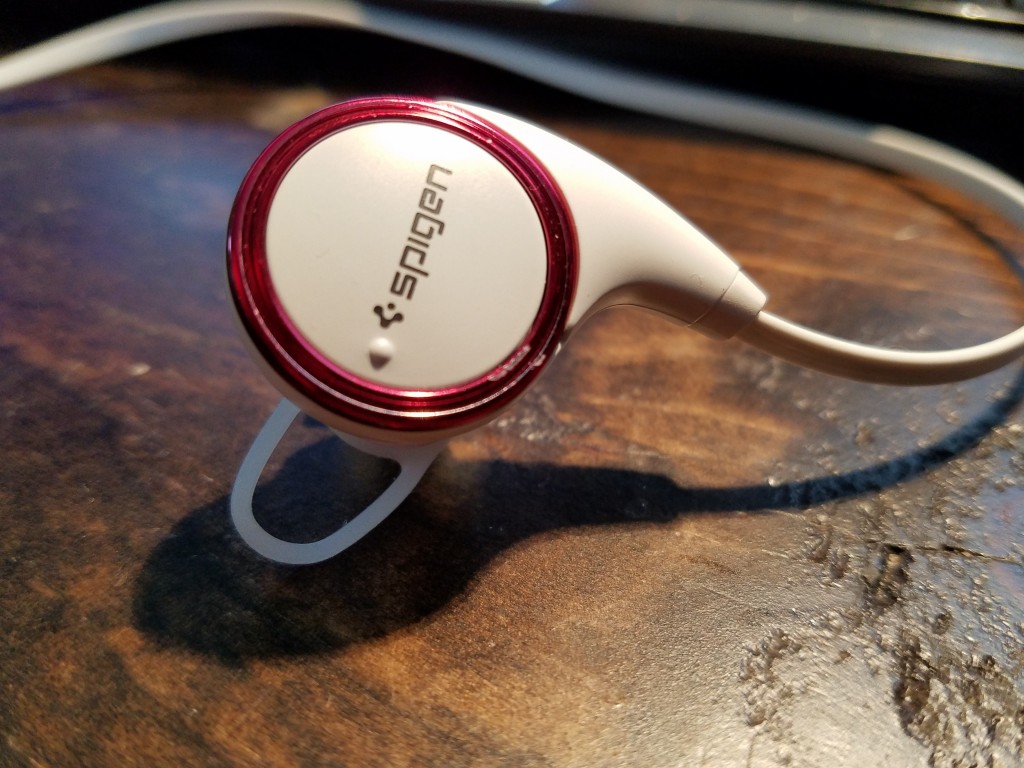 But, those negatives don’t even come close to undermining how good these sound. I’ve heard plenty of mediocre earbuds in my time, and these exceed all expectations.

Spigen seems to have stepped out of their comfort zone of making phone cases, and they absolutely nailed it. You won’t find many earbuds out there that stand up to the sound of the R12E, regardless of price.

Hurry, the xFyro Active Noise Cancelling Pro Earbuds are cheaper than ever!