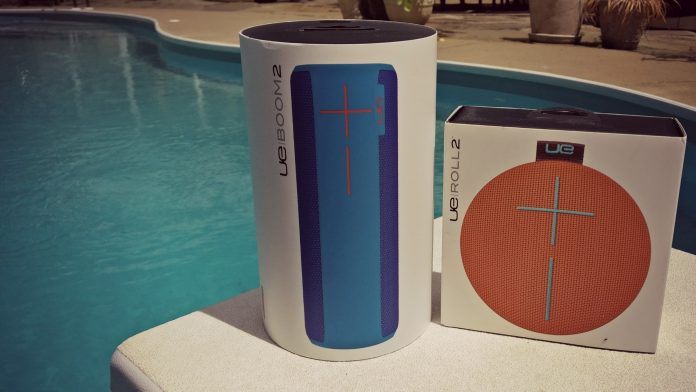 Look, just because some of you have to go back to school soon, doesn’t mean that the summer is over. Based on some of the recent temperatures we suspect it will be quite a while until things have cooled down and we’re all back inside and bundled up. In other words, there’s still plenty of time left to hit the beach or a backyard pool to cool off.

If you’re looking to spend some time at the lake or some other water-based environment, you’ll want to pack a speaker that’s designed to handle the situation. You’ll want to pack something from Ultimate Ears (UE).

We’ve recently spent some time in the pool “conducting research” on the two speakers from UE. We’re happy to report that both of them handled dips and dunks in stride and kept the tunes coming. There are a few differences between the two, of course, but either of them is a perfect solution for customers looking for a waterproof speaker.

The larger of the two, the Boom 2 is a cylindrical speaker that doesn’t occupy as much as space a roll of paper towels. It’s designed to stand upright with power and Bluetooth pairing buttons at the very top. On the front face is where you’ll find the volume buttons. Interestingly enough, the Boom 2 produces sound that seems to come from all sides of the speaker. Place it front and center on the patio, crank the music, and your guests will be dancing in no time.

Rather than go with a standard black or white color, UE designs the Boom 2 with vibrant colors that seem to pop and stand out. Moreover, it looks and feels like a party starter. The model we tested was Brainfreeze; other options include Tropical, Greenmachine, Cherrybomb, and more.

You might not suspect it by looking at it, but this speaker can withstand water up to one meter for thirty minutes. Yeah, that means your crazy friend can accidentally kick it over into the pool. It also means that a summer shower isn’t going to do anything to it, either. 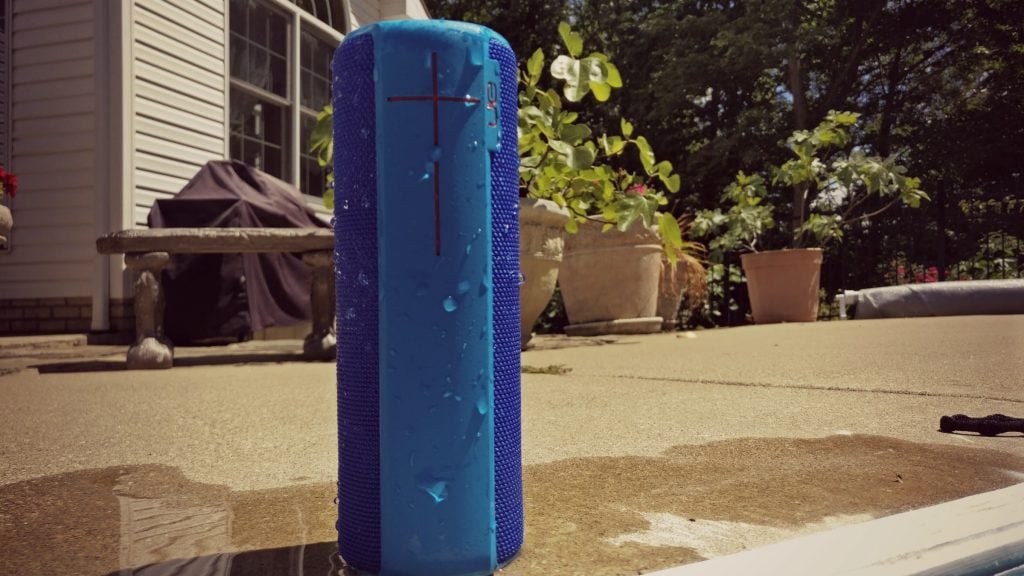 The internal battery is rated to play back music up to 15 hours, but that depends on how loud you like the tunes. We were highly impressed with the life of the battery as it went all day long and had plenty left over. Charging from empty to full takes roughly 2.5 hours. 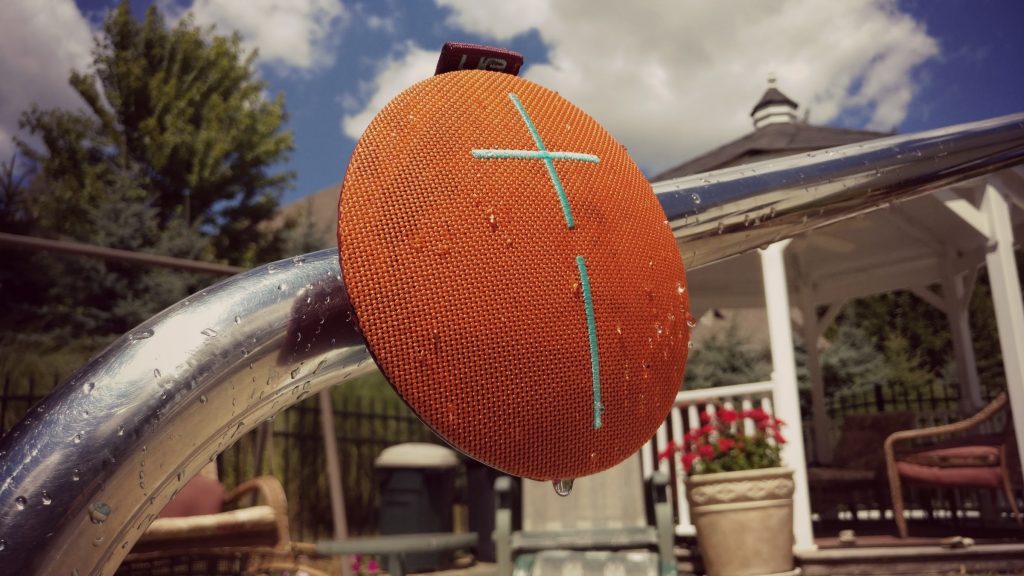 Lightweight and rather unobtrusive, the Roll 2 can go anywhere you go, especially if that means under waterfalls and into lakes. The backside of the speaker features a bungee cord and clasp which allows for easy clamping to your backpack, swimsuit, or handrail. Strong and secure, it keeps the speaker snugly connected to just about anything.

The Roll 2 doesn’t put out quite the powerful sound that the Boom 2 does, but we were impressed nonetheless. Really, when you think about it, you don’t want overpowering music right next to you anyhow. Nevertheless, it’s a robust and clear experience that livens up any atmosphere. You won’t have to go above mid-levels for volume. Much higher and it drowns out conversation. 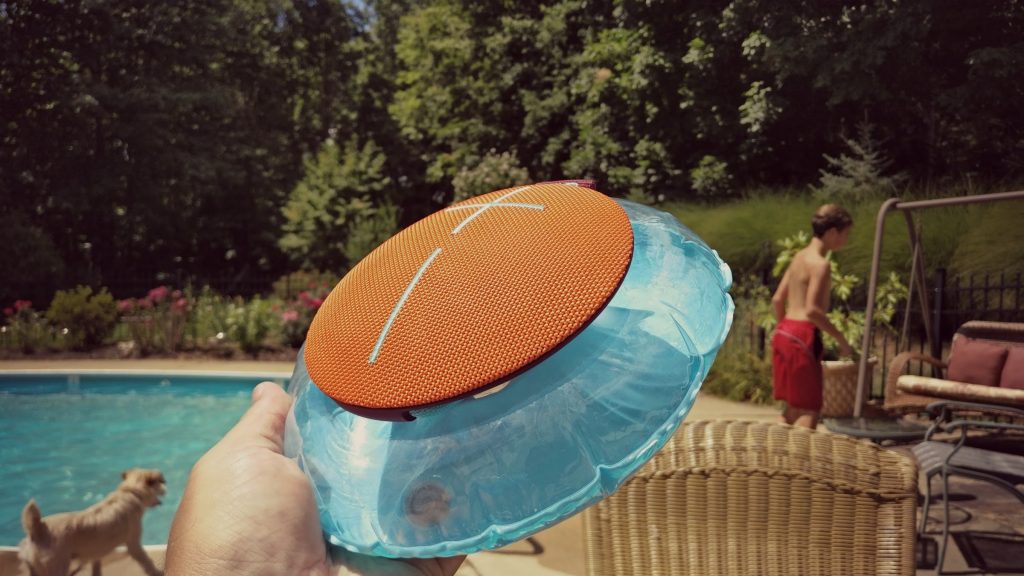 Like its sibling, the Roll 2 comes in pretty flashy colors which beg for attention. We tried out the Habanero model, but you can also pick up color combos such as Volcano, Sugarplum, and Reef.

Battery comes in at nine hours per charge with a longer 5.5-hour charge time. There’s enough juice to get through a typical shindig, but set aside more time for recharging. 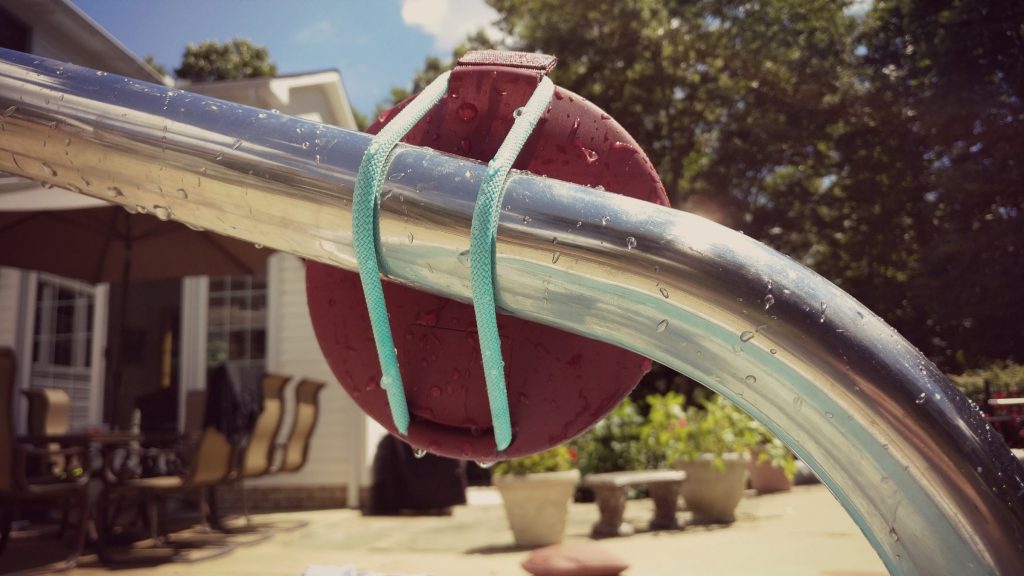 In addition to the waterproof aspect of these two speakers, the UE devices also have a few other tricks up their sleeves. For instance, download the UE app and you’ll be able to pair them for a true stereo sound. Heck, pick any two UE models and they can pump out music together from upwards of 100 feet away from the source. Further, you can connect up to two source devices at the same time.

A recent firmware update for the Boom 2 lets you tap into Google Now and Siri capabilities. Yes, just like you would get from your phone. A quick press of the Bluetooth button lets you switch playlists without getting your Android wet. Oh, and we also love being able to tap the speaker to work with tracks. The internal accelerometer lets users pick up the speaker and tap the top to pause and play music. Nifty.

The UE Boom 2 retails for $199.99 while the UE Roll 2 comes in about half the price, at $99.99. We are more than happy to recommend either one as you can’t go wrong. You’ll just need to figure out when and where you plan to use it. Go it alone and more intimate with the Roll 2 or double down with the extra features and louder sound of the Boom 2.

You can pick up either speaker at retailers such as B&H Photo Video, Amazon, Best Buy, Target, and Walmart.