I don’t know about you, but I never seem to be satisfied with the current audio solutions that I have. Right now, I have a decent receiver running the show, but it’s nothing special and it comes with its own challenges. Since I have a smart TV, I’ve been keeping my eye on Bluetooth products out there that might replicate or replace my receiver. Enter the Grace Digital BTTV 100.

Grace Digital, if you didn’t know them already, is known for really high-quality stuff. It’s Mondo+ is an example of a cool device packed with a ton features. The BTTV 100 seems like one of those devices too, high-quality with lots of features packed in. The whole idea behind the BTTV is to hook the Bluetooth receiver then place the BTTV 100 anywhere you want it. It still needs to be powered by a wall outlet, but if your TV is across the room and you want a speaker closer to where you’re sitting, this is supposed to solve this.

And yeah, I can see the utility there. If you have an older family member who may be a bit hard of hearing, putting one of these next to them instead of jacking the TV volume all the way up is an awesome solution. No-one wants to hear grandpa watching Jeopardy, right? 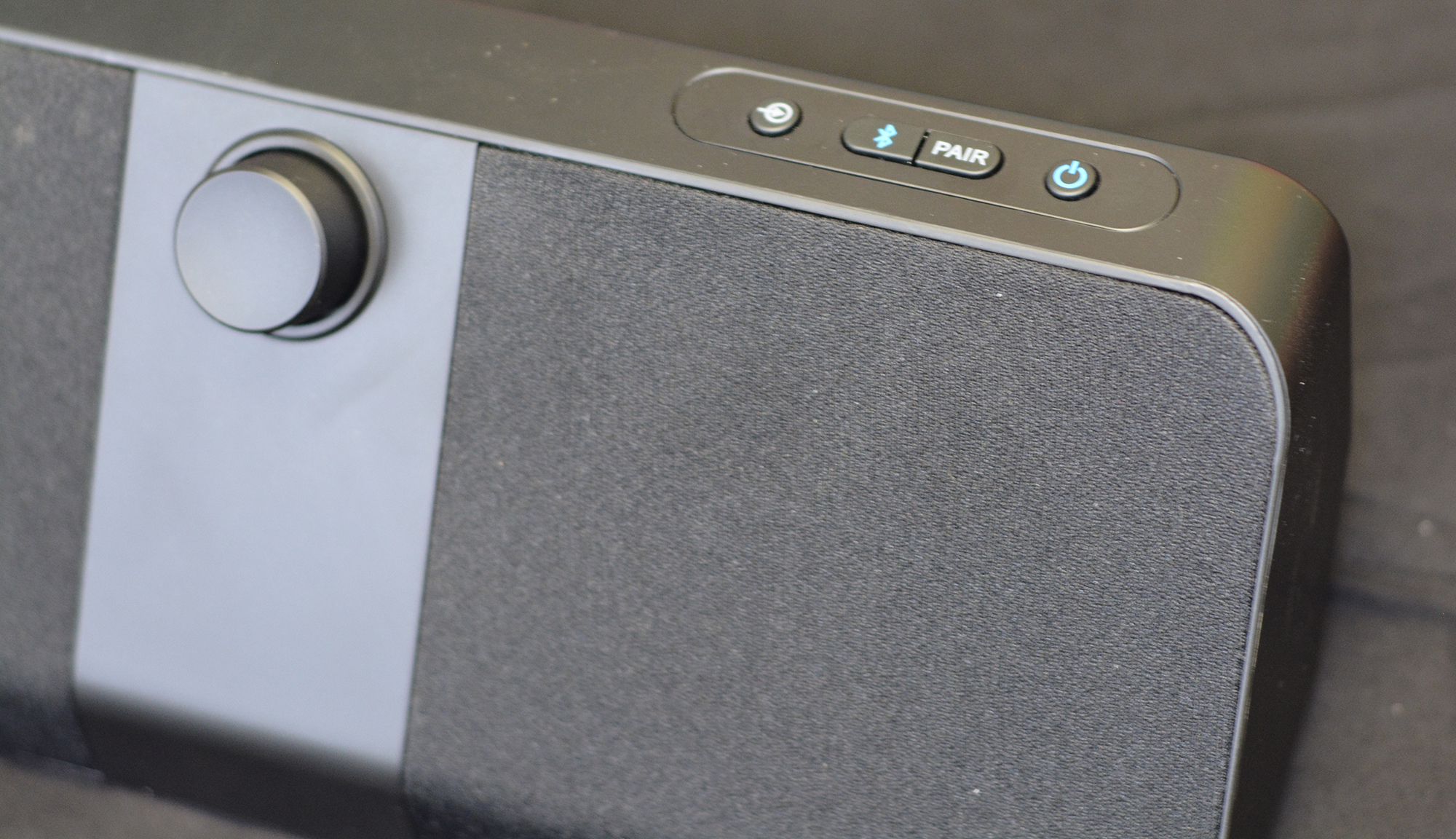 Setup, for the most part, was really easy. Plug the receiver into your TV, plug the speaker into power and pair them. After that, you can find your desired volume with the big knob up front or using the included remote. The remote, while not the biggest or sturdiest thing in the world, does let you control the volume, but also lets your play with the EQ of the device to fine tune.

After plugging the device in, I turned my TV speakers off and that was it. I was all set up. The setup was incredibly simple and I would feel comfortable with letting an older family member try it out with just the instruction manual.

Proper expectations are going to be important here. You shouldn’t walk into this thinking that the BTTV 100 is going to replicate the sound you’re getting from your Bose speakers or anything.

That being said, I think the BTTV sounds pretty good. Voices were definitely clear, and that’s something Grace Digital hangs its hat on. Big, over the top sounds like explosions, screeching tires, and breaking glass came through but seemed a bit muted. I don’t know if Grace is somehow limiting the loud noises to keep them closer to voices, but it definitely felt different than both my home theater setup and just using the TV speakers.

When you crank the bass, it can boom a bit. Again, this isn’t going to compete with standalone Bluetooth speakers that sit in the price range, but if you have one of these for your TV and decide to play some music through it, it’ll be a good experience.

So, there’s one huge issue that I knew would cause me to box up the Grace Digital BTTV 100 after my review period. The sync is off. When watching TV, you take for granted that you’re getting audio at the same time as the video. When you see someone’s mouth move, you expect to hear the audio at the exact same time. From my time working in television, I can tell you that even a frame or two (there are 30 frames per second in television) can make a noticeable difference. Unfortunately, I could never figure out how to get this thing synced up with my TV.

I’ve gone over the reviews on Amazon for the device and while only a few mention this type of issue, it is something you should look out for. One of the reviews mentioned a reboot fixed the issue, but I had the issue from the moment I turned it on until I turned it off, with multiple reboots in between.

I also had an issue with the speaker just refusing to work after a while. It only happened twice in the 20 hours or so that I used the speaker, but each time I would have to get up and pull the power and reboot the speaker.

I’d love to sit here and recommend the Grace Digital BTTV 100. I’m a big fan of the company and I love it’s outside the box thinking, but this one just doesn’t cut the mustard for me. The speaker is a fine speaker, but nothing exceptional and the issues I had with the it really kill any kind of enthusiasm I had for it. It feels like a first-gen product that I hope Grace Digital keeps refining until it gets it right.

We rarely review an old standard around here at...
Read more

The Up-Switch Orion is an accessory designed for the Nintendo Switch, with a little bit of added capabilities. Learn more in this review.
Read more

The Sunlu Filadryer S2 is a fantastic way to dry out filament for your 3D printer. It supports 99% of filament available, including PLA, PLA+, PETG, ABS, and more.
Read more
Advertisment

We rarely review an old standard around here at Android Guys. Like, AA and AAA batteries have been around for ages. Even...
Read more

If you're building a custom PC, you've probably been looking at the latest hardware on the market. Frankly, it will seem nothing...
Read more

The Up-Switch Orion is an accessory designed for the Nintendo Switch, with a little bit of added capabilities. Learn more in this review.
Read more

T-Mobile has re-introduced one of its most popular deals -- four lines for $100 -- for customers looking to save big on cell phone...
Read more

Some of the best deals occur during Black Friday and Cyber Monday periods for shoppers hunting for discounts. If you’re interested in hunting for...
Read more

A recent move by T-Mobile has immediately advanced the nationwide network with the Un-carrier lighting up Ultra Capacity 5G on 5G SA across the...
Read more

Matt Adamshttps://www.androidguys.com/author/matt-adams/
Matt is an avid sports and technology fan and Writer for AndroidGuys.com. You can get in touch with him by email at [email protected]
Advertisements