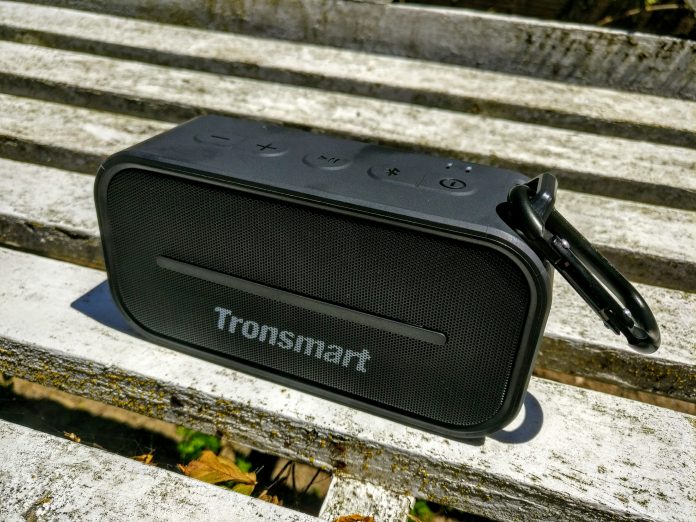 Let’s get this out of the way – Tronsmart’s Element T2 is not a sexy piece of hardware. It’s a basic Bluetooh speaker that offers solid performance, rugged durability, and lets you answer phone calls without having to pick up your phone. That being said, it’s well worth the $24 it costs on Amazon. Now that you’re properly warned of the perks and drawbacks of owning this little piece, let’s dive into what actually makes it tick. 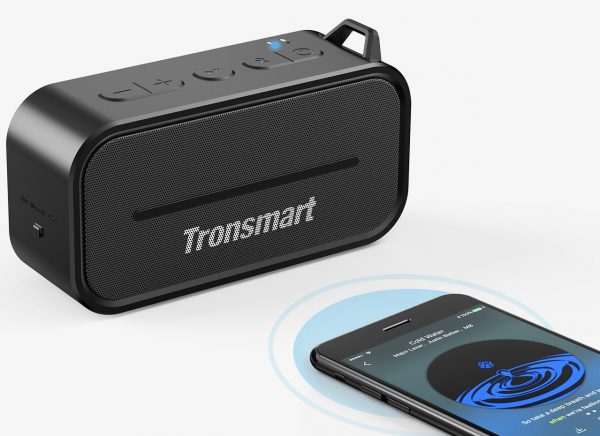 For not having any gimmicky features that are so prevalent in Bluetooth speakers these days, the Element T2 has surprisingly solid specs all around. Let’s start with the basics – Bluetooth 4.2 – while not the state-of-the-art Bluetooth 5 that’s coming into vogue, Bluetooth 4.2 still presents a number of excellent qualities of the more common 4.1 – most notably, a significantly reduced power consumption. A 1900mAh, 12-hour battery means you’ll probably not have to charge it for about a week unless you’re listening to music for hours and hours on end. 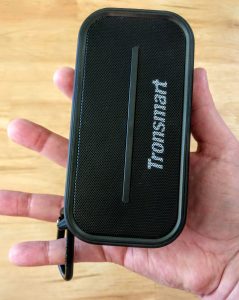 The Element T2 is hefty, for only being the size of a soda can. It feels solid, and the rubberized buttons, outer rim, and accessory compartment feel nice and durable. A small clip is built into the frame, allowing you to attach the included carabiner and carry it around with your with ease. Two small high-friction plastic “feet” are set into the bottom, ensuring that it won’t slip around easily.

A built-in microphone ensures that you won’t have to switch between your phone and the speaker when getting a call – especially handy if you’re in an environment where you’d be at risk of dropping your phone in water. And speaking of which, the Element T2 is Ingress Protection rated IP56 – meaning that it can handles heavy sprays of water (but not immersion) and is protected against dust and sand – making it a great choice for the beach.  A MicroSD slot, Aux port, and MicroUSB port are hidden under a rubberized flap on the side – do not, under any circumstances, forget to close that flap before taking this thing out in the wild.

I gotta be honest, here – this is easily one of the easiest-to-use speakers I’ve had the pleasure of using. Setup is ridiculously simple – powering the thing on immediately launches it into pairing mode, meaning you can power on and pair in about fifteen seconds flat. There are five buttons on the device; Power, Bluetooth, Play/Pause, +, and -.  The first three are pretty obvious, but the last two have a clever dual functionality; short-pressing each one individually raises or lowers the volume, while long-pressing either performs the Skip functionality.  Long-pressing the Bluetooth button allows you to pair a second Tronsmart speaker using TWS – True Wireless Stereo.

Sound on the Element T2 is loud and booming, with a bass that can be felt from a full inch from the speaker grill. The volume is considerable for such a little package – it surprised the crap out of me, honestly. This is where things get a little weird; while both sides of the speaker are identical and symmetrical, there is clearly a front and back to the thing. One side plays considerably louder and clearer than the other – presumably because the little subwoofer is partially blocking the other side. It’s not so bad that it affects the quality of sound coming from the speaker, but it is noticeable.

When it comes down to it, Tronsmart’s Element T2  is what it is – a solid, if unspectacular, sequel to the T1. It’s reliable, weathers the elements well, and doles out big sound in a small package. Get it on GeekBuying for $35 or on Amazon for $25.