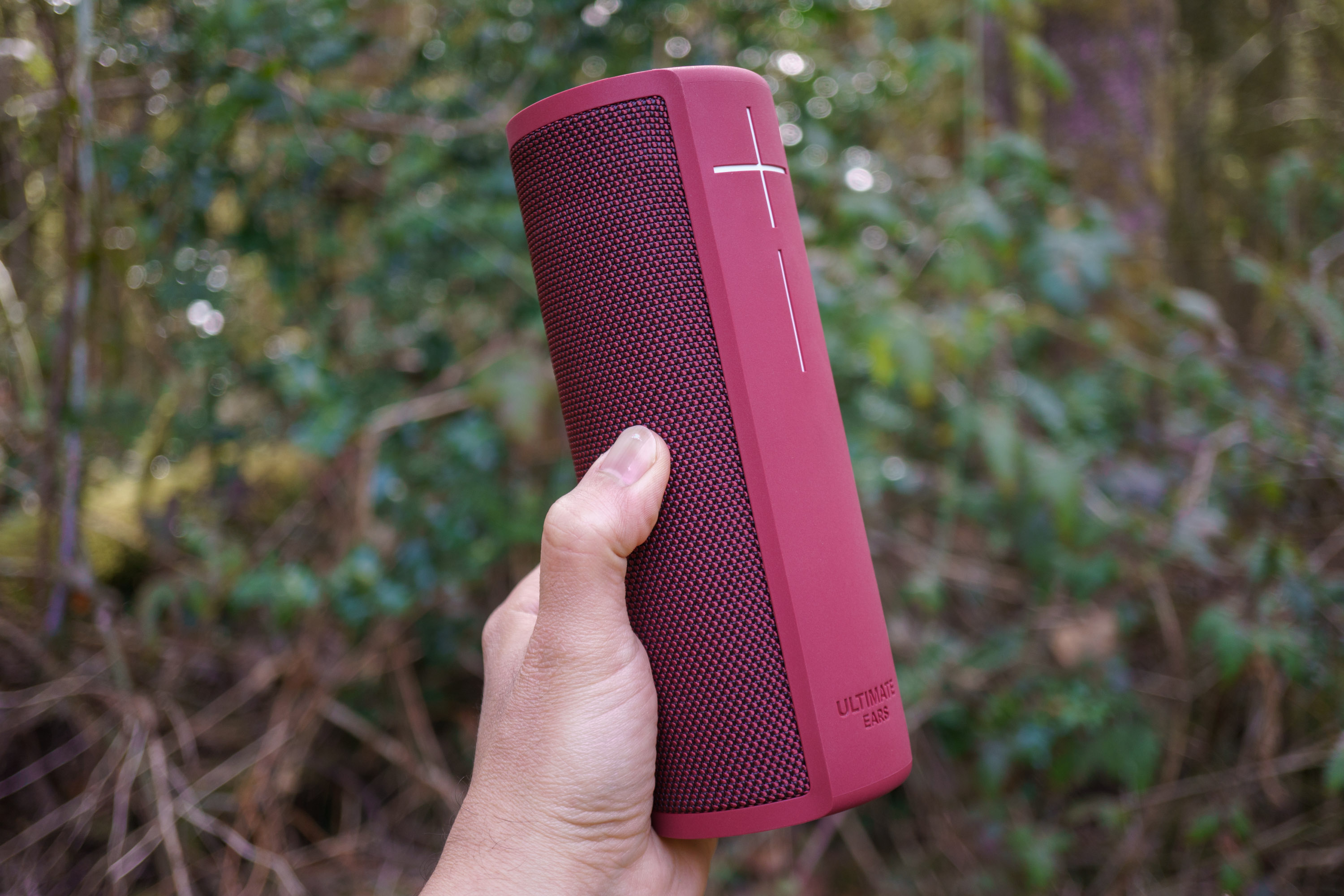 Ultimate Ears makes some of the best Bluetooth speakers (and headphones) out there. The UE Boom 2 and Megaboom really made an impact on us, and judging by the reviews on Amazon, we’re not the only ones.

We didn’t know how UE would come to one-up themselves, but now have the answer. The new Blast and Megablast are relative successors, which in a nutshell, introduce current smarts into a familiar package. This review will cover what the regularly-sized Blast is all about, and a look at the XL variant will come soon after. Let’s get rolling!

If you’ve gandered at one of UE’s Bluetooth speakers before, the new Blast will look pretty iterative. And deep-down, that really is the story. This isn’t necessarily a bad thing. There was nothing wrong with the original design – it worked excellently from both a functional and audio respect.

At a close look, UE did in fact incorporate a tweak here and there. The largest change is the size of the unit. Side-by-side with its predecessor, the Boom 2, the difference isn’t stark but visible. On paper, it’s a 1mm increase in diameter and 8mm in height.

The growth in size isn’t a significant con, but something to take note of if you carry your speaker in a small/tight bag. Smaller changes you’ll catch at a close look are the now flat-edged and slightly thicker plastic caps at the top and bottom of the cylindrically-shaped unit. The materials are still the same as before. The plastic is robust and rubbery in feel. The substantial thickness makes the device feel sturdy as heck. The same can be said of the super tightly weaved fabric that dominates the speaker’s exterior. 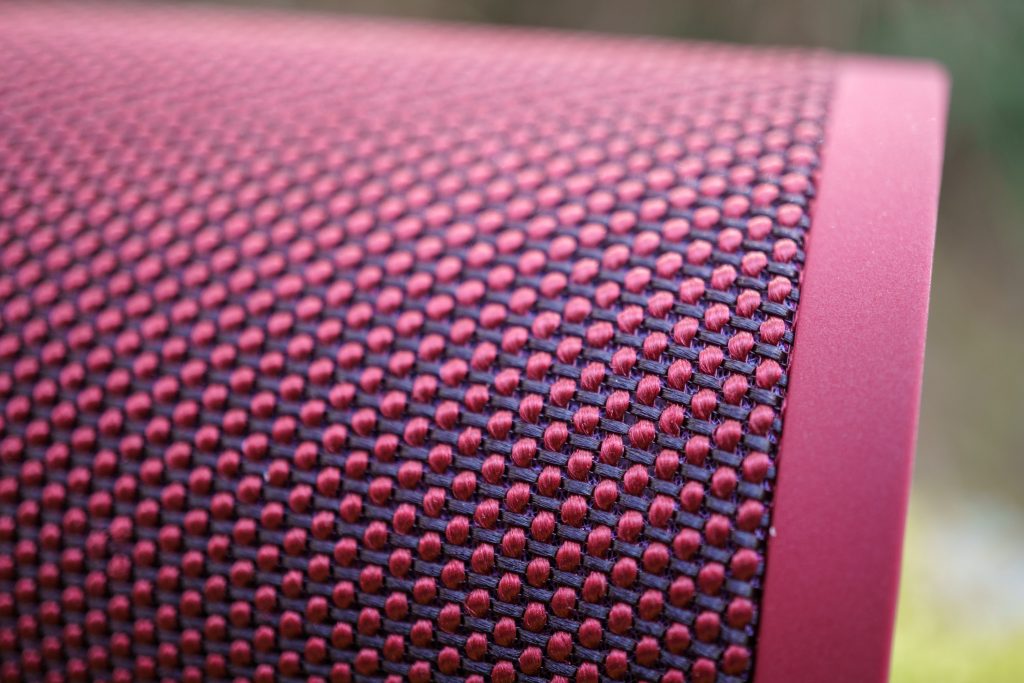 The arrangement looks similar to that on the Boom 2. The braiding is so tight that it feels like plastic in-hand. It efficiently gives the speaker ingress protection (IP67 water/dust-proof rating, to be exact) while still allowing audio to flow through.

Speaking of which, we’ve come to adore this 360-degree output from the cylindrical design. You don’t have to be strategic on where you place the speaker, unlike most of the single direction-firing speakers out there. And indoors, the sound bounces off the walls from multiple directions and fills out the space.

The exterior features of the Boom 2 are carried over for the most part, such as the extra large volume buttons on the side and the bottom attachment ring. The charging port still hides under a thick flap on the bottom (which is sadly still microUSB instead of the current USB-C standard). One thing that’s missing is the adjacent aux port for the optional wired input. UE is now going all-in with wireless.

New with the Blast is also an optional, custom dock that enables wireless charging. No, it’s not Qi, induction charging, but essentially the same practice. The pad has electrical pins that contacts an included metallic bottom attachment ring that you have to install. 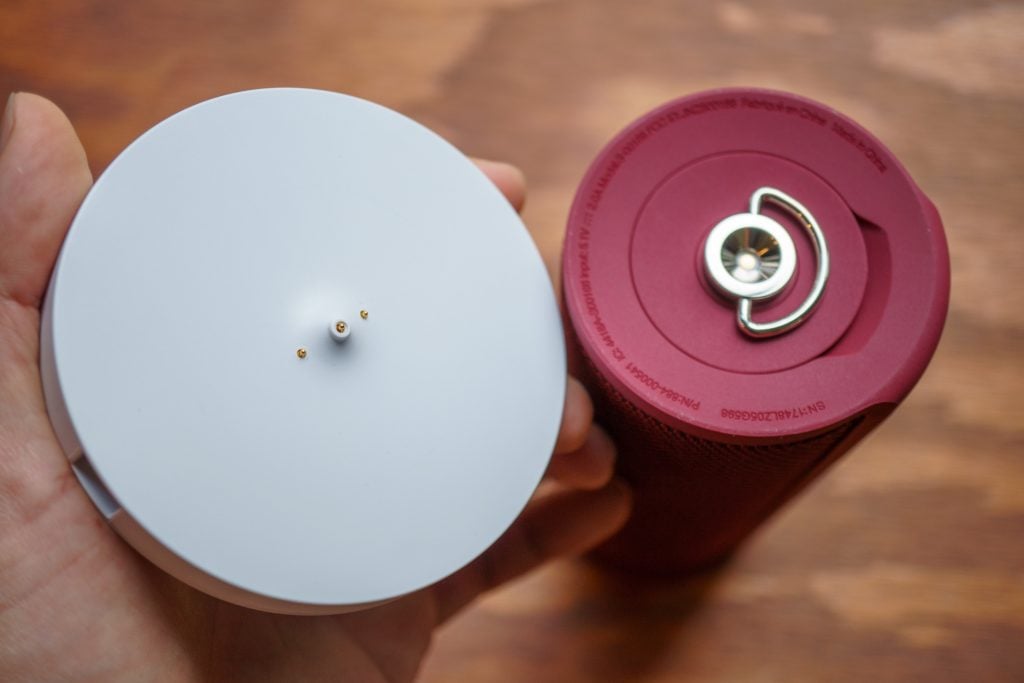 And that’s it. Simply plug in the dock with the charger supplied with the Blast and plop the speaker on top – just like a full-on wireless pad. There’s a tiny LED on the front of the pad to indicate charging status.

The unfortunate thing is that the dock doesn’t come cheap. A $40 price tag makes it a total luxury. It’s not that much more inconvenient to just plug in physically; we’re sure most people would rather keep the $40.

So if the design is essentially the same as before, what’s the purpose of this update? That question is answered from the inside. The Blast isn’t just a “Bluetooth” speaker. It’s now WiFi-enabled. This means that it can pull music from online sources all by itself, no mobile device dependency needed. Well…kinda.

For WiFi control, UE partnered with the popular Alexa cloud-based voice service from Amazon. The good thing is that ups the speakers competence from just a music player to a virtual assistant. Despite not being an Amazon-made device, it has full-on Alexa access. This means you can do all things like request information, update your calendar or todo-lists, order items, and vocally control your smart home.

There is a significant drawback, however, when it comes to music. You’re limited to what Amazon’s service offers, which is somewhat…limited. You can’t simply ask Alexa to play music from your Play Music or Spotify accounts. Alexa can only tap into Amazon’s streaming apps.

This is fine if you’re well-invested in Amazon’s ecosystem. But for the rest of us, we’ll have to revert back to the primitive Bluetooth audio method, defeating the purpose of this upgraded device.

As far as using the device itself, the Bluetooth functions is as simply utilized as before. It boots up in pair-mode; real easy to unbox and get playing. There’s a tiny button atop that you hold down to re-enter pair mode and connect another source. Battery life takes a small hit (probably because the extra tech), from a 15-hour rating to 12 – bummer.

The WiFi bit takes a little more effort, but still easy. UE developed an app in order for you to log into your Amazon account and start utilizing Alexa. The setup process is only a few steps, and the app is pretty basic. Bear in mind, the app is primarily for establishing the speaker and Amazon link; it’s not something you’ll be using regularly.

The integration of Alexa is done well. It essentially functions like an Amazon Echo or Dot smart speaker would, with Alexa summoned vocally to respond to or execute a vast array of inquiries. In this case, you’ll primarily be using the service to play music, and it does so as advertised.

We must mention that we observed some iffy connection reliability, which wasn’t present at all in the old model (in our experience). At times, playback via Bluetooth would just stop and we would have to re-pair. It seemed to happen more when the music was buffering. Streaming through WiFi wasn’t exempt from the issue either. The drops didn’t happen enough to drive us mad; just a minor annoyance.

It’s important to note that UE can administer updates through their app, so it’s possible that the connection concerns get addressed that way. 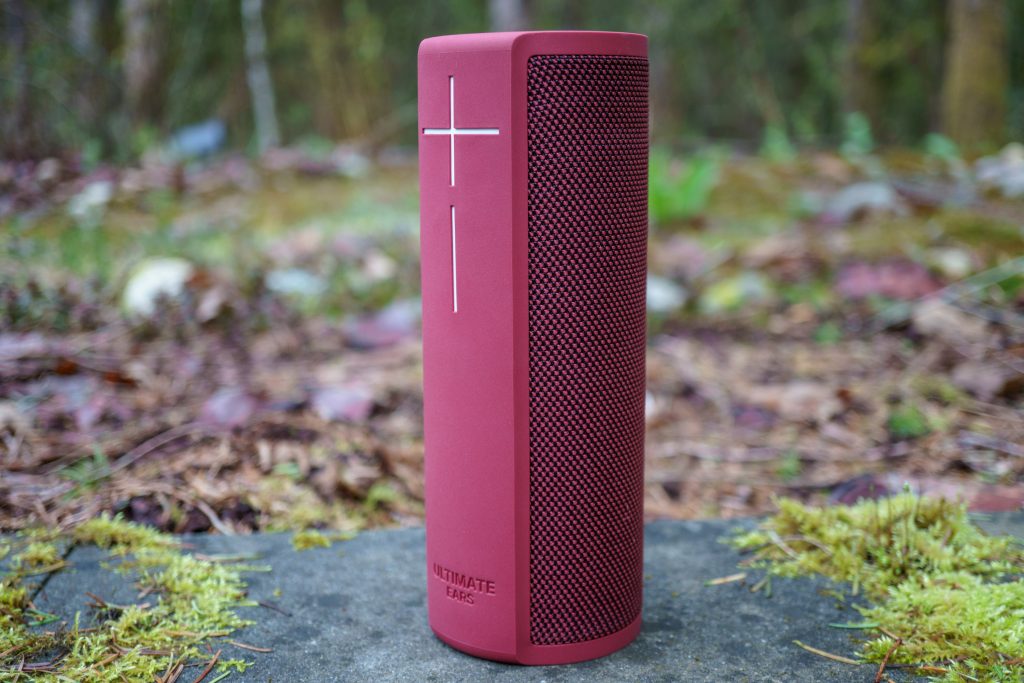 The speaker’s internal updates weren’t just limited to functional additions. We adored the audio quality of the Boom 2, but still saw how it could be improved. The most noticeable tweak is the tamed bass. The Boom 2 leaned on the boomy side (go figure), which was sometimes overpowering. The Blast’s sound is more balanced and cleaner on the low-to-mid ranges.

Bassheads will prefer the former; the Blast’s bass is lighter in comparison. But this doesn’t mean it’s of lesser quality. There’s still plenty of punch and sub-bass depth to appreciate. The magnitude is now really determined by the track. As an audiophile, I much prefer this cleaner and refined reproduction. It gives the full-bodied mid-range a better chance to shine. Vocals, in particular, are tonally excellent and engaging, especially when you have the 360-degree sound filling the room.

The treble range is equally rich. It doesn’t have perfectly crisp extension and detail, but it’s well done and one of the best for a portable speaker of this class. Same goes for clarity on a whole. We can see how it can still be improved upon. We feel like UE tries to strike the best balance with power and sharpness, and they’ve done a great job. 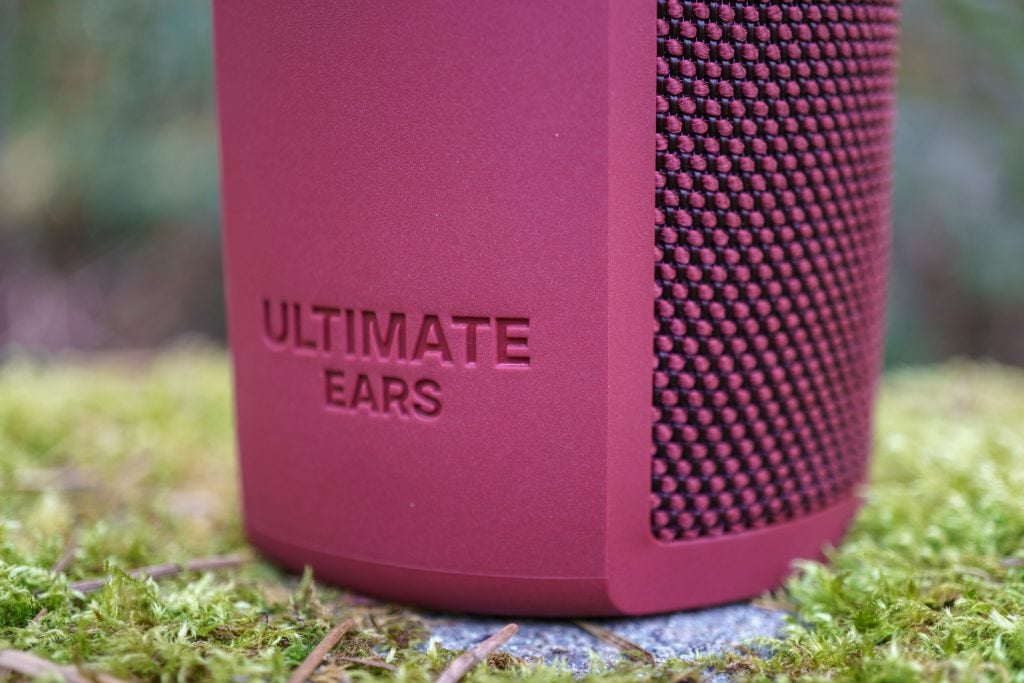 The UE Blast isn’t as easy as a recommendation as the Boom 2 was. Not saying it’s not an excellent wireless speaker – most of my expression for it has been positive. It’s just that it doesn’t bring a lot to table from the Boom 2. The design is the same, for all intents and purposes. While the sound is noticeably refined, it’s not a big change – certainly not worth the upgrade if that’s the main reason.

What the Blast really has on the Boom 2 is the WiFi and standalone capabilities (along with Alexa support), but it comes with a big caveat. Amazon’s streaming service support is limited, not having access to many popular music apps. Alexa’s abilities are certainly helpful, but this is first and foremost a music-playing device.

We also can’t ignore the substantial price difference between the new and old models. The Boom 2 is about half the price of the new model. It’ll be up to you if the Blast is twice the speaker.