Most of us love music (if you don’t, I’m very sorry for you). Tastes may vary, but we all like a good tune every now and then. When we want to listen to music at home or on the go, it’s important to be able to do it on a good speaker and unless you’re rocking an HTC One M series phone, Moto X, or Nexus 6P, you’re probably looking for something better than the speakers on your phone.

Ultimate Ears has an offering that’s really hard to pass up when it comes to pure speaker quality and loudness; they call it the UE ROLL. 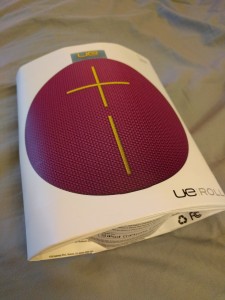 Upon removal from the packaging (rolled cardboard), my first impression was that this is a very attractive and modern-looking speaker. The colors are very appealing and you quickly realize that even though it doesn’t look like a boulder with an OtterBox case on it, it’s actually a very rugged device. I don’t recommend running it over with your monster truck, but it feels like it might actually survive being run over.

As noted in the spec sheet below, it’s IPX7 rated, which means it can be completely immersed in water up to one meter deep for up to 30 minutes. Again, I wouldn’t necessarily recommend trying to drown it, but you can certainly take it with you to the shower or the beach without having to worry. 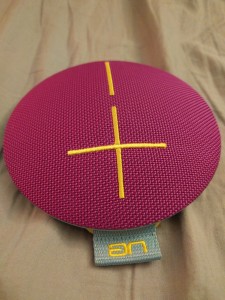 When I started playing music, I noticed how clear and beautiful the sound was and how it doesn’t distort when you turn it up to full volume. The loudness is also very impressive for what it is. I found that keeping it at full volume for too long was going to probably upset someone around me, which for something of its size is pretty amazing.

As far as the tuning is concerned, I’d definitely say it sounds better in the mid-range to high-range sounds. UE advertises it as being a pro with the lows and it even has a “bass jump” mode in the built-in equalizer, but it didn’t really impress me much in that department.

The front of the UE Roll is very stylish. It didn’t actually occur to me at first though, that the stylish design is actually very functional. The front of the speaker has giant +/- buttons on it to control the volume and I was very pleased by that. After that the fun ends. The buttons can’t be long-pressed to get any additional functionality (such as skipping or repeating a song) and there’s no way to pause/play the music without your phone in your hand.

However, if you have your phone in your hand, there are a bunch of other things you can do to control the speaker with its companion app!

Overall, the companion app is rather scant, but what do you really expect from a companion app to a Bluetooth speaker? In addition to giving you information about the battery life of the speaker and allowing you to control the equalizer, it has an alarm feature and gives you the ability to pair a second UE ROLL to create true stereo sound. You can also update the firmware on the speaker via the app, which adds the latest features including new equalizer presets and “Block Party” mode, which allows multiple people to connect to a single UE Roll and create a queue together. This a really cool feature in its own right (the owner still holds the power of veto, as it should be).

What I found to be most impressive about the app is actually one of the simpler features. The ability to control the power of the speaker from the app is really useful. It’s nice not to have to physically manipulate the speaker just to turn it on/off. What that also means is the speaker can be powered off when you have the alarm set, and it will power itself on and start playing music when your alarm goes off. My only problem with this feature is the phone doesn’t disconnect from (and power off) the ROLL after you dismiss the alarm. It would be good to include this in a future software update.

Waterproof: IPX7 rated: UE ROLL can be immersed in liquid up to one minute for up to 30 minutes.

I found the UE Roll to have exceptional sound, especially for the size that it is. It’s definitely a little pricey, but I’ve never seen anything like this before: something with such bold sound, that’s so portable, has great battery life, and you can take it to the beach because it’s okay if it gets wet.

More of the value of this speaker comes from the companion app and its ability to make a simple Bluetooth speaker into the life of the party. Pick one up today at Verizon and save 20% off of full price.