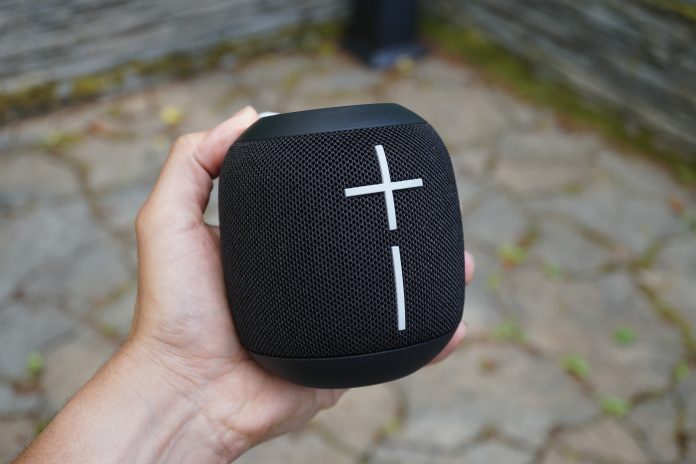 Most of us picture a slim cylinder when we think about Ultimate Ears portable wireless speakers. This has been the company’s signature design from the original Boom series to the newer Blast and Megablast. But UE also offers a smaller and cheaper alternative, which which hasn’t gotten as much attention. Maybe this is why the follow-up to the Roll 2 has seen the biggest change.

The new Wonderboom now more closely resembles its bigger brothers, with a cylindrical, 360-degree driver design and similar aesthetics. But at roughly half the size, can this more travel-friendly option carry the same prowess, or are there too many compromises? We’ll examine it in this review.

Rather than the disc-shape of the Roll 2, the Wonderboom is more recognizable as a tradition UE Bluetooth speaker. It essentially looks like a shorter version of it. However, side-by-side, we see that the Wonderboom does have a bit more girth – about 50% more width.

We imagine this is to be able to fit all the internal components in the significantly more compact size. This makes the speaker look less cylindrical and more ball-shaped.

Otherwise, the construction is very similar. We have a super tightly weaved fabric completely around the speaker (enabling the top-notch IPX7 waterproof rating), and symmetrical top and bottom, chamfered, rubbery plastic caps. It’s a minimal design that just works. In-hand, everything feels tough and tightly constructed. This is a speaker that will be unfazed by tumbles and last a long time.

Unlike the Blast line, the Wonderboom is strictly a simple Bluetooth speaker. It doesn’t have WiFi connectivity or Alexa assistance. You just turn it on, pair to your mobile device, and play.

And the setup process is just that easy. The Wonderboom has the same controls at the top as we’ve seen before – a power and dedicated pairing button, both with their own small status LEDs. A feature we’ve loved in the past is the ability to log in up to eight different sources, and that’s maintained here (long-press the pairing button to set it to Search mode).

Additionally, like in UE fashion, the charging port is protected behind a substantial flap on the bottom. As opposed to the folding flap of the larger speakers, this one is attached at a point by a rubber stem, allowing the flap to rotate out of the way. We have a slight concern that the seal doesn’t feel as robustly locked in as on the Boom or Blast series (it’s easier to release than we would like), but we can’t report any instance of it opening on its own. Just make sure that you push and seat the flap properly before going for a dip.

Something missing from the Boom series is the aux port. This was an alternate method to getting music to the speaker, via a 3.5mm wired connection to a source. Its absence is understandable. The main use of this speaker is wireless audio, and there’s limited space here.

One may think that half the size means half the power. Fortunately, that’s not exactly the case here. For instance, the battery life is down by a third (10 hours of playback vs. 15 on the Boom 2). The Bluetooth range is still an outstanding 100ft. What’s probably the most impressive is that there’s still an array of four audio drivers (two main active + two low-end passive), and they’re not that much smaller than on the Boom 2 (40mm vs 45mm active drivers, and 46x65mm vs. 45x80mm passive, respectively).

Based on the specs, we were really interested to see if the Wonderboom’s sound could hold a candle to its larger brother. In a couple ways, it does. This is the strongest speaker we’ve heard at this size.

Per the “Boom” moniker, the Wonderboom does bring it. Bass is its shining quality, excellently pumping out as much definition as power. Though, some of its strength does drop off in the upper mid-bass. This allows for the mid-range to not be overtaken, but the trade-off is a lack of mid-bass oomph.

Speaking of the mids, vocals are surprisingly large for the speaker’s size. Overall, the mid-range can be a mixed bag. It all has nice body and definition overall, but some parts can show as slightly recessed. The treble detail is nicely present, even when a lot is going on in the track. However, the resolution of higher frequency bits noticeably drops off and the reproduction can be loose.

As expected, there isn’t as much volume headroom as in UE’s larger variants. Still, the Wonderboom punches well above its weight in this respect. We’re able to fill a living room space a couple notches from its max, so while it won’t necessarily rock the house, it will be suitable for causal use. The 360-degree output serves it will for an expansive sound. It’s not as full/surrounding as the Boom or Blast, but gets the job done.

Overall, we’re impressed with what UE was able to do with the Wonderboom’s limited space. There’s much less compromise than one would expect from the significantly smaller size. The Wonderboom also costs a good chunk less than its counterparts, making it a terrific value. Though, we wouldn’t go as far as to say there isn’t reason to not opt for the more powerful models. They do have more headroom for volume and fullness. It depends how you’re going to primarily use the speaker. The Wonderboom shouldn’t be underestimated, though.