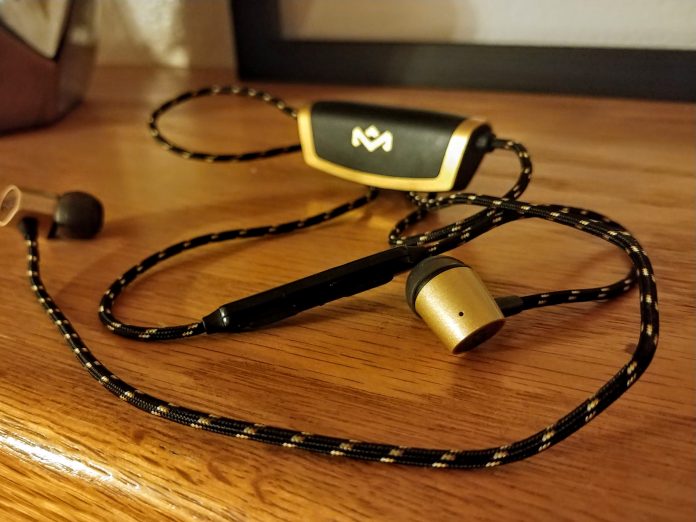 The House of Marley is an audio company that operates under the principles of superior quality, sustainability and a commitment to charitable causes. It uses mindfully sourced wooden accents, recycled plastic and aluminum to make all of its products; House of Marley will plant a tree for every product purchased. With that in mind, we took its Uplift 2 Wireless Headset out for a spin. 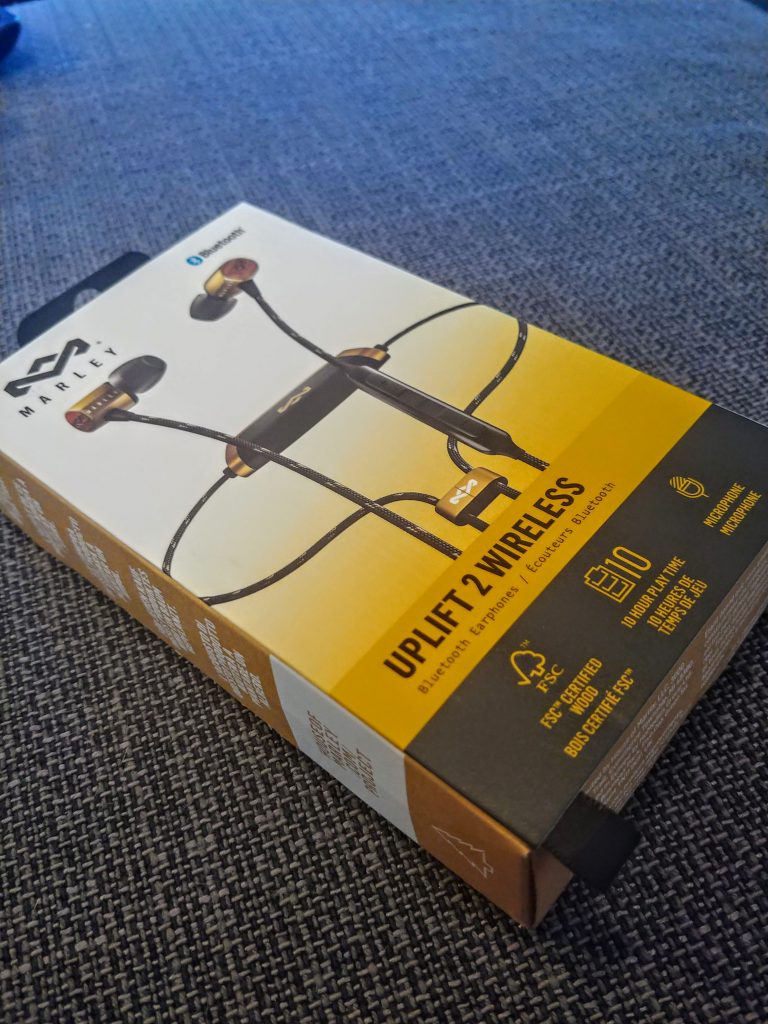 Normally I don’t talk about packaging too terribly much. I prefer to let the product speak for itself rather than focusing on the box it comes in, generally. But the Uplift 2’s packaging has a couple quirks that I think are worth mentioning. First, it’s completely recyclable; once you take it out of its package, you can just dump it into the recycle bin. Second, printed on the right side of the box is a message: “the purchase of this product will help plant one tree.”

While that’s a nice movement and sentiment, I feel it could have been taken a step further. Why not make the box itself plantable? Make the box out of cornstarch or something similar. Embed a small seed packet. Rather than letting us take the word of a manufacturer that they’ll plant a tree, let us plant one ourselves.

The Devil in the Details 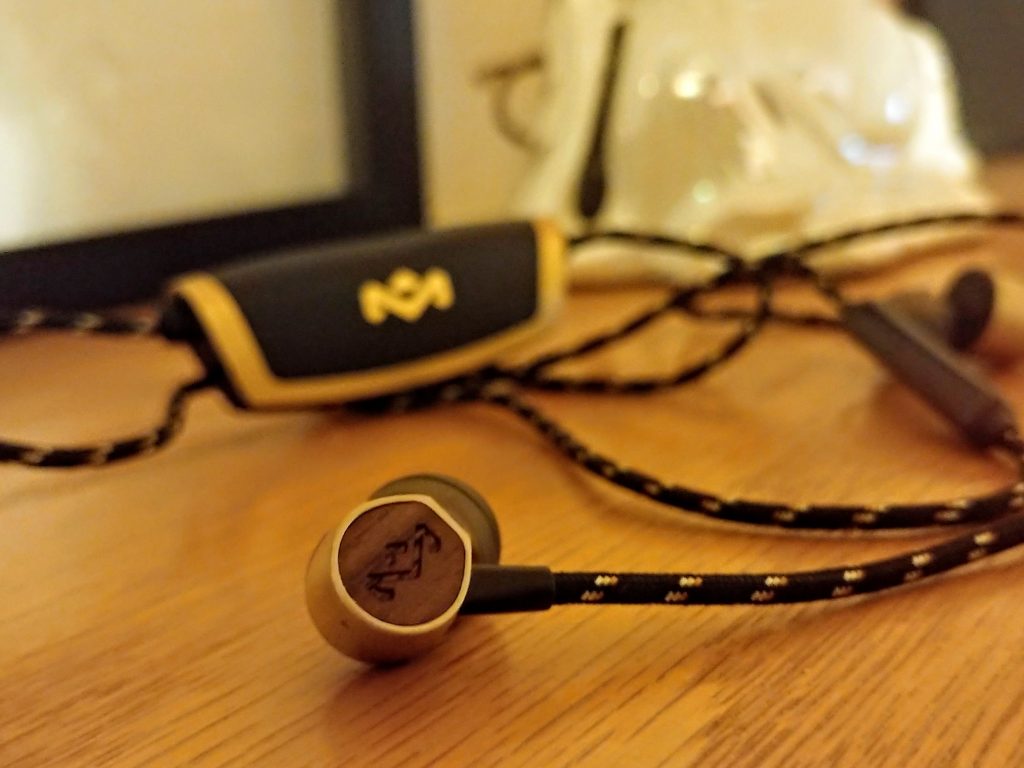 Undoubtedly – and perhaps intentionally – the Uplift 2’s strength is in its aestheticism. With an all-aluminum gold chassis (with real wooden accents!) and a soft, braided cabling, Marley’s headset really cuts a striking figure.

And really, it’s the small details that make it pop. A magnetic clasp emblazoned with the Marley logo secures the cabling around your neck, so there’s no risk of it falling off. Each earbud is capped by a wooden accent plate engraved with that same logo.

The connector at each end of the cable is wrapped in soft rubber, reinforcing the connection. And while the “puck” that connects the two buds is plastic (albeit with an aluminum border), it doesn’t feel cheap. The MicroUSB port has a rubber cover, concealing it from view, and the three-button control panel hanging from the left bud is sleek and understated.

Of Wireless Standards and USB Ports 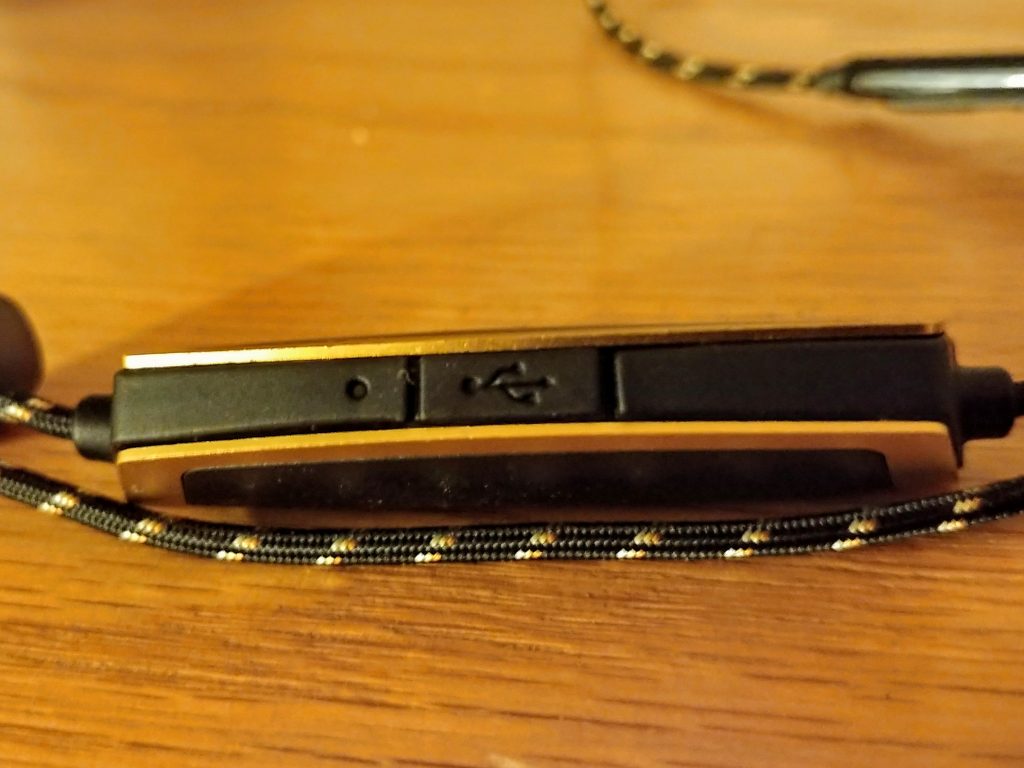 Most American-sold smartphones these days, especially flagship phones, use a USB-C port for charging. Almost none of them still use microUSB. As such, making accessories that still use the old standard comes across as cheap and out of touch. In the same vein, a Bluetooth accessory that ships with Bluetooth 4.1, three versions behind the new Bluetooth 5, comes across as very much outdated.

While the visual and tactile design of the Uplift 2 is fantastic, the design language is not. It looks great and feels great, but falls short under the hood.

Powering on the Uplift 2 is an easy affair, once you know how to do it. It took me an embarrassing amount of time for me to figure out that I needed to press the center button on the control panel to turn the thing on.

You’re welcomed by a cheerful little jingle, unlike many cold, robotic beeps you get from similar products. Oddly though, when you receive a call you get that exact robotic beeping. The headset immediately jumps into pairing mode, characterized by red and blue LEDs on the “puck.” Discovery and pairing was seamless and effortless, and reconnected with ease on subsequent uses. 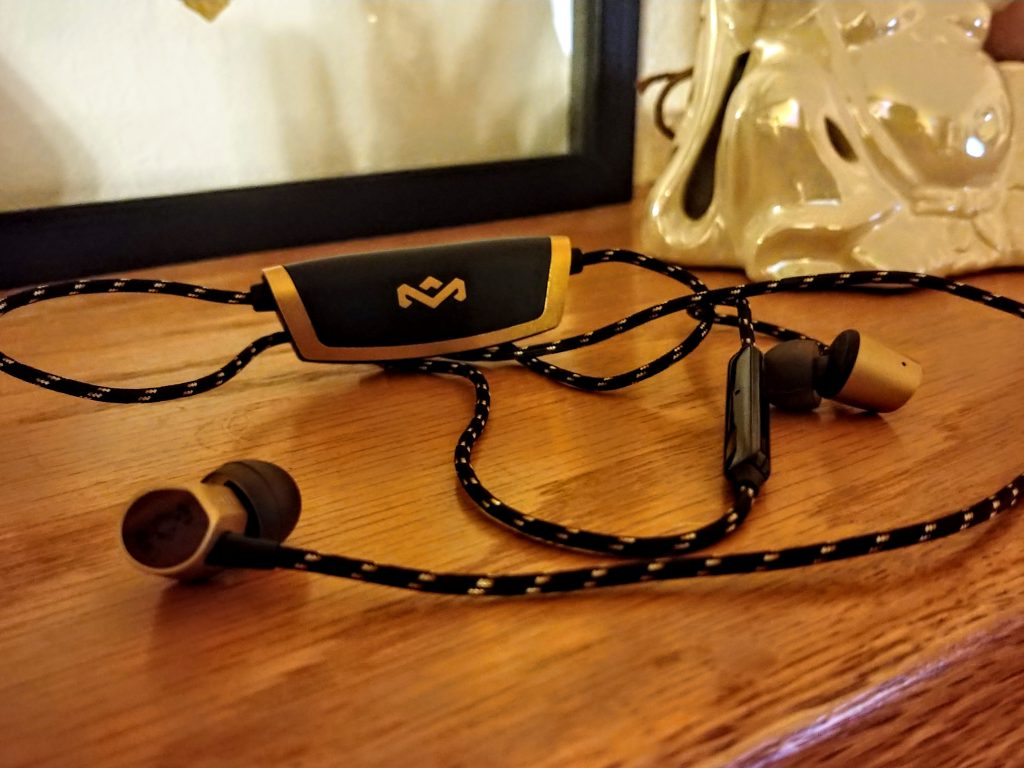 The clarity of sound and levels of the Uplift 2 are quite impressive. Sound is immersive and complex, without the muddied feeling you get from many headsets. While the bass is disappointing, as it often is with Bluetooth headsets, the depth and richness of sound is a delight. Sound quality in a call is perfectly adequate, and the mic built-in to the control panel is acceptable, though not wonderful.

With a ten hour battery life, the Uplift 2 will almost always provide you with a full day’s use. It takes two hours to recharge from 0%, so if you’re a heavy user you’re probably best off charging it between uses. It’s not a small battery, per se, but it’s small enough to be aware of it.

At $79.99, House of Marley’s Uplift 2 is not quite a budget headset. With its aluminum chassis, wooden accents and braided cables, it has a premium build. And, with its antiquated connection standards and disappointing bass, it struggles to be a truly high-end Bluetooth headset. As such, it’s hard to justify that price based on performance. If you highly value aesthetics and a good-looking device, though, it might be for you.

The Uplift 2 is available from a number of retailers, including directly from House of Marley and Amazon.