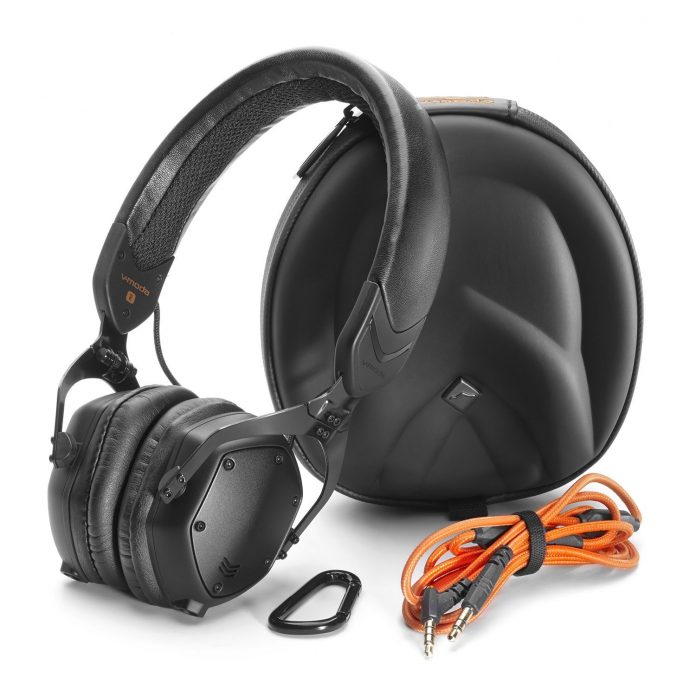 V-MODA has managed to position itself well with headphone enthusiasts. Its determined attention to detail, slick styling, and engaging sound is a formula that works, reinforced by competitive pricing. And landing around $200-$300, its headphone range is no where as far-fetched as a lot of audiophile headsets that tread closer to $1k.

In the past, we reviewed the company’s latest over-ear and in-ear solutions, the Crossfade Wireless and ZN, respectively. We were thoroughly impressed with what you get for the money. So for completion, we’re reviewing V-MODA’s newest on-ear as well, dubbed the XS. On-ears offer greater portability compared to over-ears, and the XS knocks on the compactness limit more than any other I’ve seen. Let’s check it out now.

The build and styling of the XS is not a departure from what we’ve seen from its bigger brother or predecessor, the M-80. This isn’t a bad thing; it’s not like it’s dated or doesn’t work. The XS is totally a refinement, incorporating some worthy improvements. One of these is collapsible design.

The considerably compact footprint of the XS is immediately noticed when opening the packaging. It comes folded up in V-MODA’s included hard shell case, which bears an exoskeleton aesthetic, feels tough, and is small enough to fit in the palm of your hand. Opening it simply reveals the tightly folded headphones and audio cable.

Being on-ears, the XS are essentially a shrunken version of V-MODA’s over-ear flagship. The same materials are carried over: a leather wrapped headband with meshed fabric inner lining (for comfy head support), metal stems with sturdy CliqFold hinges, leather cushioned ear pads, and even the company’s customizable plates on top of the ear cups.

The XS comes in either Matte Black or White Silver. Pretty much everything on our black model is Batman-style, with the only thing not covered in a black finish is the orange cable (even the carrying case is black). And speaking of which, the braided cable feels as sturdy as the rest. V-MODA says it’s tested beyond military-level quality standards, able to withstand over 1 million cable bends. It has an in-line mic and one-button remote, and ends with a gold-plated, 45-degree angle 3.5mm jack.

The cable is not only removable, but it can be placed on either ear cup. There’s a port to accept it on the bottom of each ear cup. Not all headphone give you a detachable cable, and much fewer give you a preference on the side you want it.

The XS is an on-ear headphone, so the ear pad lays on top of the ear as opposed to around them. This style isn’t for everyone, so make sure you know what you’re getting into. V-MODA makes the right cues to make the wear as comfortable as possible, such as the supple and substantial ear pad cushions and minimal clamping force, but it’s still susceptible to a growing earache over a lengthy listening session. Although, I’m convinced this is among the best on-ear out there in this respect.

A unique thing about the XS is the shape. The sides of the headband are flattened so that it makes a tighter fit on your head, an effort which V-MODA deems as Mind the Gap. This was a smart move, as it distributes the headphone’s weight along your head instead of the very top (potentially causing a pressure point) and it allows the folded footprint to be so compact. There’s little unused space when the XS is collapsed.

On-ear headphones aren’t the best type of headset in terms of isolation, and the XS are no exception. They’re not bad relative to the on-ear competition, but the padding of over-ears, which engulf the ear, are significantly better in keeping external noise out. I think more clamping force could’ve helped a bit more, but then comfort would’ve been compromised; this was probably a back-and-forth V-MODA went through.

Although the XS takes after the larger M-100 flagship, it’s quite different in sound. I don’t mean this in a bad way; it’s actually a maturation to my ears. The sound signature of the M-100 was a tad too V-shaped for my taste, although, I won’t deny that a bangin’ bass and treble made for a fun experience. The XS is more balanced, but fortunately, still delivers V-MODA’s engaging tunes.

The mid-range is now the star of the show. Guitar strums and vocals are lush and airy, instantly pulling me in on the first listen. When the right moments hit, they can result in a moving presence, especially when vocals take center stage. And when you have a bunch of elements playing at the same time, like in a full-on rock song, you’ll be impressed how encompassing the XS’ small drivers can be. They punch above their weight.

Treble is right behind the mid-range. It’s rich, clear, and detailed. Don’t expect the bass to be as strong as the M-100, there’s only so much on-ears can do. That said, it’s still a bold V-MODA bass response. The XS also can’t pull the magnitude of soundstage that over-ears can, but what there is, is impressive for the headphone’s size.

The XS are an impressive pair of on-ears. There’s so much going for them: durability, style, ergonomics, and sound quality. Practically all the cons that we noted are just from the fact that they are on-ears. There’s only so much you can do with isolation and comfort.

We’re really glad that the focus on quality continues onto the sound. V-MODA knows how to get our attention, and despite shrinking the drivers, the XS still delivers a wallop.