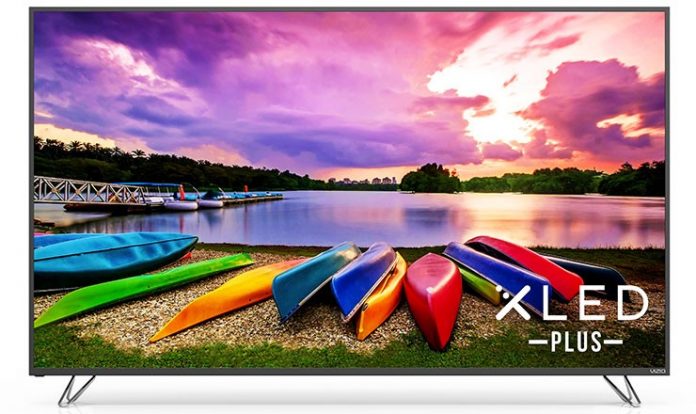 Editor Note: Our review unit was provided to us at no cost and we were allowed to keep it upon publication. This did not color our scoring or impressions of the product. Our staff makes every effort possible to stay objective in reviewing.

As a site that focuses Android and smartphone-related technology, we’ve seen our scope of coverage widen quite a bit over the last decade. What used to be just just headphones, cases, and chargers has expanded into a whole new world of products and accessories.

Now we cover smartwatches, wearables, and other tech that didn’t even exist until a few years back. Take, Google Chromecast, for instance. It was not all that long ago that these little dongles and built-in smarts were just a concept. Today, though, it’s everywhere. It’s built into speakers and monitors and considered an industry standard.

We were asked by Vizio to review one of its latest displays (TVs) because a key selling point was its internal Chromecast capabilities. Moreover, it offers Google Home and Google Assistant technology, something that’s also becoming increasingly present.

Billed as a display and not a TV, the Vizio M50-E1 is, for all practical purposes, a 50-inch television screen. As to why it’s not a “TV” in Vizio’s eyes, it’s because there is no internal tuner for over-the-air broadcasts. 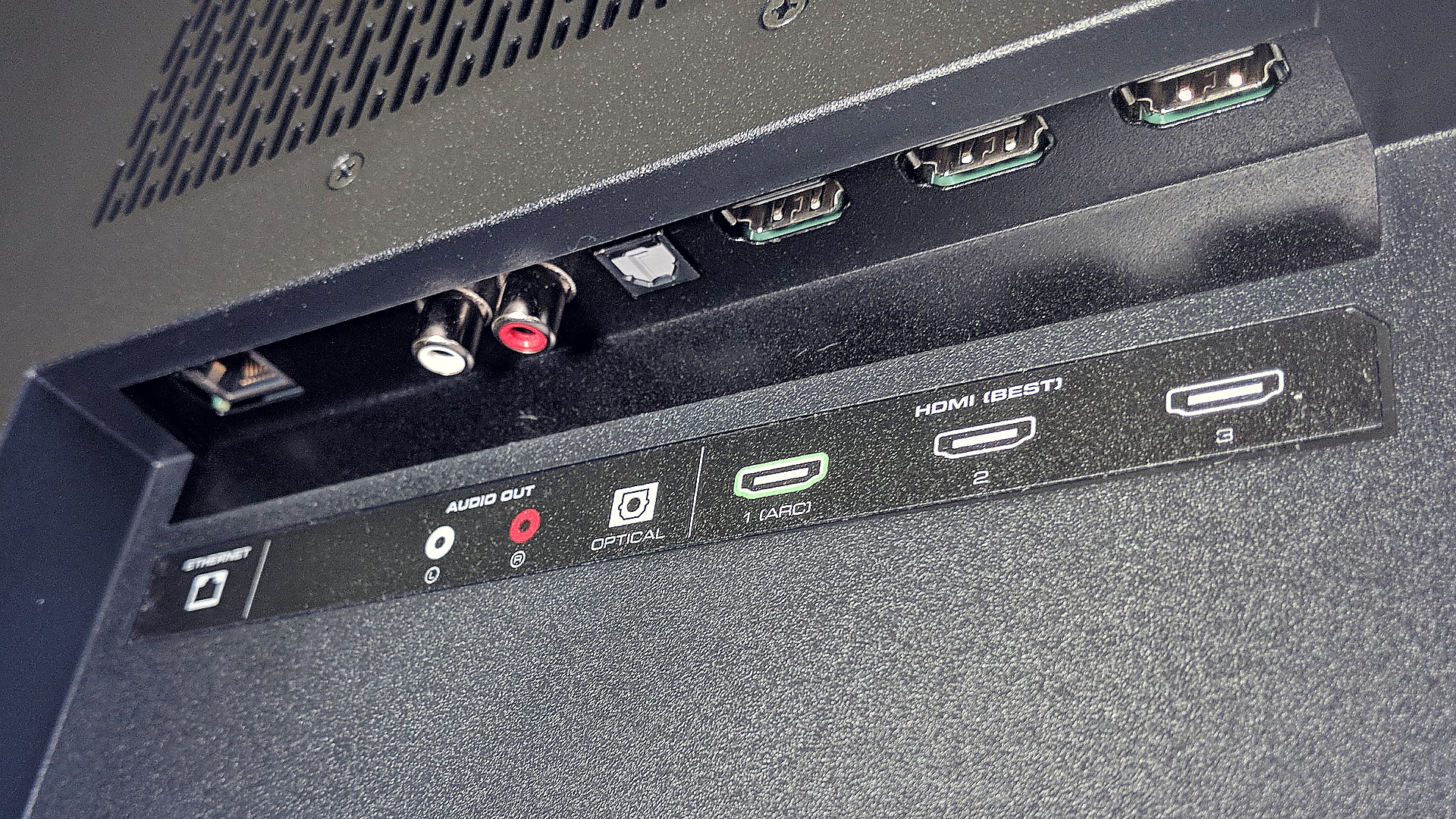 Similar to a computer display or traditional monitor, there are multiple inputs available, including 4 HDMI, 2 USB, 1 component, and 1 Ethernet. There are more than enough to connect a game console or two, plus a DVR.

We connected an NVIDIA Shield console, DVR, and PlayStation 4. This left us with an extra HDMI port as well as all other inputs. Depending on what sort of habits we’re in, we’ll often turn to the NVIDIA Shield because of its Google smarts and casting ability. Often we’ll turn it on so we can Cast our phone or tablet to the television.

Setup was incredibly easy, with a few menus to follow along. It took about as much time to take the monitor out of the box and set it up as it did to walk through the menus and configure to the network. The entire process is straightforward and intuitive. 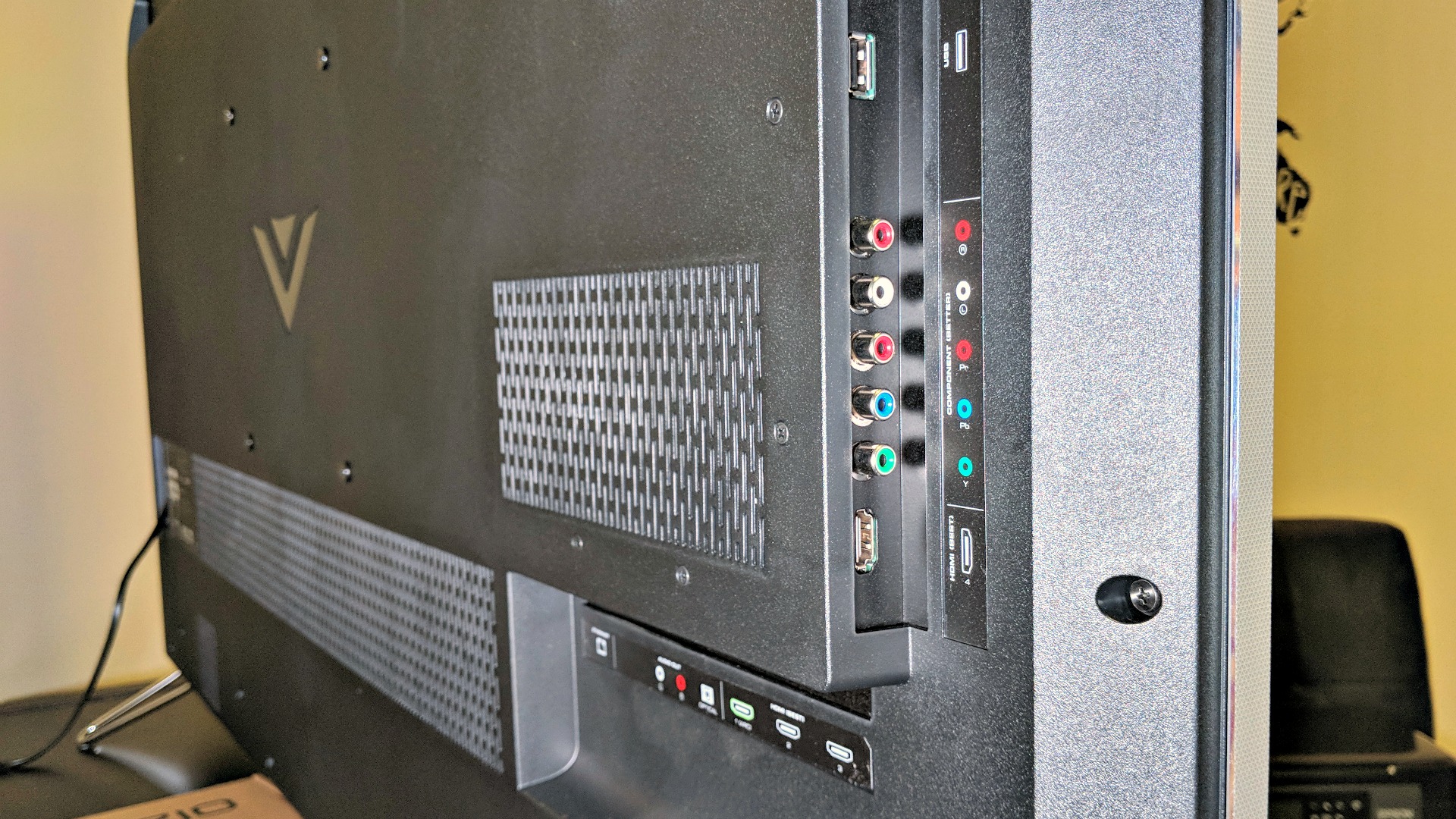 It did not take long for us to appreciate the ease in which we could start a YouTube video on our phone and send it to the Vizio. There’s a setting you can enable which will automatically wake the monitor up so you’re not fumbling for a remote or walking over to push any buttons. Quite often we’ll queue up a new episode of a show on HBO GO or Netflix and pass it off to the M50-E1.

We can’t speak to the absolute specifics of the TV and how it relates to other models on the market. There are plenty of great review sites dedicated to the cause (example) which can help spell out color contrasts, input lag, color gamut, and other fine points. As we were putting this together we looked around and found that the M50-E1 scored fairly well in most aspects and benchmark tests.

We can speak, however, to its quality as it relates to other units we’ve had around the home and office. This being our first Vizio we found it to be every bit as good as competitive models we’ve purchased in the past — and spent more money on.

The 1080p image is crisp with the 4K picture looking considerably better. Video games at that resolution, where applicable, look amazing on the Vizio. There was very little flicker in quick moving games or extremely busy images. 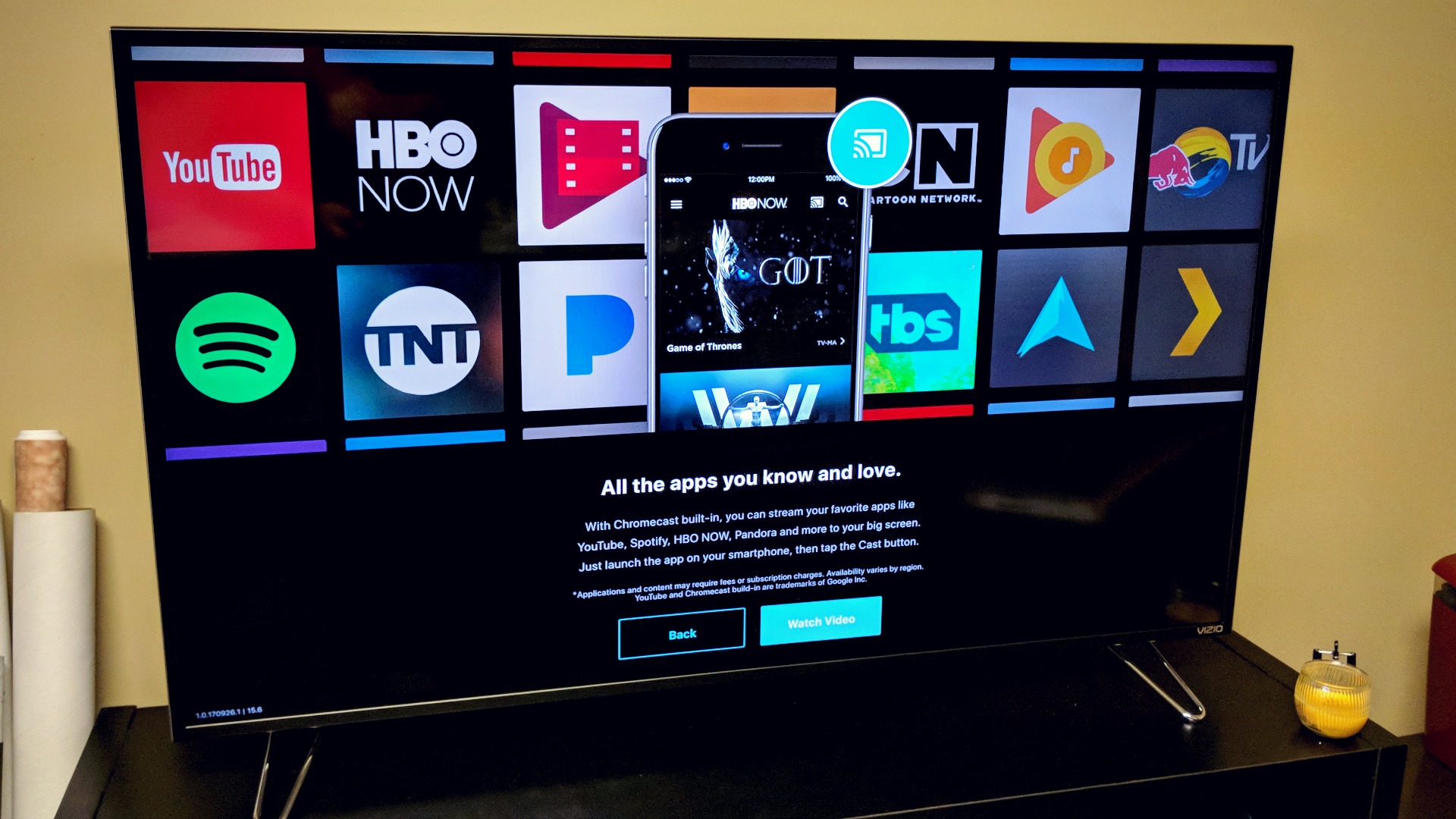 As for the color and overall range, we were really impressed with this unit. Thanks to support for both Dolby Vision and HDR10, the Vizio is equipped to deliver an extremely sharp, bright, picture with a much wider color range than what we’d get only a few years ago. Given these are two formats in an emerging battle, we like that Vizio doesn’t draw a line in the sand, allowing for both.

Some of the movies we’ve watched on this monitor were much more vivid than we remembered. It’s not unlike what happens when you compare a standard picture from a phone to one that can be captured by the likes of the HTC U11 or Pixel 2 using HDR.

The 120Hz refresh rate, while not as high as what you’ll find on the market, did well for scrolling sports scores, news tickers, and moving images. It wasn’t all that long ago that we were extremely happy to jump from 60Hz to 120Hz. Sure, down the road we may expect more from our sets but we’re okay with keeping prices down on models that do not have all of the bells and whistles.

Another example of this might be in having a curved screen. The M50-E1 is flat whereas the curve is becoming a standard in higher priced sets. We haven’t owned a curved unit, but we’ve spent enough time around them to appreciate what it does. Again, for us, in 2017, we’re okay with forgoing that feature in exchange for a lower sticker price.

Apps and other Smart Stuff

There are a number of pre-loaded apps on the Vizio M50-E1, including Netflix, Amazon Video, Hulu, Crackle, iHeartRadio, Xumo, Vudu and Pluto TV. But, when you factor in Chromecast, it becomes nearly endless. In all honesty, we tend to prefer the apps on our phones and tablets over those on the monitor. Casting is all too easy and we like the interface better.

For those of you who are existing Vizio users, you might be familiar with the SmartCast Mobile app. This monitor supports the app, which we found to be more fun and intuitive than what’s happening on screen.

There’s quite a bit going on in the SmartCast app, with the experience getting better when you own other Vizio products like a soundbar. Yes, it’s an ecosystem that tries to loop you in with brand affinity, but it’s certainly no worse than what Samsung and LG might do. 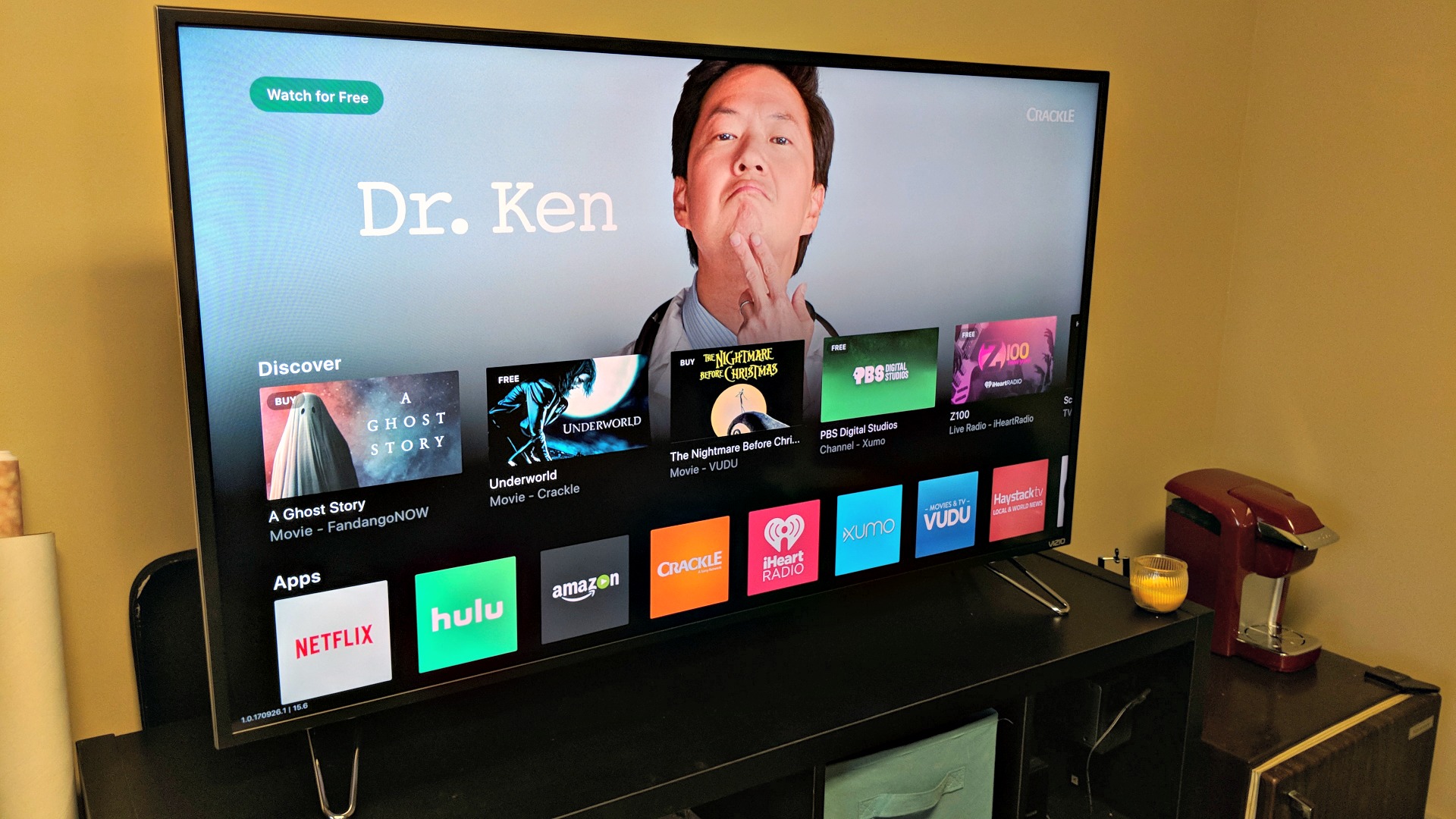 If you haven’t purchased a Google Home or something with Google Assistant built, you might want to consider doing so. Once you start to leverage the AI smarts you’ll find yourself talking to your TV way more than before. It makes sense to use in the living room, especially when you’re asking for things like how old an actor is or to play a specific show on a specific service.

The Vizio is ready to connect to your Home and tap into the smart assistant. Once you’ve downloaded a handful of apps you’ll find that you’re able to use the monitor in a variety of cool ways that your old television cannot. To be clear here, you cannot talk directly to the Vizio monitor as if it had Google Assistant installed. You’ll still speak to your Google Home or speaker with Google Assistant baked in.

Sound was on par with our expectations, but we wouldn’t necessarily call attention to it as a selling point. We’ve long wanted to get a soundbar or some better speakers for our television and the Vizio doesn’t do much to change the sentiment. It’s definitely good enough for average use, but we didn’t have any “wow” moments.

If you own some external speakers or are considering them for your next set, you’ll want to add them here. The RCA output and Digital Audio Out (SPDIF) open the door to pretty much anything on the market.

The 50-inch unit replaced our older 1080p HD 55-inch Samsung and we’ve not missed that five inches of screen. We were happy to trade off the display size for Google intelligence and a 4K picture.

We found that the internal Chromecast and Assistant was more than simple convenience. In fact, we’re at a point where we could probably unplug the NVIDIA Shield and not miss it in the living room. Truth be told, we’d probably move it to another area of the house where we can relegate it to gaming.

Given the features and options in the Vizio M50-E1 we have no reservations in recommending it for the suggested retail price of $599. In fact, as we were finalizing our review we saw it listed for $549 on Vizio’s website with free shipping. That is a fantastic deal to us.

You can find the M50-E1 at a variety of retailers and their respective websites. Among them are Best Buy, Walmart, B&H, Dell, Costco, and Sam’s Club. As of right now it appears that most of the vendors are offering it at the same $549 cost, or slightly less.