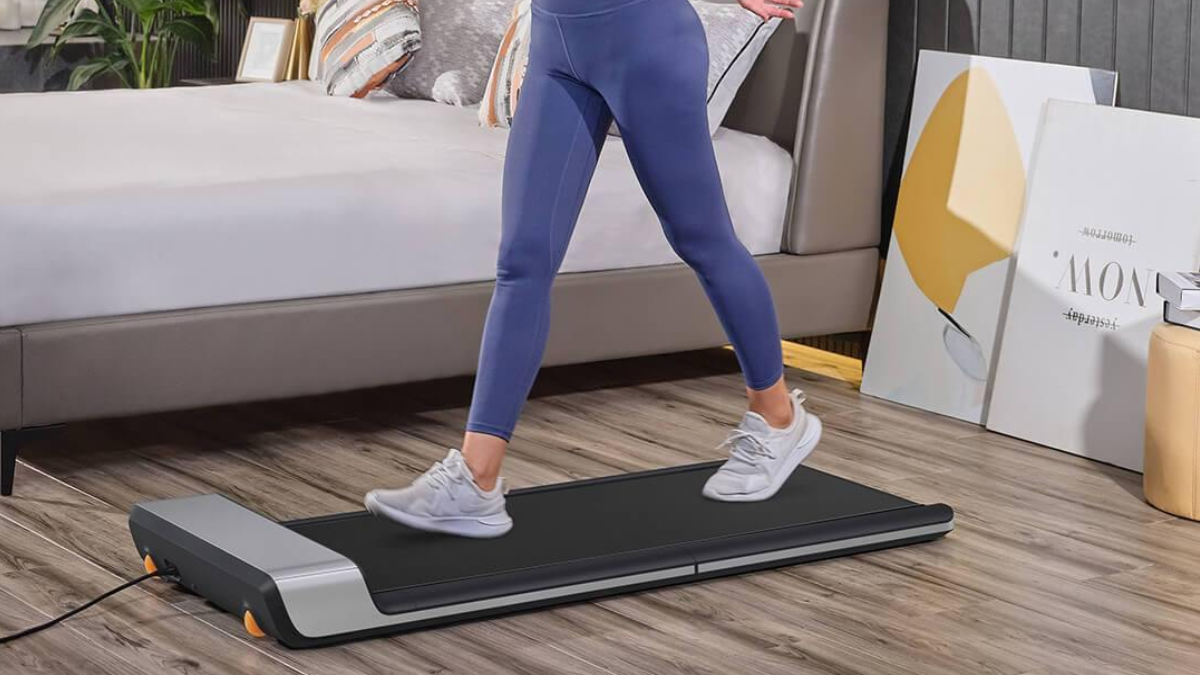 For all the bad that came with the pandemic, it did fast track a few things that needed to change. Working from home, for instance, became more universally accepted; many businesses were forced to adapt to in-house employment and remote work.

Almost overnight a lot of people found themselves having to scramble for office space, replace chairs and desks, or adjust their routines. What does the “new normal” look like for people who no longer head to a shared environment or have the opportunity to visit a local gym? Or, what if they just want to avoid a crowded space until things slow down?

And as we’ve found, health and wellness has become more important to a lot of folks. How do we deal with stress management, diet, fitness routines, and sleep when everything is so messy?

Much like video game consoles, walking pads are one of those product types that have done quite well in the pandemic era. They take up less space than a traditional treadmill, often fold in half, and can generally slide under a couch.

While they might not be as feature rich as a standard treadmill, they come in with lower price tags. And thanks to their portability, they can go from a closet to under a standing desk in a matter of minutes.

The WalkingPad P1, priced $450 at Amazon, is an aluminum pad designed for walking and jogging. It weighs in around 66 pounds, folds in half, and moves about rather easily with built-in wheels.

When the WalkingPad P1 arrives, it’s folded up and in a box that clocks in a shade under 70lbs. You may want to have someone on hand to help you bring it into the home or take it out of the box.

Similar to other treadmills and pads, there’s a power cord of around six feet; you’ll want to find the spot where it will go and consider whether that cord will reach or if you’ll need a surge protector/power strip.

You can fold up the WalkingPad P1 without much effort and tuck it out of the way. If there’s a spot next to the desk, on the far side of the couch, or in an empty closet, you’ll be able to move it to and from without straining yourself.

Generally speaking, the WalkingPad P1 is easy on the eyes with somewhat of a minimal design. The silver looks good in pretty much any room.

One of the first things we noticed about the WalkingPad P1 was that it does not have a digital readout or display. This wasn’t much of an issue for us as it comes with a remote control that shows the elapsed time, distance, and pace. Besides, who wants to look at the ground and potentially get dizzy?

For me, I like placing the walking pad under a standing desk and putting in a very light pace while working. Keeping the remote control on the desk for a quick glance, I just get on and get going.

If I am being transparent about how I want to use it, I care more about just moving when I would otherwise be sitting. I don’t care all that much about metrics, history, or quantified goals. To that end, I appreciate the simplicity of getting on, starting up, and finding a good workable pace.

The remote control has just a couple of buttons and it does take a short bit of time to fully understand. Hit the start/stop button to see the display; hit it twice and you’ll stop the belt. If you’re like me, you might find this out the hard way once or twice.

When using the WalkingPad P1 we found that it was quiet and sized perfectly for under desks or walking in the middle of the room.

You’ll start out slow at 2.5km per hour and walk 1 kilometer before opening up to the “Automatic” mode. Once enabled, it speeds up and slows down based on your position on the pad.

Walking in the middle of the treadmill keeps things nice and steady but moving closer to the front will speed things up. Similarly, allowing yourself to slide back and walk near the rear will slow the belt down. This is a handy way of controlling things without reaching for a remote or app.

Although there is an app available in the Play Store, I didn’t find myself using. For one, the reviews I read suggested it wasn’t that great. Additionally, I was more than happy to just use the remote control to get started. Once going, I leave things largely alone.

I’ve really come to enjoy having the WalkingPad P1 in the office. While I don’t use it as often as I intend to, I appreciate that it makes standing at the desk more enjoyable.

When folded up and tucked in the corner it does take up a fair amount of space, but it rolls easily and would otherwise slide under a desk or bed. Were this at my home and not the office, I suspect it might feel less “bulky”.

I like how quiet the WalkingPad P1 is and how easy it is to get going. It’s a nice alternative to a full-blown treadmill and a great way to add a bit of activity to an otherwise passive day of work.